Idea Lab | Is it Possible to Make Transcendent Risotto at Home?

And: Should Risotto Spread? 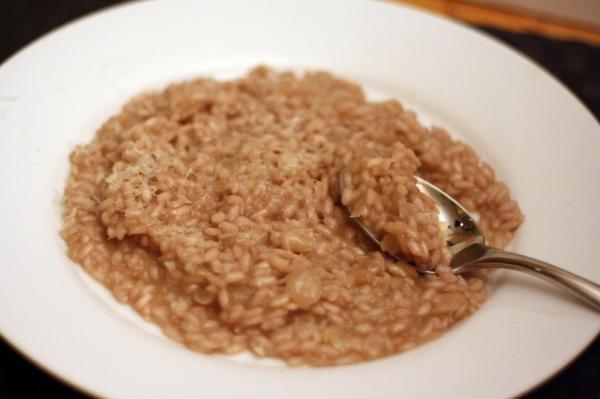 If you’re a Top Chef junkie like me then you probably remember that Tre got kicked off episode 8 this season after serving a risotto that didn’t “spread.” At least, that’s what judge Tom Colicchio said. It’s always hard to know exactly why contestants are booted off the show when you can't taste the food, but this was one of those cases where you could visibly see that his risotto sat up in a bowl like mashed potatoes. “Of course he should go home,” I thought, “His risotto didn’t spread!” But then I wondered, “Hey, doesn’t my risotto sit up in a bowl like mashed potatoes? Have I been making risotto incorrectly for the past five years?”

I don’t usually have inner monologue issues with risotto, but it bugged me because I’ve been making it for so long. Risotto is one of the very first dishes I ever wrote about on this website , and it’s been a staple ever since. It’s cheap, easy, and almost always satisfying, as long as you buy the right rice (usually Arborio, though a few other work), add the stock slowly, and stir occasionally. But can risotto reach some sort of transcendent perfection ?

I’ve had perfect risotto exactly once in my life. During a media event at Spiaggia , I was served this risotto course that was so unexpected and dynamic, it shattered my impression of what risotto could and should taste like. It was spread on this small shallow plate, and each grain of rice was distinct and al dente like pasta. The sauce was creamy and full flavored, but it was still the rice that were the best part. I polished the whole dish off in a matter of seconds, and kind of thought about asking for seconds. Instead, I vowed to try and make it home, even if I figured that it was just something that only great chefs with insane kitchen staffs could pull it off. Then I got lazy...

Tom Colicchio’s crack on Top Chef not only reopened the topic, but it shamed me into action. Because what he was claiming was not only that truly exceptional risotto spreads, but that all risotto should. Basically, if it does not act like this, then you are up for elimination.

So what steps should I take to make execptional risotto? Different kinds of rice? Strange methods? Can anyone help me out?!!