From Bone Marrow to Saffron 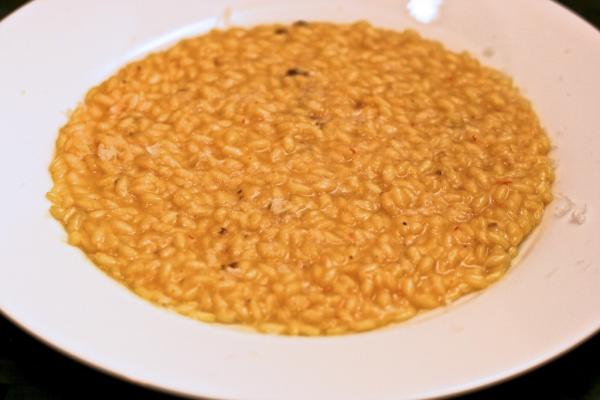 Learning how to make risotto at home was one of the more liberating experiences of my early culinary career. The idea that I could create a perfectly legitimate risotto by just buying arborio rice and stirring like mad, was enough to make me wonder what else I couldn’t cook. I’m not going to say it single-handedly helped launch this blog and my writing career, but it was crucial. It was the moment that I looked around the kitchen and wondered what else I could create.

Fast forward six years later, and I am still making risotto in roughly the same serviceable manner. It’s dependable and comforting, but it was starting to pale in comparison to versions I was trying around Chicago. Specifically, the ethereal, nearly perfect version I sampled at Spiaggia , where each grain of a rice was distinct and al dente, and enveloped in this creamy sauce that was rich and also incredibly complex. So...could make this incredibly good version of risotto at home?

Instead of rushing through the process, I decided to slow down a pay attention to every single detail of recreating the classic Risotto alla Milanese. The Northern Italian specialty adds a pinch of saffron for its disctinct yellow tint. Without patting my own back too hard, I came close here, and it turns out that all you need is some good rice, lots of bone marrow, and a good mild stock. 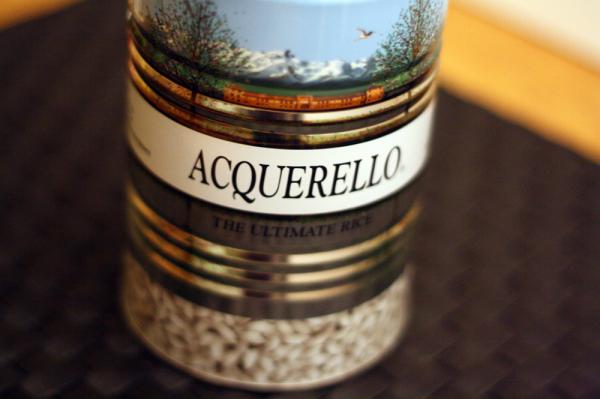 If you try to make risotto with regular long grain rice, bad things happen. Everyone knows this. The results come out mushy, sticky, and completely unappetizing. That’s why just about every risotto recipe calls for the use of Arborio rice. It’s smaller, and more compact, and nearly ubiquitous in risotto preparation. But there are some who think that there are better varieties. 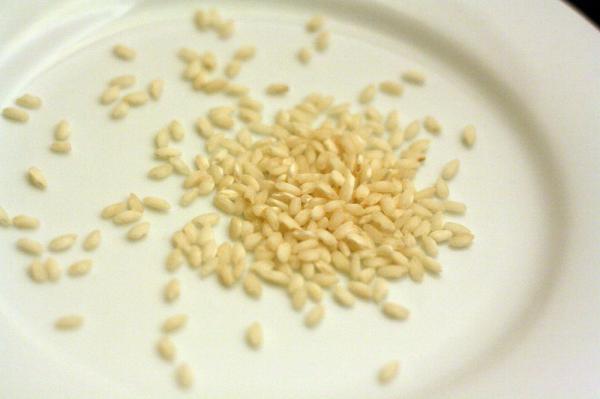 Namely, my favorite Italian food supplier, J.P. Graziano’s recommended I go with the Carnaroli variety. It’s kind of stupidly expensive, but it just so happens to be the same kind that Spiaggia uses to make their version. I had to have it. 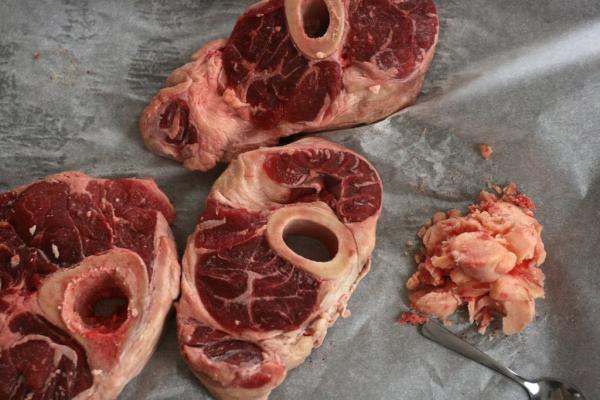 The moment I knew I had to retry risotto at home was when I watched Lidia Bastianich make her version of Risotto alla Milanese on her cooking show, Lidia’s Italy on PBS. We’ve actually tackled this Italian classic before , but there was one ingredient that set her version apart. Instead of simply using butter or olive oil, she added a scoop of beef marrow to the pot, which sounded like the most hedonistic and delicious thing one could do for a risotto.

Of course, now that I was spending loads of money on rice and bone marrow, I couldn’t simply open a can of stock and call it a day. So I got a bunch of chicken scraps and made a rich chicken stock. Unfortunately, I came across this article by Craig Camp on eGullet that claimed that a rich chicken stock was actually a horrible idea, since the stock was going to reduce heavily over the cooking process. His recommendation: a lightly flavored beef broth.

The idea made sense. You reduce the liquid so much while making a risotto, you want something that wouldn’t become too concentrated and distract from the flavors of everything else. It takes time, but it’s really easy. Just buy a huge hunk of cheap meat, a few vegetables, and simmer slowly for four hours.

There is a perverse fun in all this, I’ll totally admit. Tracking down the rice, the meat, the and bone marrow required way more time than I’ve ever spent on risotto combined. But, as I mentioned above, it was astonishingly good. Really. It wasn’t quite Spiaggia perfect, but it was great is better than good. And all of these steps help make risotto a little more special.

I think a lot of the reason is the rice, which just has a different texture than arborio. To be sure, this ain’t a light meal. The dish glistens in the light thanks to the bone marrow, olive oil, and butter. Next time I’ll probably get rid of the bone marrow. But it depends on the my mood, I suppose. I’ve certainly never made a risotto quite this good before in my kitchen. That has to count for something. 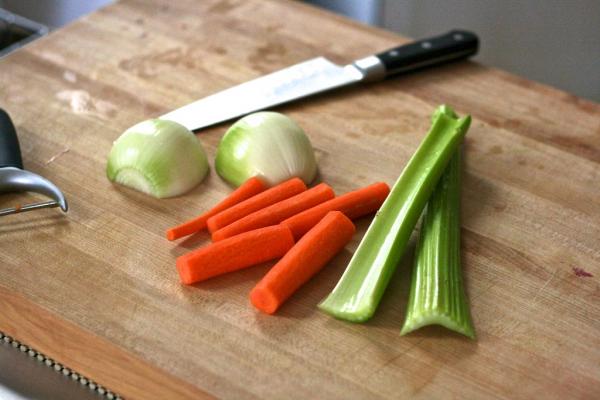 Add carrots, celery, and onion to a large pot, which fits at least 6 to 8 quarts of water. Fill ¾ of the way up with water and bring to a boil over high heat.

Then add the chuck roast. Return to a boil, then reduce to a simmer, loosely cover, and skim any scum that comes to the surface.

Simmer gently for two hours. Then add one tablespoon of salt. Continue to simmer for four hours. Remove the meat and use for another purpose (like sandwiches!), and then strain the stock into a new bowl to remove all the vegetables. Discard the vegetables.

Pour the stock into a large pot. Place it over medium-high heat, and keep it very hot while you cook the risotto. Reduce heat if it comes close to a boil 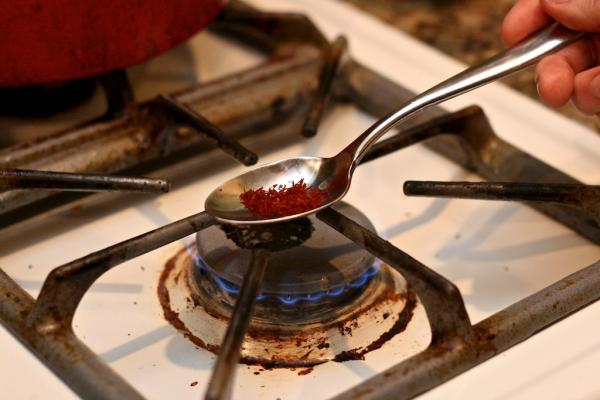 Toast the saffron. To do this, place it in a metal spoon, and set it over a low flame and toast it until it is aromatic, which takes only a few seconds. 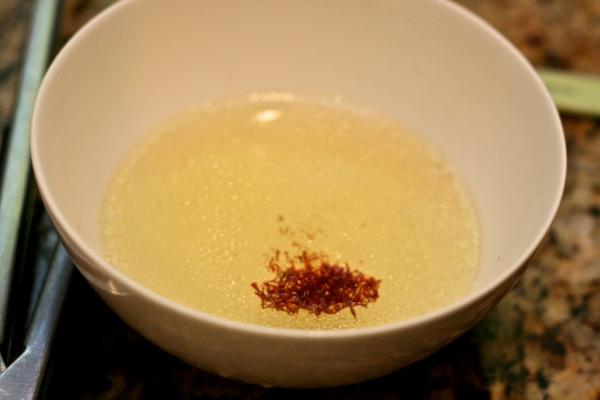 Place in a bowl, and cover with ½ cup of stock. Set it aside.

Scoop out the bone marrow with a spoon. Roughly chop it. There should be about ⅓ cup total. If you have more, then set aside for some other awesome dish. 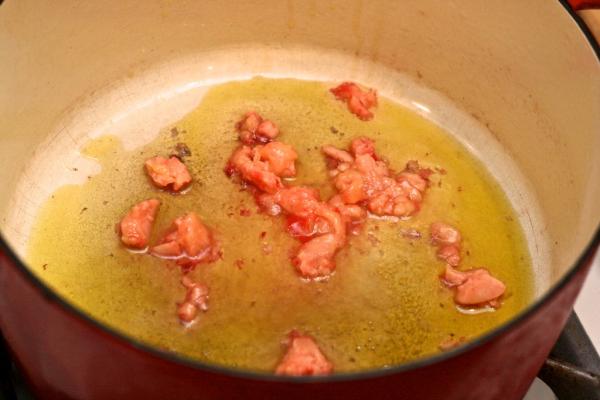 Toss the marrow into a large dutch oven. Add the olive oil and turn the heat to medium. 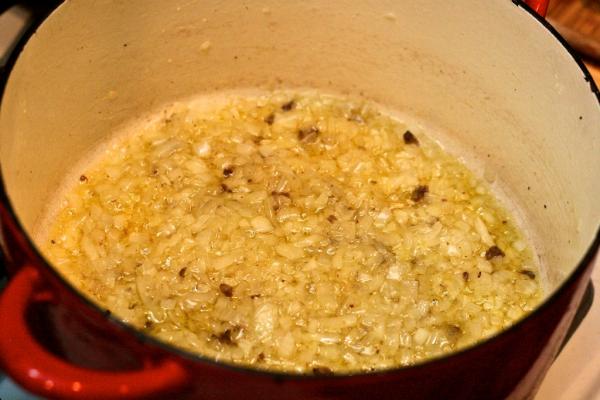 When the marrow melts, add the onion and one teaspoon of salt. Cook the onions, stirring occasionally, until they are wilted and soft, but not browned. 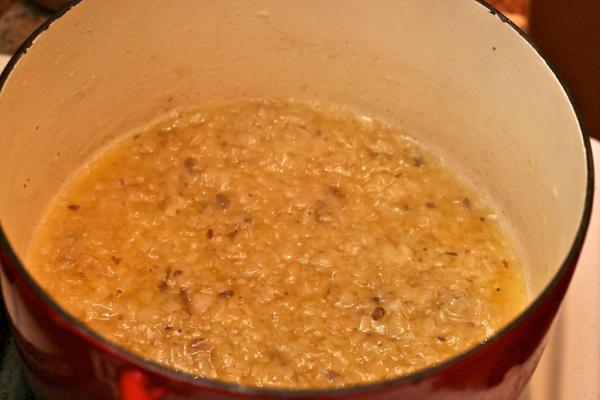 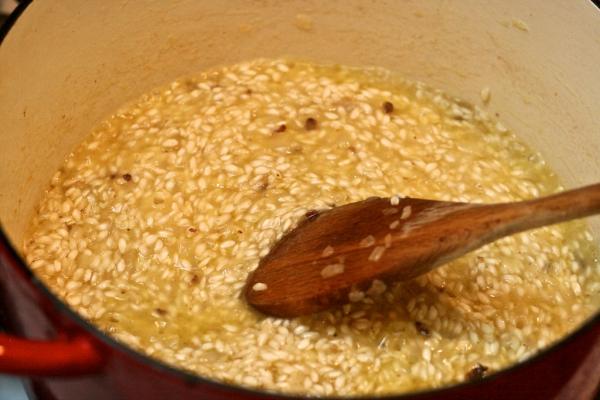 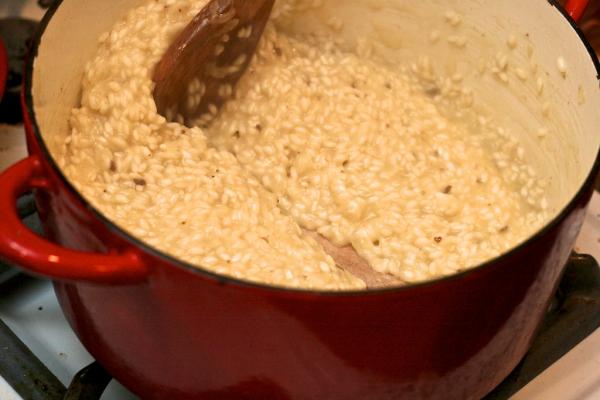 Ladle in two cups of the stock. Stir constantly until the liquid is absorbed. When you can see the bottom of the pan while stirring, add two more cups of stock and ½ teaspoon salt. Continue stirring. 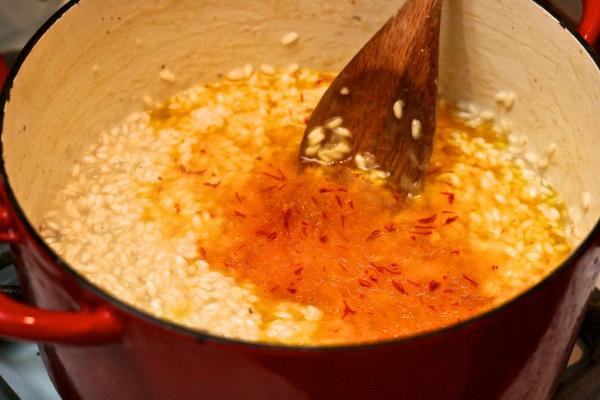 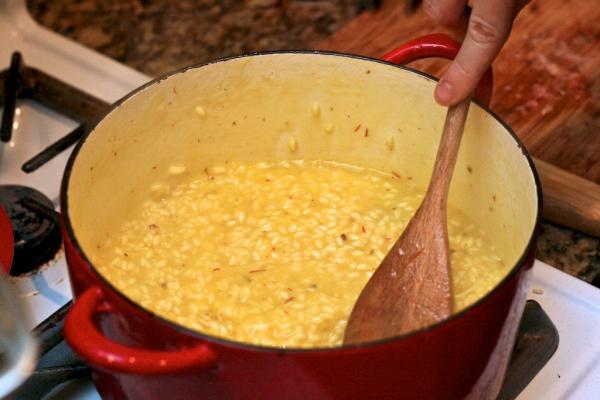 I had to add another two cups of stock. Continue stirring! 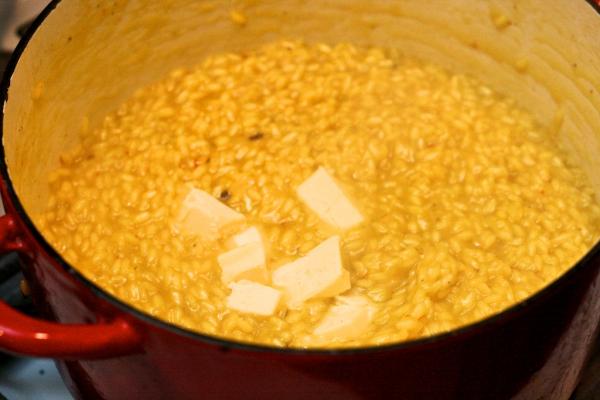 When rice is toothsome and not completely tender, turn off the heat, add the butter, and stir well. Then add the cheese and stir again. 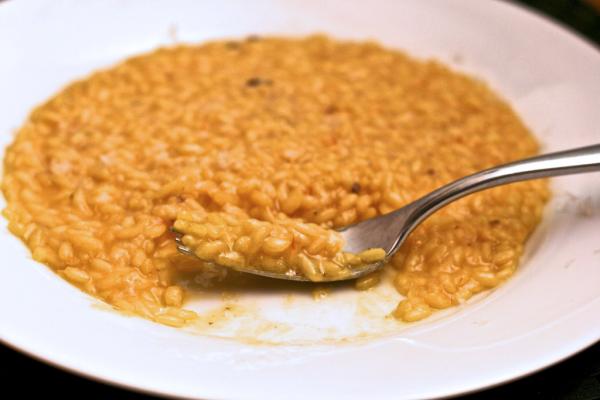 Serve the risotto with more grated cheese to taste.