The Proper Way to Cook a Hot Dog?

A nice technique for cooking hot dogs at home.

By Blake Royer I hardly ever cook hot dogs at... 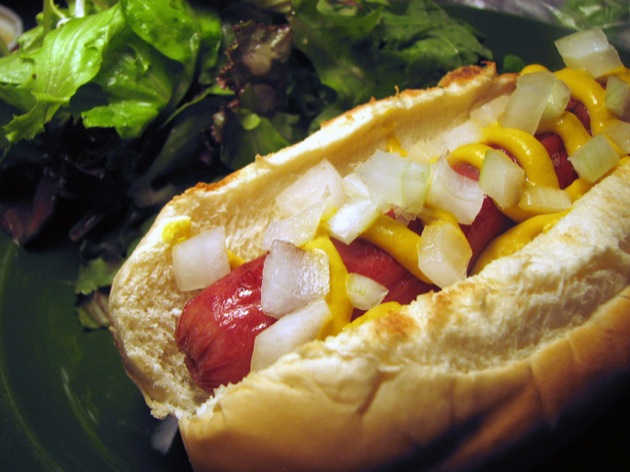 I hardly ever cook hot dogs at home--it's the kind of food that I buy on a street corner in a rush.  On the way to a concert. When I don’t have more than 5 minutes for lunch. When it’s three days before my paycheck and rent's due.  Two bucks on a street corner, less than that if I'm lucky to be near a Papaya King (or Gray's Papaya ), where they’re cooked on a griddle and have that distinctive "snap" when you bite into them.

I decided at some point that boiling a hot dog is not worth it.  Actually, I try to avoid the typical hot dog street vendor--affectionately or called the " dirty water dog " vendor--who serves the squishy version pulled out of gray, flat water, tossed into a bun still dripping, topped with mustard and a tongful of wet sauerkraut (or ketchup-simmered onions).  I'll still eat them in a pinch.  I just prefer a hot dog to have a little more char and plumpness.

Actually, char and plumpness is an elusive combination.  When you boil them, they’re plumper but tend to be soggy and lacking flavor.  When you grill them, they can char too quickly and often seize up, becoming firm.

Is this too much rumination on the cooking method of a hot dog?   Considering that a hot dog is one of the most inexpensive meals possible, I figure it’s worth thinking about.  So it was something of a revelation when I saw a good friend pull the following stunt, producing a crispy, robust dog with plumpness to spare. 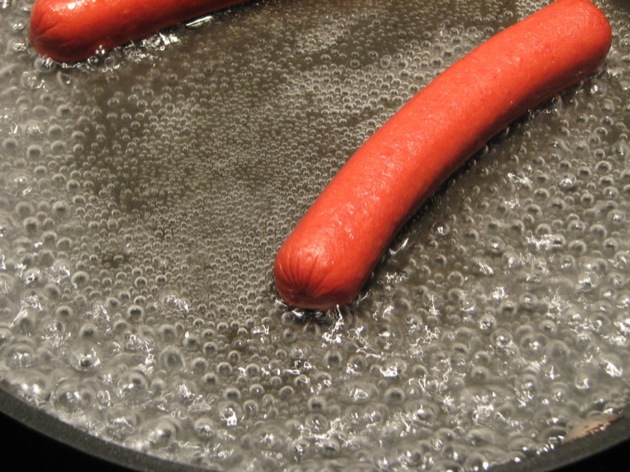 First, add a little water to a skillet, just enough to barely cover half the pan.  Heat it up until it begins to steam off, then add the hot dogs.  Allow them to steam as the water boils off completely--I’m told that this pulls some of the salt out.  You may need to tilt the skillet and drain off the last tablespoon or so. 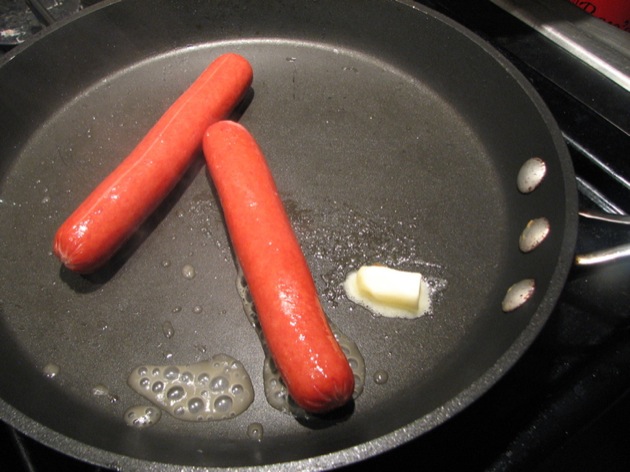 Next, add a tablespoon of butter for each dog.  Because, why not .  The hot dog will begin to blister and turn all sorts of savory colors.  In the meantime, toast your buns.

I like mine with mustard and chopped onion.  I like it even better Chicago-style , a.k.a. “dragged through the garden,” i.e. with celery salt, onions, tomato slices, relish, mustard, peppers, and a pickle spear on a poppyseed bun. But I didn’t have all that goodness lying around, and besides, lots of chopping and arranging seems like too much effort when you’re just cooking a hot dog at home for a fast meal.  Those things taste way better when someone else makes them.

Just don’t put any ketchup on it —or at least don't tell any Chicagoan that you did.