The Strange Appeal of Vinegar in a Cocktail

Taking the balance in a whole new direction 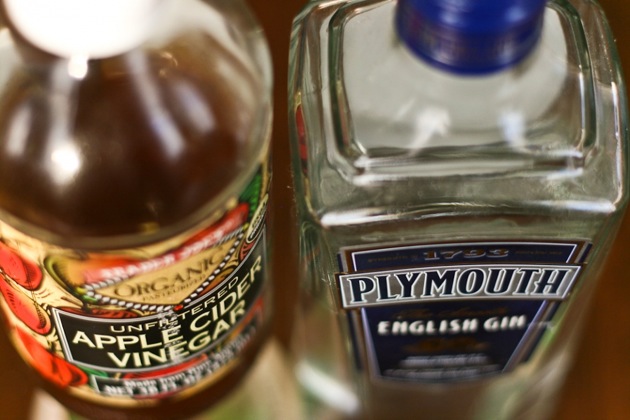 Do they belong together?

Most cocktails have too much sugar in them. I'm not sure when the barrage of overly sweet cocktails began (not to mention the tradition of putting mini umbrellas in the glass), but it leaves me with a stomach ache. Unlike the bracing experience of an Old Fashioned, possibly the first cocktail to be invented in a dusty bar in the 19th century, a succinct, aromatic sip that slowly grows on you, most cocktails these days go down like a soft drink. Sugar is the easiest way to make alcohol palatable for those who don't really like the taste of it. Which is incidentally probably why vodka is so popular. Because it doesn't really taste like anything.

Thankfully, cocktails are rapidly becoming more nuanced, especially as old classic recipes are uncovered, like the simplicity of a real margaritas made with tequilia, lime, and triple sec instead of a super-sweet mix or something frozen from a slushee machine. The old recipes have stuck around because they're carefully made and above all, balanced.

Balance in a cocktail is probably the most important quality, and bartenders that are creating new recipes always have it in mind. Not too sweet, not too sour, not too hot from the alcohol--those are the general parameters. Which is why I was really intrigued recently when I arrived at a party and was offered a gin cocktail with my choice of...vinegars. Unable to resist, I found myself holding a concoction of gin, honey, brewed tea and (if I remember correctly) apple cider vinegar. It shouldn't have worked. It was the antidote to a Sex on the Beach. Who in their right mind would order a cocktail containing vinegar?

But soon it all began to make sense (which might have been the alcohol kicking in-- but it also has some logic behind it). Vinegar seems like sugar's enemy. Harsh, sour and unwelcome. But sugar and vinegar can be very good friends if they play along. Like in the gastrique reduction I recently wrote about, the combination can work wonders in a sauce.  It's very simply demonstrated in one of the first desserts I learned to make (from a very attractive Spanish man , in fact).  He cut up strawberries doused in a bit of sugar and a drizzle of balsamic vinegar. After a few hours, they softened and become complex, deeply flavored, and delicious.

Sugar and vinegar balance each other when combined in the right proportions. They are in this infinitely adaptable cocktail recipe, which was inspired by a spirits tasting at Provenance in Logan Square featuring Death's Door Gin and a bartender from The Whistler, Paul McGee. So I quickly scrawled down the recipe from my friends who were there and saved it; there are lots more interesting recipes on their website .

It's not for everyone, the vinegar cocktail. But it's one of the more intriguing drinks I've recently had.

In a cocktail shaker, stir the last three ingredients well to combine.  Add the gin and plenty of ice.  Shake and strain into a chilled glass.