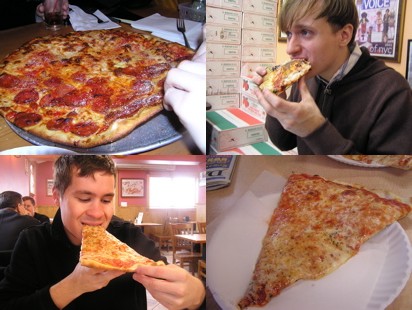 Even the U.S. Government admits that pizza may be the perfect food.  It is a balanced food pyramid and a near-faultless symmetry of tastes: fresh but robust, light yet filling, sweet and tangy and creamy, salty, crisp yet chewy, a literal circus of flavors interacting and reaching equilibrium.  Here's the idea: living in New York, we've become pizza-obsessed.  As each slice we taste aims for the mark of balanced ingredients, we have become by turns excited, discouraged, and hopeful.

New York City hosts many of what are considered the greatest pizzerias in the country, starting with Lombardi's in 1905.  Familiar with only a few of them, we sailed (and subwayed) to every borough in search of truly transcendent pies, asking along the way, “Is it worth the trip?”  In most cases the answer was yes.  In one case, the answer is “yes, if you live anywhere in North America, get on a plane now.  You will never look at pizza the same way again.”

Our quest quickly became a search for perfection.  We sought individuality, inventiveness and inspiration.  We wanted to understand what made a few the best and what so many average.  Like any search for balance and even perfection, it became philosphical and spiritual: great pizza was close to godliness and average pizza was ever-present, a burgeoning baloon threatening eclipse. Pizzerias claim their own section of the Yellow Pages in New York, and exist two or three to a block. Here's the point: pizza is imperiled by a proliferation of competence.

We were aided along the way by some trusted guides: Ed Levine's excellent book Pizza: A Slice of Heaven ; the devoted pizza website Slice ; and a no holds-barred investigative food article by Jeffrey Steingarten .  But we relied mostly on our taste buds.  Nothing was more paramount than the taste.  We dissected pizza, thought about pizza, talked about pizza--it turned into a righteous quest into every borough that has taken over our website.  Welcome to Pizza Week at the Paupered Chef.

Every day this week we will publish pieces of our five-borough tale, culminating in our own failures and successes at bringing the magnificence of this food into the home kitchen.