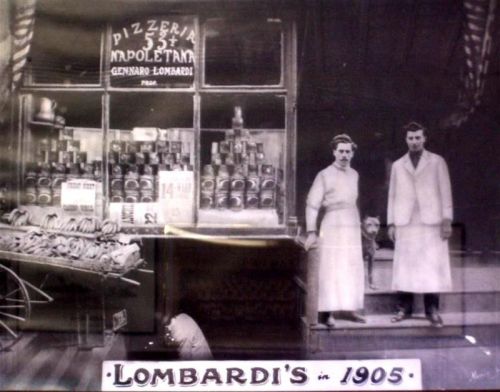 Lombardi's.  The torch-bearer of New York, and even American, Pizza.  The ambassador, and the original.  Any right quest to find the best New York pizza must start here.

We are not too interested in lore, but here you go: the original was created in 1905.  Though there are claims that many Italian breadmakers were creating pizza pies with their leftover dough up to ten years before, Lombardi's got the first license, the offical status.

Though the pizzeria was closed for some time, it reopened in 1994 at a new location, where a 1905-era coal-heated brick oven still existed.  Owner John Brescio, who grew up in Little Italy, was friends with the original Lombardi's grandson.  After learning the blood-line secrets and discovering the brick oven (which was plastered over), he opened the pizzeria down the street from the original location, inheriting the name and a claim to the 90-year old Lombardi special touch.

Without a doubt, every pizzeria in New York owes something to this Granddaddy of Neopolitan-American Pizza, that American translation of the original Naples classic: thicker, chewier, denser, cooked longer, smothered in tomato sauce, topped with lopped-off fresh mozzarella, olive oil poured on top, freshly torn basil thrown over immediately after cooking.

Half the event of going to Lombardi's today is trying to guess how long it will take to get in.  The restaurant is relatively large for New York standards, and the turnover fairly quick.  But at 7 o'clock on a Saturday night, the line stretches out the door and onto to the streets.  Hoardes of unknowing tourists wait, staring inside the window at the lucky few.  Large, bubbling, gently charred pies are served on brighly polished metal trays, the red-white checked tablecloth cliche in full swing.  Outside on the street, disgruntled females demand that they leave.  "You can get pizza anywhere!  Why are we waiting here?"  People get quiet and withdrawn.  These are the travails of hyped-up pizza.  Everything is happening inside.

Lombardi’s is a tourist-experience eccellente , and to the uninitated pizza fellow, it can be revelatory.  Our own experience came early on when we had recently moved to New York, and took out-of-town guests for their first New York pie.  Though we'd heard of far-off distant lands (Brooklyn) that held pizza treasures beyond human imagination, we had been off the island just a few times, and Brooklyn, that boundless borough of trees, homes and neighborhood churches, seemed risky.  Straying from downtown, and venturing into the unfamiliar, wasn’t what we wanted to do with a couple out-of-towners, especially considering that we were, for all intents and purposes, still tourists ourselves.

Without a doubt, every pizzeria in New York owes something to this Granddaddy of Neopolitan-American Pizza, that American translation of the original Naples classic: thicker, chewier, denser, cooked longer, smothered in tomato sauce, topped with lopped-off fresh mozzarella, olive oil poured on top, freshly torn basil thrown over immediately after cooking.

And our two pies--plain cheese and black olive--were quite good.  We fear, however, that it wasn’t the deeply satisfying, historically significant (historically for pizza, historically for our personal pizza lives) experience we had hoped for.  The crust was too thick as to distract from the ingredients, the service was less than stellar, and considering the obscene size of the restaurant, the quality control was lacking.  There, we said it. Lombardi's is overrated.  Granted, it certainly is an important institution.  But that's just the problem.  We weren't looking for an institution, a place where every tourist family goes first, Time Out guide at arms length leading the way.  While it is for certain one of the better pies to be had in New York, we decided we were going to have to look a little harder and travel a little further to find our truly extraordinary experience.

Of course, we did.  Tomorow we'll tell you about it.