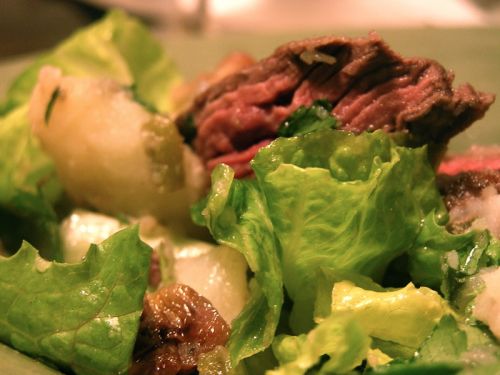 Food photography is an obsessive business.  Pictures are alluring, appetizing, what make somebody want to try the recipe.  There are times when, obsessed by lighting, aperture, and focus, we forget about the actual eating part.  Look at that piece of meat.  See the grains?  Looks good, eh?  Trust us, it was succulent.  There's nothing quite like a warm salad in the winter, sharp, crispy greens balanced by a robust grilled meat or a roasted vegetable.  While this seems an odd combination of ingredients, it works remarkably well.  By the end of the meal we both were scraping the excess potato salad out of the mixing bowl with greedy fingers.   Don't worry, they were clean.

At best the pictures help your imagination run wild with thoughts, suggestions, and good hopes to the awaiting feast.  But that's not always the case.  Here we will tell you the story of how food photography invited us, rejected us, then invited us back into the fold.  And we'll tell you how to make a very intriguing "warm" salad that tasted better once it cooled.

The success of this recipe came out of failure.  The other day, against the better judgment of Joelle Hann , ourselves , and common sense, we tried our hand at a "basic" lamb curry dish out of the glossy BBC cooking magazine that Blake picked up off a coffee table in Oxford.  Why?  Part of it was the chipper British English, part of it that the dish supposedly took under 20 minutes and used simple ingredients that we had, and the rustic picture looked scrumptious.  We thought, "We'll eat a heart yum curry and not even have to pay our dues stirring for hours, or have to buy funky, random ingredients."  I was sold the minute the picture for basic curry recipe was shoved in my face.  That is, until I actually had to hold the curry we cooked up to my face.  It tasted like cumin stew.  Not so good.  We failed at making curry, completely.  And the picture of it isn't even worth showing here.

The next day we retreated back to a reputable friend, Rick Bayless and his Mexican Everyday .  While most of his recipes are accompanied by a rather nice photo, the one we picked was apparently an off page, not deserving of the photographer's time.  No photo, no idea how the recipe was supposed to look.  The blank canvas was ready for us to mess about with.

We started with his "Roasted Poblano-Potato Salad with Flaked Tuna," and slowly adapted the recipe to fit our various wants.  I wanted a salad.  Blake didn't want the canned tuna, having eaten it for lunch.  We both were interested in steak.  We couldn't find poblanos, so we went with a green bell pepper and a couple jalapenos.  We started to see the dish as we had planned it, and it was kind of a liberating feeling.  Bayless is great at giving a framework allowing for "riffs", as he likes to put it.

Trust your gut and the impulses that come along, but follow the advice.  When we mixed all the ingredients together the aroma wafted over the apartment and we dug in before it had time to cool like Bayless had suggested.  It was fine.  All the ingredients were good, but the whole seemed to be less than the sum of its parts.  The sweet green peppers were lost in the salad. The dressing wasn't discernable on the lettuce.  The flavors didn't meld. But for some reason, as the dish cooled off, the flavors opened up.  We added more olive oil to bind the parts together.  The acidity of the lime became apparent, the juice from the steaks mixed with quick spice of the jalapenos.  As the dish finally got closer to the room temperature that Bayless recommended at the beginning, the more voracious our appetite became.  We started to taste the onion infused dressing on the lettuce, and the humble red skin potatoes started to soak in the complex spices.  That's the exact moment when we dipped our fingers in. 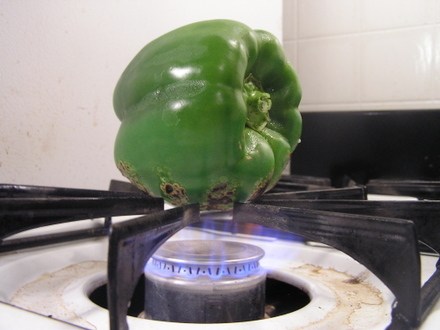 Wash the pepper and grill it for until it is completely blackened.  Those with a grill are blessed humans and should take full advantage.  For those of us with gas-burners, just plop it in the middle of the flame and turn it every minute or so.  Watch out for the steam; it likes to catch on fire.  Once everything is glorious, remove and place in a paper bag for 5 to 10 minutes until it can be handled. 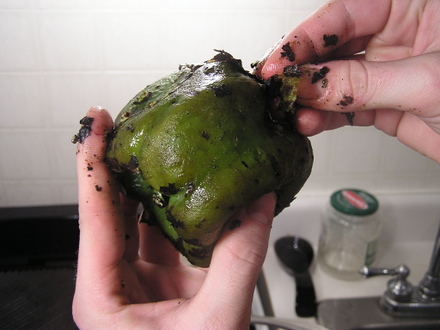 Once you can handle it, start removing the blackened parts with your fingers.  If you have cooked it long enough it should slide right off.  When most of the black is gone, remove the steam and seeds and cut into small strips. 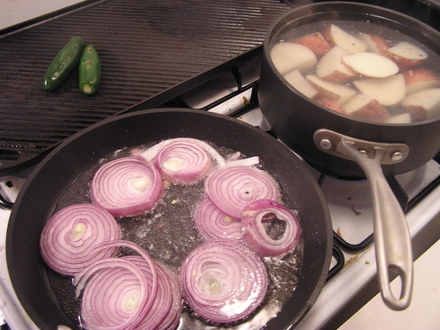 Chop the red potatoes into small hunks and boil them for until tender.  It will take between 10 and 15 minutes.  Thinly slice a red onion and place it in a pan with the oil.  We also decided to grill some jalapenos.  They take a while, so while I wouldn't advise completely forgetting their presence, they won't be ready until the potatoes are done.  And they won't catch on fire like their big cousin. 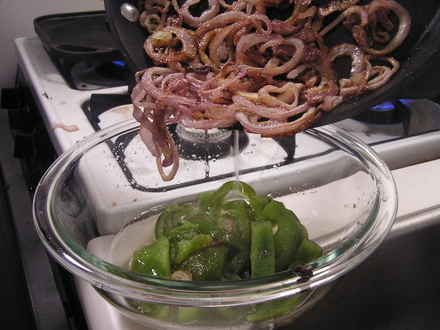 Cook the onion until it starts to develop a golden hue but still is flexible.  Pour the onions and the cooking oil into the bowl with the cut peppers, oregano, lime juice, and pepper.  If the oil grosses you out remember that it's going to form the base of the dressing later, paired against the lime juice.  The jalapeno is probably done by now, so place on a cutting board and remove the steam and seeds, chop well, and place it in the bowl. 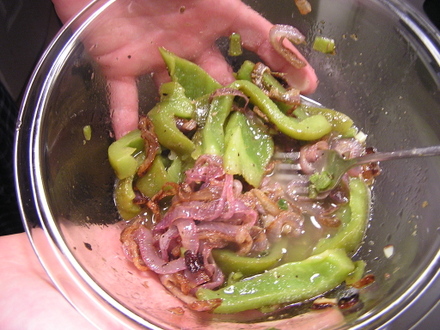 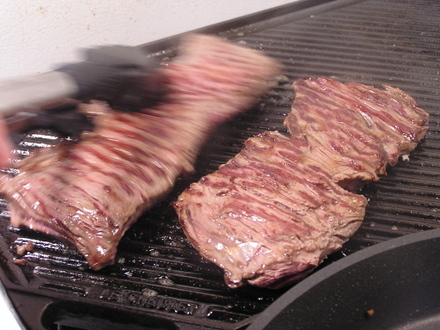 Turn the heat up to medium on your preferred grilling apparatus--love your grill pan.  Grill the steaks until they are done to your liking.  We are medium-rare guys.  So it's about 3-5 minutes a side.  When they are nice and done, remove and place on the cutting board and let sit for a couple minutes.  Then cut them against the grain until they are in nice and chewable 1/2 inch strips.

By this time the potatoes are done.  Strain the water out and lay the potatoes out so they can cool.  Wash and cut up some romaine lettuce and place everything in a large bowl. 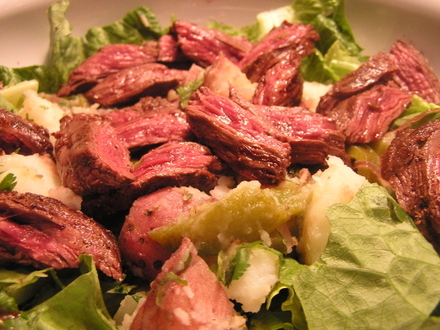 It is perfectly edible now, but be patient and let it cool for five or six minutes.  We'd also suggest drizzling some more lime and oil atop the salad, which ties the flavors together, as well as a little more salt.  Get out your camera and take a glorious picture.