Recreating a fond memory from being poor in London

Though egg mayonnaise is essentially the same thing as American egg salad, it doesn't taste like your average pitch-in.   The mayonnaise was creamy but it had a lightness to it, which probably has something to do with the proportion of ingredients.  Instead of deli-style New York sandwiches where a literal pound of meat is thrown on each sandwich--"It's like a cow with a cracker on either side," as the late great Mitch Hedberg said-- English sandwiches tend to be much thinner and a little more bizzare to the unintiated--Prawn and Mayonnaise, anyone?  They tend to focus on a few ingredients that might not feed a small army, but would provide a nice snack or lunch with a bag of crisps.

That I could do.  I could be frugal.  I could be tasteful.  But something else wasn't quite right, and it had something to do with my $1.99 Kroger Mayonnaise.  It'd have to be recreated, too.

Though a French creation, the recipe I used came from Joy of Cooking, which is much more apt to spreading on sandwiches.  All it requires is a good whisking wrist, some basic ingridents, and you're left with a much more delicate and enticing spread.

It's all about proportion.  Not too much mayonnaise, but go for broke with the watercress.  It's a marvelous creation, and adds a distinctive touch to a fantastic food I had passed off as a poor man's delight.

Adapted from the Joy of Cooking . 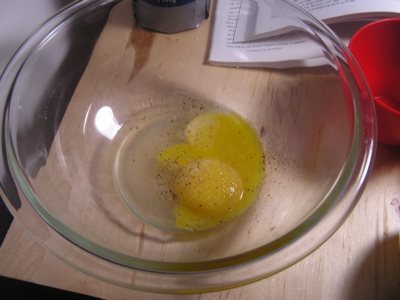 Toss two eggs yolks in a bowl.  Pour in the 2 tablespoons of lemon juice.   I just cut the lemon in half and squeezed one half.  Put in a teaspoon of salt and just a tad bit of pepper.  The Joy of Cooking suggests using white pepper, but come on. 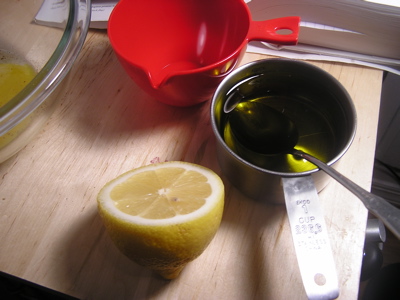 Get a cup of vegetable oil ready in a convenient little dish and a tablespoon ready for action. Note: in the pictures I used olive oil, which was suggested by Larousse  Gastronomique .  The result was overly spicy, and obviously not ideal for a sandwich spread.  The vegetable oil works much better for this recipe. 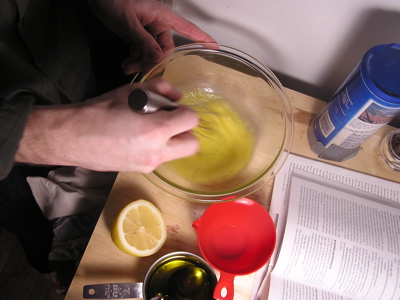 Begin by steadily whisky the egg yolk and lemon mixture.   It will take a minute for it to start to congeal. 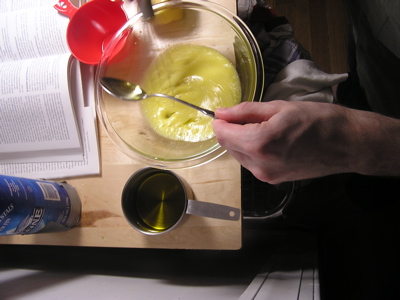 Once it has, add a tablespoon of oil and whisk it until it has been fully incorporated.  Keep adding the oil a tablespoon at a time until all the oil has been added.  While it's not the end of the world if too much oil is added at once, the sauce will break apart and you'll have to whisk with more fury than your poor wrist will probably want to.  If added slowly the mayonnaise should come together easily. 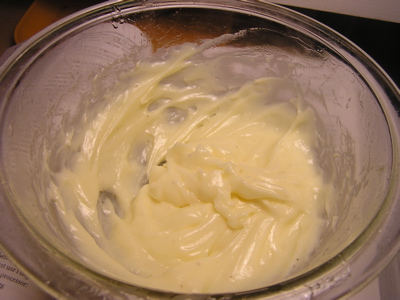 In the end it should look much like, well, regular mayonnaise ideally.  But don't be afraid to lick the spoon and notice the fresher and lighter taste.  Cover with plastic wrap and place in the refrigerator.  The Joy of Cooking says it will last for two days.  We used it all before then to know for sure. 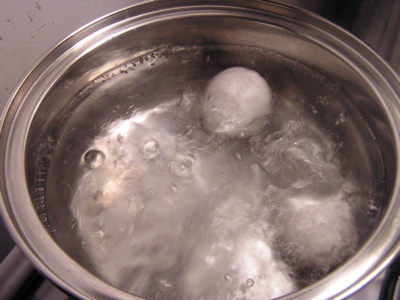 Bring a pot of water to a boil and add the eggs.  Let them cook for exactly 10 minutes.   Remove and  place in cool water until they can be handled. 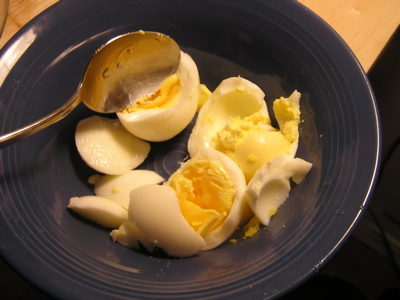 Remove the shell and place the boiled egg in a bowl.  Using any utensil you think fit --we are all about spoons here-- break up the egg into little chunks.  Then spoon about 2 to 3 tablespoons of the mayonnaise in and stir until it is coated well. 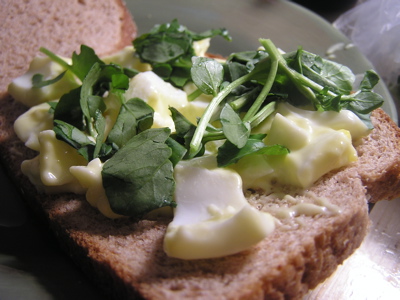 Toast some bread, place half the egg mixutre on the bread.  Top with loads of watercress.  You can cut it up, but I just tore it with my hands.  The steams are good times, so don't be shy.  Cut diagonally to be nice and proper.  I attempted to wrap it in cellophane like the old days at Tesco, but then I got flashbacks of waiting for the bus at 3 a.m. in the rain with sketchy, drunk people and I just ate the nice sandwich.