Why Do You Eat Free-Range Pork?

Does it have anything to do with hunting? 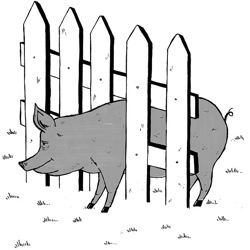 On Thursday the New York Times published an op-ed piece written by a Texas historian named James E. McWilliams called "Free-Range Trichinosis," which argues that the public's perception of free-range pork has been misguided.   On the contrary to our idyllic view of healthy, happy animals, the "free-range option can pose a heightened health threat to consumers."  Citing a study which claimed free-range pork "can be more likely than caged pork to carry dangerous bacteria and parasites" (including trichinosis), the author makes the argument that factory-raised pork as a safer way for the public to eat.

The accuracy of this claim that free-range pigs are more dangerous to eat is up for debate. Marion Nestle already noted one big problem: the study was funded by the National Pork Board .  She has also clarified that the study's measure was not of the diseases themselves, but the presence of antibodies in the pigs' systems.  Meaning that it really measured not if the pigs were infected with disease, but whether or not they had been exposed to these diseases, and thereafter developed immunities.  Pigs that live outside--just as a child who goes to kindergarten and catches a cold, perhaps--are exposed to disease and learn to overcome it.

But accuracy aside. What I found more interesting about the article was the author's assumptions about why people want to eat free-range meat at all.

Whenever possible I buy free-range or humanely raised pork for one major reason: it's more humane to the animal.  In my opinion, if a farmer decides to raise pigs, he or she is under an obligation to practice good animal husbandry. The pig is going to serve our desires  as humans to eat meat, and we must in turn treat its life with respect.  As a meat eater this is something I do to practice ethical eating.

The added benefit to proper husbandry (though it also has a lot to do with the breed) is good taste.  Treating an animal properly with a good diet and exercise also means that its meat tastes fuller and richer. This benefit makes the argument quite convenient for me, because who would argue against better taste?

But the author claims that people eat free-range pork because it makes them feel like they're eating a wild animal.  That these eaters would ideally be hunting the animals themselves but, they lack this option (maybe because they're liberal urbanites?).  Therefore eating free-range is "a more civilized step toward wildness and, by implication, a more 'natural' taste."

Therefore, free-range pork is a backwards step in the continuum of domesticated meat, a vain attempt by people who "despise industrial agriculture and adore the idea of wildness." A way to pretend they are living some pre-industrial idyllic time.

I'm curious if any of this rings true for you.  First, do you make an effort to buy free-range pork or any kind of pork (or for that matter, another meat) that's not raised in a factory (i.e. from farmers' markets or other sources)? And if so, why do you do it?  Is it because doing so is closer to eating animals that are wild, i.e. hunted?