The heat was intense, but this roast chicken was the best yet 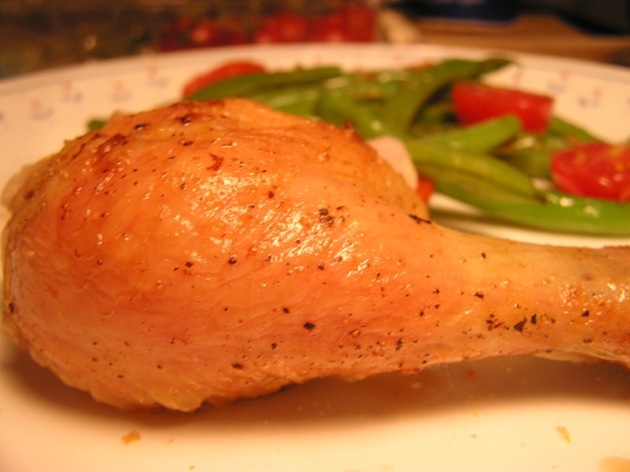 Yeah, it's true, I did decide to roast a chicken on the hottest day of the year , much to the chagrin of my girlfriend, my neighbor Jason, and my brow which had to battle the entire evening against a downfall of sweat pouring over my forehead.  And while the hysterics of previously mentioned cocktail mistress (girlfriend) could be seen as an over-dramatization of slightly toasty dinner, she was right.  It was sweltering.  Instead of eating at the table, we munched on chicken strewn out on the futon by a fan that was blowing straight on our heads, sending napkins dancing around the air in a symphony of shame.  But I swear it wasn't my fault.

The Zuni Cafe's much heralded roast chicken takes a day or two of salting beforehand, and I had actually had the incredible foresight to cover the bird in salt and place it in the refrigerator the day before, just because I knew we were having a guest over for dinner.  It was a minor miracle.

So here I am with a expertly-seasoned bird chilling in the fridge. I'm acting like a perfectly responsible person for the first time in ages; I've planned ahead .  I'm just supposed to not cook it because it's miserably hot?  True, we have one small air-conditioner the size of a loaf of bread and one single fan that doesn't do a damn thing against an onslaught of 475 degrees that have been building up for an hour.  But I'm just supposed to wait even though I know this recipe is going to be dynamite and send my guests and skeptical girlfriend into fits?

Of course not.  While some of my chicken braising adventures have ended in failures, messes, or just decent meals, roasting has so far never let me down.  So I thought this would be the perfect dinner party meal.  Whether it was Bourdain's highly seasoned bird , or Kafka's simple beauty , I've never failed.

I pulled the chicken out of the oven and every inch of the skin on the breasts had adhered to the bottom of the roasting pan.  Disaster.  My face was covered in sweat, the other two where choking on chicken smoke, and I had a bird without its lovely, sensual skin.  But they were good sports.  Especially when they first bit in.

While I've had some phenomenal success with chickens that were just shoved right in, this marinating step takes the taste up one huge notch and lets the chicken attract all the attention.  It needs no more salt or pepper.  I poured a little sauce of the chicken, but it didn't really need it.  It needs no butter or oil or really anything to crowd the plate.

I think that moving the chicken around every five or ten minutes would keep it from sticking to the pan, but I'm not completely sure.   The salting technique, however, is a must if you can possibly remember to salt the chicken and have plenty of strong, cold drinks for the friends to cool down with. 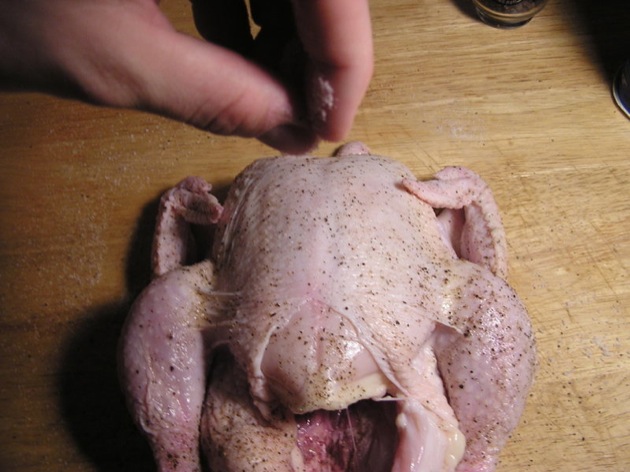 Rinse the chicken thoroughly in the sink.  Then pat dry both inside and out.  This will take a little more time then seems right.  Just make sure to use new paper towels about half way through and see if it picks up any moisture when pressed down.  It will always seem a little moist.

On the top of the chicken towards the bottom, find the slits between the skin and the breast.  Carefully stick one finger in, but be sure not to puncture the skin.  Then slide two sprigs of rosemary in each side.  Then rub the chicken down with all of the salt and pepper, stick him in a pot, cover with plastic wrap, and let him marinate in the fridge for at least a day. 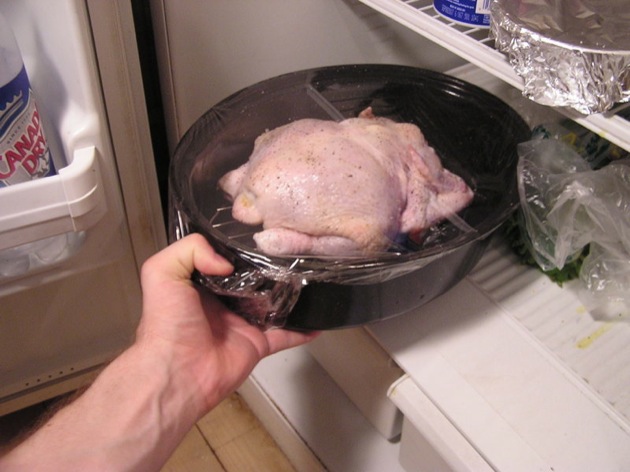 Preheat the oven to 475.  Remove the chicken from the roasting pan, and set it aside.  Heat the pan over a medium flame for about five minutes.  Then place the chicken in the pan breast-side up.  If the pan is hot enough, the chicken should sizzle when it hits the pot. 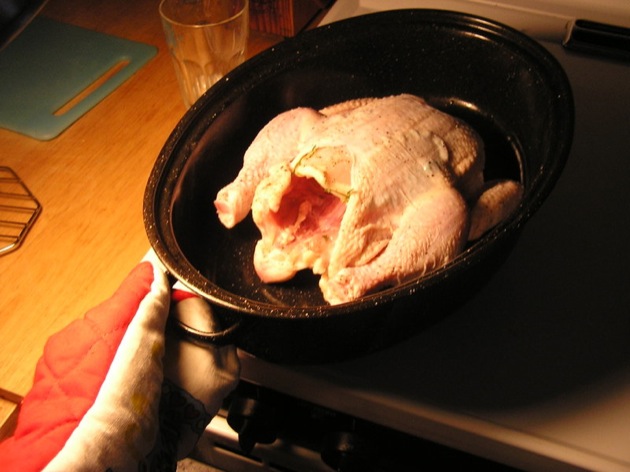 Put the pan in the oven and cook for twenty minutes.  Shake the pan a little to make sure the bird doesn't stick and then cook for another 10 minutes or so.  Flip the bird so it's breast side up and cook for 15 minutes.  This is where I came into a little bit of trouble.  I'd shake the pan after five minutes or so to make sure the chicken doesn't stick.  Then flip one more time and roast for another 8 minutes or so.  Remove from the oven and place on a cutting board and let the poor bird rest for about 15 minutes. 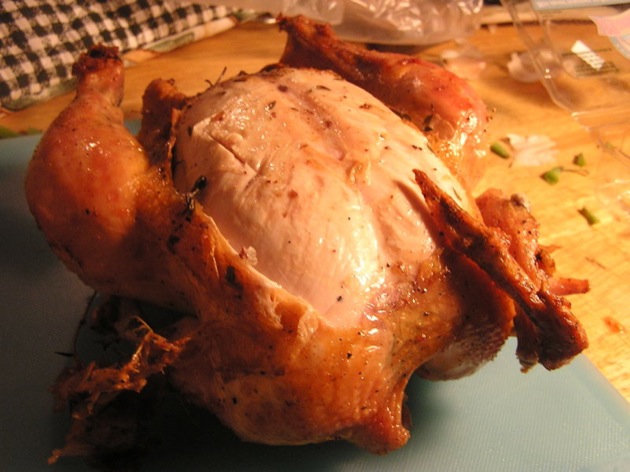 The skin of my bird came off in a horrible accident, but other wise came off looking wonderfully.  With a pan full of goodness, the options are endless.  I deglazed the pan with a little white wine and let it reduce by half.  But really chicken stock would work well, too.

Cut up the chicken, serve with the sauce and a nice side of green beans, and enjoy. 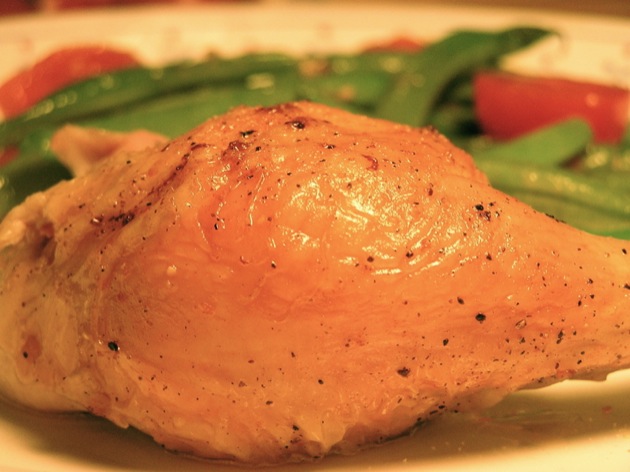