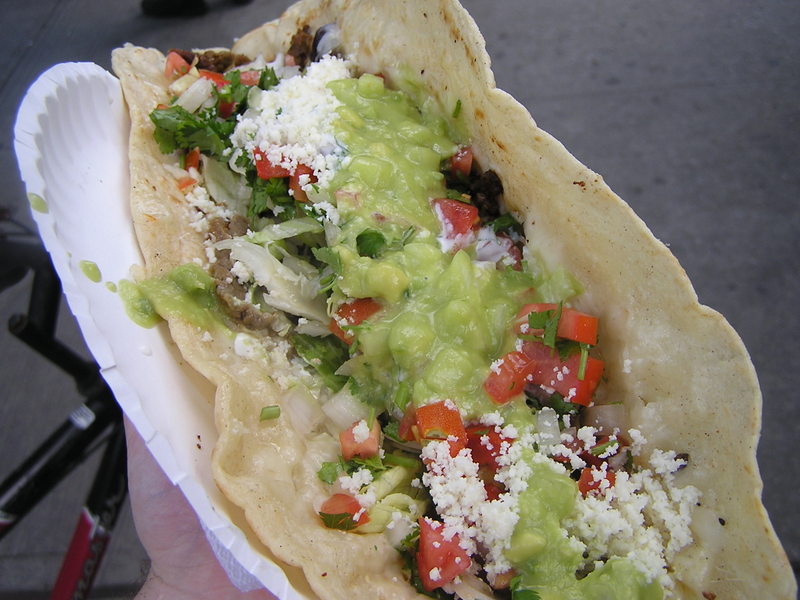 On Saturday morning, at the bright and early hour of noon, my phone began ringing.  I vaguely remembered excited pronouncements the evening before about going for a bike ride out to Red Hook to visit the infamous ballfields , where soccer and baseball games unfold throughout the weekend, and outdoor food vendors set up shop on Bay St. to serve cheap, fresh food from south of the border (all the way to South America, in fact).   As I answered, Nick reported to me, quite ambitiously, that he and his girlfriend were leaving on bikes in five minutes down Court st. to the fields.  "Groan," I said quite literally.  Then I had a glass of water, made espresso on my brand new Bialetti stove-top espresso machine, and hit the road. 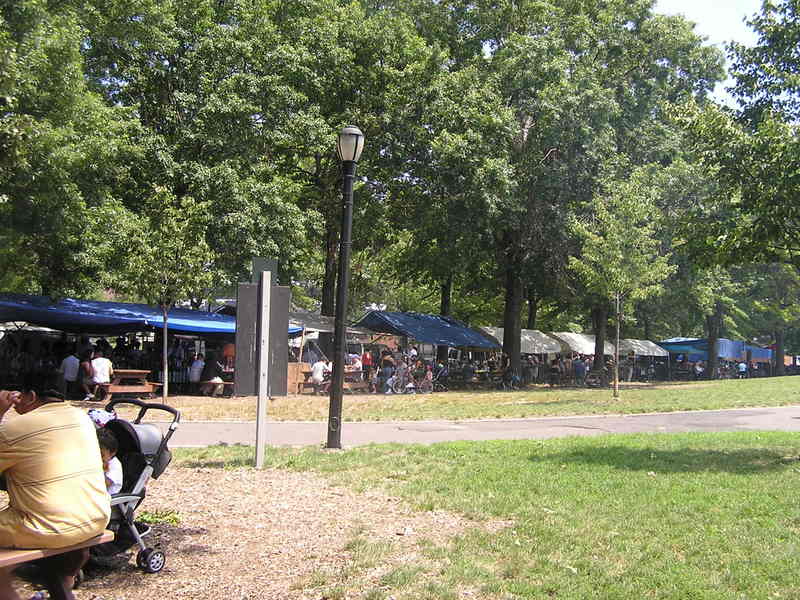 We arrived to excited chatter, sizzling, and plumes of charcoal smoke collecting in the tents and spilling out with the breeze.  In fact, it was a bit funny how little attention anyone was paying to the actual game going on right next door.  By this time I was fully awake, and we walked passed vendors of empanadas, grilled corn rolled in crumbly queso fresco , and plates of marinating ceviche.  After a reconnaissance walk-through, we returned to this place, which claimed to make quesadillas, which in fact seemed like massive tacos (see above).  Not that we were complaining. 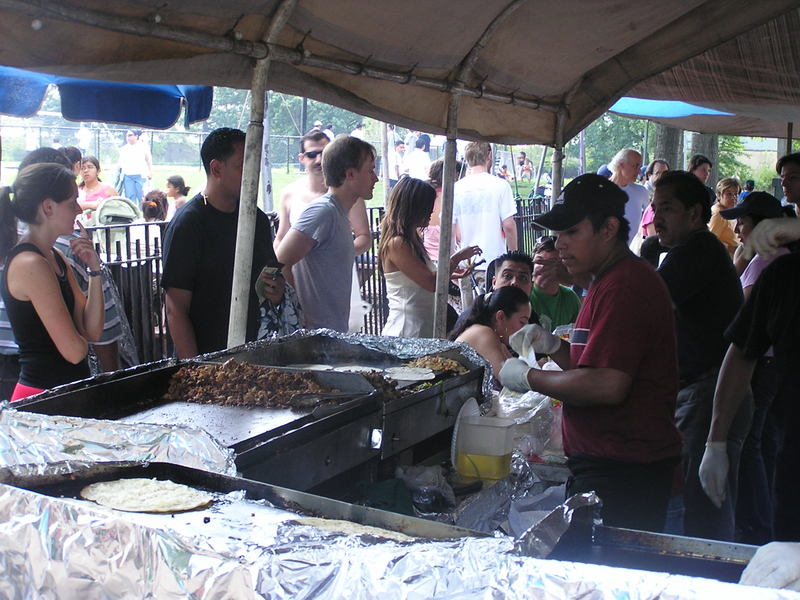 Pork, chicken, or beef, of which we determined beef to be the best.  They top it with meat, pico de gallo , guacamole, and queso fresco .  Perhaps they obstained because our gringo faces looked even more pallid in the bright sun, but hot salsa was not added.  I took the liberty of doing so myself, a deep red puree with a sharp bite and smoky, though not chipotle, afterbite.  Then we retired to a couple benches to try to watch the game, where we instead watched our tacos. 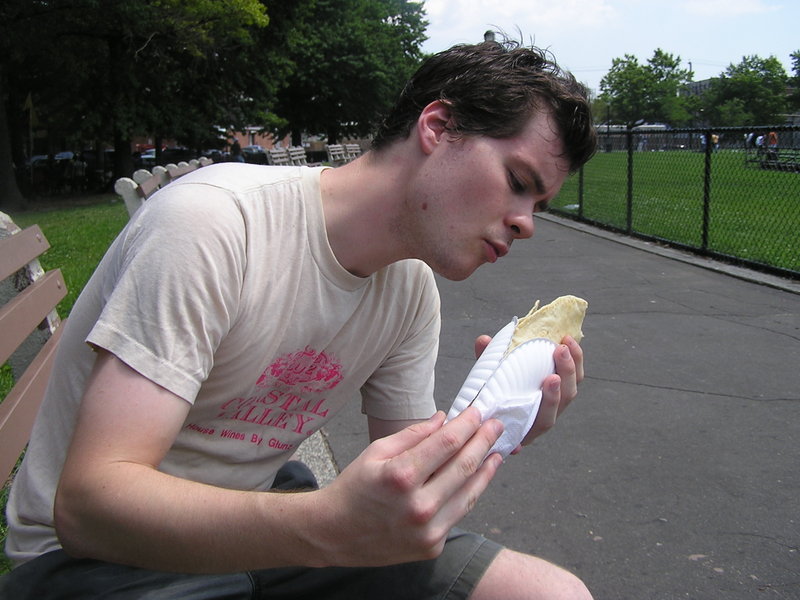 After running into a photographer from the New York Times  (who photographed me with my mouth full and juices running down my arms), the salsa was really knocking my tongue for a loop.  Luckily, right down the way was a juice stand. 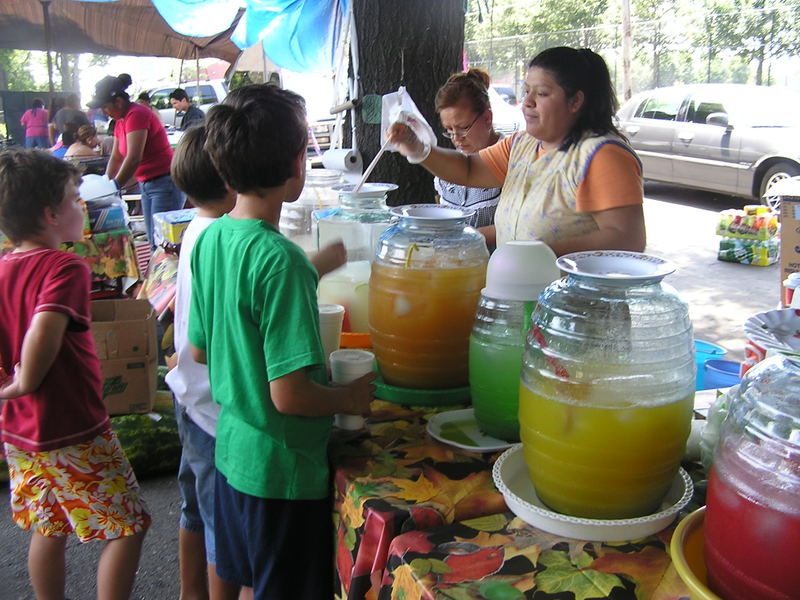 We decided on a watermelon, pineapple, and papaya drink.  So these are way better than at Gray's or Papaya King.  Incredibly light and refreshing, just barely sweet. 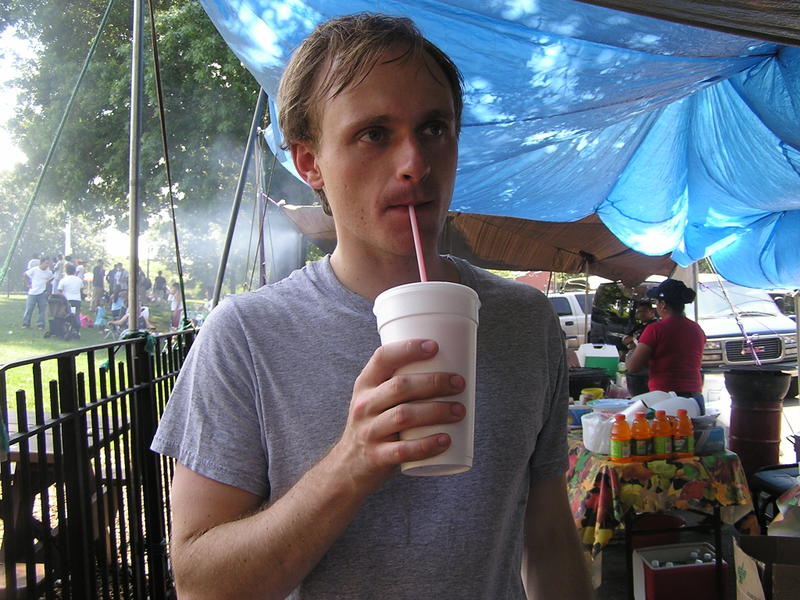 Nick thought pensively about the drink, after which we all felt like lying down from all the food.  We'd planned on trying a whole load of stuff, but the quesadilla did us in right away.  So we'll be back, maybe to swim in the free Red Hook pool (but bring a lock with you, it's required) after we wait thirty minutes post-eating.  Go now, as it's getting popular and New York Mag just put it on the top ten best cheap eats in New York .  Red Hook's a wonderful place and if you haven't been yet, you should go, if only to see the new Fairway grocery store.  To find the ball fields, take the F train to Smith/9th st., walk over a block to Court St., and follow it all the way south until you start to smell the grilling corn. Map