How to make great beans in less time. 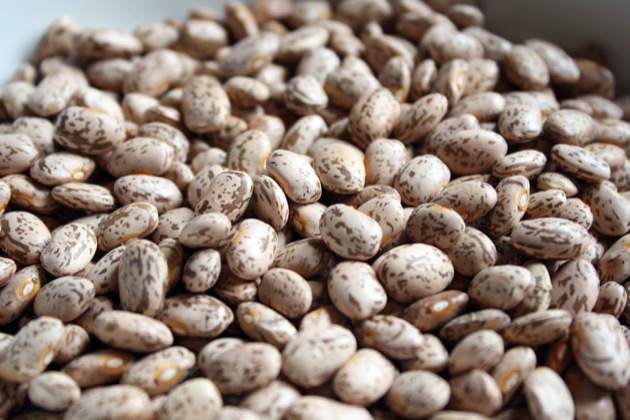 It seems that in the past few years there have been a few monumental revelations of the "everything you thought you knew about cooking was wrong" variety.
- Steven A. Shaw aka "Fat Guy", Executive Director, eGullet Society

When the timer sounded, I was caught off guard.  I reached for a kitchen towel, carefully folded it around the hot handles of my dutch oven, and transfered the hulking pot to the top of the stove.  I threw the towel over my shoulder, and contemplated how this batch of dried beans could possibly be done.  They had only been cooking for a total of 90 minutes, and yet the Executive Director of the eGullet Society claimed that they would be ready.  I trust this guy.  He gave the world the Butter Steak .  I reached for the lid, forgetting the towel, and scalded my right hand on the hot top.  I cursed very loudly.  After refocusing my thoughts, I reached for the towel, wrapped it completely around my wounded hand, and finally opened the lid.

The beans were cooked.  Every single one was tender and ready to go.  It had taken 15 minutes on top of the oven to bring to a boil, and then 75 minutes inside a 250 degree oven.  I had not soaked the beans before hand.  I didn't even bother to rinse them or sort through to see if any rocks had been hidden inside.  How could this be?  This question drove me mad, because I have been cooking beans nearly every week for the past year, and now I realize I've been doing it all wrong.

My bean-making mantra has always been "give them time."  I usually just cover the beans with some water, set the burner on low, and try to forget about them.  Hours pass.  Lunch and dinner often roll by.  They took way too long, but if I cranked the heat the beans would simply turn to mush, or seize up and become as hard as little pebbles.  Soaking the beans overnight seemed to solve some of the problems, but then I had to plan this thing out a day in advance, instead of just deciding to chuck some beans in to a pot.  It's a nice thought, but one I never seem to make.  Occasionally I'd do a quick soak, where I'd bring the pot to a boil, and then turn if off to soak for an hour or so.  But that never really seemed to make much of a difference.

I suffered through this ordeal because dried beans, no matter how difficult to make, were infinitely better than canned beans.  Though the canned variety can be incredibly convenient and usually taste just fine, they don't have the impressive depth of flavor and a meaty aroma that slowly simmered beans can attain.  It just doesn't happen.  Dried beans make tastier soups and better platforms for refried beans.

Which all made this revelation related in eGullet even more surprising.  Not only was it faster than normal, it actually produced better beans.  How often does that happen in life?

I've only done this once, so I have plenty more experimenting to do.  These beans were cooked without any flavorings at all beyond a pinch of salt.  I wonder what some aromatics and a piece of pork or two would do this batch.  Could they get even better?  And how would black beans fare with this method?

That's probably too many questions.  In the meantime, I made a huge batch of refried beans.  I still have some leftovers.  Here are a few other uses for dried beans. 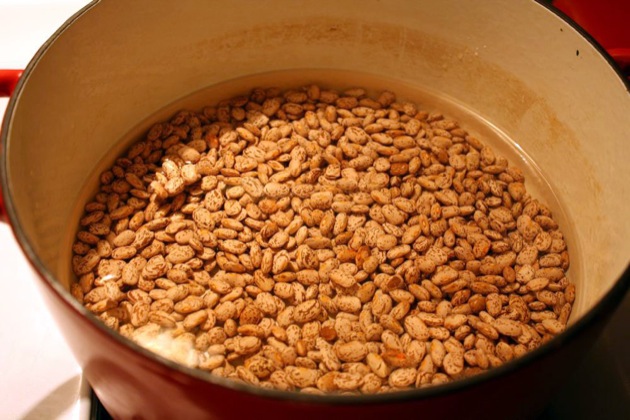 Dump the beans into a large dutch oven or pot with tight fitting lid.  Pick out any broken pieces. Add the salt.  Top with enough water to cover the beans by an inch and a half.  Bring pot to a boil.

Then cover the pot, and set in the oven.  Cook for 75 minutes. 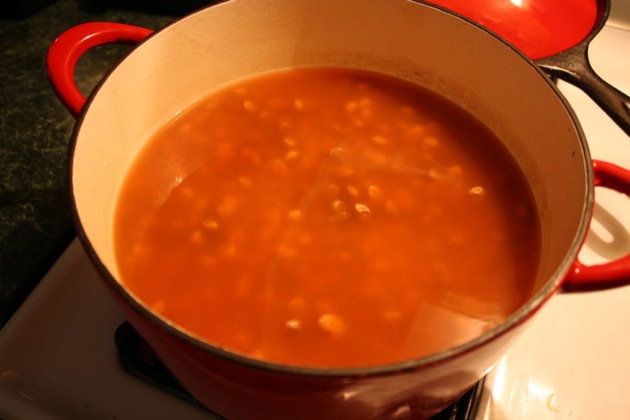 About 45 minutes in, check on the beans.  If they look too dry add some boiling water to the pot.  Mine did not need any. 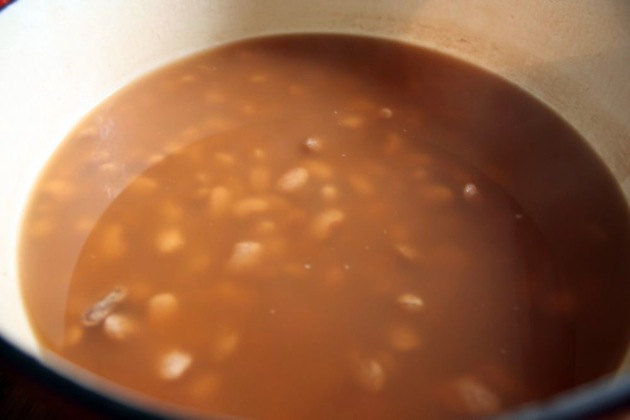 After 75 minutes they should be done.