How do you make this Wisconsin classic? 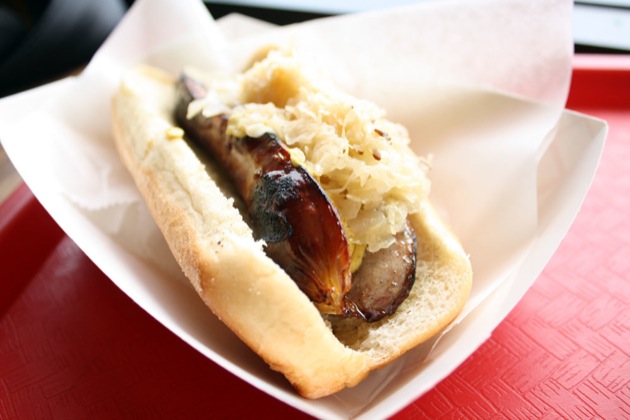 I have been thinking about bratwurst for days.  What started as an idea for a simple cookout on my little Webber Grill has now completely consumed me because I simply can't find the right recipe.  The question eventually led me to walk into Hot Dougs on a recent Wednesday and ask Mr. Doug himself what was in the sausage.

But first, do you know?  What is it, exactly, that makes a bratwurst a bratwurst?  I know this sounds like an obvious question, but really...think about it.   I've been eating them since I was a little kid and they've always been huge off-white sausage stuffed into a bun and slathered with mustard.  I know what to expect when I eat one.  And they certainly don't look like a hot dog.  But I don't honestly know what it is that makes them unique.  Is it the combination of spices, certain kind of meat, or the cooking method?

I thought the answer would be simple when I began this search.  I started in the natural place, with Michael Ruhlman's Charcuterie .  His bratwurst recipe is a mixture of pork and veal with the "traditional sweet-spice bratwurst flavors of nutmeg and ginger".  But as I read on I realized that there was something awfully different about the resulting sausage.

The ultimate fresh bratwurst, this is one of the richest sausages here, given it's generous use of cream and eggs.

Say what?  I wanted the sausage that is stuffed into a casings, poached in beer, and then grilled until crispy on the outside.  The more I looked into it, the more I realized he was probably describing the original German version of the sausage, which I'm absolutely sure is delicious.  But it's not what I wanted.

I realized that what I wanted was a Wisconsin bratwurst , the kind that is stuffed in a big bun, and topped with sauerkraut and grainy mustard.  You eat these fresh off a grill with a beer in your hand.  Unfortunately, though there is loads of praise for the Wisconsin specialty , there isn't much talk about what goes into them.  In fact, most recipes out there are for how to cook pre-made sausages, not how to make them from scratch.  That's when my search really began.

I asked my local butcher, and he said his were just ground pork with a few seasonings like nutmeg, mace, and ginger.  They looked good, but were they authentic?  I looked around onlin.  To my surprise, Johnsonville Brats popped often in discussion about authentic Wisconsin Style brats.  They weren't considered the best, but they were considered perfectly solid.  I tried poking around their site to see if they could tell me what was going on.  But all I found were statements like this:

The original "thrill for the grill" that started an American fun food revolution. Perfect for any occasion and a favorite at picnics and barbecues everywhere.

Come on!  After searching a little longer, I ran into a brand called Sheboygan which had been mentioned as one of the better brat companies.  Their website is filled with anonymous first-name-only testimonials of satisfied customers.  Anonymous, that is, except for a certain Doug from Hot Dougs .

Two weeks after we offered your amazing bratwurst in my restaurant our sales increased by 20%!  Thank you!

So I figured I could accomplish two things at Hot Dougs.  I could sample the Sheboygan bratwurst, which is considered a top notch Wisconson brat, and I could also pester Doug with the fairly ridiculous question, "What makes a bratwurst a bratwurst?" 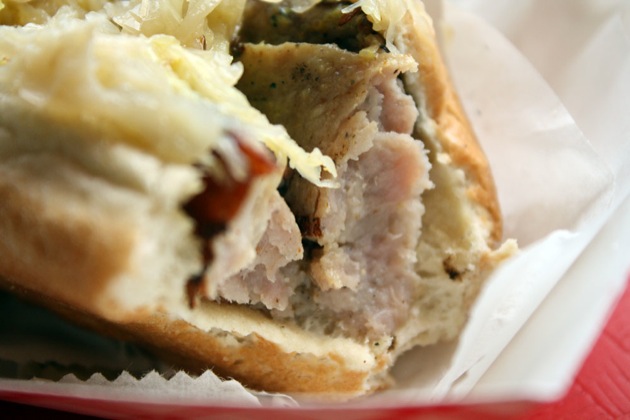 Sure enough, as I bit into to these brats I noticed a definite smokey aroma.  This was an incredible brat.  It's texture was fine, and not chunky, and I picked some definite nutmeg.  It was everything I wanted in a brat.  And yet, I had never heard of smoking brats before.  I thought they were a fresh sausage.

On the Sheboygan website I finally tracked down a recipe of sorts, "Pork, water, salt, mustard, spices, corn syrup solids, (citric acid, BHA, BHT added to protect flavor)."  But it doesn't list quanities or which spices it uses.

Perhaps I'm overthinking this.  Maybe there isn't an authentic Wisconsin brat recipe.  But I'm still searching.  Does anyone know where I should go from here?