An Opinionated Way to Roast a Chicken 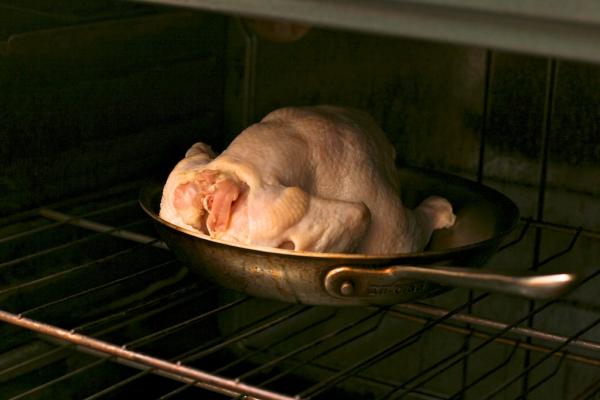 Having roasted many, many chickens in my cooking life, I've come to the opinion that there is no way to roast a chicken without some kind of opinion. You may get away with tossing an untrussed chicken into the oven with a shower of salt, maybe a lemon in the cavity, and calling it dinner, pretending to be as careless as possible.  But that's still an opinion. So is planning days ahead of time brining it and messing around with a complicated sauce and caring exquisitely about every single detail.

If someone knows how to roast a chicken, it should be Thomas Keller.  Reading the Bouchon cookbook, you might be comforted to see such a simple roast chicken recipe in the opening pages, from such a notoriously fastidious chef, calling for a chicken, salt and pepper, and some thyme (optional). But wait--the Bouchon book has two recipes for roast chicken--later on is the highly crafted brined-in-advance version which offers two complicated sauce preparations to accompany.  They are chickens for different occasions.  But no doubt chicken roasting is an emotionally complicated matter that sparks a battle in the cook between nostalgia for simplicity and the pursuit of perfection at any cost.

"It's the philosopher's stone of the kitchen," to quote one of my favorite pieces ever published on eGullet about the frustration and triumph of roasting a good chicken.  Adequate roast chicken is easy to find—and perfection is probably impossible.  Somewhere in between we all labor as best we can.

"The unexamined chicken roast is not worth cooking," the love child of Socrates and Epicurus might say. Speaking of philosophy.

All this to say that I loved the title for a recipe in Rozanne Gold's latest book Radically Simple , which I've been writing about rather gushingly lately over on the Dinner Tonight column.  It's a superb book, and the fact that she titled a recipe "An Opinionated Way to Roast a Chicken" charms me to no end.

The method is something I've never seen: Gold roasts it without salt or seasoning of any kind , with the idea that it will taste just like itself.

With a recipe this simple, it's a good idea to skip the supermarket mass-produced chicken, tempting though it's cheap price may be, in favor of a bird that had a chance to leave a cage and, hopefully, root around a little bit to diversify its diet.  That kind of natural process is an integral part of developing flavor, which will show up prominently in the recipe because, well, there's nothing else here but the chicken itself.  We're after what Julia Child called "chickeny" when she described the marvelous flavor of the birds she found in France.  There's no other word to describe it, and no higher compliment than for a thing to taste of itself.

Of course, this is going to be pretty bland if you don't introduce salt somewhere.  So it comes in with a simple pan sauce of…wait for it…water and salt.

Yes, just a splash of water in the pan to loosen up all the crusty bits stuck to the surface, then seasoned with salt and poured over the chicken.  This is certainly radically simple.

The good news is that it's also radically good.

An Opinionated Way to Roast a Chicken 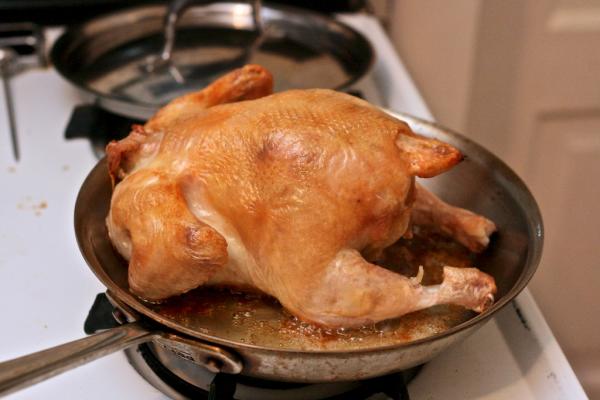 Preheat the oven to 475 degrees Fahrenheit.  Rinse the chicken and dry very well (dry skin is essential so that it crisps up well).  Preheat an ovenproof skillet over medium heat until very hot, then lay the chicken breast-side down in the pan (preheating it is to prevent the skin from sticking). Carefully place this pan in the oven.

After 30 minutes, carefully lift the chicken skin from the surface of the pan and flip it over.  Return to oven and roast an additional 20-30 minutes, depending on the weight of the chicken; it should be done with the thigh loosens from the body, or if you lift the chicken and tilt it, the juices that run out are clear and not tinged red.

Place the chicken on a cutting board to rest for at least 10 minutes. 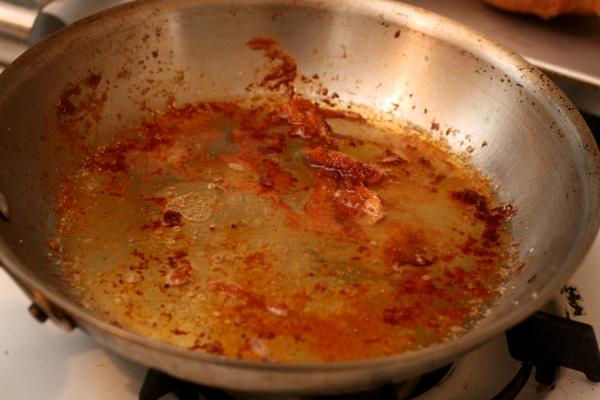 In the meantime, pour out the fat from the skillet and add a good few splashes of water.  Put the skillet over a burner (watch the handle, it's hot) and bring to a boil. 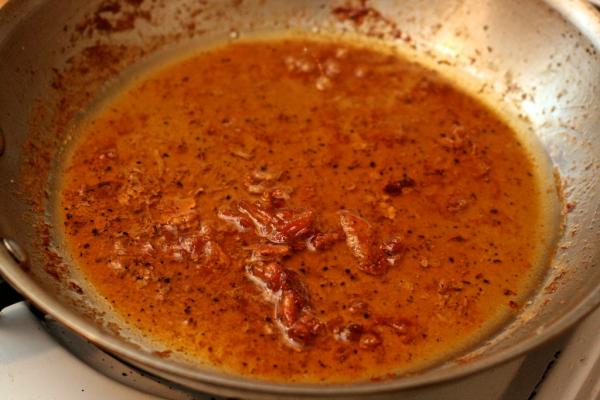 Scrape up all the wonderful flavor and season the sauce to taste with salt and pepper.  Carve the chicken and pour the sauce over it.