Arriving in Rome, and the Search for Pizza Bianca 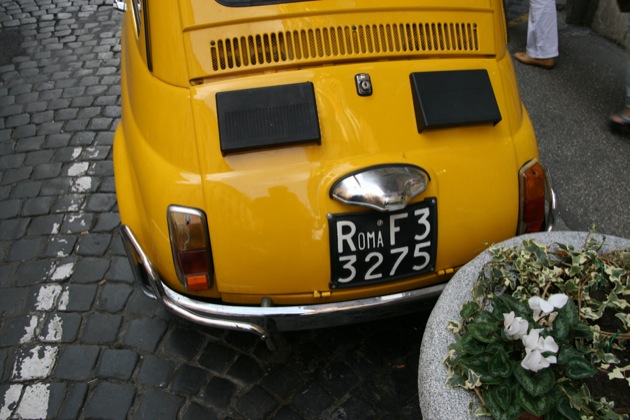 I've dreamed about going to Italy for a couple years now. But with New York rent to pay, only a handful of vacation days to draw from, and 7 hours of plane time all conspiring against me, I've never been able to go.  By a great margin Italian food is my favorite food to cook.  As my love of Italian food has grown, so has this vaguely imaginary place called Italy--into a glorious land of grandmothers, pasta, and culinary ecstasy.  I've been lucky living in New York, where restaurants like Babbo and my local Franny's sell first-rate Italian food, where I can taste something very close to the real thing.  But I've always wondered what the food would taste like in Italy itself--and how unrealistically I was building the place up.

When I was in college, I studied abroad in Ireland and spent a month with a backpack and a Eurrail pass kicking around Western Europe, a rite of passage so central to the American college experience that it's cliched.  I slept in 15 cities in less than 30 days, and did laundry once.  But my goal then was to see as much as possible, and subsequently claim to have visited more countries than everyone else.  I treated it as a way of checking off where I'd want to return someday.

But this was before I cared much about food.  My diet that trip was 70% kebabs, 20% pizza (not restricted to Italy), and 10% splurge at a restaurant in Rome and one in Paris.  Without a doubt Italy was my favorite country on that trip, but it was only partly to do with the food.

Yet now I love Italy for even more reasons, and live a couple hours away from Rome, instead of seven.  So it was time.

In Estonia the weather is currently in the upper 30s, and the season's first snow is projected for this weekend.  But when our plane landed, we spilled out happily into sunny, balmy Italy, shedding our coats with the rest of the plane.   We gathered our bags and took a train into Rome proper, where we were almost run over three or four times by Italian men wearing three-piece suits driving scooters.  We dropped off our bags, took a deep breath, and headed straight for the Campo de' Fiori, where our search would begin.

We saw a little bit of the famous food market that takes place in this square until about 1pm each day, but mostly it was closing up.  No matter: we had a larger, more important reason to be there. 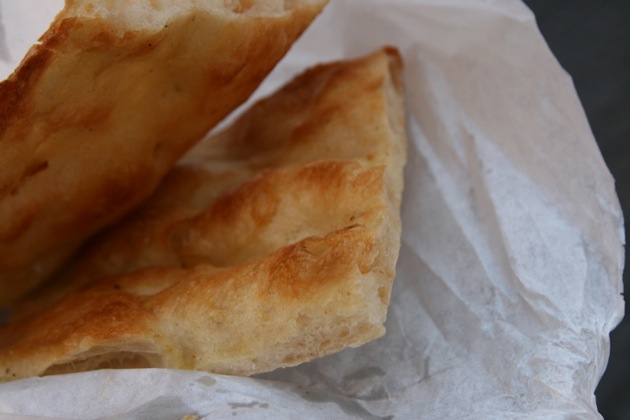 That reason was something called pizza bianca .  If you happen to be a fan of the food writer Jeffrey Steingarten, you may know what this is.  It's the food that drew him to Rome on a mad quest packing an infrared thermometer and humidity equipment, with a plan to send Roman water and flour to laboratories for mineral and gluten testing.  His goal was to deconstruct the secret to pizza bianca , a ten-foot-long bread that's cooked in a custom oven and sliced into take-away portions.  It has been made in the same way for centuries: an airy, moist, chewy, salty, and bubbly ancient flatbread, dressed simply with a little olive oil and sometimes rosemary. Before the tomato came from the New World, this is what pizza looked like.

There are two bakeries I'd read about near Campo de' Fiori that produce pizza bianca : one right on the corner of the square, Antico Forno, and another around the corner called either Antico Forno Roscioli .  It's possible even to confuse the two of them because of their similar names.  So we set off to find each, and experience it for ourselves.

The first stop was the more obviously located Antico Forno, which is right on the corner of Campo de' Fiori.  The shops door were flung open: a set on the left, which led into a small room with a few counters, standing only, and a set on the right, which led directly into the room with the oven where the breads are cooked.

In Steingarten's essay, his bordering-on-religous language described a pizzaola working continually to bake the huge lengths of bread, which are cleverly folded onto a single (though extremely long) pizza peel and then unfolded gently in the oven, starting from the very back and eventually all the way to the front, to cook for just a few minutes until bubble and brown.  The oven indeed does stretch on for great lengths, and there is enough room in front of it for the baker to swing the length of the wooden peel around.  The still-warm bread is eaten straight from the oven, warm and chewy and doused in olive oil.

But the pizza bianca we got was not fresh out of the oven; it was under a glass case at room temperature, along with other varieties that are available, such as a simple rosso (with tomato sauce) and margherita (with mozzarella).  We opted for a bianca and margherita , which were portioned out, weighed, and priced onto a slip of paper, which we took to the front to pay.  We came out into the Campo de' Fiori square just in time to hear a band playing what sounded like uptempto circus music with horns, and unpacked our pizza.

The bianca was incredibly bubbly and airy, perfectly browned, yet it still held onto a satisfyingly chewy quality; it still had substance.  I loved it, but was also angling for a dish of fruity olive oil to drag it through.  The margherita (above) was flatter and crisper, with a perfectly sweet tomato sauce.  I almost wanted to say that liked it better.  But we still had the second bakery to visit, so we set off down some dim, winding Roman street, got lost, found our way, and eventually ended up in front of Antico Forno Roscioli. 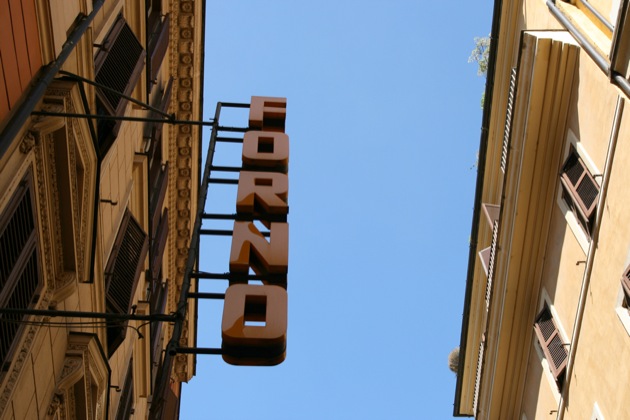 The sign above the place, just like our first stop, also simply says "Forno" (meaning "oven").  Inside, it was less austere than our first stop, with lots of other products for sale such as pastas and baked goods.  The flatbreads were again under glass at room temperature, sold by weight.  Yet to our dismay, there was no pizza bianca to be found.  My meager and pathetic imported-from-Spanish-class Italian couldn't get us very far as to when more would be available, so we opted for a thicker pizza with shredded potatoes and sausage, and a sublimely thin pizza rosso , which is made simply of dough, tomato sauce, and olive oil--similar to our margherita from last time, but even more pared down. 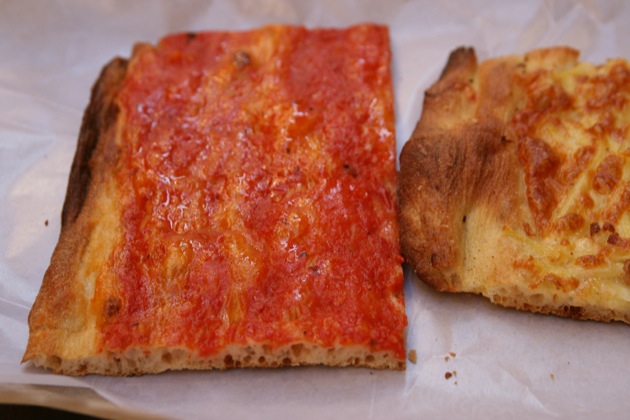 The potato pizza was delicious and filling, and we gobbled it up happily.  But there was something about the rossa at this place: as crisp and light as at the previous Antico Forno, but just a bit chewier.  The tomatoes tasted richer, the bread was more flavorful, the olive oil slicking it complex and soft and rounded.  It was a piece of tomato-covered flatbread impeccably in balance.  It was transcendent.  And it said everything about why I love Italian food: it's not more complicated than it needs to be.  Here I was eating pizza, a world-reknowned food, at its humblest beginning, something sublimely simple.  I wondered where so many lousy pizza places had gone wrong.

We'd come for the bianca , but were won over by the rossa .  Which was just fine with me.  As we spent the day ranging around from cappucino to Caravaggio (At Cerasi Chapel of Santa Maria del Popolo, you can view "The Crucifixion of St. Peter" for free), the rosso slowly disappeared from our bag, bite by bite.