Atlantic Antic: Sardines, Whole Pigs, and Too Many People 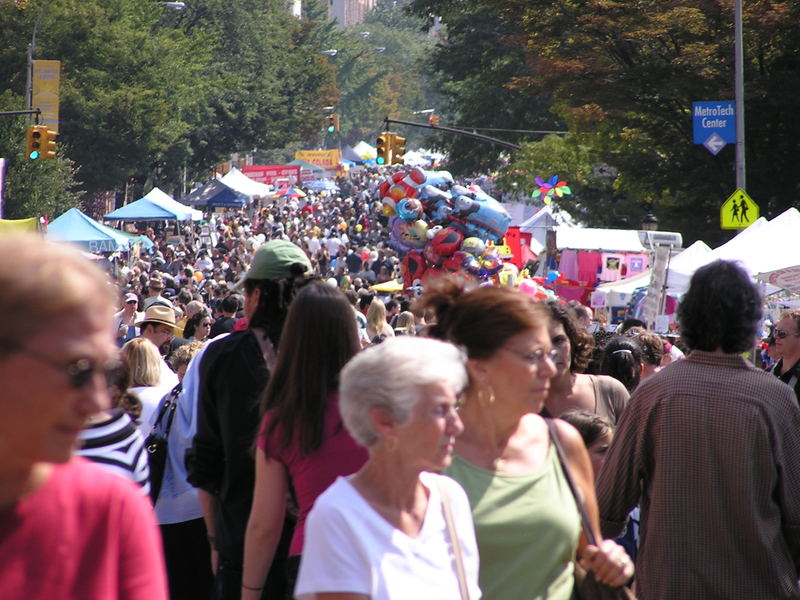 This wasn't one of those Manhattan street fairs that blocked traffic on random weekends and offered the same tired stand of roasted corn, corn dogs, and grease laden elephant ears, block after block.  Brooklyn's Atlantic Antic (rated number one street festival by Time Out!) was as hodge podge as Atlantic Avenue always is, except now the music spilled onto the streets and so could the beer (sort of). 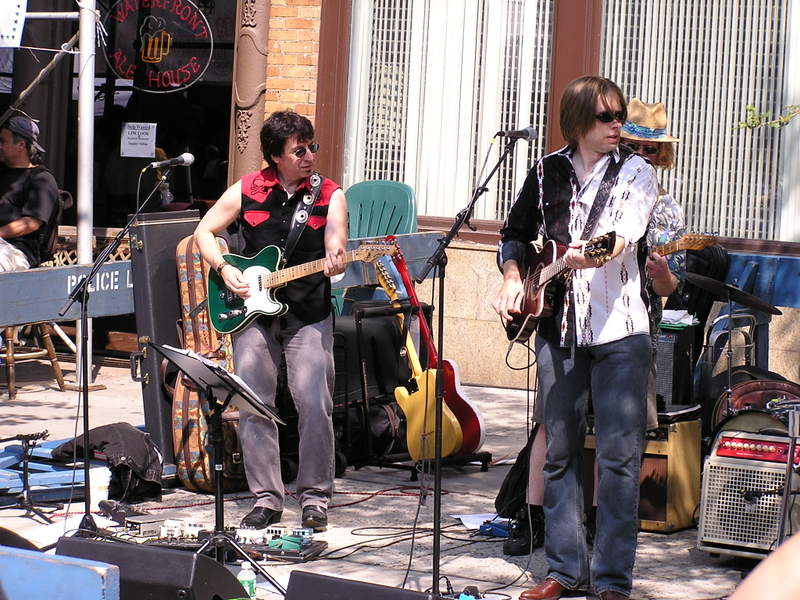 And, sure, there were loads of wonderful bands, basketball games, political action groups, and the like to keep you busy in the 80 plus degree, absolutely gorgeous weather.  But I went for the food, and that they had.  From excellent Thai, vegetarian Middle Eastern, Spanish, Southern, to all the church potlucks and bake sales you could imagine.  And it was pretty cheap. 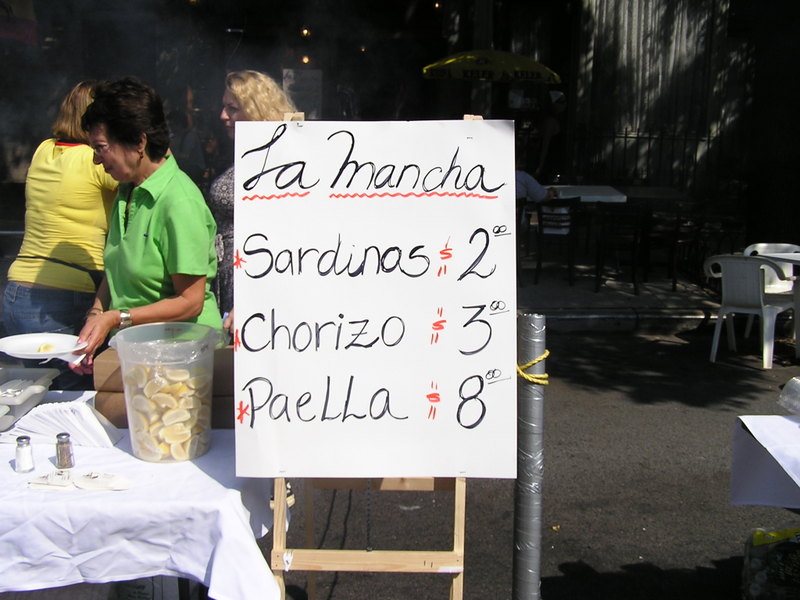 Sardines!  Talk about a neglected fish.  Never had I actually had one, and now seemed like perfect time.  But how do you cook them?  Well, apparently you just grill them whole. 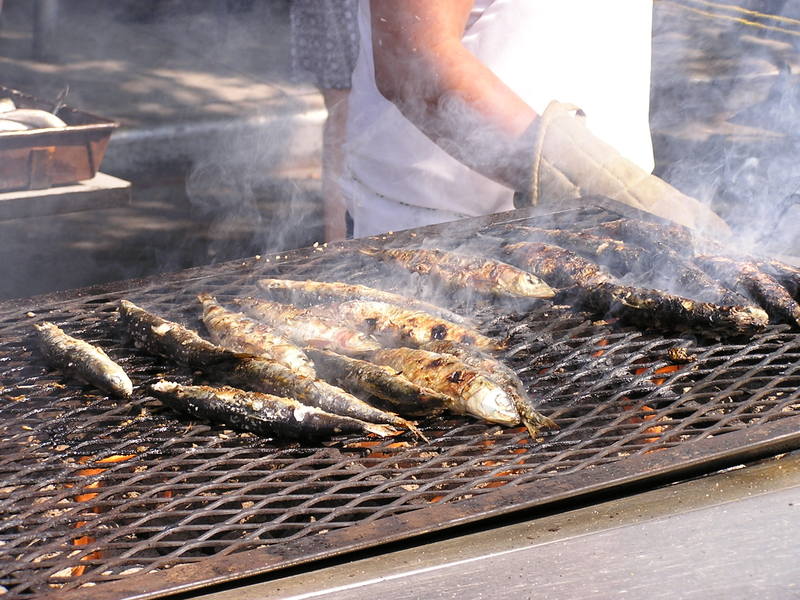 The air was heavy with their succulent smell, and though these were the first thing I passed, and I knew more delights were to come, I couldn't pass up the chance to eat an entire fish. 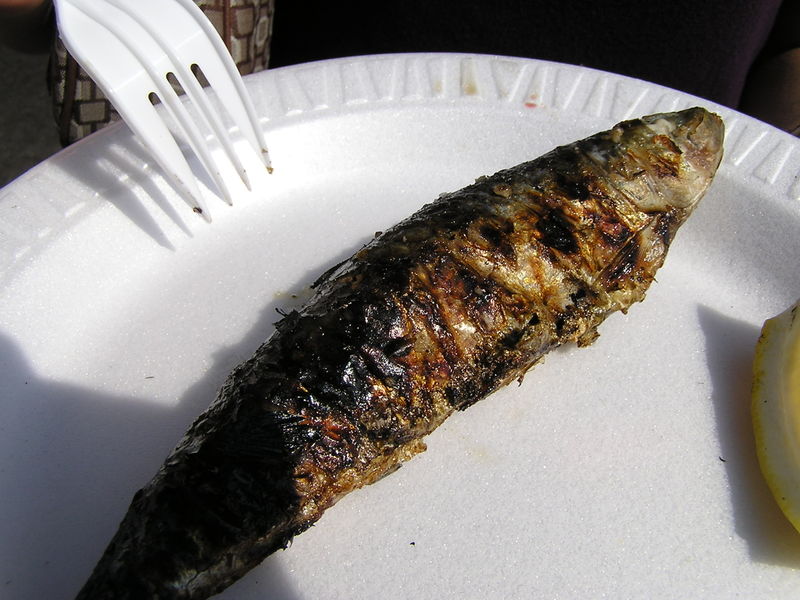 I was a little confused when this arrived on my plate, head, skin, and all.  At first I tried to flake away the skin, but by the end I as just forked into it and ate.  It had a wonderful full texture. The bones are a nuisance, but if you flake the flesh away in a certain direction most of them stay with the fish. But that was not my only adventure for the day. 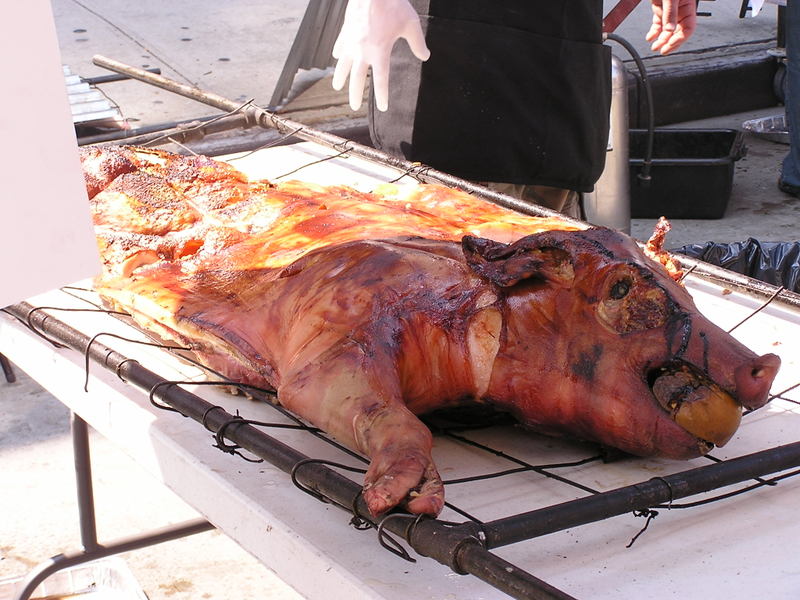 Sure I'd grilled some pork a while back, but an entire pig was beyond me and my little grill.  I wasn't quite hungry enough to tackle a pig, which would have certainly ruined my appetite for anything else. 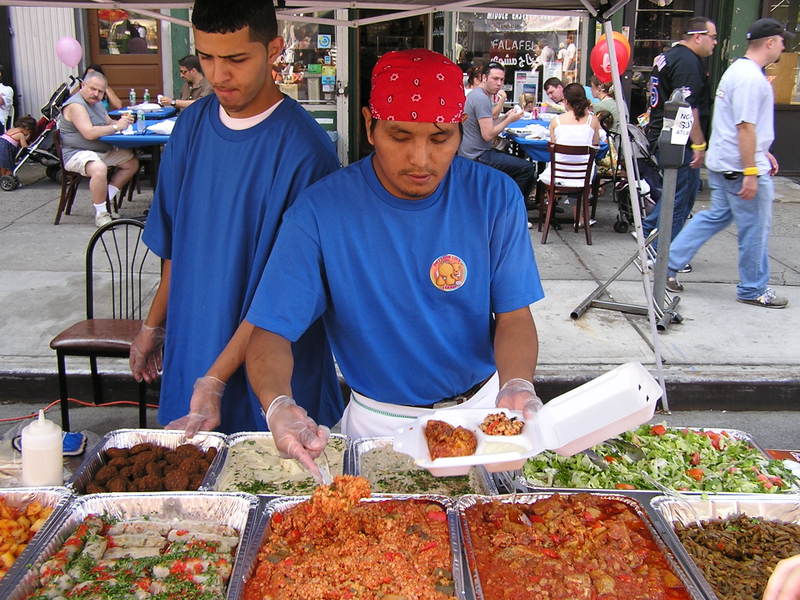 Especially because right across the street stood a stand with color so vibrant I couldn't keep away. 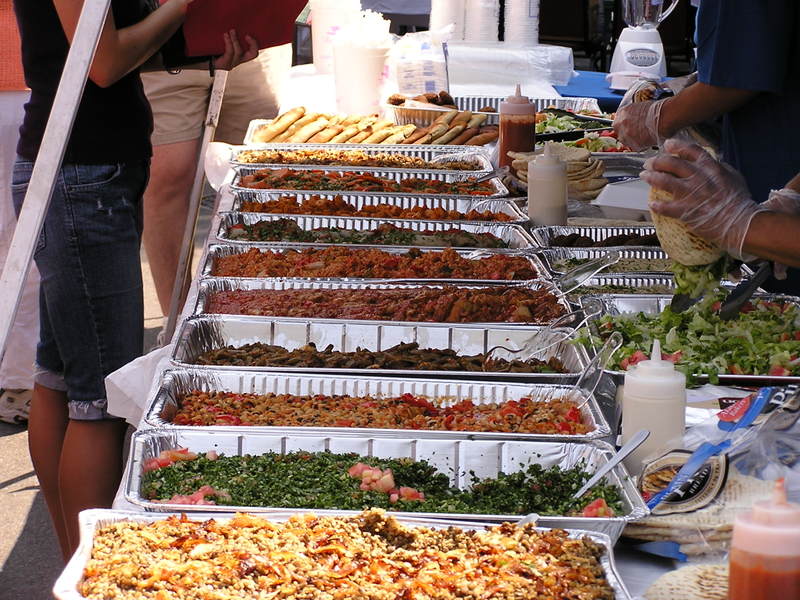 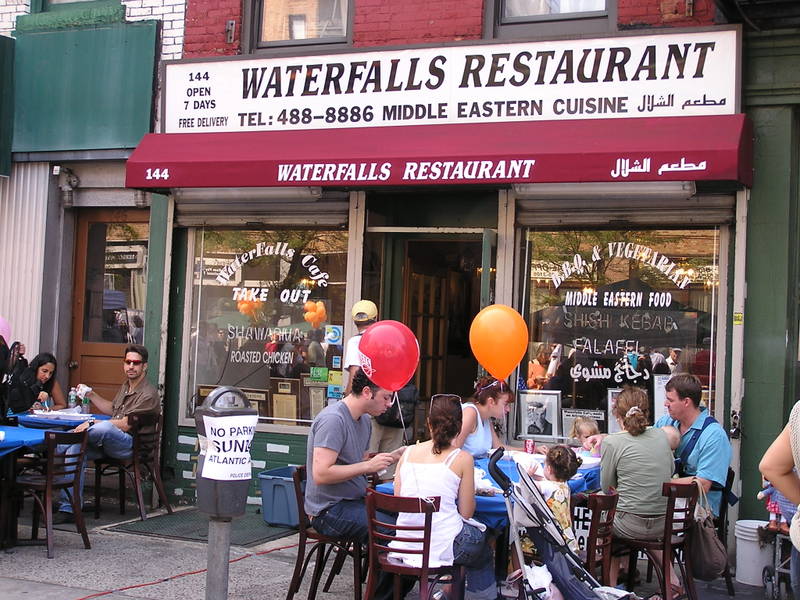 Waterfalls Restaurant serves vegetarian Middle Eastern cuisine, which means I didn't have any idea what I was eating except a little hummus and some wonderful pita bread. 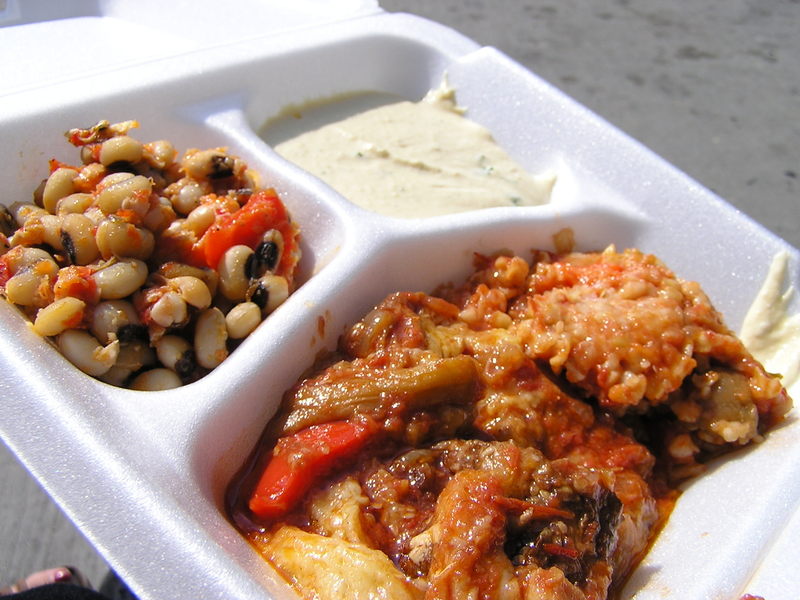 I think there are some beans in there in there, but, really, no idea.  It was great, though. 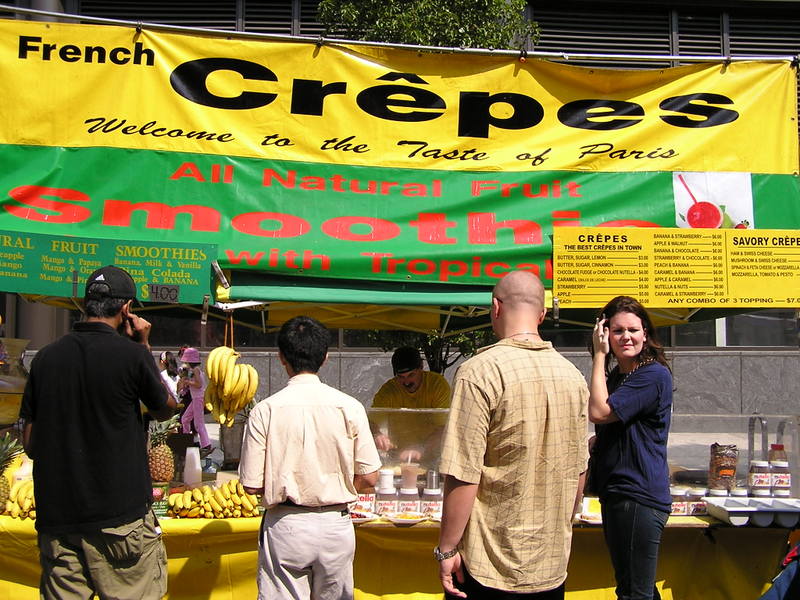 Lest you think this was only Middle Eastern, Spanish, and BBQ, enter the obligatory crepe station.  Abby scored one, Nutella-filled. 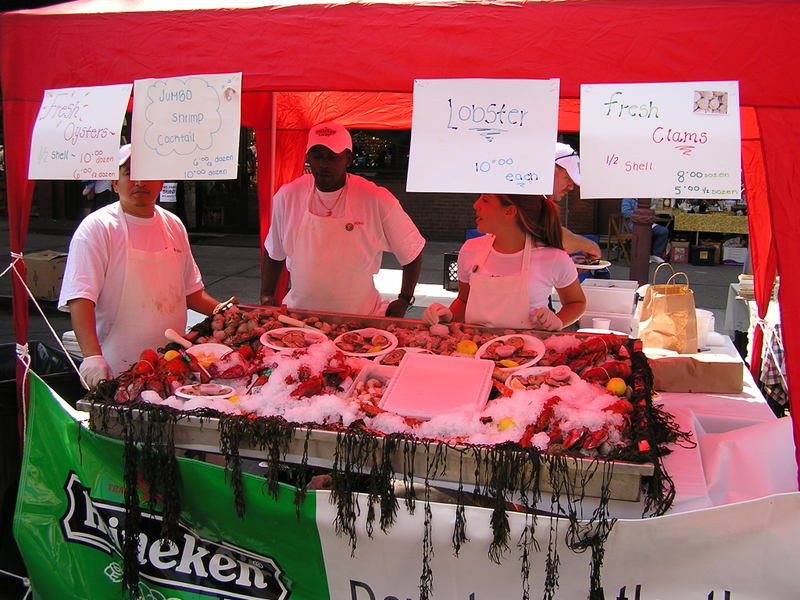 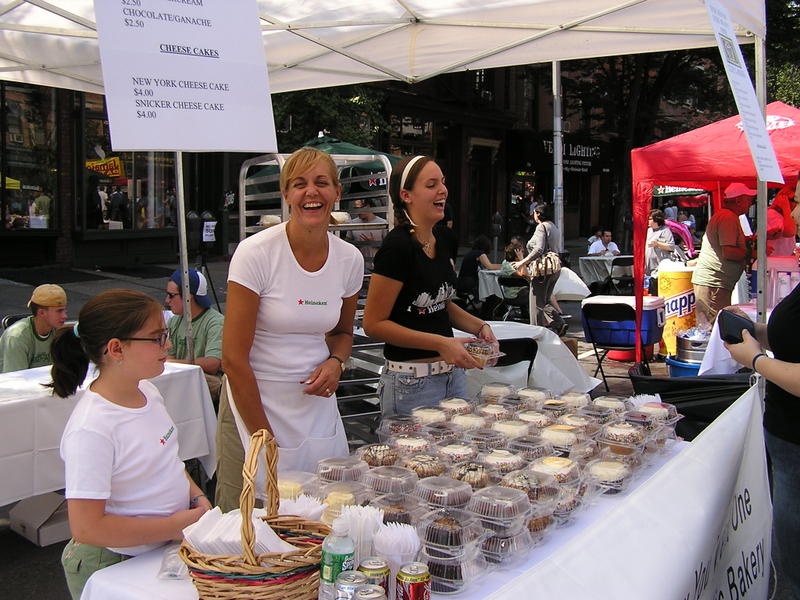 Some giggly ladies of all ages selling Downtown Atlantic Bakery cupcakes. (They are brilliant.  The cupcakes.) 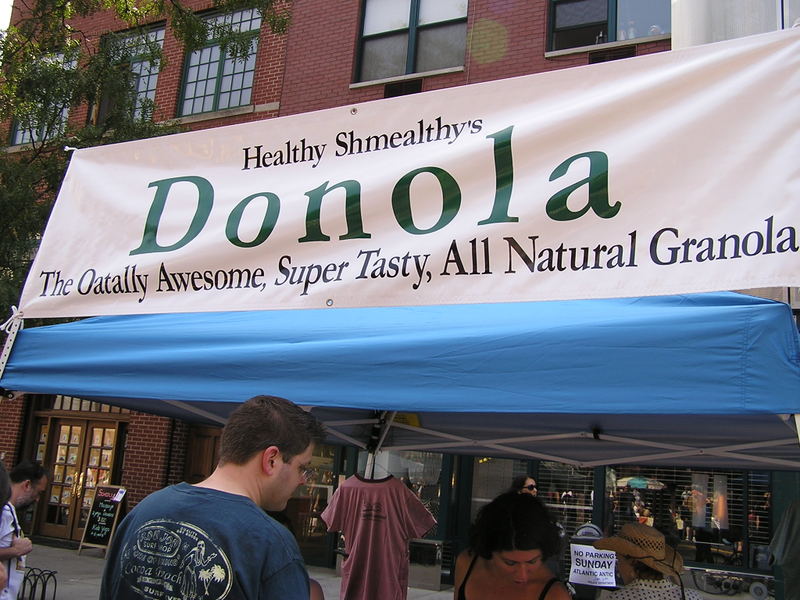 Oatally awesome.  When I took this picture the lady asked me if I was a spy.  I said yes. 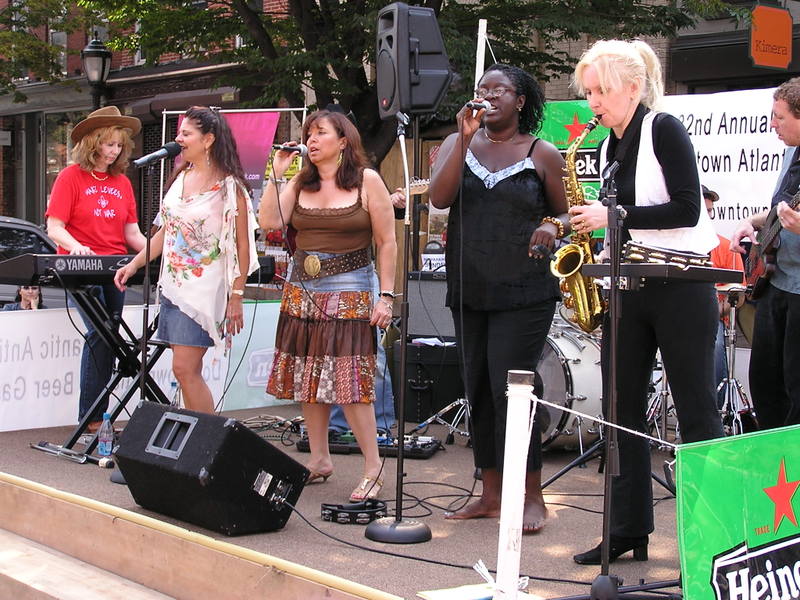 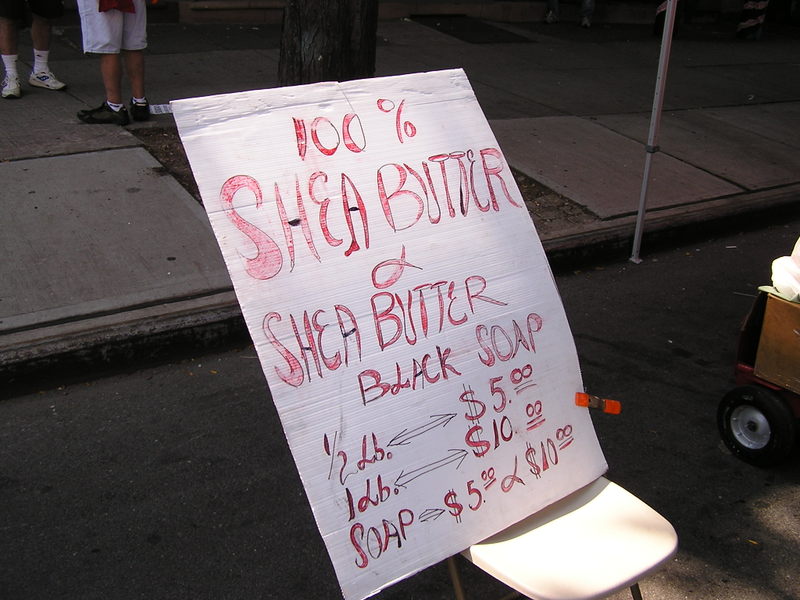 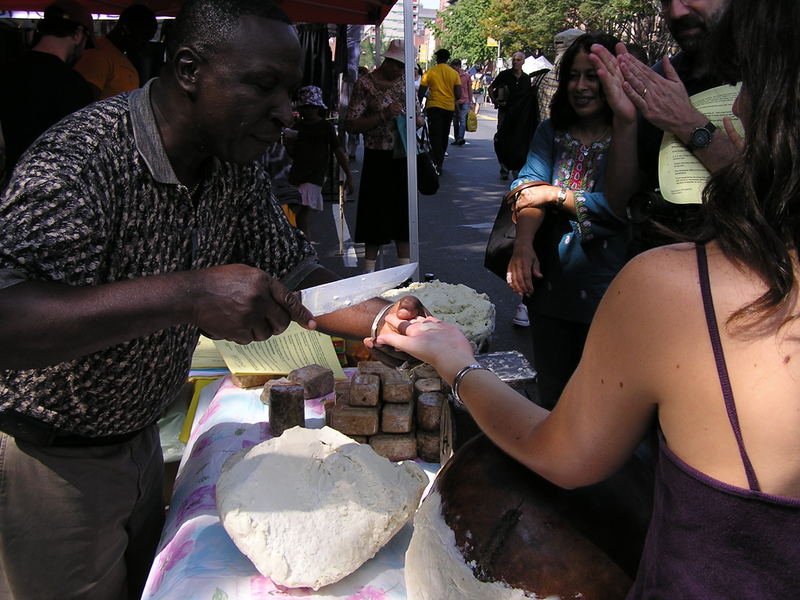 ~~ ...which Abby jumped at trying, even though the guy applies it with a large knife.  I didn't take any. 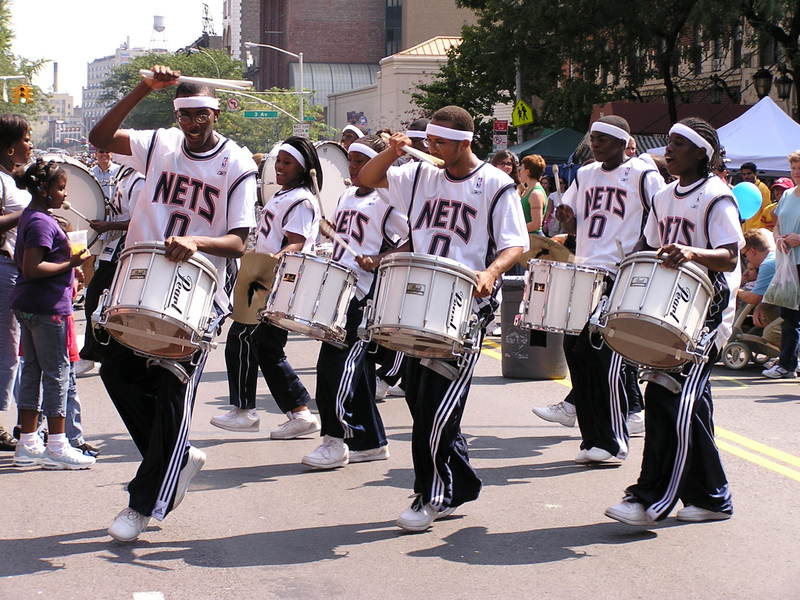 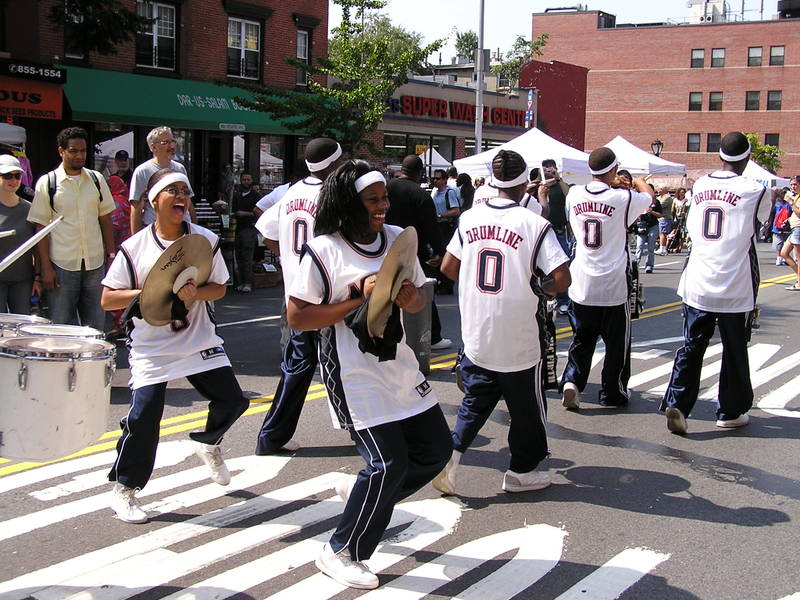 Though the guys outnumbered the girls, the girls had the loudest instrument. 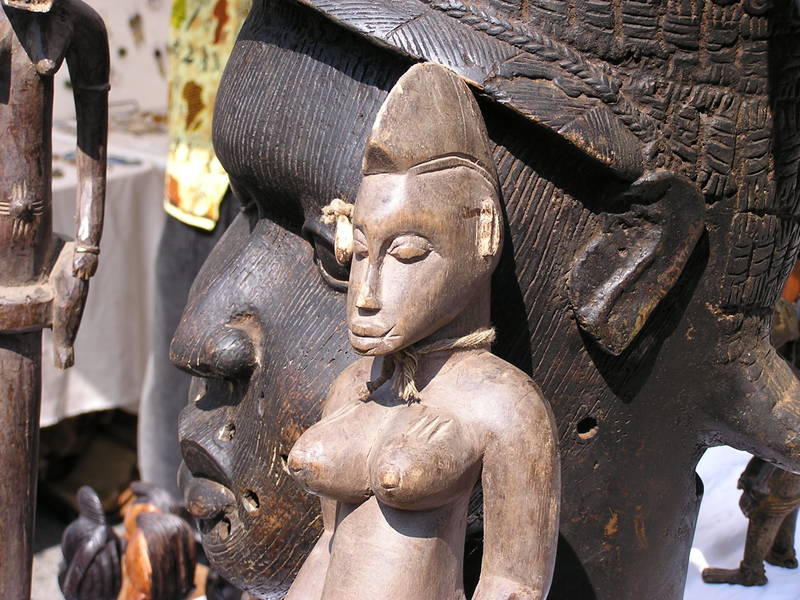 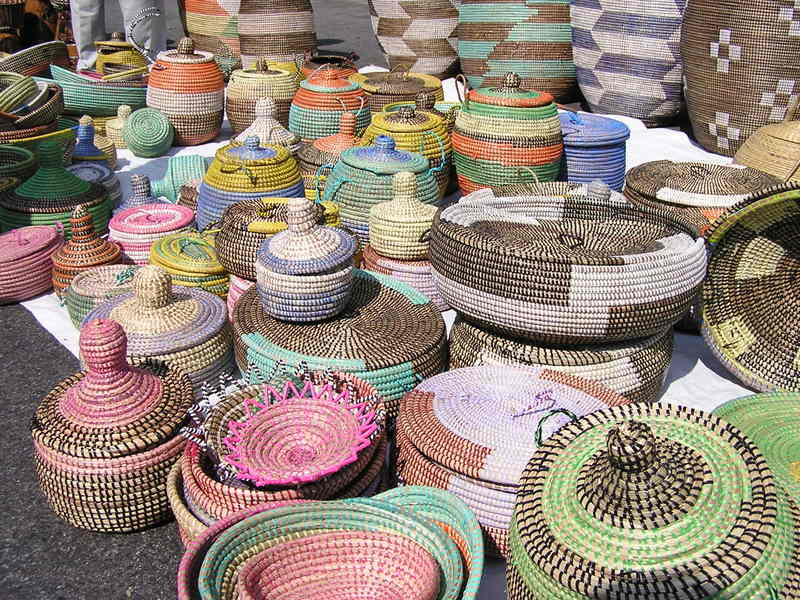 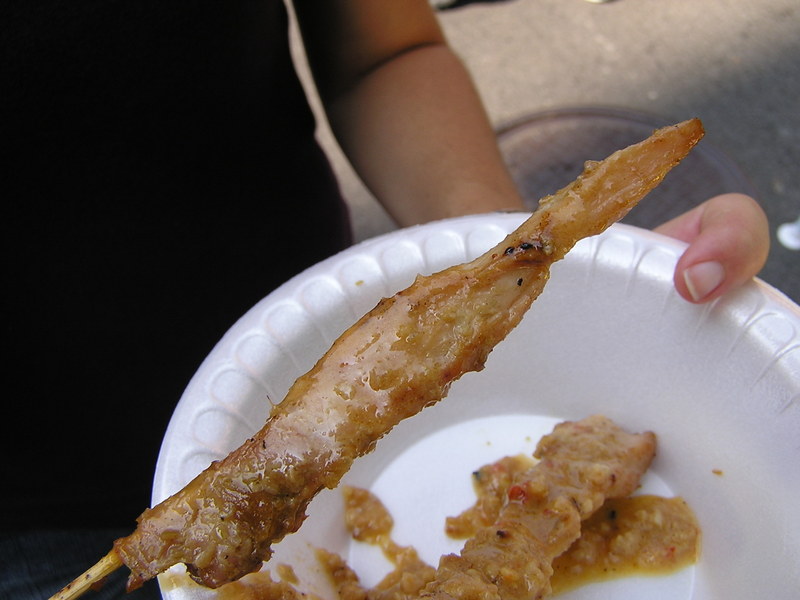 And finally back to the food.  I was not even close to hungry, but I couldn't take it any longer.  So I picked up some $1 chicken satay from Mai. 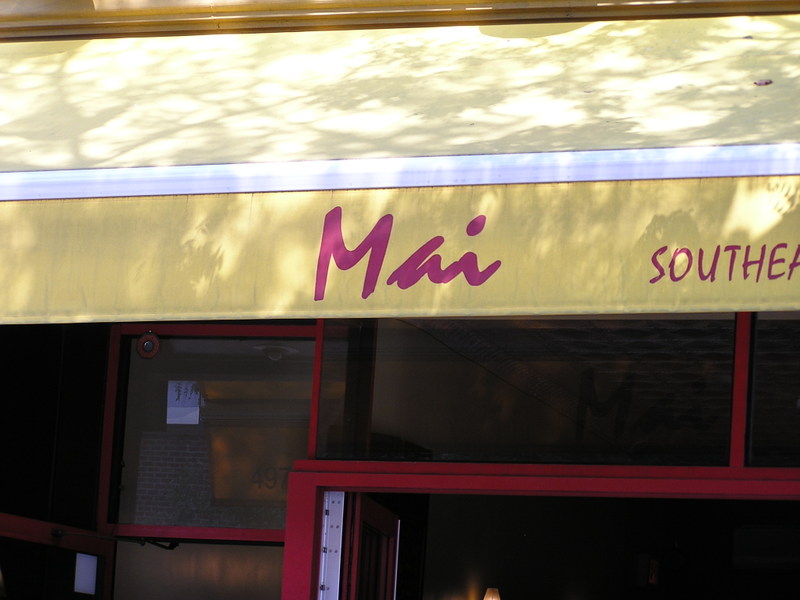 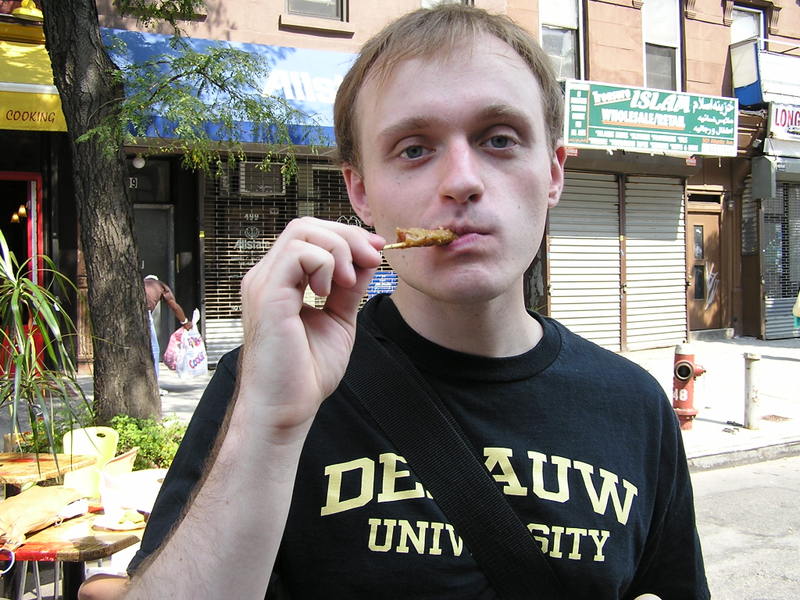 The chicken satay was a dollar, so I had nothing really to complain about except that I was on the other side of Brooklyn and needed some way to make it back.  Along the way back I stopped at A Cook's Companion and picked up a sturdy cast iron skillet, which we'll talk about later in the week, and will only say right now that it was really, really heavy.