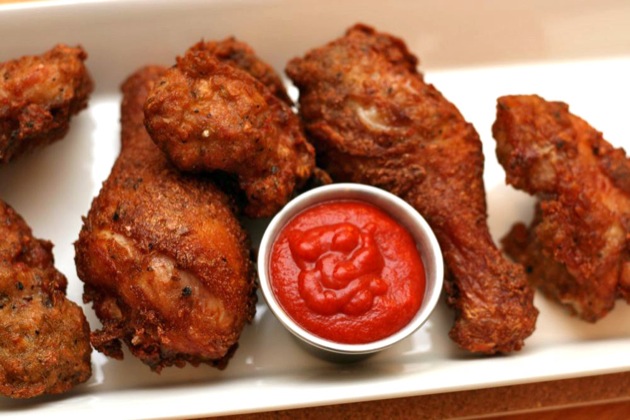 The crackliest chicken you can imagine.

I caught your attention with that title, didn't I? Well, the same thing happened to me, when I stumbled on a recipe in The Atlantic.com's food section in a post about Bangkok street vendor fried chicken--the recipe for which the author cajoled from the street vendor, then scaled down for use in the kitchen. And yes, he called it better than Southern fried chicken here in the U.S.

Bangkok is a fascinating place which I'd love to visit someday. The cuisine there encompasses not only the various styles of Thai cooking--Southern, Northern, Northeastern, and Central--but also neighboring cuisines from Burma, Malaysia, and especially China. I became particularly fascinated with the place upon reading a recent piece in a recent issue of The Art of Eating , the always-thorough and thoughtful food magazine that we've recommended in the past.

From the author's passionate words about this fried chicken, I was convinced to try it. He wrote about this food with deep feeling and respect, recalling the chicken's superbly crackly crust, a flavor imbued with fish sauce and cilantro and a hit of black pepper, and painting an image of a mysterious man on a bicycle with a propane tank who prepared it right in the street. 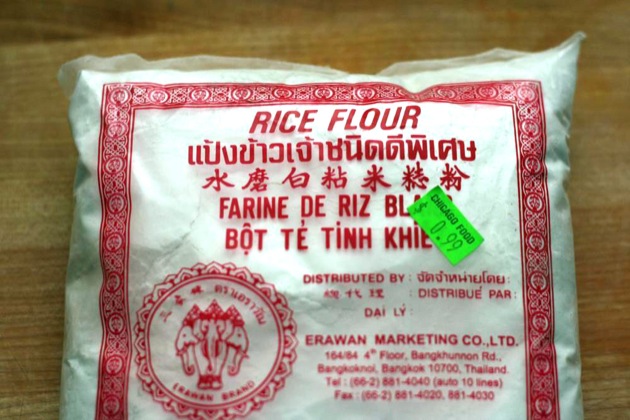 I went for the cheapest bag of rice flour

The key difference between Southern fried chicken and Bangkok fried chicken is rice flour. Rice flour produces a lighter result than wheat, and can give food a remarkable crispness (It's popular with gluten-free eaters, and some people even prefer a pizza dough made from rice flour because of that crispness). But it's been used in Asia forever in all kinds of dishes, and batter for fried chicken is one of them.

I don't know much about rice flour, but it wasn't hard to find at the local Korean market. I saw prices for the same amount of rice flour as high as $5.99 and as low as 99 cents. 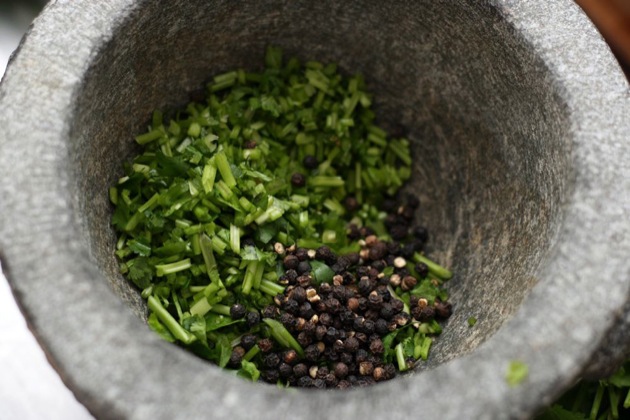 I prepared the recipe with great anticipation, allowing the chicken to marinate in heady mixture of cilantro stems, black pepper, fish sauce, garlic, chile flakes, chicken stock, and the all-important rice flour for 24 hours. Then I got some hot oil going in a Dutch oven and even dug up my thermometer to make sure I had the temperature right. I cooked it up and it looked fantastic.

But unfortunately, this story doesn't have a happy ending. Though everything looked right and the smell was intoxicating (rich and herby and definitely funky from the fish sauce), the chicken itself was disappointing . The crust was crackly, but it was actually so crisp that I couldn't really taste it. There was too much rice flour and not enough flavor. Know what I mean? Just like a cracker can be sort of tasteless compared to a piece of crusty bread, the flavor was frustratingly absent. Also, the batter was completely separated from the chicken meat, leaving an air pocket between the skin and the chicken itself--a sign of failure in Southern fried chicken terms.

I want to know what went wrong. Because it's obvious that Bangkok fried chicken has the potential to be transcendent -- one look at the ingredient list could tell you that. But I'm hoping someone out there has some experience with it.

While preparing it, one thing seemed off: in order to achieve a batter consistency for the marinade, I had to use almost twice the rice flour the recipe called for. There was so much liquid in the recipe that it was necessary, otherwise when I fried it nothing would stick to the chicken. I think that next time I'd leave out the chicken stock, so that less flour would be required. Maybe I also bought the wrong rice flour. Anyone an expert on the stuff? Have another recipe? Other techniques that I failed to understand?