What to do with a jar of barbecue's liquid gold? 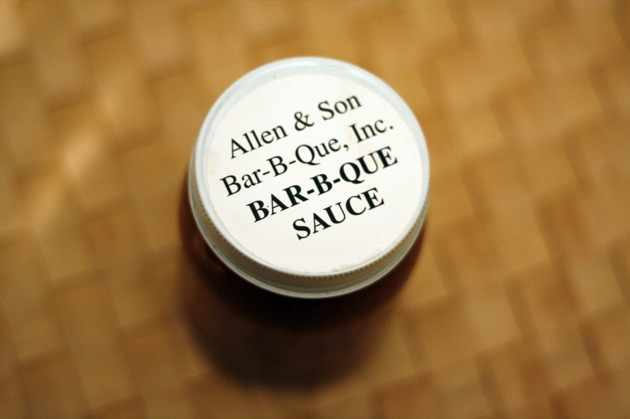 Moments like this don’t happen often. I recently met up with a friend whom I hadn’t seen in a while, when he handed me a white bag with something surprisingly heavy in it. He’d just gotten back from North Carolina, and while he had hinted at some kind of “precious cargo” in a previous e-mail, how was I supposed to guess that I’d look into the white bag and find the above jar staring back at me?

Now I have a problem. It’s not terribly life threatening—unless you count the fact that it involves barbecue, one of the greatest restaurants in the Western hemisphere, and a jar full of sauce. To be sure, this isn’t some random pitmaster’s sticky, sweet barbecue slop. 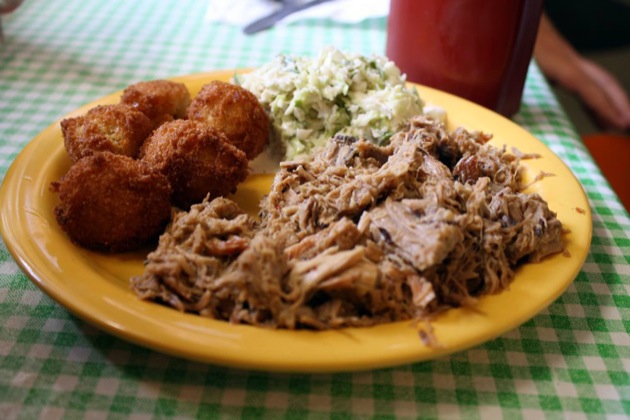 We're talking about Allen & Son, which was the pinnacle of a recent North Carolina Barbecue tour . Obviously this means that we're dealing with what might be the best barbecue restaurant in the whole country.

Yet, I live in Chicago, it’s cold, and I don’t have a smoker. So, how can I avoid desecrating the very good name of Allen & Son without digging up the garden in front of my condo, building a pit, and burning hickory wood for 12 hours straight? (We’ll stop right here and admit that this is my absolute dream, but I can envision a few issues with zoning, angry neighbors, and the plumes of smoke that would billow in through the windows. Plus my dog would freak.)

If we rule out flying to directly to Chapel Hill to procure some meat, which my wife has already kindly vetoed, I suppose I have two options. I could purchase some sauce-less pork from one of Chicago’s fine barbecue restaurants, or I could attempt to cook a pork butt in the oven sans smoke. Can you make even respectable barbecue in your oven? Both options are tricky.

The first one sounds the best, as it would ensure real barbecue with real smoke. But besides the seasoning differences of using another man’s rub, every Chicago barbecue restaurant that I know and trust makes pulled pork, not chopped. Allen & Son is the fine purveyor of chopped pork, and as I mentioned before , there is an enormous difference between the two. Pulled pork won’t do.

I could definitely get chopped pork by slowly cooking a pork shoulder at home in the oven. Please don’t yell at me just yet. Noted food scientist Harold McGee just wrote about cooking ribs in the oven for the New York Times , and brought up some excellent points about cooking the meat inside. I’d be able to perfectly cook the shoulder, cover it in whatever rub I wanted, and know exactly when it was done. Wouldn't this wonderful sauce be great with it? Of course, I’d be completely missing the hickory haze that wraps around every single bite of Allen & Son. This is what’s called a tough decision.

I need help. Has anyone used a jar of Allen & Son barbecue sauce at home without a smoker?