By Blake Royer Here in Estonia there is a word,... 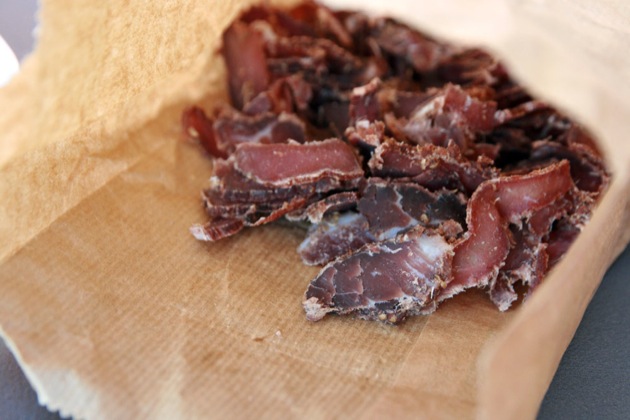 Here in Estonia there is a word, kevadväsimus , that translates as "spring fatigue."  It's the expression that refers to a grim mood that seizes us all when the sun has come out and the days are growing longer yet all other signs still point to winter.  We know the weather will improve, but it's that sliver of hope that makes it now harder to endure. For example, I just nearly lost three or four fingers to frostbite while walking up the hill from the grocery store to our apartment, and it's almost April.  I still have to wear two coats at once to keep from shivering.

My own kevadväsimus is compounded severely by the fact that I just got back from South Africa, where, though it's early fall, the weather is sunny and hot.  Cape Town is one of the most gorgeous places I've ever been--a windswept town nestled between the frothy ocean and formidable mountains.

While I was there, in search of local interesting food, I came across a cured meat called Biltong.  The word comes from Dutch, meaning "rump strip" referring to the cut of beef it's made from (the round or rump), and its shape.  It's traditionally cured in a large long piece, then sliced after curing into the pieces you see above.

At first brush, biltong seems a lot like beef jerky.  It's a salted and spiced strip of meat that's dried until chewy.  But mention beef jerky to a South African, and you're liable to get mean looks.  I heard from more than a couple people that "biltong is not beef jerky," and "there's not even a comparison between the two."  I didn't understand the hate, though I only have a casual relationship with beef jerky--your occasional gas station package mostly--so I didn't necessarily jump to defend it.

It wasn't until I tasted really well-made biltong that I understood their fervor.  It's fantastic stuff, pitched halfway between the tough chewy hardiness of jerky and the succulent subtlety of a cured meat like bresaola.  To be sure, it's meant to be a snack eaten without too much oohing and ahhing--but it's everything that beef jerky could be but isn't: steak-like, beefy, not overly sweet, tender, complexly spiced.

I brought myself back a nice bag of biltong, but it is slowly disappearing.  With no plans to visit South Africa again anytime soon, it seems my only option to continue this craving in my kitchen is to make my own.

I have some idea where to start after touring a factory in Cape Town and meeting an old school butcher making it the traditional way.  But if anyone out there has any ideas, I'm all ears.