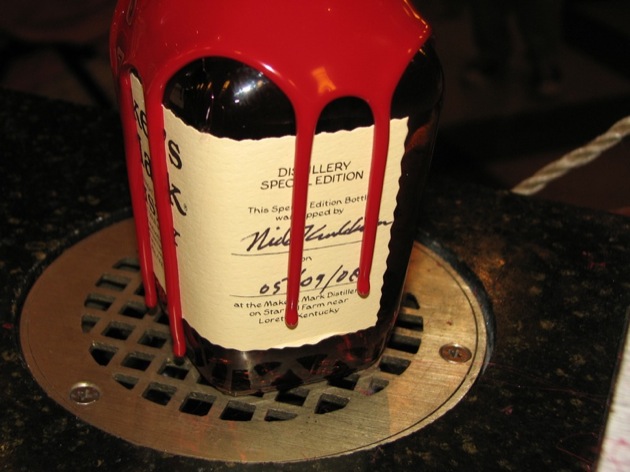 It's a tale of the old and the new.  Of the high and the low.  It's Wild Turkey and Maker's Mark , two bourbons I love, but couldn't be more different from each other.  The Turkey is a high rye bourbon made to grip your taste buds and warm your insides, while smooth and seductive Maker's Mark is the gentleman's choice, somewhat conservative and much more expensive.  Feeling guilty that I hadn't visited these two landmarks the last time I went south to Bourbon country , I convinced Blake to fly over and witness Kentucky firsthand.  He agreed. 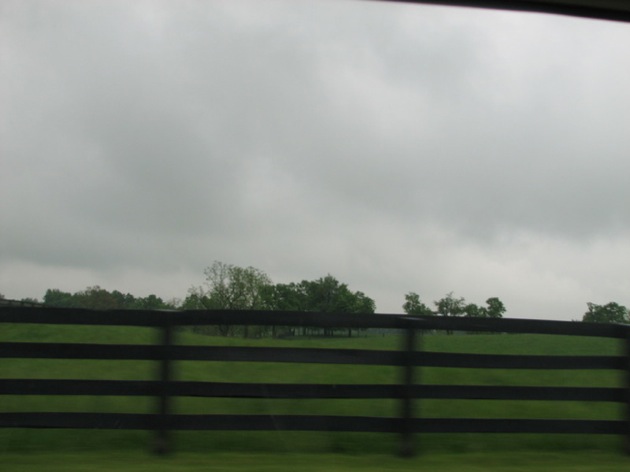 This Paupered Chef Approved Trip had modest goals.  We only had two distilleries we absolutely had to see, which meant we were going to take it slow.  That's the way it should be.  Especially around this time of year, when the green grass pops like an Irish countryside and the black fences roll on forever, Kentucky can calm your soul. 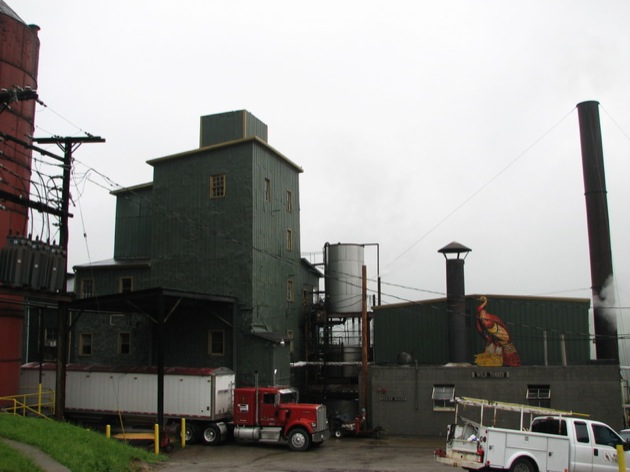 It's certainly a ramshackle operation.  The company video that starts the tour is shown on a small TV sitting atop a bookcase.  We sat on metal folding chairs. 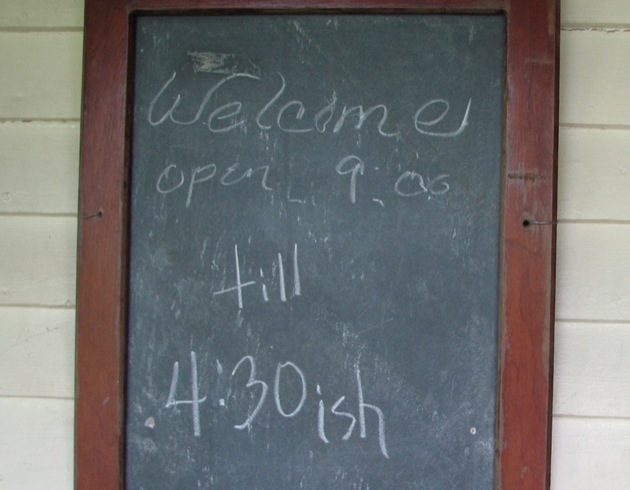 They write the hours for the visitor's center in chalk.  And what's "4:30ish"?  But this kind of haphazardness also feels endearing.  It's not a show, just an honest look at how this stuff is made.  As we began to leave the visitor's center to head to the distillery, we were greeted in the doorway by Jimmy Russell , the master distiller and living bourbon legend.  His name graces the Russel's Reserve line.  I'd heard about him for awhile, and it was fascinating to see him hanging out at the distillery like it's the most normal thing in the world. 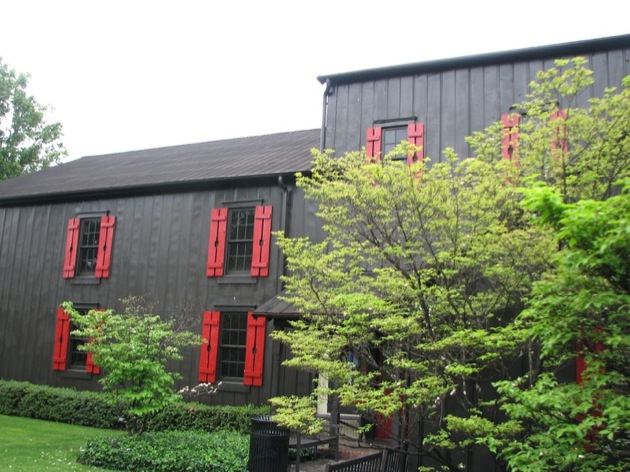 Which couldn't be more different than Maker's Mark.  It, much like Woodford Reserve's tour , runs professionally, on time, and with great dramatic effect. 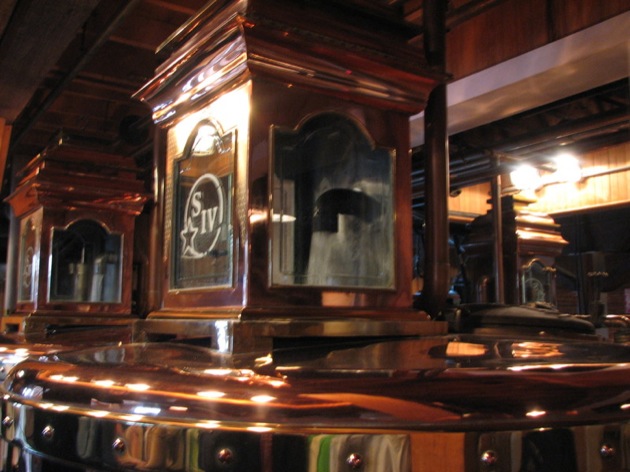 All of its facilities have a fresh coat of paint and the copper pots look like they had just been spit shined. 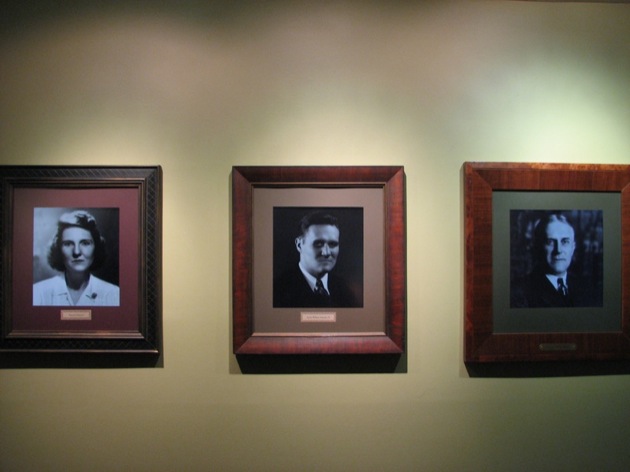 Instead of meeting the distillers, we stared at digital portraits of the Samuels family.  Every minute or so, the still portraits would jump to live and discuss some of the history of the bourbon.  Sounds kitschy and inauthentic, but I stared like a fool for nearly ten minutes waiting to see what they'd say next.  It's funny. In the front room, a rotary phone will ring.  If you pick up a mock call ensues.  I couldn't get enough.

Just like Woodford Reserve, that slickness is also professional courtesy, and the Maker's tour outshone the Turkey in nearly every way.  Our guide knew his stuff, and answered every single question as thoroughly as he possibly could have without losing the majority of his tour goers.  We spent at least 30 minutes after the tour ended picking his brain about the spirit, mixed drinks, and where to eat in Louisville, and he couldn't have been nicer. 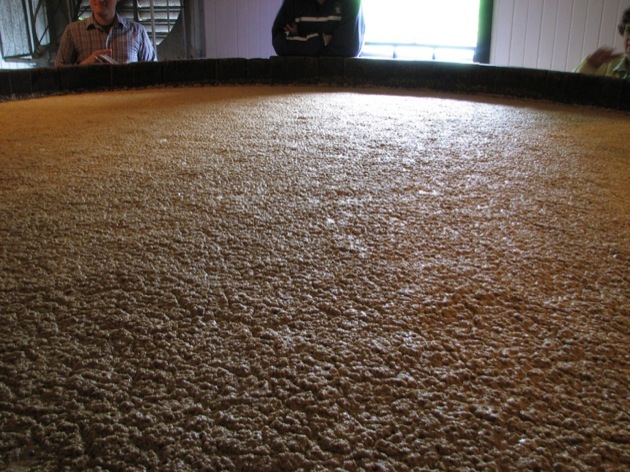 Perhaps the biggest difference between the tours happened in the fermentation room.  Wild Turkey forbade any pictures inside the plant, while Maker's Mark encouraged as many pictures as you could take. 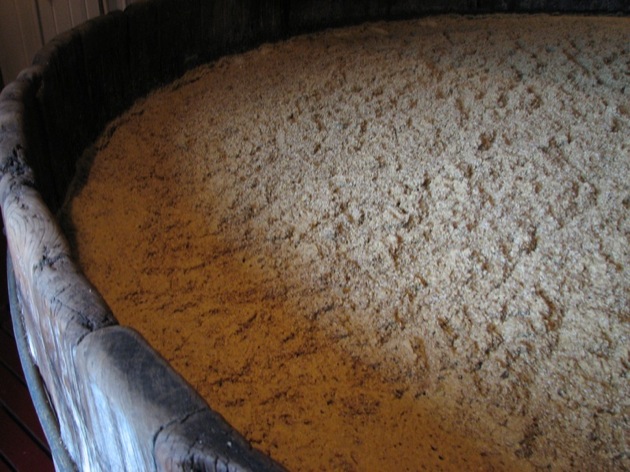 I've stared down a lot of fermentation tanks on the various bourbon tours, but what we did in Maker's Mark was unique.  Instead of just gawking at the enormous bubbling cauldrons of grain and water, the tour guide had us dip our finger in!  Really.   Apprehensive at first, after seeing a few people dip in and not lose their fingers, we joined in.  They had various tanks at different points along the fermentation process, so we walked around and tasted every one.  On the first day, the brew tastes very much like grains mixed with water - nothing special.  By the end of the day when the alcohol starts to form, it naturally warms up.  And we stuck our hands top the grains to feel the heat.   By day two the brew tastes less like separate components, and more like drink, albeit a fairly unpalatable one. 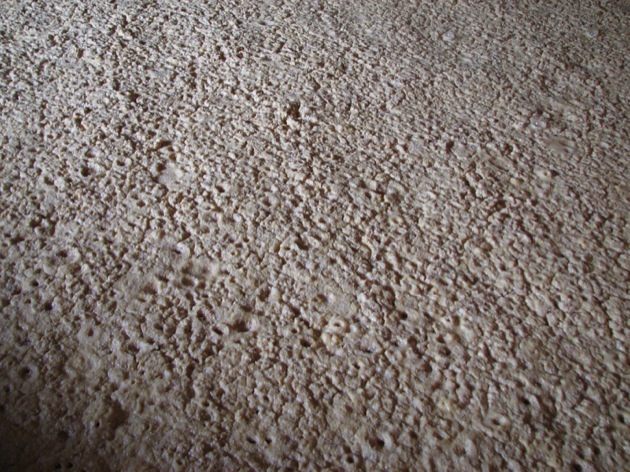 By Day three the brew is a dead-ringer for nasty stale beer.  I knew that this process was essentially the same process used to make beer, but it is so completely odd to be able to taste that transformation and have it remind me of the crap I ingested in college.  I couldn't believe that this would turn into Maker's Mark.  But by day four, all those harsh tastes had rounded and it started to take on a sweet and smooth texture.  From here the brew gets distilled twice, and then aged in new charred oak barrels. 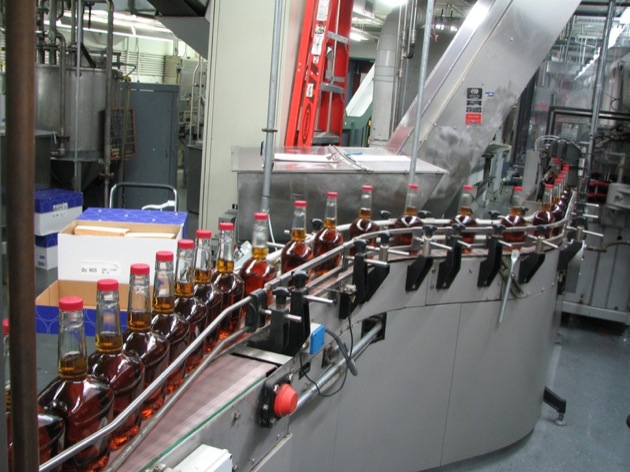 Wild Turkey isn't bottled in Kentucky, but Maker's does everything in house, which means we could see the famous dipping of the bottles in wax.  For years I thought the distinctive top to Maker's Mark bottles was a fake plastic top they stuck on top to mimic a real dip. 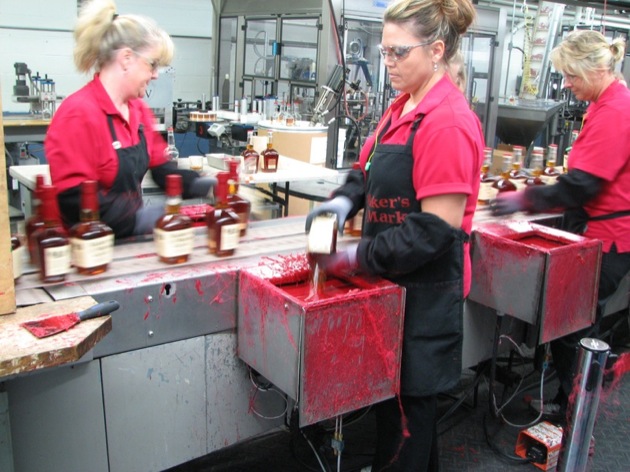 But inside the bottling warehouse a group of ladies stood on an assembly line and hand-dipped every single bottle. 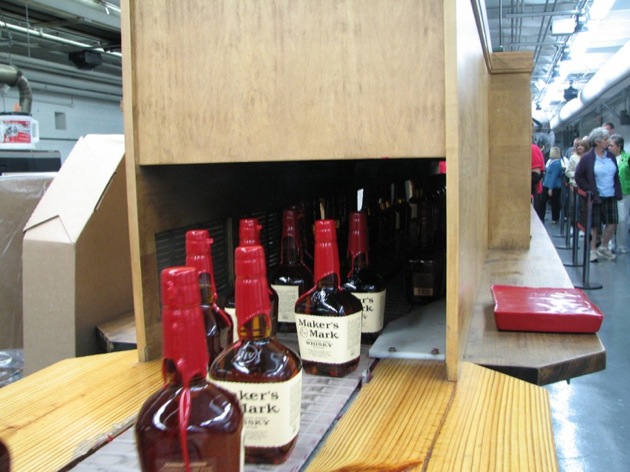 It's an odd feeling to realize that every bottle they sell comes down that line. 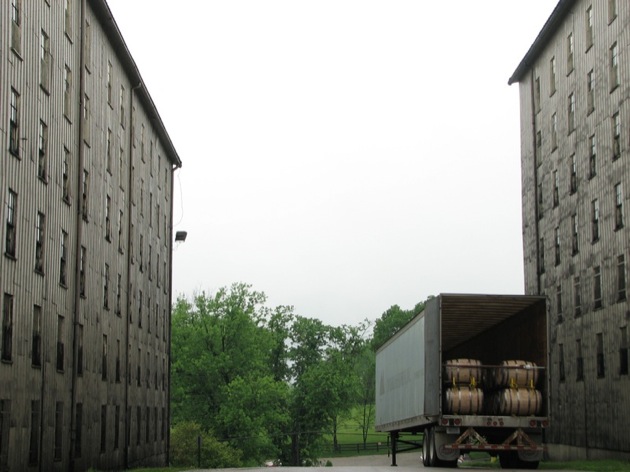 Wild Turkey houses all of its bourbon in enormous warehouses that give off an eerie concentration-camp vibe.  It's still a blast to walk in and smell the "angel's share" (the bourbon that evaporates from the barrel), and dream about all that bourbon waiting for the bottle.  But, much like the rest of the tour, Wild Turkey is all about getting things done, and not about aesthetics.

All of Maker's Mark's warehouses are as well painted as the visitor's center.  We entered one of the smaller ones noticed a noticeable lack of angel share in the air.  After a brief pitch about buying a barrel, we walked towards the middle and only then noticed the warehouse only went halfway back.  Much like Willy Wonka's Factory we stepped through a door and into this: 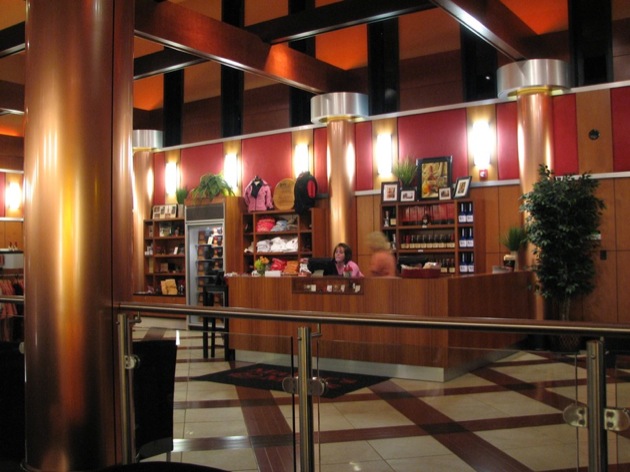 We lined up at the long bar, carefully sipped our tiny sample, and then perused the gift shop.  Wild Turkey, by the way, didn't give us a sample (we're still a little bitter. Though in all fairness, it was before noon). 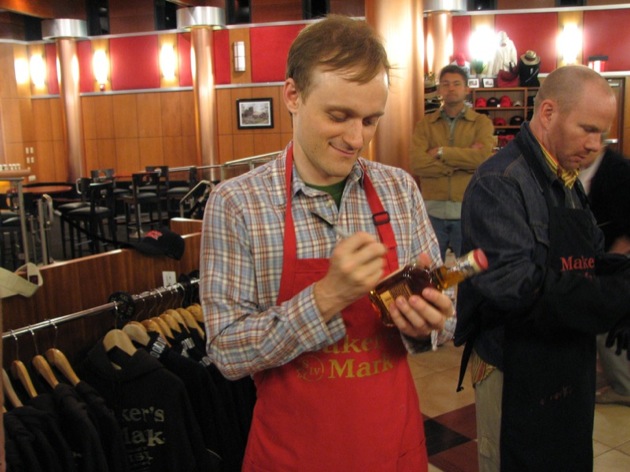 The big gimmick of the tour is that if you buy a bottle you can hand dip in wax.  I couldn't resist.  I signed the bottle for posterity. 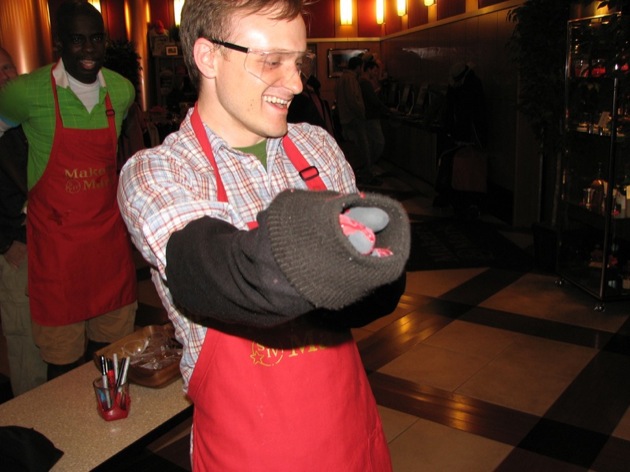 I donned the apron, eye gear, gloves, and slipped on some long sleeve covers.   This was serious. 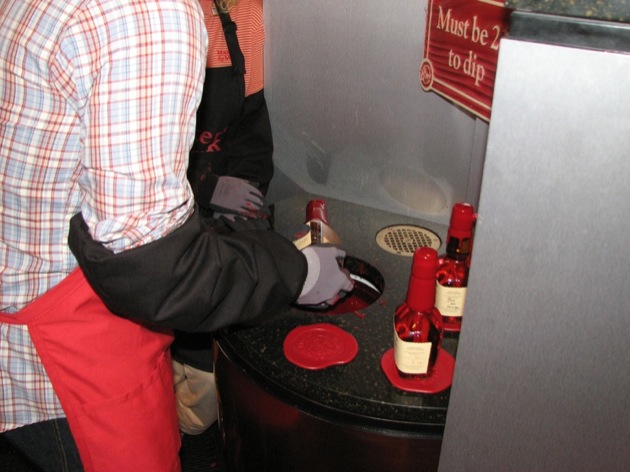 Gripping the bottle by the bottom I dunked the neck all the way down in the red wax, pulled it out, turned it sideways, and then rotated the bottle so the wax would fall uniformly. 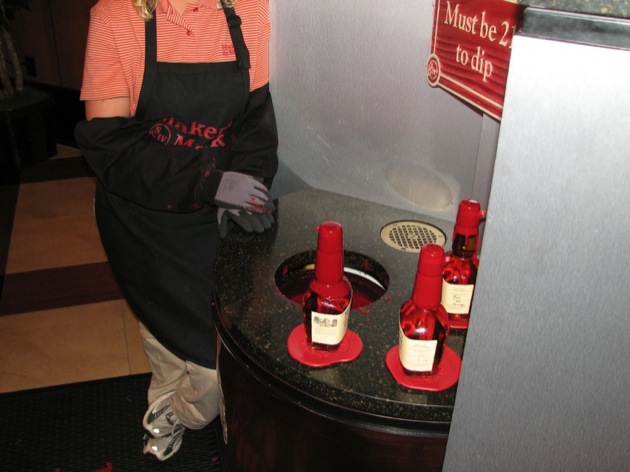 Then I slammed it on the counter and watched the wax fall. 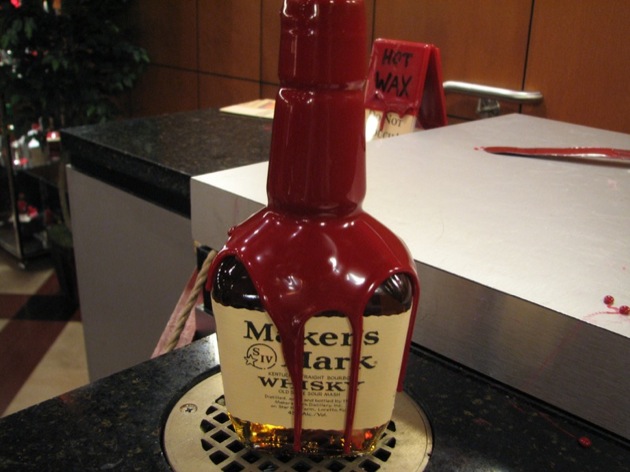 I did an aggressive dip instead of the normal quick neck one.  It was more fun.

After a quick cool, the bottle was ready to go.  Not exactly a necessity in my quest to learn as much as I can about bourbon, but certainly fun.   And that's what these tours should be.

Enjoyment is relative on these tours.  Both are completely essential.  Wild Turkey makes some wonderful bourbons and visiting that distillery is probably a more accurate representation of the bourbon making experience than Maker's Mark hifalutin show.   It did prove how valuable a great tour can be, and Maker's Mark was excellent.

Just a couple more distilleries I can check off my list.  I still have many more to go.  I'll be back soon.