Guanciale, Or How to Hang a Pig Jowl in Your Living Room

The other Italian bacon. 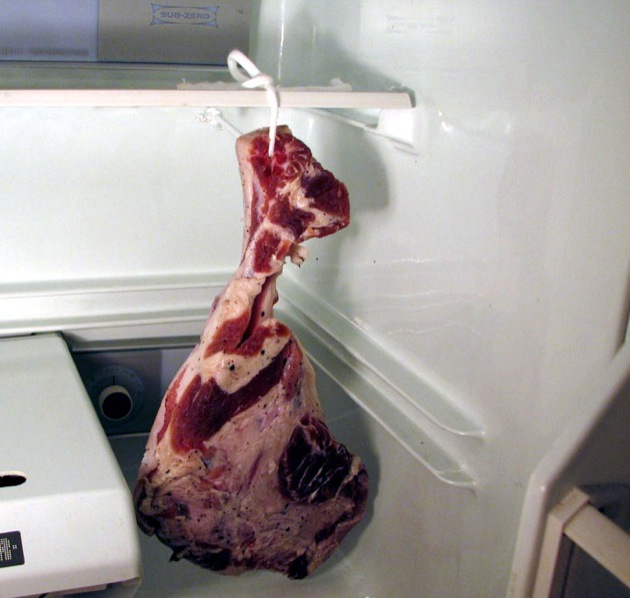 It took me almost a month and calls to half the butchers in New York before I could get my hands on a pair of pig jowls.  Here’s the problem: they want you to order the whole head.  And while I had a wonderful time watching pot-roasted pig heads go ferrying by my table at the Spotted Pig , when it was under the tutelage of British chef Fergus Henderson , the thought of lugging a 40 pound hunk of decapitation around the city was—albeit just barely—more than I could handle.  Then there would the problem of butchering out the jowls from the head myself, a job that I would surely botch.  Then there is the problem of expense.  And disposing of what was unused.  And the fact that my landlords, as wonderful as they are, happen to be vegetarians. I really like my apartment.

Why pig jowls? I wanted guanciale , one of the world's famous bacons--yes, there's more than one!-- favored by Italians and especially Romans.  It is the true ingredient in authentic, no-cream carbonara.  I’m already a carbonara devotee , and I eat it constantly.  Yet, somehow, as bowled over as I’ve been over what happens when bacon, eggs, cheese, pasta, and pepper combine, I still haven’t gone beyond regular old American belly bacon when preparing carbonara.  Guanciale--made with the pig's triangular cheek--is apparently a fattier, subtler, overall more piggy version of bacon.  In Italian, the word guanciale means pillow.

A recent discovery of a discarded fridge procured from the sidewalk helped matters along.  I’d been looking for this kind of thing for some time, a place to hang cured meat to dry.  So far my curing projects have been limited to the salt-curing stage, which happens in a bag in the refrigerator, when the use of a drying chamber hasn’t been necessary.  It weighs at least a hundred pounds, but it did happen to fit perfectly in a little nook in my living room.  The only problem is that, stupidly, I didn't think of the fact that it might not work.  It doesn't.  It makes a lot of noises and sputters when I plug it in, but the chamber itself gets no colder.

The wondrous guanciale has only begun to surface in the U.S., evidenced by the jowl shortage which left me, even in New York City, having a hard time.  One or two places sell guanciale in the city, including Salumeria Biellese , but nobody seems to sell the fresh jowls to make it. Fleisher's , the upstate butcher famous for its wonderful Berkshire pigs , whose belly I cured for the first bacon post , sells all its jowls on standing order to a Manhattan restaurant.  I wanted the jowls of a heritage breed pig, which would guarantee excellent flavor and lots of essential fat.

I turned next to the farmers’ markets. Flying Pig Farm raises fancy hogs, but they make their jowls into liverwurst or something.  I was told that, at some point in the year, I might be able to buy 6-8 jowls all at once, frozen, but this wasn’t th right time of year. Eventually, after sifting through the vendor listing at the Council on the Environment of New York City ’s website, I discovered Violet Hill farms at the Union Square farmers' market.  They didn’t carry jowls regularly, but “might sometime.”  I took their phone number, as well as instructions to call every Tuesday to inquire about what was happening to the cheeks of that week’s pigs.  For awhile, I had no luck--the heads were being sold to other people, or being made into sausages, or what have you.  Finally, two weeks ago, I arranged to pick them up on a Saturday and began preparing to research what I would do once the jowls were home in my fridge. 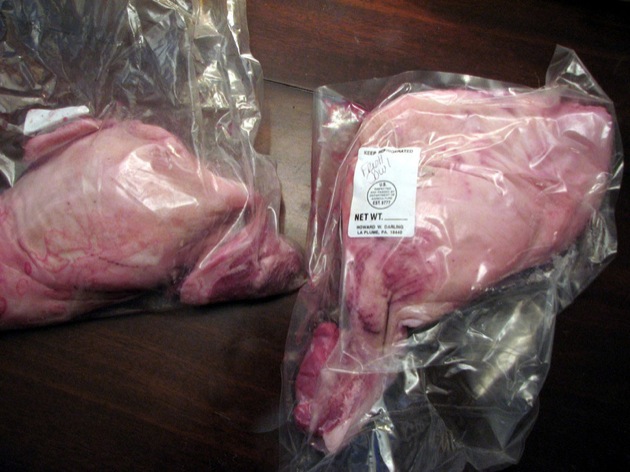 My recipe sources came from Michael Ruhlman and Brian Polcyn’s Charcuterie , an essential guide, as well as from Mario Batali’s Molto Italiano . Actually, the recipes are almost identical—thyme is the essential spice, and both salt and sugar are used (along with peppercorns). Batali makes no mention of pink salt , a sodium nitrite mixture which minimizes botulism risk and preserves the red hue of the meat (it’s also controversial).  I used it with my bacon as well as this time, because I’m definitely an amateur and Charcuterie recommends it. 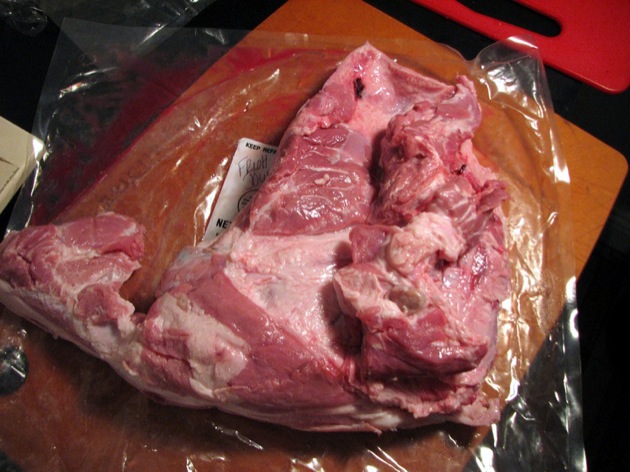 The process began as all projects have so far begun: with salt, spices, and the refrigerator. 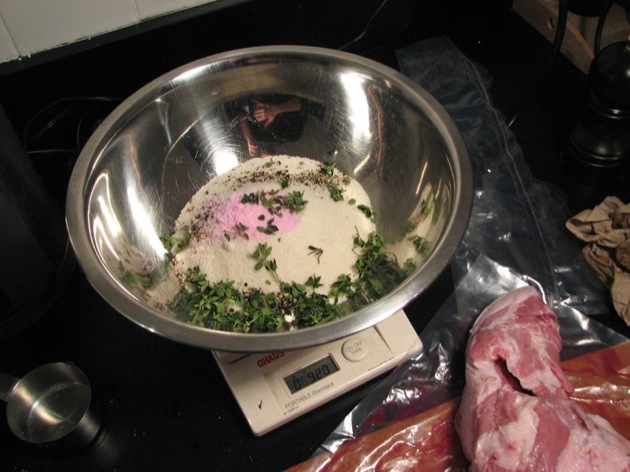 First, I froze one of my two jowls for later experimentation, and unwrapped the one I would be using. Charcuterie talks about the importance of removing glands on the jowl, so I picked it over carefully and cut away anything that didn't match the rest of the meat and fat.

Then I coated it in the mixture for dry curing: equal parts salt and sugar, crushed black peppercorns, some springs of thyme, and the pink salt. Once rubbed with the mixture, the jowl goes into a freezer bag and is allowed to sit in the salt for 4-7 days, or until it feels stiff all the way through, rather than squishy.  Every other day, the bag should be flipped to redistribute the cure over the meat. 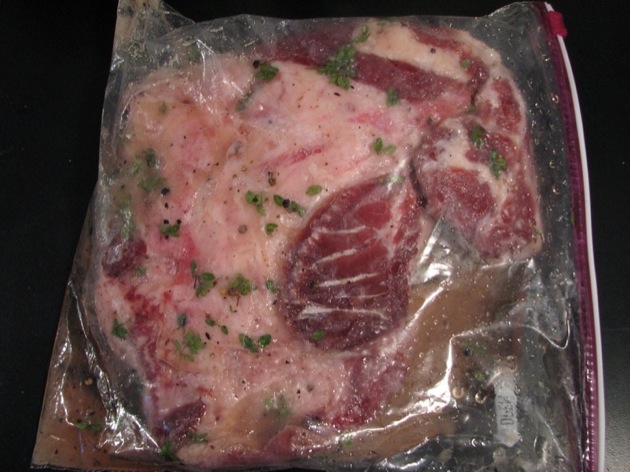 A great deal of liquid should begin collecting in the bag, which is the result of the salt pulling out the meat's moisture, preserving it and making it in hospitable to bacteria which might spoil it.  When I was finished curing, there was almost one cup of brine in the bag. 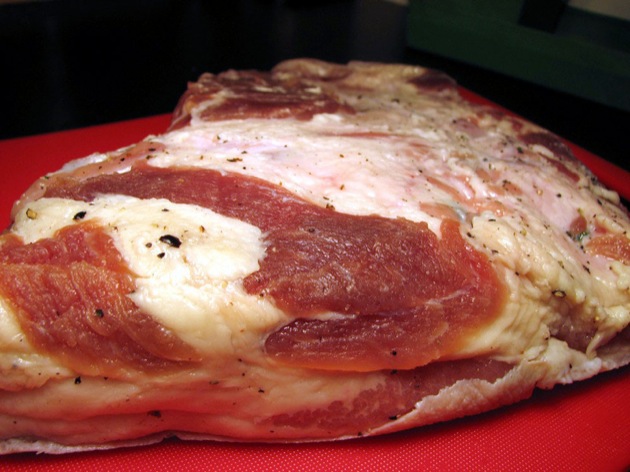 At this point, the surface is a little tacky, and the whole thing feels stiffer than fresh meat.  The jowl is just like my "fresh" bacon from last post : salt-cured, but not smoked or dried.  I ate much of that bacon from the last post in this state.

But guanciale requires drying, just like pancetta.  This is where things get tricky: finding a good place that is cool and has the right humidity.  In the case of drying salami or other sausages, you want a relatively moist environment to keep the casings from drying out, which is where an extra fridge comes in handy.  However, I'm not sure if this high humidity is necessary for guanciale.  Nevertheless, I mixed up some bleach and water to sterilize the inside of my found fridge.  Then I found some string and rigged up the best hanging situation I could manage.  I was leaving town the next day, so I shut the fridge's door.

When I returned and opened it, the humidity on my hygrometer read 81% -- far too high.  In retrospect, closing the fridge door wasn't the best idea, because the jowl had no ventilation--and like I said, the fridge doesn't work at all.  At this point, the meat still smells fine, not at all spoiled, so I think the salt preservation has worked so far.  But I'm worried that the weather is getting warm.  Lately I've kept the door open at night and closed during the day.  It's something of a race against the warm weather.

According to both recipes, once salt-cured, the jowl needs to age for 1-3 weeks, depending on humidity.  We'll see how long mine lasts.  I'll follow up with another post, reporting success or disaster.

UPDATE: The Guanciale was a smashing success, though with a few hiccups.  Read the story at my follow-up post .