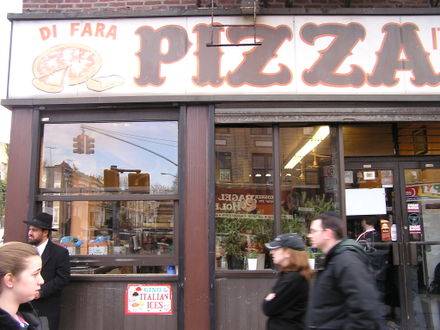 Unfolding the MTA New York City transit map to reveal the uncharted Brooklyn belly beyond Prospect Park, we spotted a subway stop adjacent to our destination in Midwood, Brooklyn, New York.  We’d read about a small Italian man who, year after year, wins awards for his pizza--sometimes including declarations that it’s the best to be found in New York.  On a Sunday morning we tunneled down to Union Square, transferred to the Q line, and squinted our eyes as it came up out of the underground, climbed the steal girders of the Manhattan Bridge, and afforded us sweeping views of the East River and Brooklyn.  As various neighborhoods swept by, the train gradually emptied.  In thirty minutes we were getting off the elevated train and stepping down the stairs onto the sidewalk, hearing it pull out of the station and rattle, echoing in the steel framework above us.  The largely hassidic Jewish population, along with families, fathers and sons, were out for the sunny, above-average warm weather.

There's no line to place an order.  There's no place to pay...everyone is basically looking at each other.

Di Fara’s is just a block from the subway stop, on the corner, nondescript but hard to miss.  The sign is a somewhat faded, off-white color with red and brown lettering; the windows are large and wide with various herbs growing on the ledges, and opened a crack to allow smoke from the oven to escape.

It took some effort to get inside, as a few people shuffled around to allow the door to open.  Here’s how things go when you walk into Di Fara’s: First, you stand around for a few minutes.  People notice you’re confused but don’t really know what to say--they’re not so sure what’s going on either.  Second, you notice there’s no line to place an order.  There’s no place to pay.  The old, hunched Italian man--who is stretching dough, spreading sauce, distributing mozzarella, glugging olive oil, putting the concoctions in the oven, taking them out, using scissors to cut fresh basil and oregano over the bubbling pies--has yet to pick his head up.  Third, no other employees are anywhere in sight, and everybody is basically looking at each other.  “Is that your pie he’s making, or mine?”  The phone begins to ring, and no one seems interested in answering it.  Then, from a hidden corner, a younger version of the old hunched Italian man comes into the kitchen.  You watch from the back corner as he take a few orders, writes them on pizza boxes, ignores the phone, then disappears. 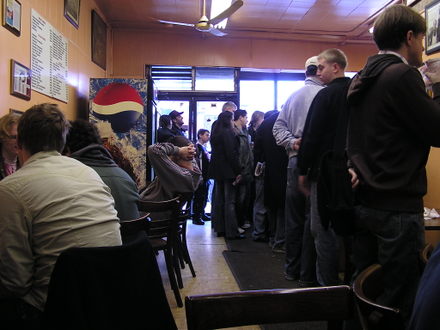 It looks like any other pizza joint in the city--old oven takes up most of the space behind the counter, decor is something out of the late 70s--except the line doesn’t move, or there is no line (we’re not actually certain).  A crowd stands between you and the counter, and it’s as thick as an all-admissions rock show, front-row center.  People are antsy, words are exchanged.  Some politely remind Mr. DeMarco of their order.  He assures them by mumbling that he knows.  His son walks around like a nervous wreck, always on the edge of falling apart, but never quite doing it.

Mr. DeMarco is the master of ceremonies in this pizza play, and he will do as he pleases.

It’s midday on Sunday, like we mentioned.  Breakfast had not been had.  The plan had been to walk in, order the slice, take a nice picture, and leave.  About 45 minutes into the wait with absolutely no sign that he has either made the pizza nor registered that we put an order in, our faith, admittedly, began to shake.  Blake holds his own in the crowd while Nick ducks out to Dunkin’ Donuts for two coffees. More hunger.  Sinful, personal thoughts of “Is this really worth it?”  A bagel shop across the street beckons.  Something makes us stay.

His hands are charred and thick, like a farmer's hands.  He never meets a customer's eyes.  His vibratic voice stutters back and forth in a half mumble, unlike the cock-sure Neapolitans who sing every word.  He is in control, but only like a painter is over a canvas that other people endlessly critique from a distance.  He never jokes with his customers, and at times it seems like he would like them to disappear.  There’s no question: this is some kind of art, oddly public.  Customers can watch every single move he makes.  The bar induces people to become voyeurs of his style.  We watched like hawks.

When the pizza is ready to be taken out, DeMarco reaches into the oven with his bare hands, lifts up the sides, and checks to see if there is a sufficient amount of blackness on the bottom.  Then he removes the bubbling pizza and realizes he has nowhere to put it.  A few pans are stacked around.  Some go on the countertop and the crowd draws back some.  He finds a spot and begins phase two of the pizza making process.

A hunk of Parmesan grinds in his medieval, hand-crank grinder, then he takes a handful and spreads in liberally across the pizza.  Then he picks up a bundle of basil tied to oregano and, with a pair of scissors, proceeds to incrementally cut shreds with gentle, slow care, on the bubbling cheese.  This takes an absolute eternity.  Ten people still haven’t ordered.  Ten more are waiting for theirs to be made.  Only when he is satisfied is the box closed, the bill added up mentally, the money exchanged, and the ordeal complete.  Eye contact is rarely made.  His attention to detail stretches the line of patience, but in every aspect there is detail.  The man makes every single pie that is passed over the counter, every hour of open business.

We watch as this happens time and again, eagerly anticipating when it's our pizza, our money exchanged, and ourselves eating.  Finally, around the one-hour mark, a cheese-only pie comes out and he starts cutting it up into slices and putting them individually on plates: the long-awaited slice pizza.  They are quickly snatched up, we pay, and then collapse into two chairs in the corner by the boxes of tomatoes and stare at this: 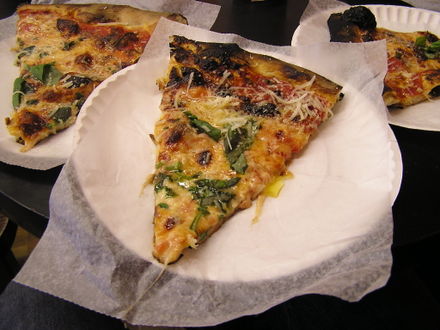 Any food at this point in time would have been welcome.  But to come face to face with this piece, this perfectly constructed slice, was something like sitting down across from a first-rate celebrity.  We stared for a couple of seconds before hurriedly breaking out the camera for a myriad of up-close and personal shots.  After the excited phase ended, the camera was stashed away and the slices were in our mouths.

It’s grown-up pizza, for sure.  The salty Parmesan melts into the creamy mozzarella.  The earthy basil bites at the clean tomatoes.  The perfectly thin crusts fights with large blacked bubbles scattered around the edge.  It’s surprisingly substantive, a mouthful.  It's a mess, an exaggeration, and an epic event.  It was the best pizza we’d eaten in our lives.  Please don’t make us try to describe it any more--it feels futile to do so.

There’s something to be said for the way DeMarco uses the Neapolitan pizza and stretches it with the New York sensibility.  All the important ingredients are imported from his hometown in Italy, but the pizza does not taste like nor follow the strict instructions for Neapolitan pizza (called D.O.C. for Denominazione di Origine Controllate, established by the Italian government ). The oven is conspicuously not brick or charcoal.  It’s damn hot, but gas nonetheless.

Di Fara pizza feels authentic in a standard that it’s made all on its own--both traditional and inventive, a class by itself.  This is the part of the story where we tell you “get on a plane immediately (a subway, if you’re lucky) and eat a slice of this."  You may as well order a whole pie; takes the same amount of time.  Just have a snack before you leave. 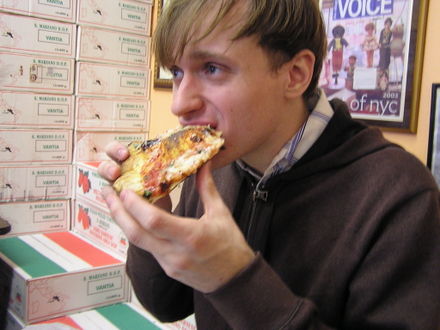