Dipping Into the Italian Beef

The mystery is that while the sandwich's meat is incredibly tender, it isn't made from some expensive cut of beef.  From the research that I've done, most Italian beef recipes call for round or the sirloin tip, which are both tough and lean cuts.  The use of a cheap, neglected cut really interested me.

At first glance, the sandwich looks a lot like a cheese-less Philly cheesesteak.  But I've been to Philadelphia, and seen the sandwiches made from thinly sliced ribeye and other cuts that have a lot of fat.  All they have to do is thinly slice the meat and toss it on a griddle and it is ready to go.  And don't get me wrong, they are absolutely delicious. 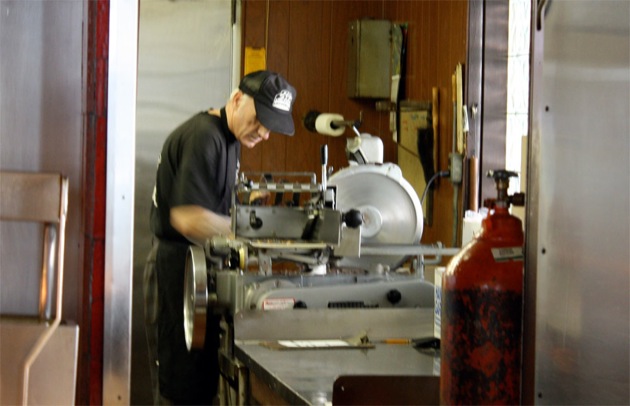 But the Italian beef has to be treated with a little more care or it will dry out into an inedible rock hard hunk.  It's usually slowly roasted first with loads of garlic and herbs along with some liquid, and then left to cool.   Then the meat is thinly sliced and only right before it is served is the meat reintroduced to the juice.  I caught this picture of a man in Al's that was slicing the roast during service.

Though I usually pass on the sweet peppers, something about the giardiniera really does something for me.  I'd never even heard of giardiniera until it appeared on an Italian sausage I had at Hot Doug's one time.  It's essentially just pickled vegetables that are vinegary and incredibly spicy.  I'm addicted to the stuff, and I think that's what got me fascinated with Italian beefs in the first place.  I love how the condiment really accentuates the taste of the meat instead of trying to just cover it up.  It reminds me a lot of Chicago's insistence of leaving ketchup off of hot dogs. 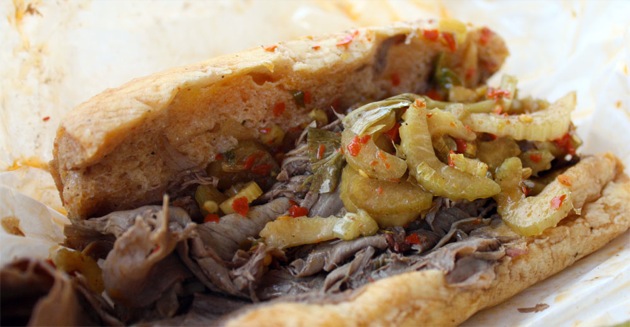 It's just that vat of juice they dip the sandwich in that has me confused.  It's such an integral part of the sandwich, yet I don't know where it comes from and how to get it to taste so good.  I get the rest.  The meat is roasted much like a classic roast beef would be, with the addition of all kinds of Italian seasonings.  I can make giardiniera.  But is the juice made from the drippings of the roast, beef stock, boulillon cubes, or is it some kind of packaged gravy?

I'm not sure how the roast could be cooked in the juices without just turning into beef stew.  Likewise, it's such a cheap sandwich in so many respects, I can't imagine them using something fancy for the sauce and creating it separately.