How to make this Chicago classic. 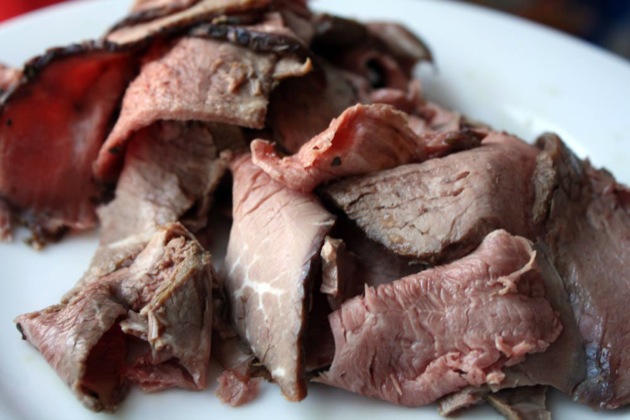 The other issue I had to face was how to cut the meat.  As I remembered from my visit to Al's #1, the beef should be shaved as thinly as possible.  Al's used an huge deli slicer, which I obviously didn't have.  Saveur recommended just tossing the meat in the freezer for 2 hours before serving and then slicing it as thinly as possible with a chef's knife.  Some recipes recommended taking the cooked meat to a deli and having them slice it for you.  But I figured I'd give the freezer method a try first.

I made the meat, then let it and the juice cool down on the counter for an hour before stashing them both in the fridge.  The next day I stuck the beef in the freezer for 2 hours before lunch.  I heated the juice back up on the stove and set about trying to cut the meat as thinly as humanly possible.  It was surprisingly easy.  The key is to slice slowly, and to always angle the knife away from the center of the meat.  Though not as thin as Al's, if you take your time it should be close.  If I cut any large chunks I'd set them aside and pull them apart with my fingers to get them roughly the size that I wanted.

I reheated the slices in the juice for only two minutes.  Then I stuffed it all in a bun, topped it with giardiniera (my homemade version failed, so I used a store bought brand). I was so worried that the meat would be tough and the liquid too watery that I nearly lost it when I took a bite.  The sandwich was absurdly tender and juicy, and while the liquid wasn't quite perfect, it still hit all the right notes.  It was awfully close. 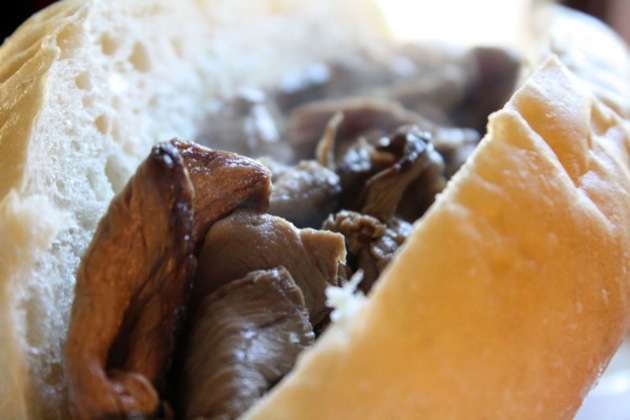 And it got better.  The next day I reduced the sauce a little more and added a little grated nutmeg. Michael Nagrant pointed out this addition in a post on Serious Eats about Al's #1 and he's completely right.  It really adds to the aroma.

This sandwich is dangerously good.  I've had four in the past 2 days.  I eventually just stashed the rest of the meat in the freezer so I wouldn't be tempted to eat Italian beefs for four consecutive days.  Which is a little bit of an issue.  I certainly got my money's worth.  The meat was insanely cheap, and so were the giardiniera, and buns.  The total cost was around 15 bucks, which has produced 5 sandwiches so far.  The only problem is that there is more meat than two people should eat.  This kind of project is best for parties.  Which, come to think about it, probably why the sandwich was invented in the first place.  Just be sure to have lots of napkins. 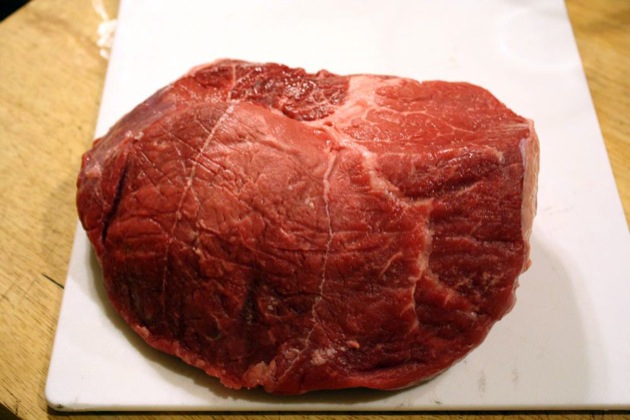 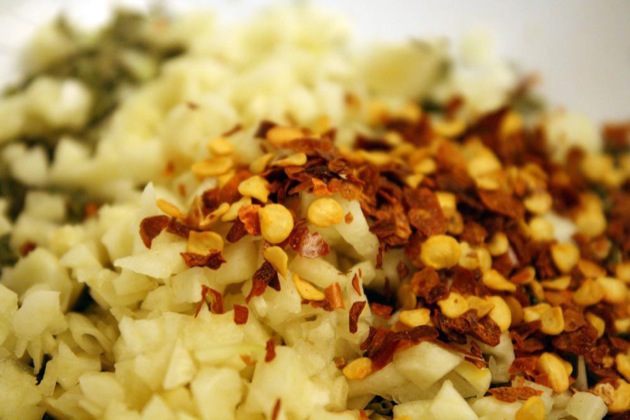 Preheat the oven to 450 degrees.  Mix together the red pepper flakes, basil, oregano, garlic, and a pinch of salt and pepper. 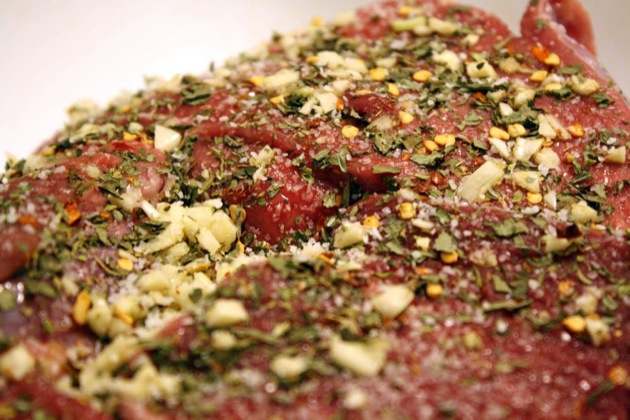 Rub half of this mixture on top of the meat.  Set the meat in a large roasting pan and set in the oven.  Roast for 20 minutes, then reduce the heat to 250 degrees.  Cook for another 20 minutes. 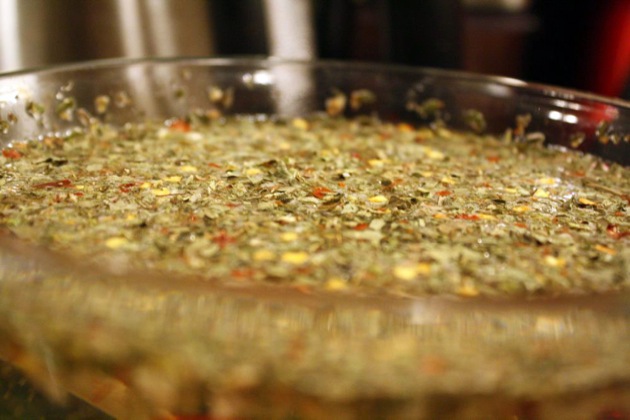 After the 20 minutes, add the rest of the spice mixture to the quart of water.  Pour this into the roasting pan.  Cook for another 30 to 45 minutes, or until the temperature of the middle of the roast is 130 degrees. 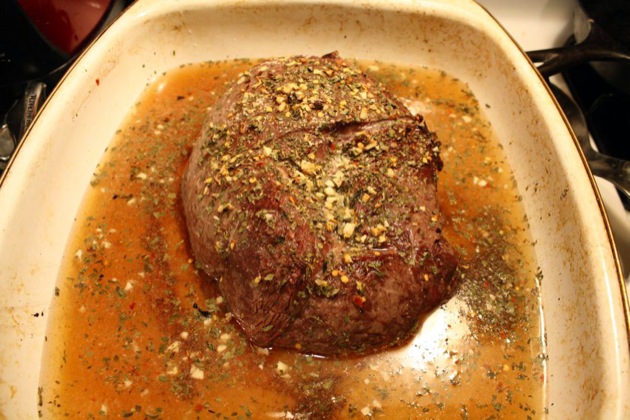 Remove the meat and set aside to cool.  Set the roasting pan on some burners and turn the heat to medium high.  Scrape up any bits that have stuck on the bottom.  Reduce mixture slightly for a few minutes.  Then turn off the heat and let the mixture cool.

Cover the meat and place the juice in a container and then stash them in the fridge and let them hang out overnight or a day.

Before you want to eat, transfer the meat to the freezer for 2 hours. 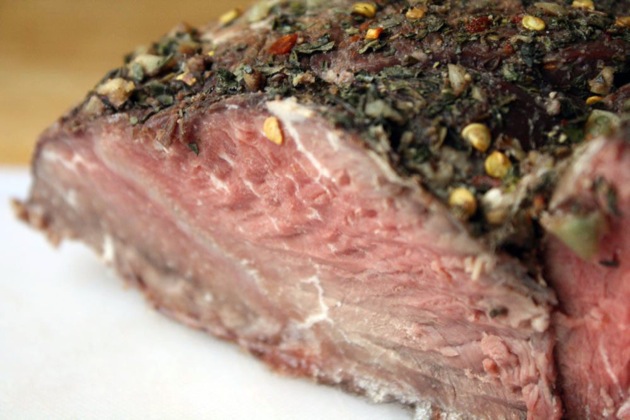 Slice the meat as thinly as possible. 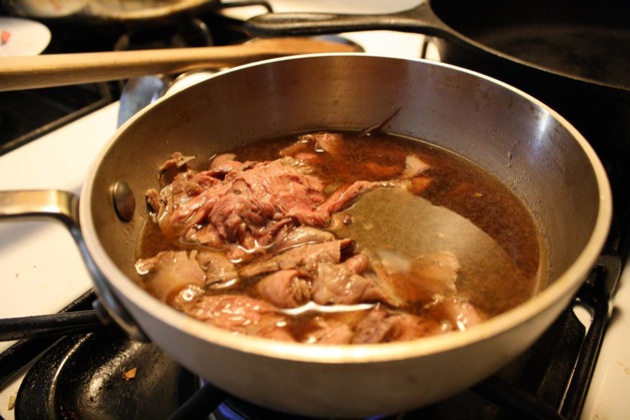 Warm the liquid in a pot.  Add the grated nutmeg.  Reduce the mixture if it is too watery.  Then dump a handful of the sliced meat into the juice and cook for 2 minutes. 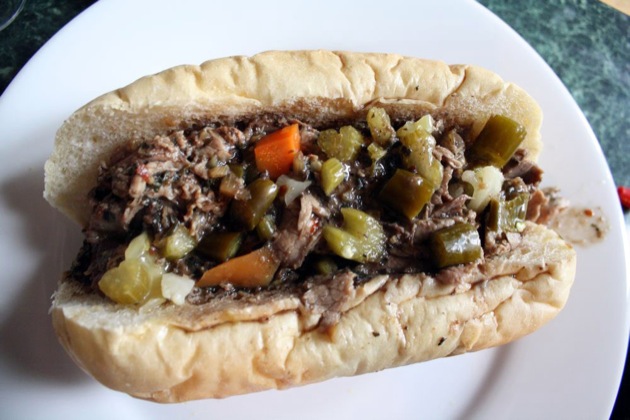 With a pair of tongs, transfer the meat straight from the pot to the Italian rolls.  Top with the giardiniera.  Dip the sandwich in the juice if you want to.  Or you can pour a little more of the sauce on top of the meat.