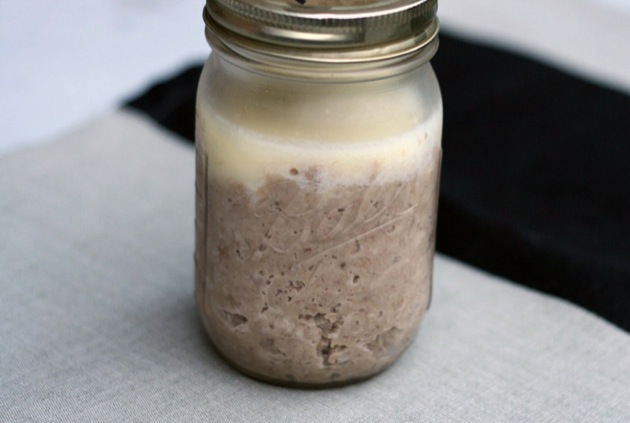 It was a last-minute whim, but there I was at the checkout, buying a whole duck. I've cut up dozens of roast chickens into legs, thighs, and breasts -- usually with the meat and skin steaming and burning my fingers -- so how much harder could it be to do the same with a duck?  Above all, it's much cheaper to buy a whole duck and cut it up yourself than it is to buy the parts separately -- and every duck has a generous amount of fat that can be rendered down for all sorts of culinary uses.  In the past, I've bought both legs and breasts separately to make duck confit and duck prosciutto , but it was time to eliminate the middle man, who was getting paid a generous markup to simply cut the animal into five or six pieces.

In a way, it shouldn't have been much harder than cutting up the quite-familiar roast chicken; all the parts are in the same places. And when I was through cutting, I did end up with the appropriate anatomical features. But I wouldn't call the result masterful by any stretch.

A duck is far more difficult to cut up than a chicken.  For one, the breast doesn't bulge out prominently, making it more difficult to slice away from the breastbone.  The body of a duck is longer, so the legs connect higher up on the body than they seem to.  It's heavier and larger than a chicken, so you can be less nimble with a knife.  And most importantly, a duck is insulated with absurd amounts of fat between the meat and the skin, which obscures all the joints and makes it quite easy to lose one's way.

In the end, I tried to look at a few guiding pictures in cookbooks but mostly just began to cut.  I used small incisions, checking my progress along the way. 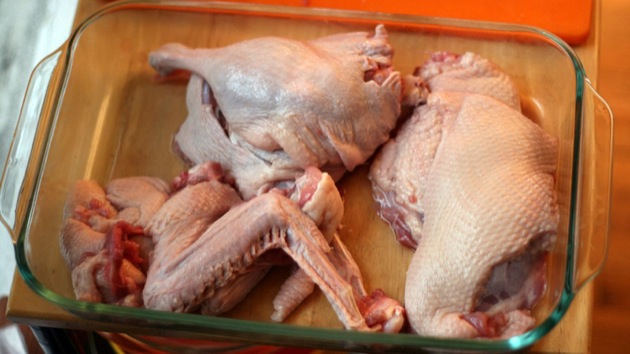 The two duck breasts are on the right, two legs at the top, a pair of wings, and the rest (not pictured).  The breasts went under salt for duck prosciutto, the back and wings frozen for making duck stock.  Which left the legs.

What to do with them?  Suddenly I had a craving for rillettes, the pate-like, potted mixture of finely shredded meat and fat, usually made from pork but possible to be made from most anything.  Spread on toast with a little tart cornichon french pickles and mustard, it's a tremendous pleasure.  But I'd never made them before.  Duck meat sounded as good as any animal for making rillettes, so I set out for a recipe.

What I discovered is that rillettes are always made from slow-cooked meat, but it is traditionally slow-cooked in water or stock; the fat is then added in later.  This works especially well with pork cuts like belly or fatty shoulder, in larger quantities.  Since I only had two duck legs and a tub of fat from the last time I made duck confit (the fat from confit can be re-used until it becomes too salty), I went for the shortcut route of making rillettes by simply shredding confited meat.

The instructions for duck confit have already been published here -- so refer to them for beginning the process.  It's an easier process than you might think, foolproof if you use low temperatures to avoid letting the duck go stringy (how badly can something turn out that's being poached in fat?), and the house smells wonderful for hours.  After the confit process, the process of making rillettes is equally easy, especially if you have a stand mixer to stir and shred the meat without mashing it to a paste.

The only key is seasoning.  I borrowed some elements from a few recipes, most heavily from Hugh Fearnley-Whittingstall's Meat book, which uses a kind of five-spice approach with nutmeg, cloves, cinnamon, and allspice.  It worked well against the subtly gamey taste of the duck. 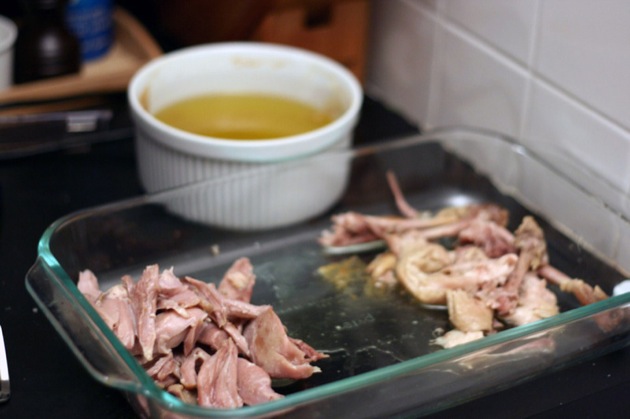 duck fat as needed, preferably from the confiting process
confit jelly (more on this later)

Prepare the duck confit and allow it to cool.

Remove the duck legs from the fat, taking care not to stir up the cooking vessel too much.  At the bottom there should be a dark substance that's collected, which should be jelly-like.

About the confit jelly . It's very important stuff. See, while the duck cooks gently in its fat, the bones and meat are giving out gelatin and flavor the same way they would if the substance was not fat, but water--which is what happens when stock is made.  Instead of this meaty flavor dispersing into the water freely and evaporating, as happens with stock, much of it collects at the bottom of the dish instead.  Once you (carefully) pour the fat away, what's left is ultra-concentrated duckiness .  If you're storing the confit this is usually discarded, because it can cause spoilage.  But as an ingredient in the rillettes, it boosts the flavor tremendously.  Just be cautious, because it tends to be very salty.

Once the legs are out of the fat, separate the meat from the skin and bones; it should slip away quite easily.  Put the meat into a mixing bowl, ideally for a stand-up mixer.  Using the paddle attachment, gently shred the meat, adding the confit jelly and then the seasonings very conservatively as you go.  While there will be some fat still clinging to the meat, more is surely needed.  Taste, aiming for a good mouthfeel, but don't let it get too rich or fatty.  Most likely the rillettes won't need any salt, since the confit jelly will add plenty.

To store, pack into clean jars, pressing down to remove air pockets, and cover with at least an inch of fat.  Stored this way, the rillettes can age for weeks or even months.

Serve the rillettes by letting them come to room temperature -- just as the fat begins to run -- on toasted or grilled white farm bread with a twist of black pepper, perhaps, definitely some mustard, and good cornichon pickles.