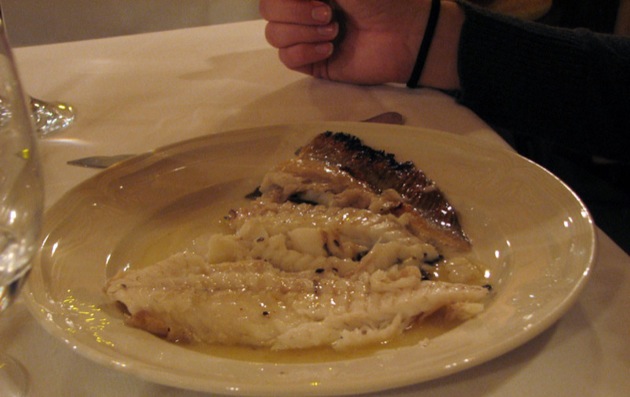 "No, no, no!" our waiter was saying, dashing across the room to our white-tableclothed table, where we were sitting in front of a grilled Turbot. I was politely transferring a portion of the fish's glistening meat to my plate with two forks.

"It's very important to us," he began to explain, almost out of breath, while taking my fork and knife, "to eat with our hands."  He picked up the fish's head and began to pull it gently apart with his large fingers, revealing a pocket of meat, the throat.  He opened it further in my direction,  gesturing for me to remove it with my fingers.  It felt religious.

"And here," he said, handing me a comb-like object, a fin and its protruding bones.   "Put this in your mouth, and suck out the gelatin."  His eyebrows went up, and he looked at my expectantly.

There was no ignoring this man's instructions.

We were sitting perhaps ten yards from the sea, in a tiny town called Getaria on the Spanish coast, where Elkano is the main attraction.  We would later learn from our waiter the difference between the flavor of the light skin (the side of this flatfish that faced the sun during its lifetime), and the dark (that faced the sea floor).  Or rather, we would learn to taste it, like no other fish skin, fatty and crackly, almost like a rotisserie chicken.

The restaurant is owned and run by a family , and our waiter, a tall, boyish man, is the son.  When we came into the restaurant, we met the father, who was host.  All the fish comes from the neighboring ocean. It may be one of the greatest places in the world to eat seafood.

We knew this before coming, which is why, 2 hours earlier, we were having a panic attack driving circles around a neighboring town, trying to find the correct road to reach the village.  Riding around a roundabout, reading the same signs over and over, which seemed to be conspiring against us, getting dizzy, circling skulkilly, more and more slowly, as if on a merry-go-round and waiting to pounce onto the right turn, should it reveal itself. When we finally made our decision and entered a tollway, we were informed (just after it was too late to turn off) that the next exit would be 30km away, far past our intended destination.

No matter: when we walked in, the restaurant was empty.  I mean actually, there was not a single person inside except the affable father.  Briefly, we wondered if it was the wrong day, or if we'd somehow confused 8pm with 8am, and there was something funny going on with the sunlight.  But no, we were right. 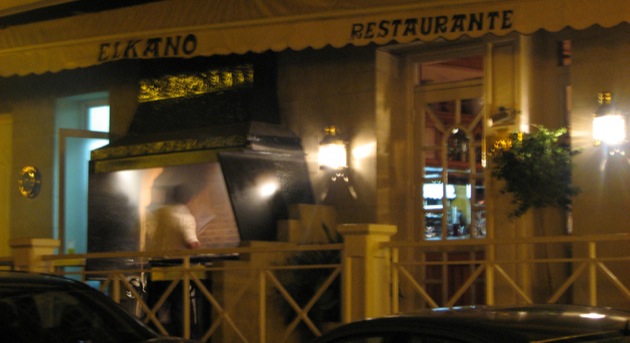 No one else showed up at the restaurant until after 9.  It turned out well: we had the undivided attention of the family.  We managed to communicate with a combination of English and Spanish, with a few misunderstandings here and there, and of course the one problem of the fish prices going by weight, of which we had little understanding. When we tried to order enough food for four, they graciously communicated this to us, and offered to bring out many half portions so that we could try everything.  In fact, it was, despite the language barrier, one of the best diner-waiter experiences I've ever had.  There was simply no pressure.  He sensed what we wanted, sensed our enthusiasm, and created a meal exactly how we hoped--even if we didn't know how to verbalize what that was.  We were able to relax.

To recommend what we should order for an appetizer, our waiter began grabbing the skin of his throat, wiggling it and exclaiming "Cheek! Cheek!"  We looked at each other, no idea what he was trying to say.  "From the fish, the cheek."  More throat grabbing.  "Throat?" we said, holding our own simultaneously.  "Ah, yes, throat!" he exclaimed.  We should try it fried, and we should try it grilled.  He would order one half appetizer for each preparation.  It would come from a hake fish. We also ordered a fish soup.  To drink, he recommended a Txakoli, a refreshing, lightly spritzy white that's inexpensive.

The fish soup was as brown and rich as French Onion soup.  They must roast fish bones and reduce the stock for days.  It was almost viscous. 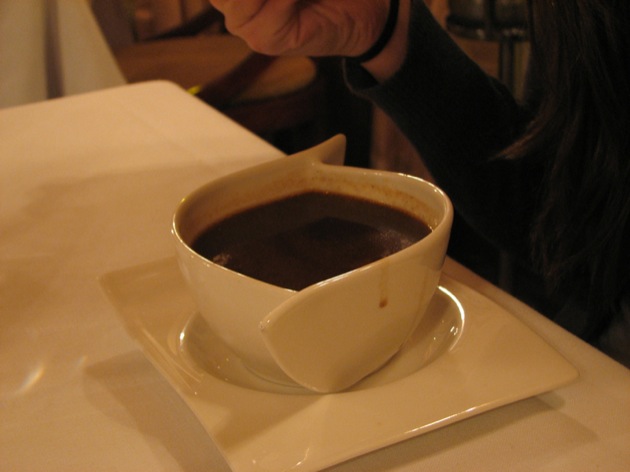 The first hake throats (cheeks?) came out with a subtle, light batter, fried.  They were wondrous and salty, the texture not at all flaky like most fish, but rich and dense. 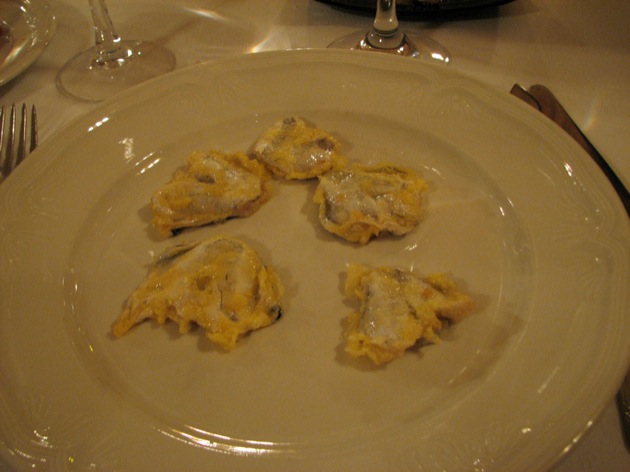 The second batch were grilled.  He came over and told us not to cut them, but to put them whole in our mouths and let them slide down our throats like an oyster.  They were delicate and barely touched, by flame or seasoning, served with a sauce made only from the hake itself. 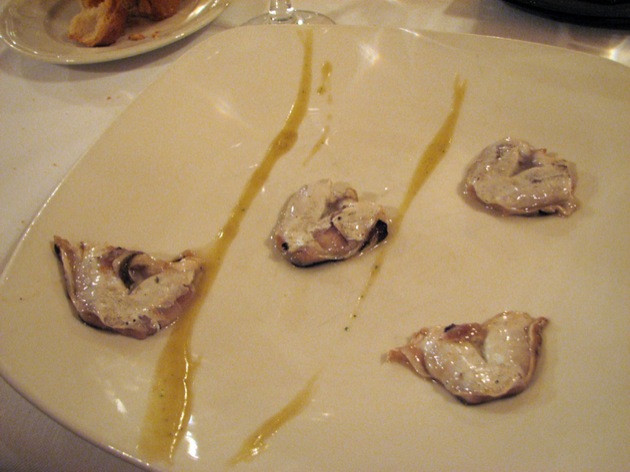 And then it was time for the Turbot.

It came out as a whole fish at first, presented to us for our inspection and admiration.  It was taken to a nearby station, where it was filleted, then returned to our table and served onto our plates. The rest of the fish was left on a serving dish in the center of the table. 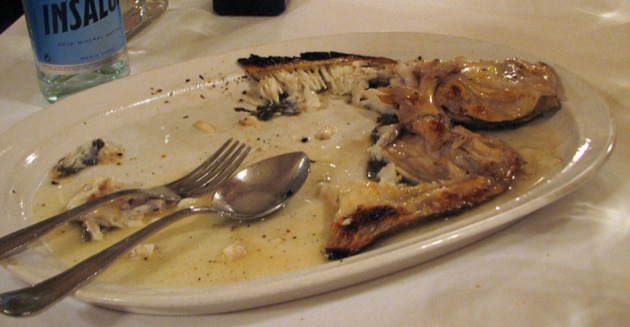 How to describe it?  It was simply itself: seasoned with salt and perhaps oil, but that's all; the juices and flavors were all intrinsic to the fish.  It was buttery, not flaky, dense, meaty, yet at the same time tender and nothing close to tough.  It was the difference between eating a boneless, skinless chicken breast and a perfectly roast chicken: one is a part of the animal, separated from the joints and tissues and skin, all those things that make it more succulent.  This was reverence for the entire fish.  I felt close to it, if that's possible--even affection.  I tasted its different light and dark skin with its meat, tasted the gills, picked the meat from between its bones and the head. I didn't want to stop eating it, and not just because it was delicious.  Finishing all the fish had to offer was a form of respect to the animal.

As we were leaving, the father was gathering our coats, speaking Spanish, asking us how our meal was.  The restaurant was now completely full and bustling.

"El mejor pescado en mi vida," I managed to construct out of high school Spanish and the haze of alcohol.  The best fish in my life.

One the way out, we watched a few more Turbot being grilled just outside the door. Though I knew that it was only humility that made him say what he said, there was some truth.  There was very little mystery: right there, on a grill, was the best fish I've ever eaten. 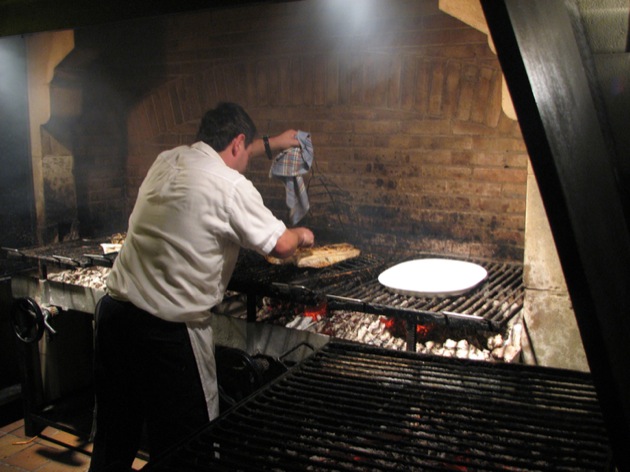