Can steamed duck legs tasted better than ones poached in duck fat? 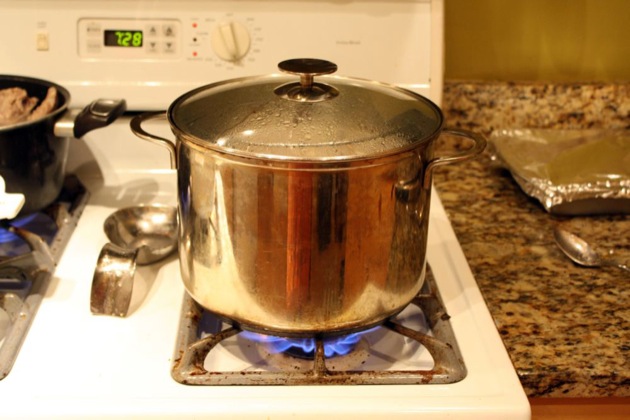 The question about whether a steamed duck leg tastes as good duck confit has been boggling my mind for months ever since I read this article in the New York Times . Finally, last night, after spending the previous three days hacking up two ducks, rendering loads of fat, and figuring out what to do with the heads ( Jonathan Gold actually sent me some interesting options on Twitter), I finally sat down to a blind taste test. 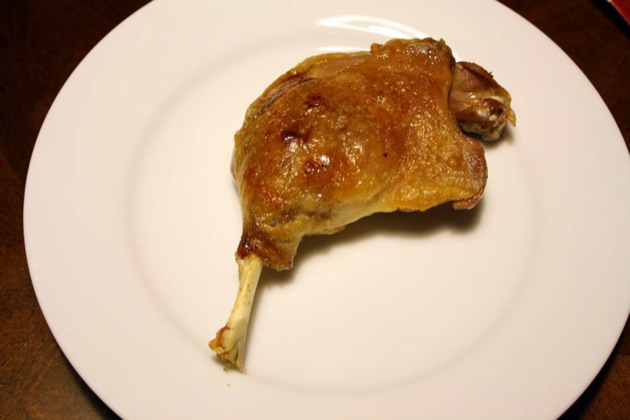 A small tasting panel made up of a good friend, my wife, and I tasted three diferent kinds of duck legs: one that was simply steamed, one that was cured in salt for a day and then steamed, and one traditional leg of duck confit. I'll spare the theatrics of the tasting and just say that the simply steamed one wasn't very good. It was kind of dry and didn't have the luscious texture I demand from confit. But our collective favorite, the one that we all agreed was the best, was the cured, steamed duck leg . 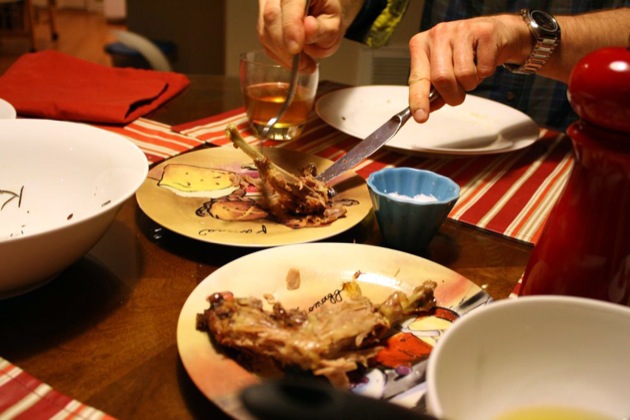 I lost it. I was sure we had mixed up the plates. I rushed back to the kitchen to inspect two extra legs that we held back (one of which was for Blake...sorry man). I knew which one was steamed and which one had been cooked in duck fat based on where I had placed them on the cutting board. I manhandled the meat, picking it straight off of the bones with my fingers. It confirmed what I already knew. Steamed duck legs taste really good.

Perhaps that's the lesson here, not that duck confit is worse. I had originally pitted this as the ultimate battle between confit and steam. But I did occasionally like bites of the duck confit better than the steamed. Sometimes I couldn't tell them apart. I still can't get over the fact that steamed duck legs taste good at all, let alone can stand up to confit.

I had some hints. Obviously, scientist Nathan Myhrvold claimed that fat could not penetrate the duck legs during the confit process in the above mentioned New York Times article. I wrote about this last week in an Idea Lab , and wondered whether people would take kindly to this trashing of a traditional technique or simply laugh me off of the internet. But something strange happened. While there were definitely some defiant people who immediately questioned the concept, there were some also promising findings.

Perhaps none were more so than a confirmation by Michael Ruhlman on Twitter .

This had me really excited.

Of course, the only thing the New York Times article didn't provide was a recipe. A quick scan around the internet didn't turn up anything, either. I plundered the cookbook section of the Harold Washington Library , eventually stumbling over this French cookbook titled The Art of Cooking with Steam by Jacques Manière (translated and interpreted by Stephanie Lyness). Amongst the text, they give a recipe for steamed duck legs which they claim will taste remarkably similar to duck confit. I found my guide.

My goal was to cook four duck legs, two using the age old duck confit method, and two by steaming. I began where all duck confit begins, with a salt cure. Half of what I love about confit is that salty flesh, so I decided to subject the steamed legs to this process to. Of course, it wasn't until after I did this that I realized that Manière didn't call for a salt cure for his duck legs. So I had to procure a fifth leg, which I simply tossed on the steamer basket on the day of cooking.

There are, how we shall say, some qualifications which you can read about at the bottom of the page (Notes #1 and #2). Otherwise, on to the experiment! 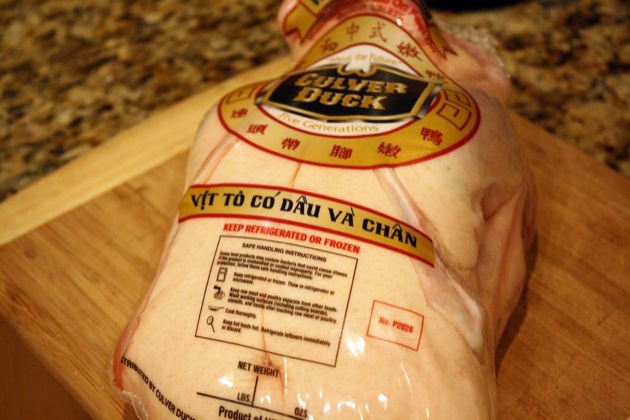 I bought two ducks. I hacked off the legs and the breasts from each and set those parts aside (I made a great meal with the duck breasts, but let's keep focused.) I removed the skin from the rest of the bird, roughly chopped it, and then placed it in a medium sized pot with a little water. I turned the heat to medium-low and rendered the fat. Then I drained it through a strainer. This was what I'd used to cook the confit. I placed skinless carcass in a large bowl in the fridge for use the next day. 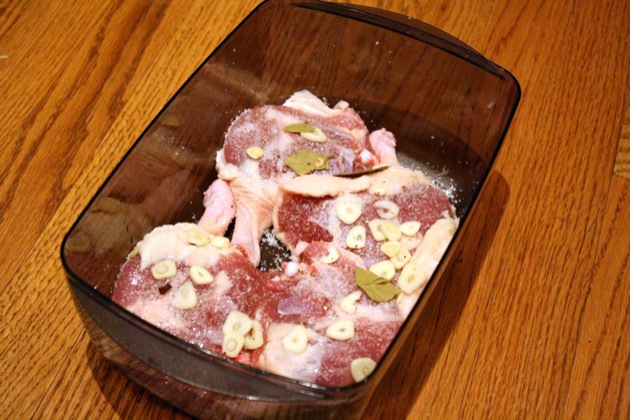 I used this simple one from Michael Ruhlman's Charcuterie .

Combine the salt, cloves, peppercorns, garlic, and bay leaves in a bowl. Rub the duck legs with the mixture, place them in a dish, cover with plastic wrap, and then stash in the fridge for 24 hours 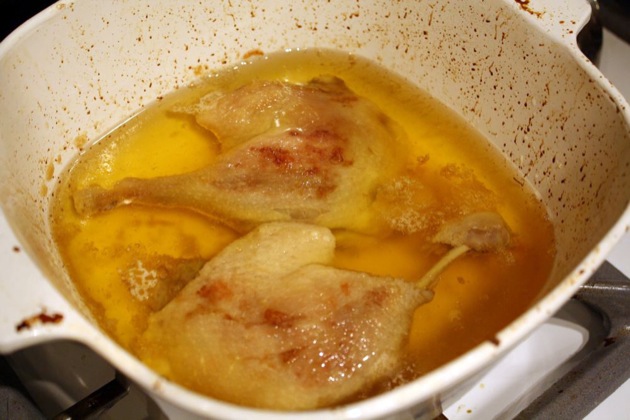 The next day, rinse the duck legs underneath cold water to wash off the salt and pat them dry. Preheat the oven to around 212 (just get as close as you can), and melt the duck fat in a small baking dish set over low heat. Slide two of the duck legs into the fat and place them in the oven. This cooks for 3 to 4 hours, or until the meat is very tender. Remove the dish from the oven, let it cool, and then stash it in the fridge. For a far more detailed explanation, check out Blake's post on the process .

For the steamed legs I needed to create a duck stock, which isn't nearly as hard as it sounds. The stock is just duck bones and water, and it cooks while the legs cook. It doesn't take any longer than steaming with water would. There is some disagreement in the Art of Steaming Book about whether one should use a flavored liquid at all, but I decided to follow the directions in the book as closely as I could (See Note #3 Below).

Chop up the carcass from one of the ducks with a cleaver and place it in a large pot that has a steamer basket. Pour in enough water to come 1/3 of the way up. Turn the heat to high and bring it to a simmer. Meanwhile, I skim off any foam that rises to the top.

There are only two issues that come up with steaming: Making sure there is enough water in the pot, and making sure that there isn't so much water that it touches the food. It's an eternal struggle. I had to pour some water out at the beginning because it started to bubble up to the food. I kept some hot water close, and checked the water level every 15 minutes. Luckily I didn't run out until the very end. 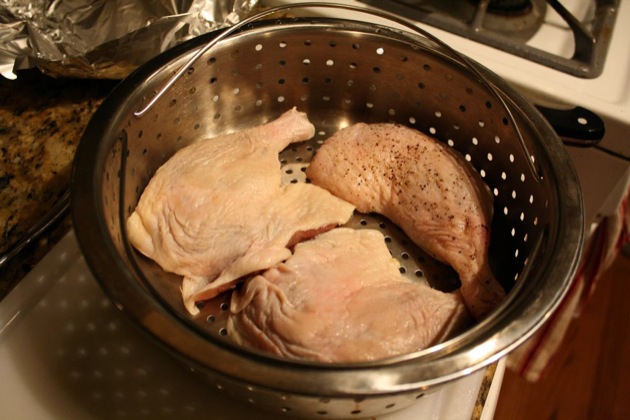 I placed three ducks (2 cured, 1 raw) straight into the steamer basket. I realized after about 10 minutes that they should be skin side down.

Steam them for 55 minutes. 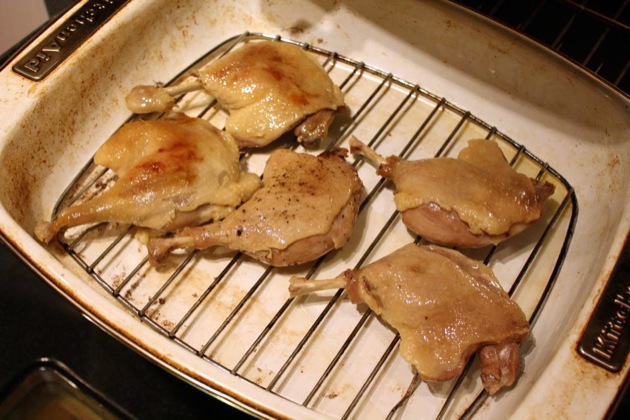 Brush the steamed duck legs with some melted duck fat. Make sure they are completely coated. Then broil all of the legs underneath the broiler. You could also saute them in a non-stick skillet, but I figured that would take too long for 5 legs. 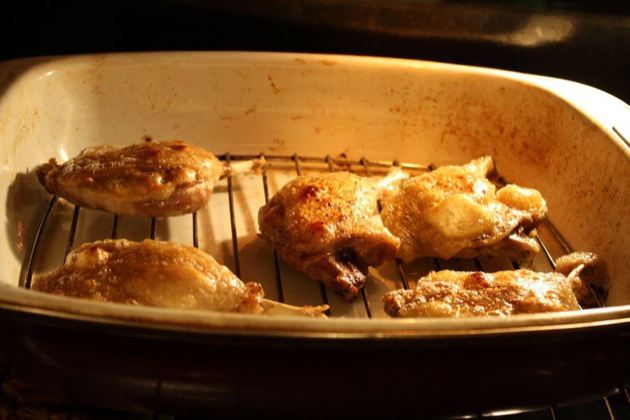 It takes about 8 minutes. Just make sure to keep moving them around, so they don't burn in spots. It worked pretty well. 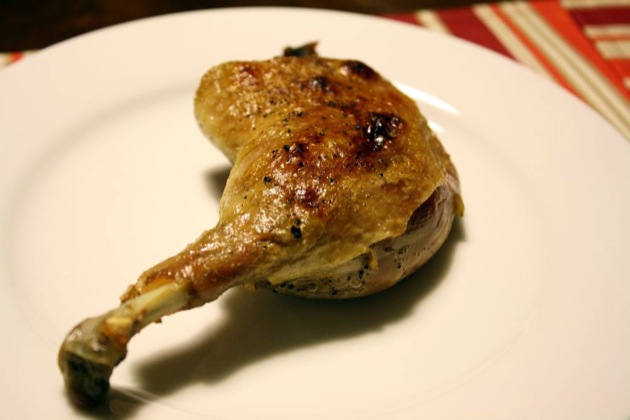 Obviously you know the overall result, but I'll quickly restate them here. The uncured and steamed duck leg didn't taste like confit. It was fine, if a little dry. It didn't seem to have as much flavor as the other legs. 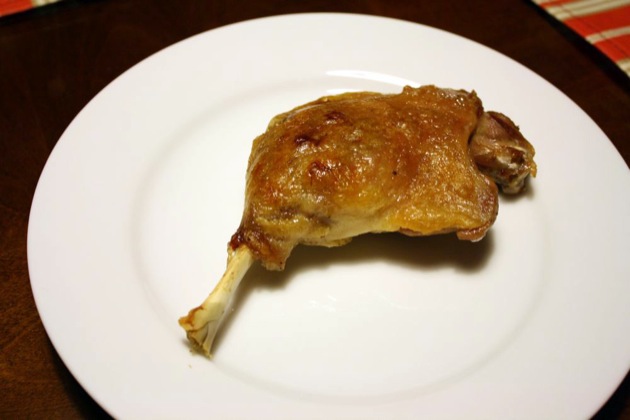 The cured and steamed duck leg was really tender and succulent. We thought this one had a gamier flavor to the meat, which we all liked. This was the winner. 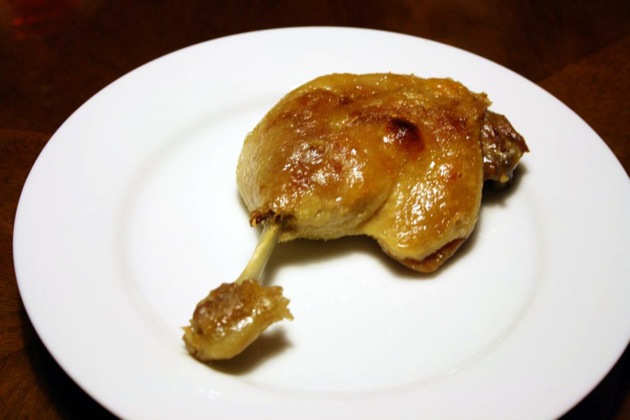 The confit leg was also tender, but its meat was a little more stringy. It had a deeper fat flavor, which was a little heavy. But it was, overall, really delicious.

Honestly, it was kind of hard to tell the last two legs apart at times.

1. I realized early on that my goal was not to make perfect duck confit. The gold standard, from what I've read, tends to be Thomas Keller's version where he cooks the legs for 10 hours over 190 degree heat. This is a much lower temperature than 212 degrees of steam. I worried intently about this, before finally deciding to check some other sources. I went to the largest library in Chicago to see what I could find. The results were all over the place.

Maintaining 190 in most ovens is nearly impossible. Most simply don't go that low. Cooking them over a burner for 10 hours didn't interest me in the slightest. In the end, I decided to try to cook all the legs as close to 212 as possible. This temperature is the middle of the findings, and it would also allow me to more directly compare the steamed and confitted versions.

2. The second qualification is about storage. Duck confit arose as a method of preserving duck legs in fat for long periods of time before refrigeration. If completely submerged in fat, they would last for a while. This method of preservation has only stuck around because it tastes so good. Also, many people claim that the duck legs taste their best after being stored in the fat for a month.

I just decided to skip this and focus on the texture of the meat. This was the biggest flaw in the experiment.

3. Over and over again Jacques Manière wrote that the steaming liquid doesn't need to be flavored. He preferred to put any flavorings directly on the meat or vegetables. Many of his recipes call for placing meat directly on a bed of herbs. So it kind of boggles my mind that this recipe would call for using duck stock to steam it. I don't have any idea if regular water would produce the same results, but I did end up with some really tasty duck stock.