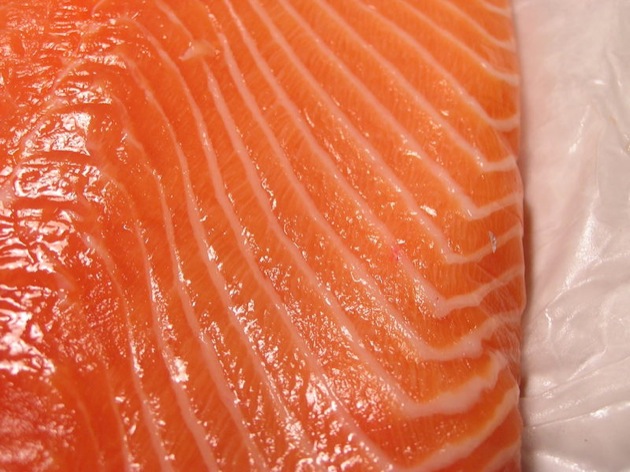 Sparked with inspiration by Blake’s duck proscuitto , I procured Michael Ruhlman’s Charcuterie and dug in.  Don’t let anyone fool you; it’s intimidating stuff.  Curing food is the exact opposite of the cooking I’ve become used to.  I love to take fresh ingredients and then cook them quickly, without much fuss.  This process, hopefully, highlights the good quality of ingredients I’ve been able to find.  Meanwhile, most of the recipes in this book take a perfectly fresh piece of meat, salt it, and then let it sit around for anywhere from a week to a year.  That’s a big change.  There’s nothing like cashing out for some expensive cut and then not eating it for the foreseeable future.

And so much can go wrong.  I know Blake’s experiment went to plan, but I’m a fairly neurotic person who needs to know what’s going on at all times.  Having never really cured anything before, I had no idea what would happen to meat that was left out of the refrigerator.  All kinds of bacteria could decimate the meat and the flavor could be all off.  And then what?  You can’t really adjust the seasonings to something that has been developing flavor for half a year.  It’s just a waste.  And where would I put such a project?  When you live in an apartment everything seems temporary.  God knows if I’ll spend the next year in the same place, so how could I possibly care for a piece of meat that needs to hang for that long?

I needed an entry.  So I pored through the book to find the absolute easiest curing recipe to get the ball rolling.  You have to start somewhere, right?  And I found it.  Fennel-Cured Salmon.  It only needs a mere two days before turning into a delicious variant of that bagel-donning delicacy, smoked salmon, except, you know, without all the smoke.   I love how it's sliced so thinly, yet packs so much flavor.

Before I could think twice, I was at the fishmonger ordering a nice side of salmon to be cured.  I also had to buy Pernod, an absinthe substitute that makes a mean cocktail called the Sazerac . Luckily, you’ll have some leftovers.  I’m getting sidetracked.

The process is fairly straightforward, and not at all scary.  Best of all, everything takes place in the fridge, a mighty fine place to start for a doubting-Thomas like me.

I also picked this recipe because of the fantastic dishes it could turn into.  A side of fresh salmon wouldn’t last very long at a dinner party, but cured, I’m hoping to squeeze as many meals out of it that I can.  And, according to Ruhlman, it’ll last in the fridge for something like 3 weeks, meaning I’ll have all kinds of time to experiment.

Adapted from Charcuterie by Michael Ruhlman . 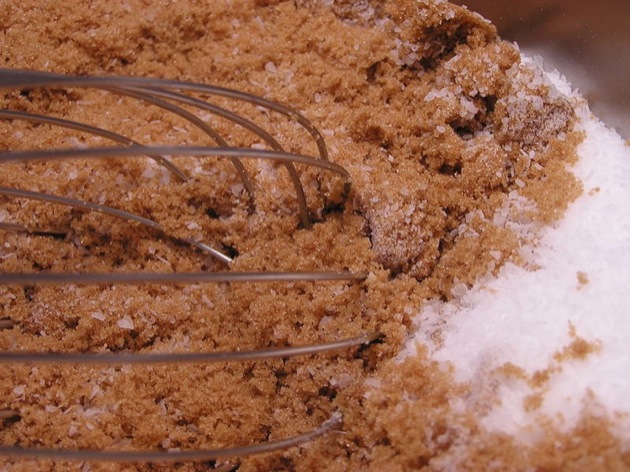 Whisk together the sugar, brown sugar, and salt.

The salmon needs to be covered by the brine, so if you have a non-reactive dish that is just a tad bigger than the fish, then use that.  If not, just use aluminum foil like I did.  Ruhlman says you want the brine to cover as much of the fish as you can, so don’t use some massive roasting pan. 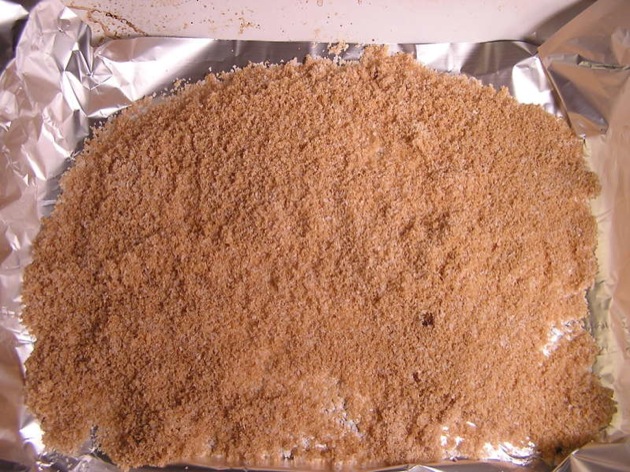 Sprinkle half of the sugar into the pan or aluminum foil. 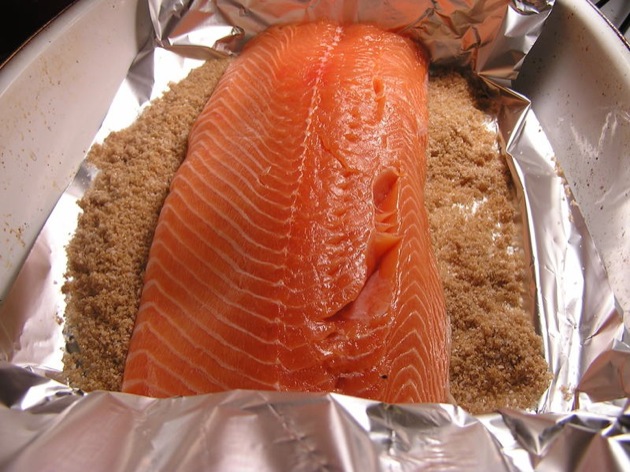 Set the fish atop and then carefully pour the Pernod on the flesh. 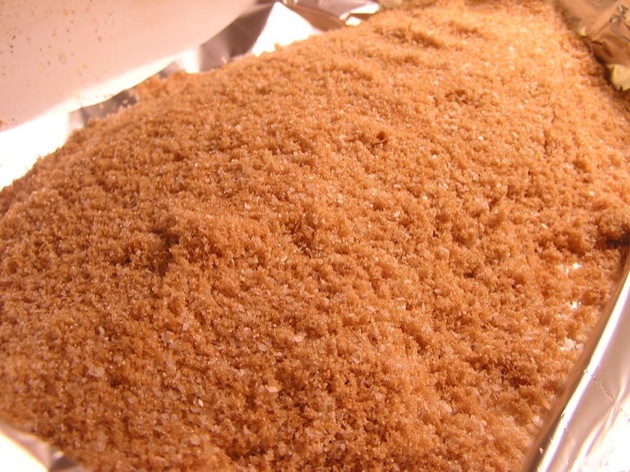 Sprinkle the other half of the sugar and salt mixture on the fish. 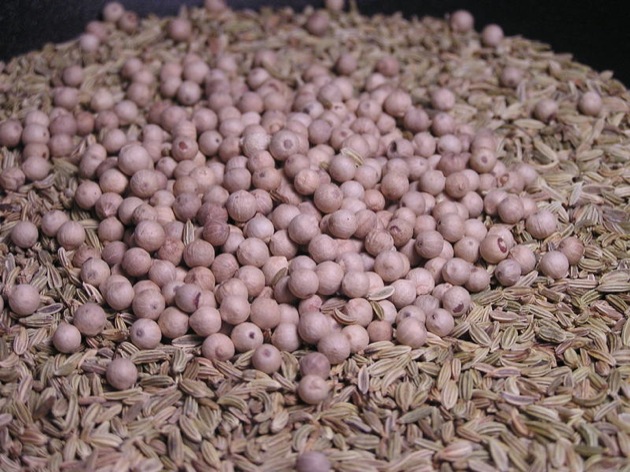 Toast the fennel seeds and white peppercorns in a medium hot skillet until fragrant. 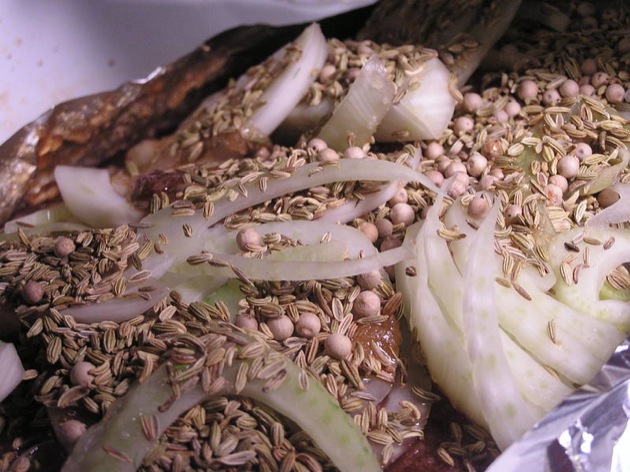 Take the thinly sliced fennel and layer atop the fish.  Dump on the fennel seeds and white peppercorns. 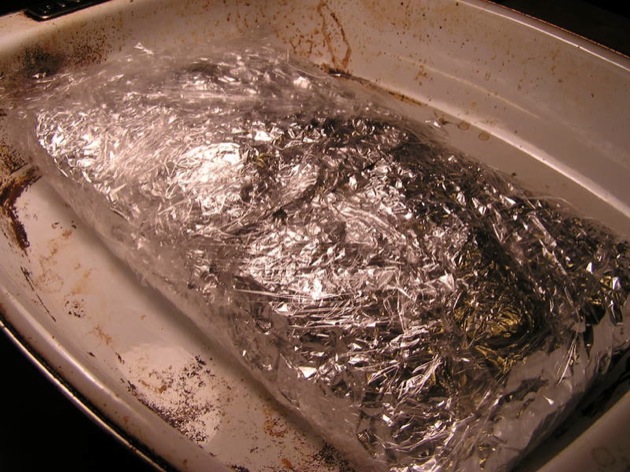 Enclose the fish in the aluminum foil.  Wrap in a protective layer of plastic wrap and then set in dish large enough to fold everything. 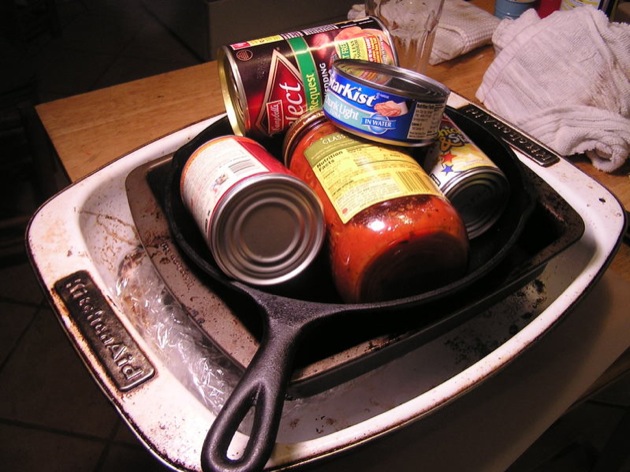 Place a pan on top of the wrapped fish, and then set 8 pounds on the pan.  Cans work well. 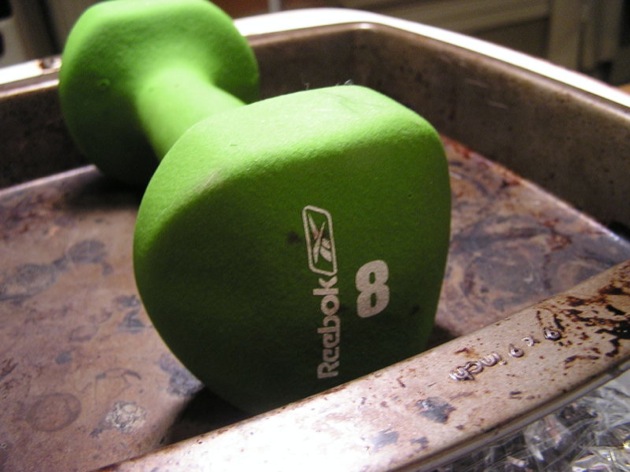 But a perfectly measured 8 pound weight is probably best.

Store in the fridge for 2 days.  I’ll let you know what happens!