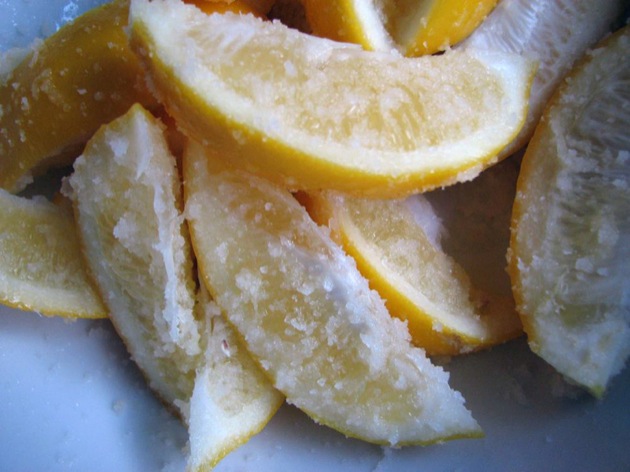 One of nature’s gifts in winter is citrus.  While the tomatoes are mealy, the lettuces limp, and all of us hardly in the place to get excited about more root vegetables, our brightly colored friends fly in from warmer climes to shine a little light.  Citrus fruits become larger, juicier, and more fragrant during the winter months when their true season begins.

Among citrus fruits, Meyer lemons are prized for their complex flavor and gentle acidity.  "Discovered" for an American audience in the early 20th century in China by a guy named Meyer, they are thought to be a cross between a lemon and orange of some kind, and have the bright forwardness of a lemon with less of an edge and more of a sweetness.

We’re nearing the end of Meyer lemon season, and so I set out with two recipes I’ve never tried: preserving in salt and making marmalade.  The former is a staple of Moroccan cuisine, which I don’t necessarily cook much of, but I’ve also heard that they’re great in cocktails and on top of pizzas .  Marmalade makes good use of the peel of whatever fruits it’s made with, and Meyer lemon peels are its most prized part, thin and sweet, far less pithy than your average lemon, and therefore less bitter.

Unlike my sorry failure at making jam last time, there were no ingredients in this marmalade but lemons, water, and sugar--which I liked.  No messing about with pectin and calcium packets, just natural thickeners present in the lemons themselves (in the rinds, I guess--anyone know more about this?).  Which not only makes the recipe simpler, but also makes it seem close to the earth and more authentic somehow.

Besides a little time to wait around, both of these recipes were ridiculously easy, and should keep me in fragrant citrus for the whole year.  And just before I began writing this post, I unsealed one of my marmalade jars and spread some on buttered toast.  It was perhaps the best marmalade I’ve ever tasted, without a doubt.  Sweet, tart, barely a trace of bitterness.  This recipe works.

When choosing lemons, go for the ones with more orange colored skins, rather than a pale yellow, because it means they were ripened on the tree.  They should smell fragrant.

And the best part: to make both of these recipes, you simply need a few mason jars, sugar, salt, olive oil, and the lemons themselves.  Nothing could be simpler.  You'll thank yourself all year long.

From Gourmet.com , Adapted from Paula Wolfert

(Note: I made one third of the recipe, to make one 2-cup mason jar, but the original recipe proportions are present here).

First, take 6 lemons (in my case, 2) and lower them into boiling water to cook for 5 minutes.  This makes a quick preservation method even quicker. 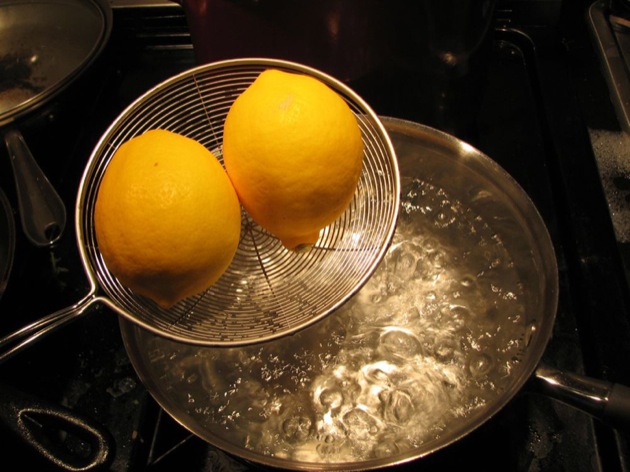 When they are cool enough to handle, slice them in half, then into quarters, then eighths.  As you cut them remove the seeds--Meyer lemons seem to have many seeds, as well as a lot of internal white membrane.

In a bowl, toss the lemon wedges very well in the kosher salt. Then, pack them into your jar(s) well.  Squeeze the juice of the remaining lemons (through a strainer) and add it to the jar(s) so that the lemons are covered, or close to it.  The salted lemons will give off some juice as they cure in the salt, so close is okay. A citrus reamer is an indispensable tool for getting the maximum juice, more than any other tool, I've found. 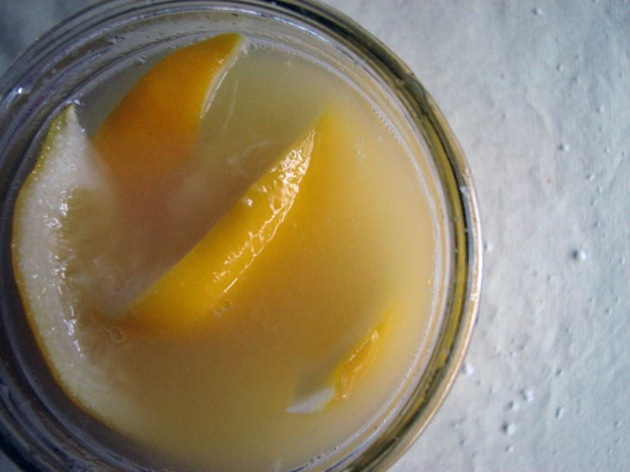 Close the jar and let stand at room temperature, upending and shaking gently once a day, for five days.

Mine are still curing.  Once the five days are up, you add the oil and chill.  They keep in the fridge for up to 1 year. 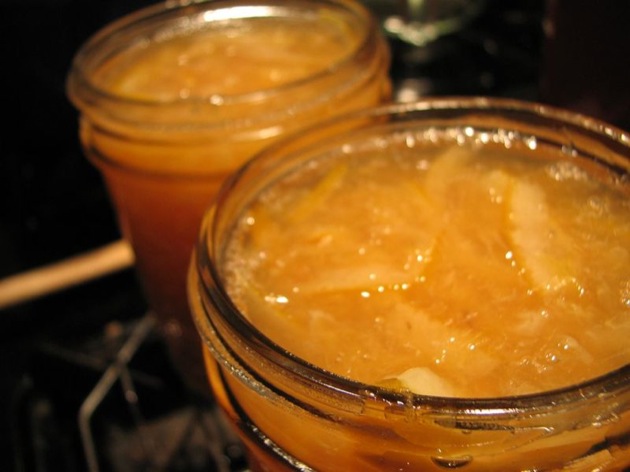 (I made 2/3 of the recipe, to make two 2-cup mason jars, but the original recipe proportions are given here.)

Cut each lemon in quarters, remove as many seeds as possible, and reserve the seeds.  I slices off some of the white membrane toward the center of each slice, as it was quite thick. 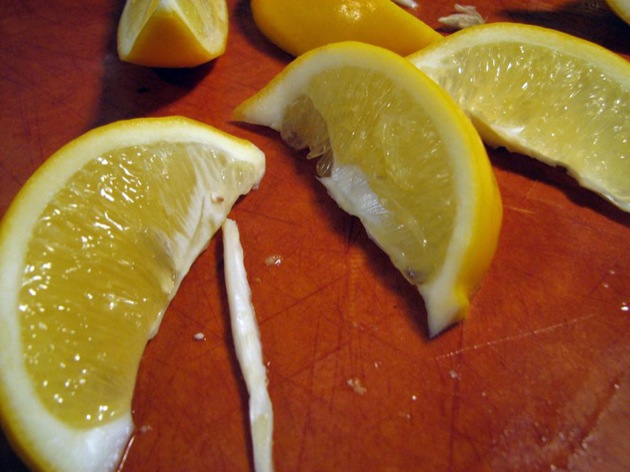 Slice the quartered lemons very thinly, removing and reserving any further seeds that appear, and add to a large nonreactive pot, like a dutch oven.  Add any juice from the cutting board.  This will all take quite
a while.

Tie the seeds up in a cheesecloth bag and add, with the water, to the pot.  I had no proper idea about how to make a cheesecloth bag, so i just tied it up in a bundle with kitchen string and called it a night. 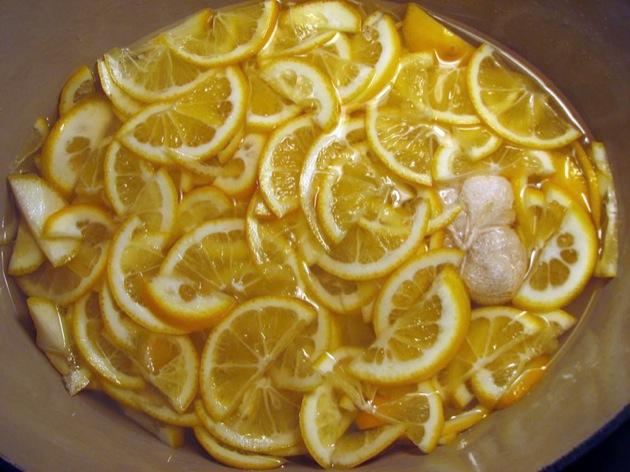 Cover the pot and let stand for 24 hours at room temperature.  I should have said this earlier, but throughout, keep a clean cutting board and make sure to wash the pot well with hot sudsy water, just to keep out any unwanted friends while the lemons sit for a day.

After 24 hours, put the pot on the stove and bring the mixture to a boil over moderate heat. Once it boils, reduce the heat to a simmer and let the mixture reduce down for 45 minutes to an hour.  The recipe advises that it should reduce down to 4 cups.  But I noticed that it was already a bit syrupy just from the 24-hour waiting time.  By the way, the recipe doesn't specify when to remove the seeds, so I just took them out at some point during the reducing process. 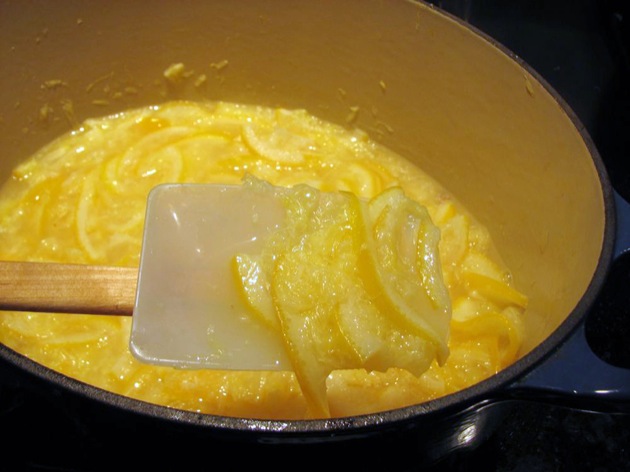 Meanwhile, fill a large stock pot with water and bring that to a boil as well.  Wash the mason jars in hot, hot, soapy water, then rinse well.  Add jars to the boiling water on top of a rack (I used one of those petaled unfolding vegetable steamers) and boil for 15 minutes or so.  Then, turn off the heat and add the lids and let stand for ten minutes, or until the marmalade is ready. 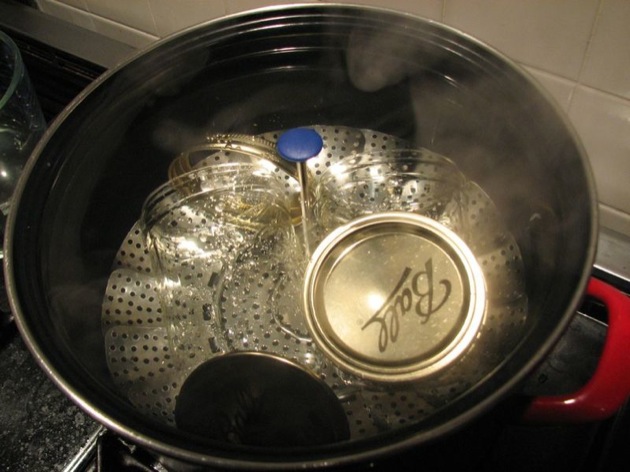 Once the lemon-water mixture has done its reducing, the sugar goes in with constant stirring, and everything cooks for another 15-20 minutes, or until “a teaspoon of mixture dropped onto a cold plate
gels.”  I tried getting a teaspoon to gel with no success for awhile, and eventually just decided it was time. 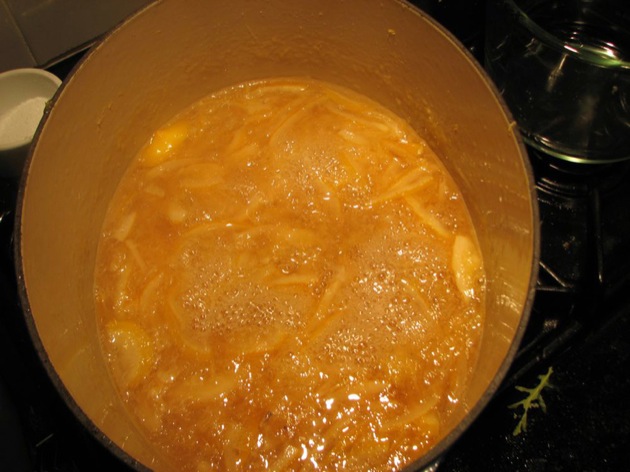 Using tongs, remove the jars from the hot water and place on the counter.  Do not dry them, just go straight to ladling the marmalade. This is harder than it sounds, getting it all into the jars without spilling. Fill it to within 1/4 inch of the top. 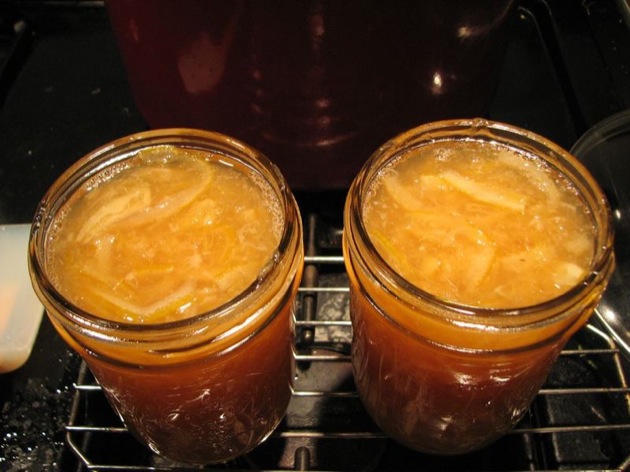 When you’re done, wipe the rims with a paper towel dipped into that boiled water, put the round sealing part on top of the jar, then screw on the caps.

Using tongs (because the jars will be mighty hot), transfer the jars back into the hot water bath, crank up the heat, and make sure they’re covered by at least an inch.  Boil vigorously (covered, if possible) for at least 5 minutes, then find some way to transfer the jars out of the searing hot water onto a cooling rack (I burned my hand trying to pick up the jars with slippery tongs, and eventually worked up a system using a giant Pyrex measuring cup dipped into the water, then held against the side of the pot to drain off the water that I’d scooped up along with the jar).

Allow to cool completely.  Make sure the tops of the jars don’t pop up and down, which would indicate that the seal didn't work. Marmalade should keep for up to a year. 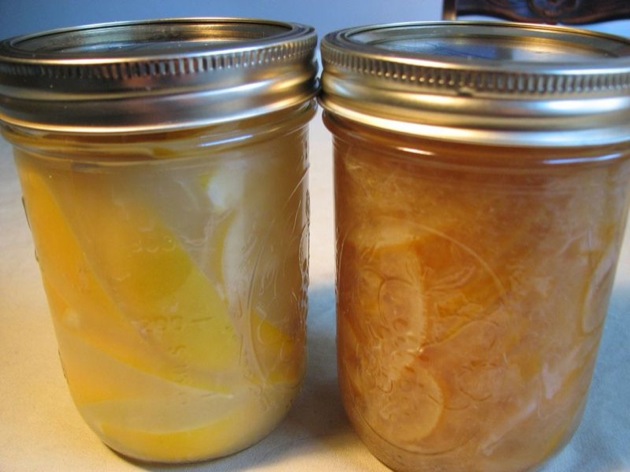 And that's how you preserve Meyer lemons, two ways.