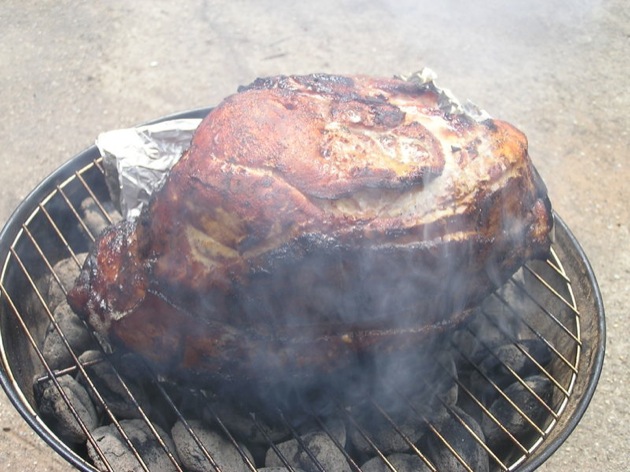 (Hey Everyone!  Check out an updated version of pulled pork and a recent trip down to North Carolina in search of the real thing.)

My bike careens to the left until I start to feel the rush of a truck.  I cut back right, trying to make up for my error--I guess this is a line I’m crossing--but for some reason I can’t ride straight.

I blame the night before.  Sure, the asphalt of Van Brunt St. does not exactly run level, and I am balancing a 7 pound hunk of meat on my left handle bar, but mostly I can’t see straight.  It is an early Sunday for my brain and for me--the two are definitely not one yet--and I need to get started right now .  In fact, I’m already late, already behind schedule for a dinner that won’t start for another 9 hours.  What kind of a man am I exactly?  Here are some options for consideration:

1. A ridiculously neurotic dinner party host who wants to finish all slicing and dicing 8 hours before anyone arrives, just so I clean
2. A yuppie cyclist out early to procure my beef tenderloin which I’ll ruin with a couple shallots and $70 Burgundy wine reduction just because I can
OR:
3. A slightly hung-over, tired, and coffee-less amateur griller, who needs to begin the longest cooking experience of his life

It is 9...in the morning.  No, I’m not still drunk, though I was before.  I ride my gnarly $35 bike to Fairway exactly 10 minutes after I wake, because this certain recipe takes that long to make.  We are going to make barbecue, and we're going to do it correctly.

We go for straight North Carolina BBQ , pork shoulder cooked indirectly, forever, on grill with charcoal and wood chips so there'd be enough smoke to infiltrate every ounce of the meat.  Once done we'd smother it in real vinegary BBQ sauce with plenty of kick.  Why, exactly, would we do this?

There's this blog called Grocery Guy , which we love because it's informative, hilarious, and full of vulgarity and swear words.  One day Blake read a post about smoking a hunk of pork with a Weber grill, a pile of coals, and some wood chips.  It all seemed too easy.

Ever since this grilling journey began we wanted to test the limits of our skill, to try new techniques and to push ourselves to the utmost pursuit of culinary ecstasy.  And nothing quite suits a grill more than slowly-smoked pulled pork.  Now, we are not here to argue about the "correct" variation of barbecue, or if our version can even be considered North Carolinian.  That's a question posed by people with thousand dollar smokers, not us.

We did have a full day, a few beers, and absolutely gorgeous, if hot, weather.

The one thing they don't tell you about pork shoulder is that it's as cheap as sin.  I was all expecting to plop down $30 to $40 for a nice piece of meat.  So imagine my delight when I held up a 7 pound piece of pork shoulder for $9, making this one of the cheapest items per pound that I'd ever bought. The reason the meat is so cheap is that it's as tough a cut of meat that comes around, and the only way to do it right was to cook it for ages.  Which is exactly what I would do. 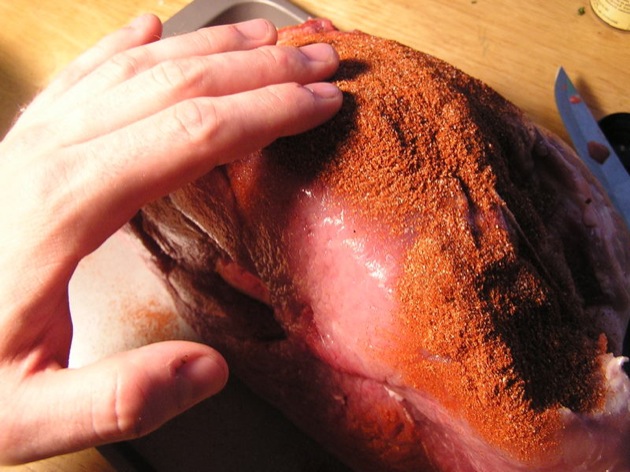 Mix all the spices together for the rub.  Take out the huge hunk of meat and cover it thoroughly with the rub and let it sit.  How long is another question to which we shall plead incompetent. I read loads about how long to let the meat sit with the rub.  And the answers ran from 5 minutes to many days.  We copped out.  It was early in the morning and I wanted to get things started.  So we let it sit for around 30 minutes while I got the grill ready and then started the process.  Once again, we need to reiterate how completely inept we were/still are. 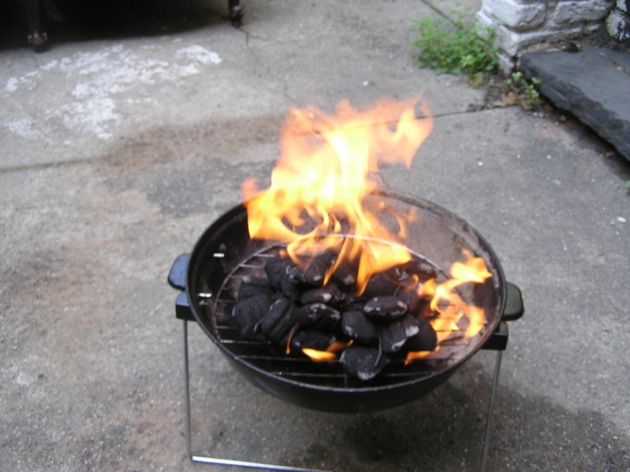 One thing to make sure of is to have enough coals.  This process takes around 8 hours, and the coals will definitely start to lose heat after about an hour and a half.  We replaced the coals around 4 times.  And because I wussed out and used self-starting, I had to remove the meat every time I replaced the coals so the meat would not get coated with a very unattractive layer of soot.  Anyway, nothing less than a bag of charcoal will do.  Just keep reminding yourself that you only paid 9 dollars for the meat. 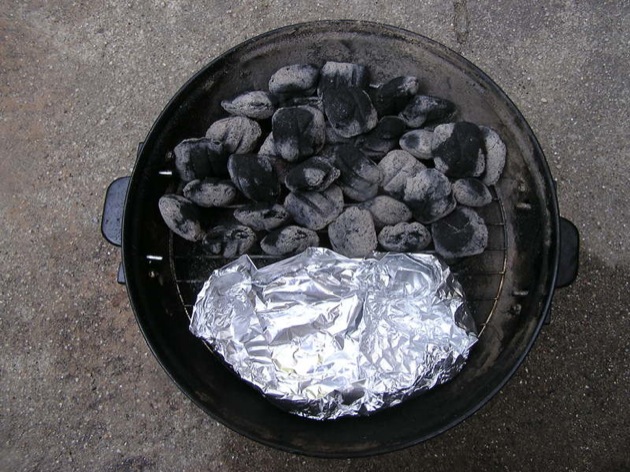 Once the coals are nice and hot, I moved them to one side and set a little makeshift boat of aluminum foil.  This was to deflect some of the heat, because we were apparently looking for indirect heat.  So we thought that's be a nice and proper place to toss in the wood chips.  Not that we had any idea. 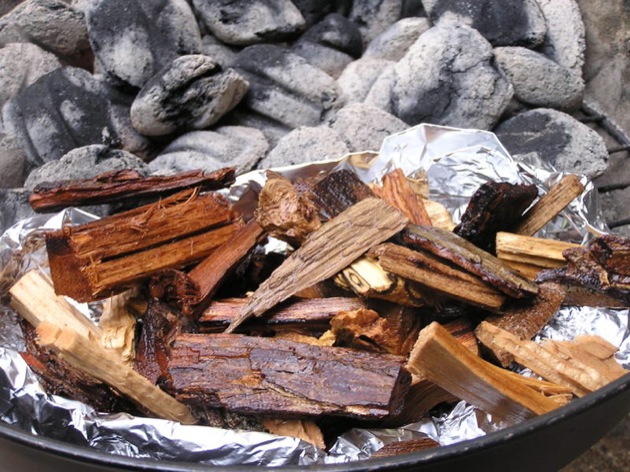 I soaked the wood chips in water for about 30 minute before I laid them on here.  According to Grocery Guy, you're supposed to put a bin of water on the side without the coals, to keep the meat from drying out.  But this is the smallest grill that Weber probably ever manufactured.  There was no room.  So we sort of winged it. 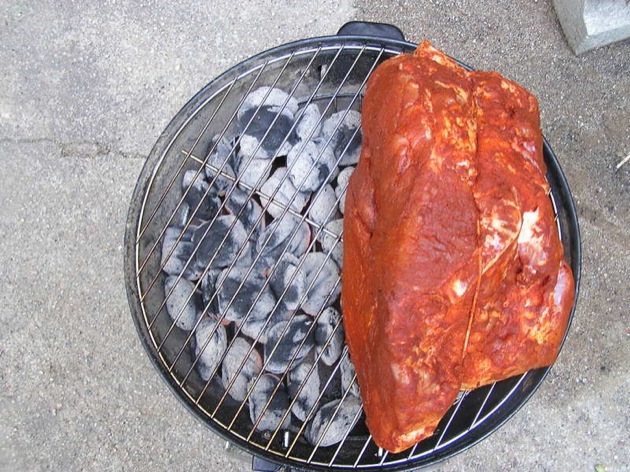 My whole operation was coming together.  The coals were hot, the chips were in, and we set the meat on the grill.  The whole thing about tipped over.  The 7 pound hunk of meat took up nearly all of the grill and when it was placed extremely to one side, wouldn't allow the cover to rest in place.  So we had to take the meat off, ring the coals around the outside, resting the aluminum boat in the middle.  This lasted until I noticed the wood chips had caught on fire, which was bad. 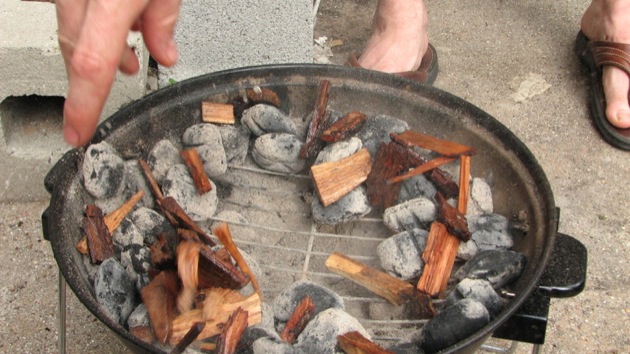 So we had to scatter them amongst the coals, which I should have done from the beginning.  Then, and only then, did the wonderful smoke start to pour out the side.

We changed the coals every hour and a half, and after two cycles the meat started to look like this. 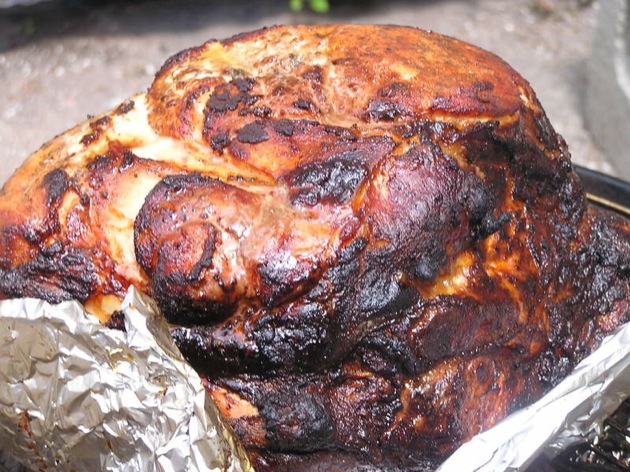 By now I was just content.  I had some beer, some flip-flops and was squinting from the sun and smoke.  Now it was a matter of waiting. 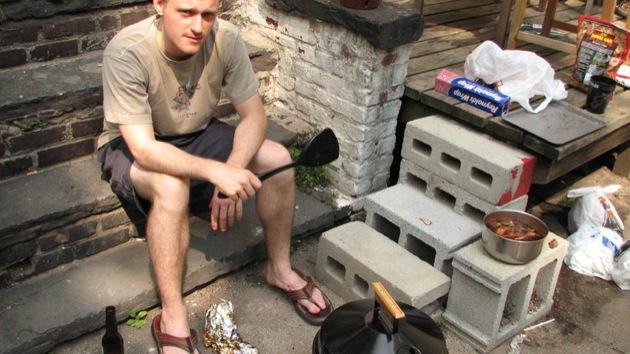 With about an hour left in the cooking we whipped up the sauce.  Just whisk together white vinegar, cider vinegar, sugar, cayenne pepper, Tabasco sauce, and salt and it's ready to go.  If you have a brush--most people do--then just begin to bask the meat.  Of course we didn't, so I took a spoon and ladled a little here and there around the meat.  Don't go overboard or it will all just fall into the flame and that equals waste. 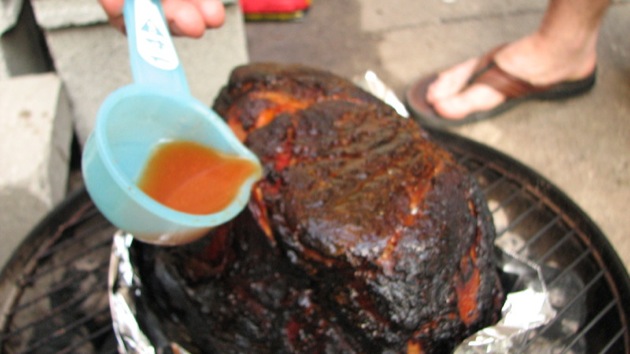 At the 8 hour mark, we removed the meat and let it sit for a good 30 minutes.  At that time we took stock and realized that, having gone through the entire bag of coals because they needed changing every couple hours, they had cost more than the meat itself.  Then the fun began. 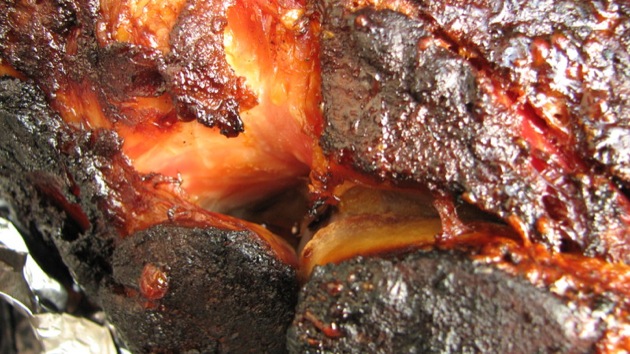 The outer skin was tough and hard, the inside juices sealed in by a charred outside.  It should look like this, which may seem incredibly overdone, but believe us, inside it's a different story. 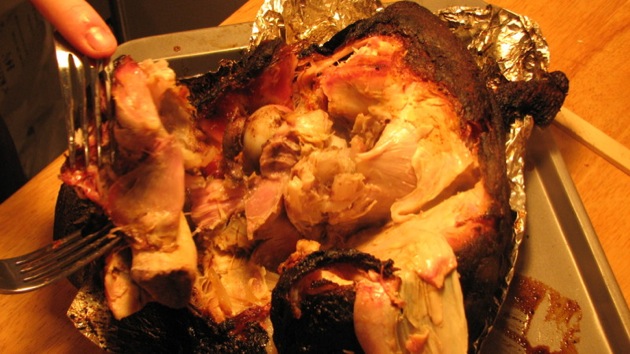 Using two forks, pull the meat into it falls into small shreds.  It will do this very easily.  Place in a large bowl and pour some of the sauce in.  You can choose not to if you like to control how much sauce the meat has.

We also sliced some sweet potatoes, tossed them with oil and salt and pepper and a few shakes of paprika, and baked them for twenty minutes at 400 degrees, until browned.  For our green beans we used a simple white vinegar and dill recipe, with a spoonful of sugar to cut the bitterness--often you'll see this recipe with bacon, but we figured we had enough pork to eat as it was.  We blanched them until crip-tender. 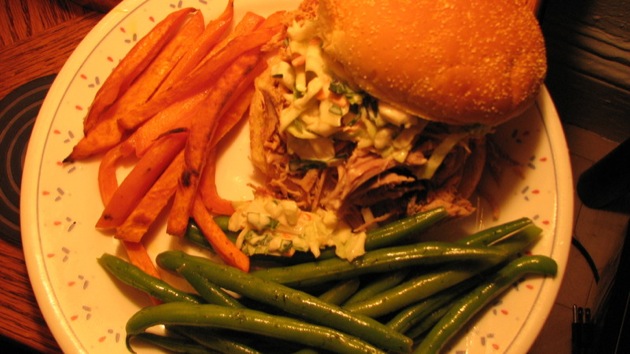 As the sun began to set, we all sat down, starving and ready, having smelled smoking pork for hours.  Luckily, the construction of the Carolina sandwich is simple.  Get a bun.  Slop on some of the pulled pork and top with some coleslaw.

Everyone ate, cooed, and after taking his last bite, Nick retreated onto the couch and fell promptly asleep.