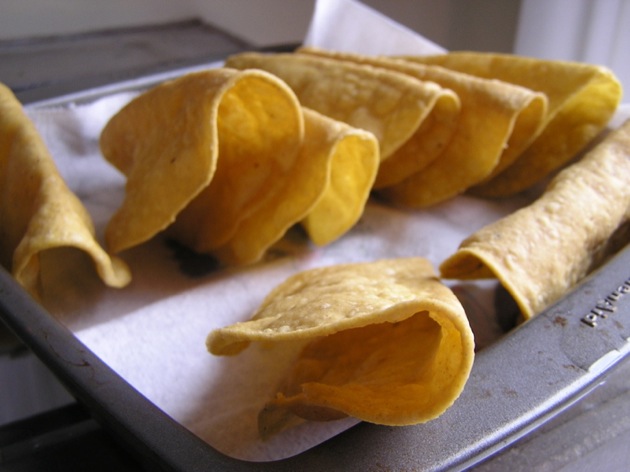 I eat a lot of tacos.  I keep a pack of corn tortillas around at all times.  Thanks to folks like Rick Bayless, I’ve even branched out to mushroom and swiss chard tacos, huevos rancheros, shrimp, and the granddaddy of them all, our very own Fish Tacos .  Glorious, ethereal fish tacos.

This is all rather strange coming from someone who only ate hard shell tacos for the first 16-17 years of his life.  Tacos used to mean one thing: a fried tortilla filled with hamburger, lettuce, tomatoes, and cheese.  Once I was turned on to the pleasures of soft corn tortillas, simply prepared meat topped with onions, cilantro, and fresh squeeze of lime, it was hard to think that Taco Bell was not only unauthentic and unhealthy, but also boring.

I actually hadn’t had a hard shell taco in some 7 years until a few nights ago.  I was at a bar and tacos were available for 99 cents.  Like I said, I haven’t had a hard shell taco in some 7 years.  I picked one up and bit down.  Crunch....  The crispy shell mixed with the sour cream, beef, and the quick shock of fresh veggies.  That shell reminded me of so many tacos I used to chow down on during my younger years.  It was kind of a beautiful moment.  Was my snobbery getting the better of me?  Should this crunchy bastard deserve a place in my taco repertoire?  I decided I needed to make some...from scratch.

To recreate this dish I decided to find the best ingredients and preparations I could find without betraying the origins.  So while the taco seasoning didn’t come from a packet, I did use iceberg lettuce.  Instead of Kraft Cheddar, I used a sharper domestic version.  Why?  If I could have had it my way, many of the hall marks of the hard shell taco would have disappeared altogether.  This also meant I was going to fry my own tortillas.

The biggest thing I noticed was the sheer preparation involved in creating this meal.  It took a hell of a long time.  Even if you cut out the the tortillas, making the beef mixture, cutting up all the lettuce, tomatoes, and shredding cheese, it takes almost three times as long as my simpler taco preparations.  Just to make things even more difficult, I also made a chicken version.

Thank god I did, because the chicken version came out way ahead.  I was more of beef taco guy as a younger lad, but the chicken had more flavor and was far less greasy.  I don’t really eat ground hamburger except as a hamburger, and I’d forgotten how much fat leaks into all the other ingredients.

Much like our School Lunch week , where we created a few high class versions of nostalgic foods, this was probably the best hard shell taco I’ve ever had.  The beef recipe I stole from Cooks Illustrated could knock out any Taco Bell mix.  And freshly made tortillas are a revelation compared to those hard cardboard things they sell to you in the “Mexican” section of the grocery store.  But I will honestly never, ever make these again.  It's such an enormous hassle.  Unless they are cheap and at a bar.  Then it’s fair game to relive the simpler taco times. 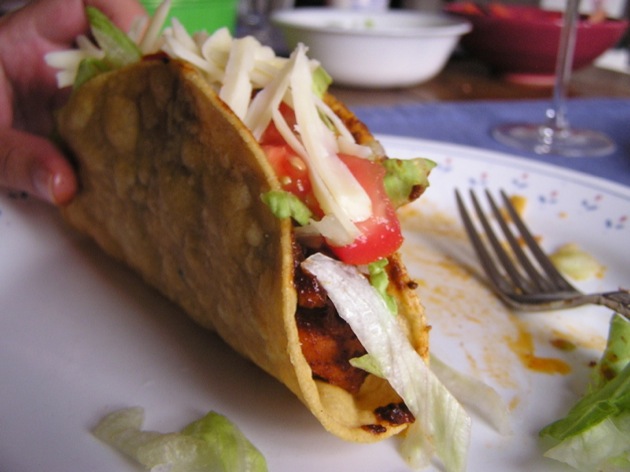 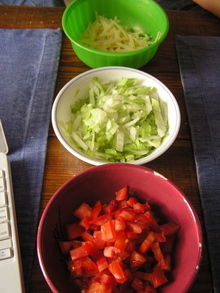 I found it easiest to get the toppings all chopped before starting.  They keep well in brightly colored bowls.  On to the shells! 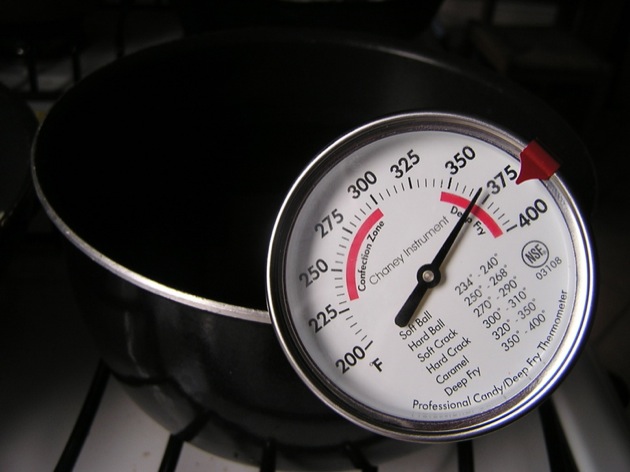 Fill a medium sized pot up half way with Canola oil.  As long as it can fit a tortilla it should be fine.  Heat to 350 degrees, or somewhere around there.  Now begins the dance. 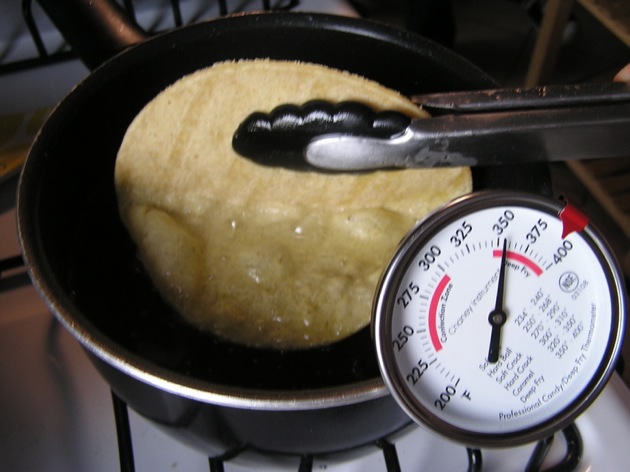 Grasp the tortilla with a tong.  Dip half it in the hot oil.  The submerged half should fry for a few seconds and then begin to float to the top. 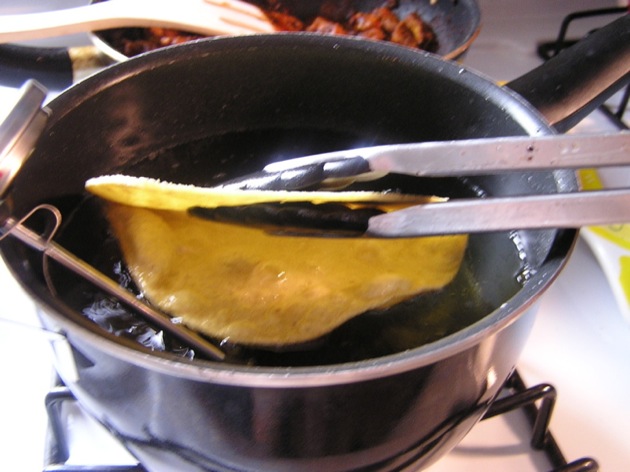 Angle the part of the tortilla out of the oil into the final tortilla shell shape you want.  That side should cook for a total of 30 seconds. 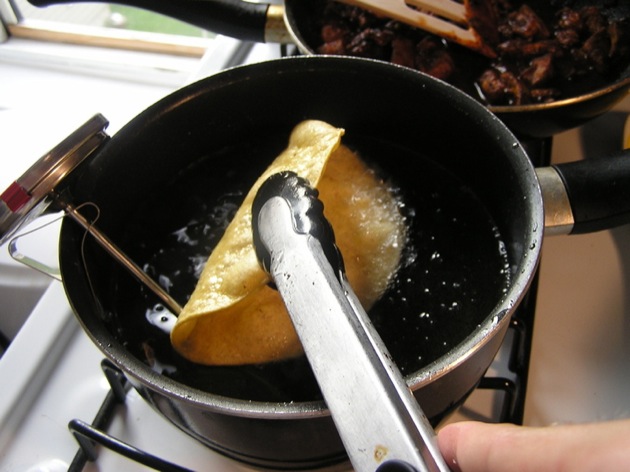 Then submerge the uncooked side, making sure a nice pocket forms.  Cook for about another 30 seconds. 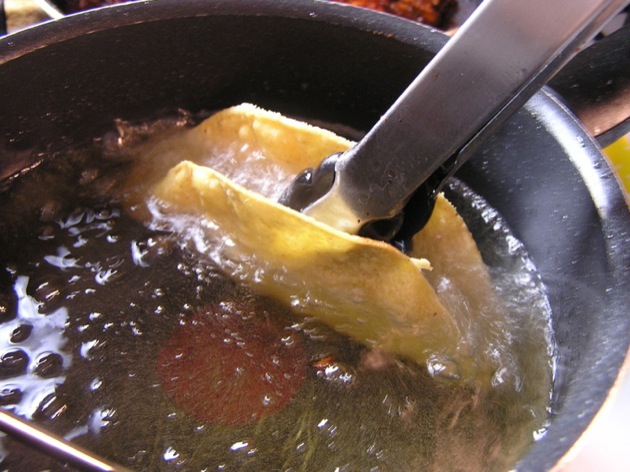 I then submerged the whole thing just make sure it had formed correctly.  When done, remove and drain on some paper towels.  I had to practice with a few until I got the desired crispiness.
On to the beef! 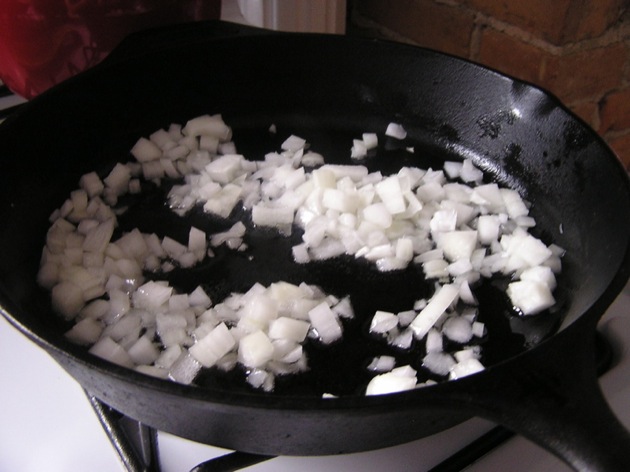 Saute the onions in the oil until translucent over medium heat. 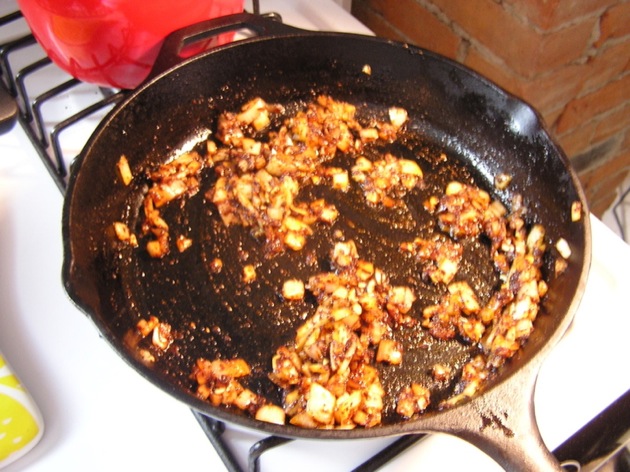 Add the garlic and all the spices, including a large pinch of salt.  Stir constantly for a minute or so.  Then add the beef, and cook until it is no longer pink, breaking up the larger chunks of hamburger the whole time.  If you plan to do chicken tacos, do everything the same, but instead of adding hamburger at this point, add some cubed chicken.  It's that simple.

Add the tomato sauce, chicken stock, brown sugar, and vinegar.  Reduce the heat to medium-low, and cook for 10 minutes.  The sauce should thicken nicely. 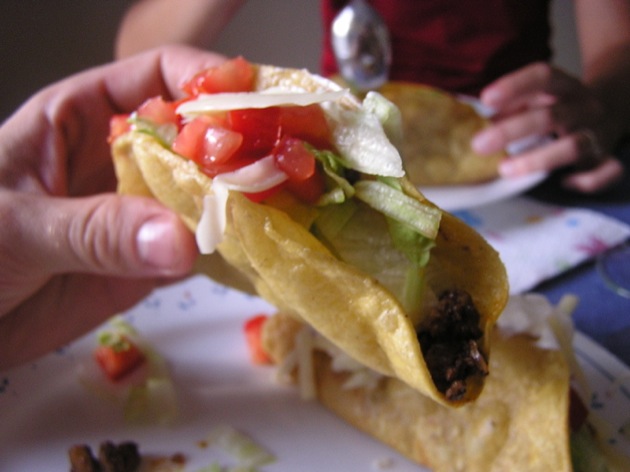