Homemade British Bangers and the Search for Rusk

How to make better bangers 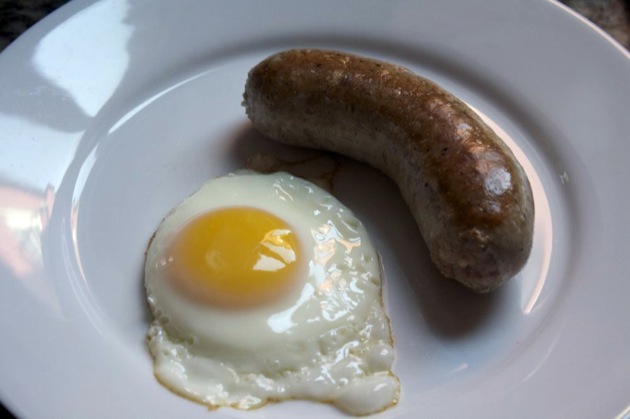 As I was digging into making my own British bangers for my Full English Breakfast challenge , I kept stumbling onto the same sad story which may or may not be complete bullshit: During the early 20th century thanks to two World Wars, meat was scarce in England and pork sausages were padded with some grains and extra liquid to help stretch the meat reserves. When cooked, these padded sausages had the tendency to burst out of their casings and the "banger" was born.

Exploding sausages! How cool is that?

Though this tale may be made up, it oddly shines a light on one aspect of the banger--besides the exploding part--which turned out to be absolutely essential: filler. There are stories about percentages , discussion on what kind of cereal to use, and cautionary posts about other nefarious ingredients that are included , but the case remains the same: Bangers must have filler or they simply aren't bangers. 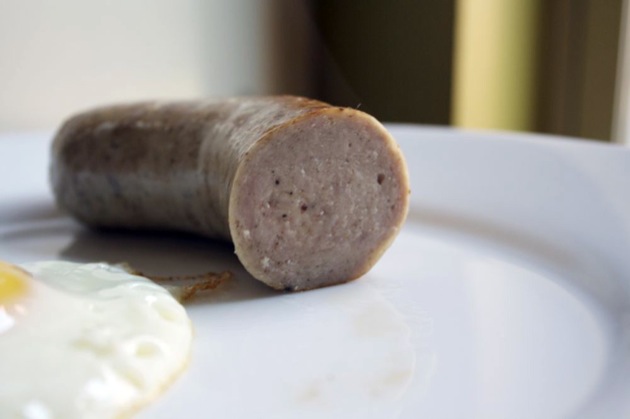 Even famed British chef Heston Blumenthal seems to agree. In his book and TV show, In Search of Perfection (check out the episode on Youtube ) he sets out to create his perfect banger. At first he figures that the sausages should have no filler at all, just meat and seasonings. But the results seem to sever the tie with the sausages of his youth--his 8 year old self that cooked sausages over a campfire. The filler-less sausage may taste great, but it doesn't taste right. Heston eventually embraces the filler to a uniquely obsessive level (let's just say that toasted bread water is involved).

So for my bangers, I knew I needed some filler of some kind, and I figured that breadcrumbs would be the logical choice. But what was most fascinating was that the many recipes I found called not for breadcrumbs, but for rusk. And thus a new question was born: What the hell is rusk? 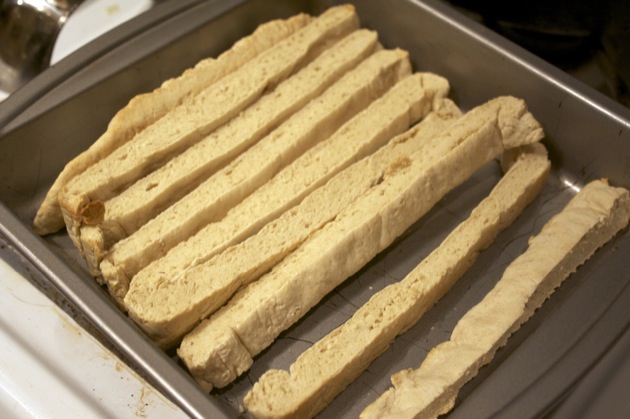 Turns out rusk comes from the crumbled remains of an English biscuit--an egg-less bread that is dense and flat. I flirted briefly with just moving along and using good old American breadcrumbs, but eventually got sucked into the black hole of a sausage making forum and came across this interesting tidbit: Rusk can absorb more liquid than regular bread crumbs. This, in turn, leads to juicier and more tender bangers.

Where does one find rusk? I actually began a search for English grocery stores in Chicago (a particularly worthless search), before I questioned the concept of buying rusk in the first place. I mean, I always try to make my own breadcrumbs at home, why shouldn't I make my own rusk?

So I did what anyone would do, and decided to learn how to make an English biscuit just so I could let it go stale and then crumble it up. Luckily it's really easy. Just mix some flour, baking powder, water, and salt together and bake.

Everything else is easy. The flavorings are simple and mild. Usually a bit of sage and nutmeg, salt and pepper. For help with the exact recipe I consulted both Heston Blumenthal and this great sausage site by Len Poli .  It's all stuffed into hog casings, which isn't exactly the easiest thing in the world, but I've done it enough times to know how to get through it.

The hardest part about making a banger is actually cooking them. The whole exploding sausage may sound exciting, but much like dramatically popping open a champagne bottle, it doesn't taste very good. Once the casing breaks, juice spills forth, and you're left with a drier sausage.

I found it extremely hard to sauté them in a pan. A few burst open. Once, the casing was nicely browned, but the insides were still pink. 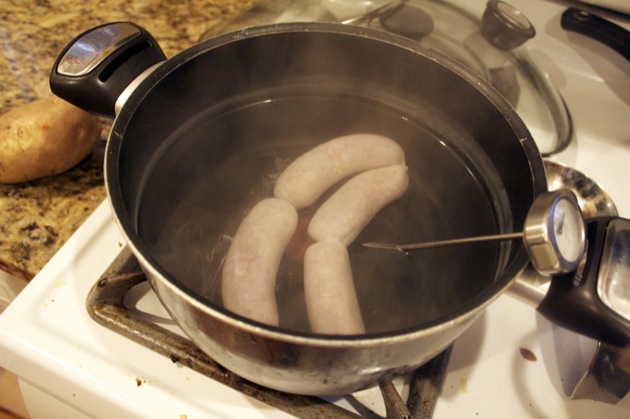 For help, I turned back to Heston. He poaches the sausages in liquid for a while, and then just crisps them up in a skillet. This worked perfectly.

I'm one step closer to my Full English Breakfast. 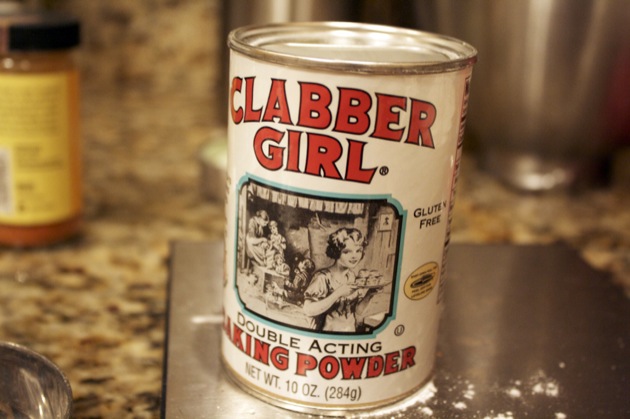 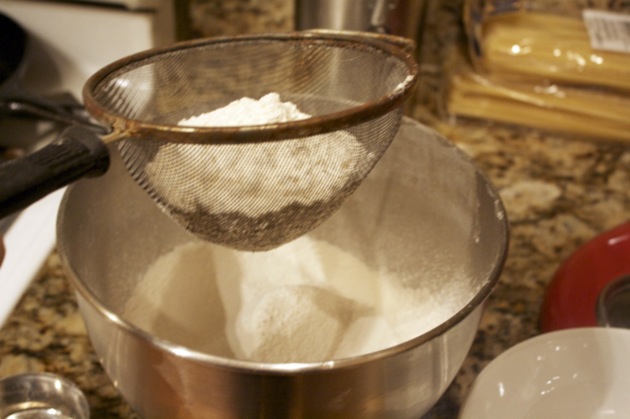 Preheat the oven to 450 degrees. Meanwhile, sieve all of the dry ingredients into a large bowl. 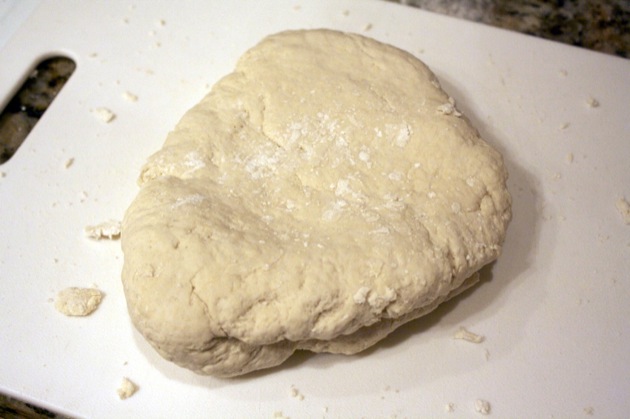 Add the water and use your hands to form it into a dough. 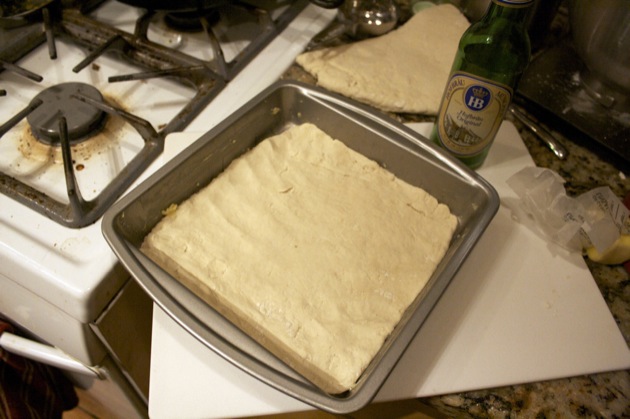 Smear some butter over a baking sheet. Roll out the dough until it is about 1/2" thick. Transfer it to the baking sheet. Place in the oven for 10 minutes. 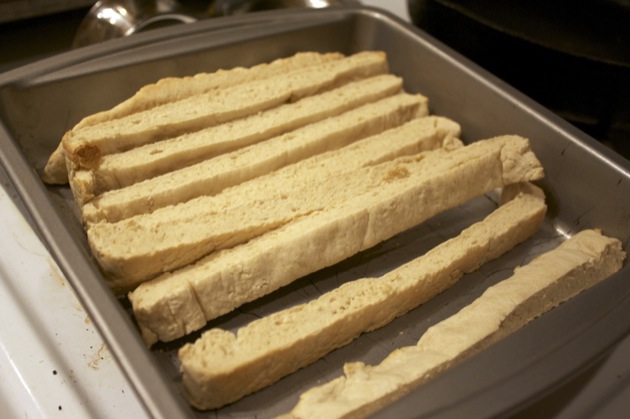 Remove the sheet, cut the dough into 1/2" inch strips. Set each strip on its side. Lower the heat to 375 degrees and then return the pan to the oven. Cook for 10 minutes. If the bread is nice and firm, then remove and set aside. If it is still soft, then flip all the strips and place back in the oven for another 5 minutes or so.

Let the biscuit sit out over night. You want it to be stale. 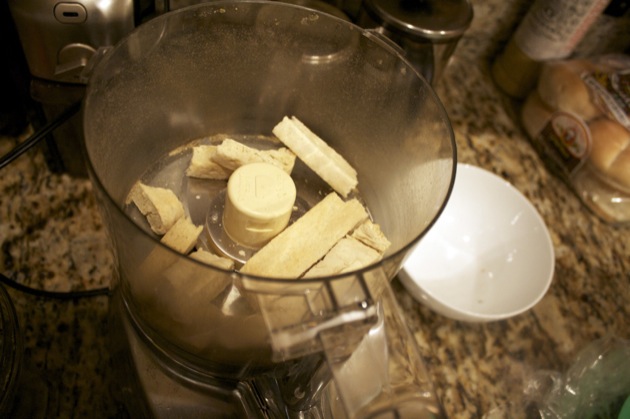 Toss a quarter of the biscuit pieces into a food processor. Process until they are fine.

Sieve the rusk into another bowl. Repeat until you have a cup of sieved rusk. 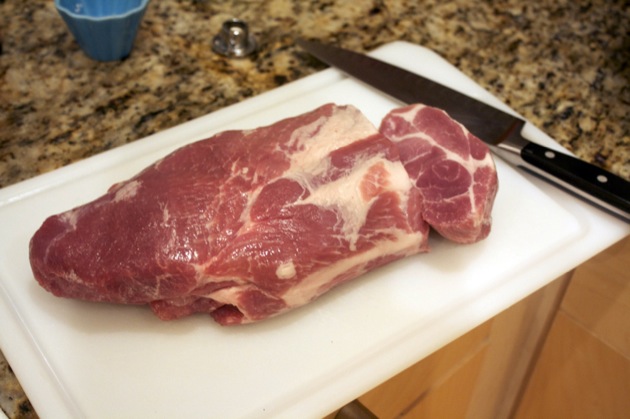 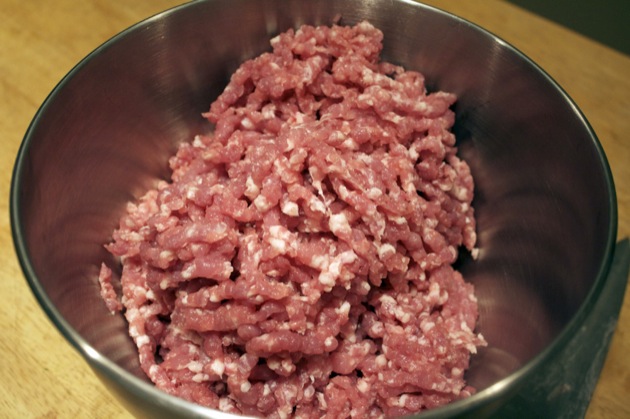 Chill the pork for an hour or so before you begin. Grind the pork through the medium die. Return it to the freezer. 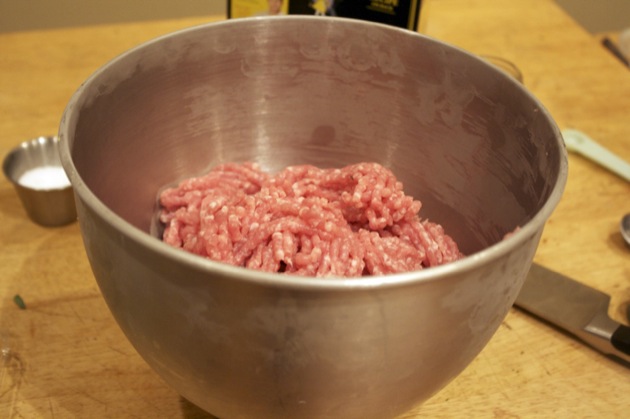 After thirty minutes or so, remove it from the freezer and regrind throught the small die. 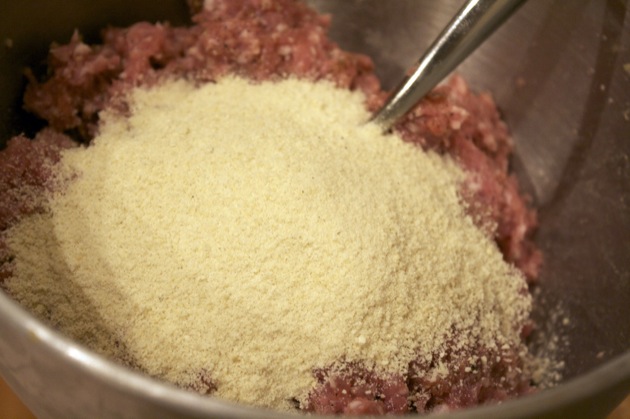 Meanwhile, mix together the rest of the ingredients. Dump these into the bowl of a Kitchen Aid. Add the pork. 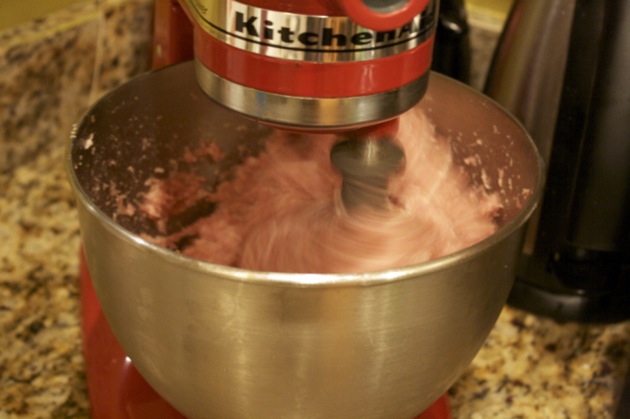 Using the paddle attachment, mix the ingredients for about a minute until they are fully incorporated together and have a sticky texture. 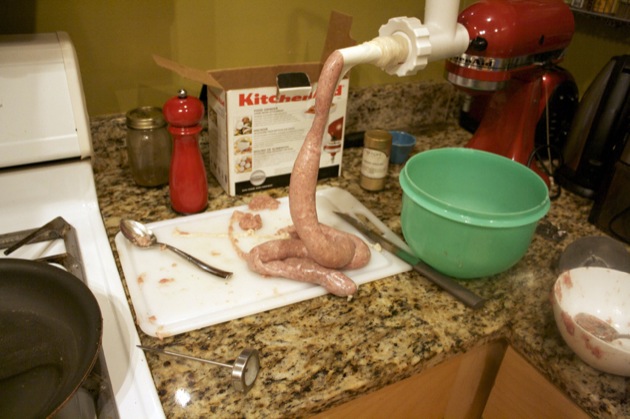 Stuff the pork mixture into 32mm hog casings. For more help with the stuffing procedure check out some of my previous attempts ( hot dogs , Wisconsin bratwurst ).

How To Cook Bangers 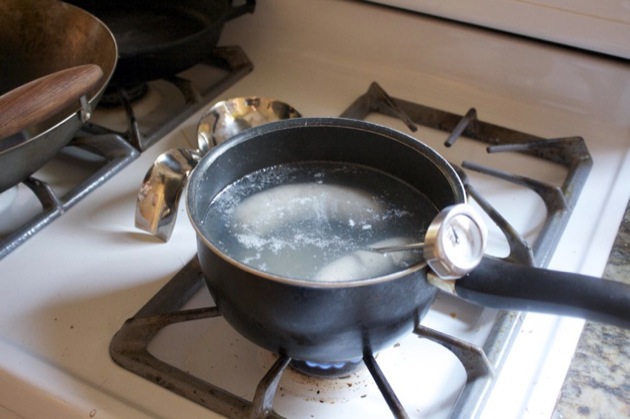 Bring a pot of water up to 149 degrees (or thereabouts). Add as many sausages as you'd like to eat at the time. Cook these in the water for 20 minutes, making sure to keep the temperature as close to 149 as possible.

Remove the sausages and dry them. 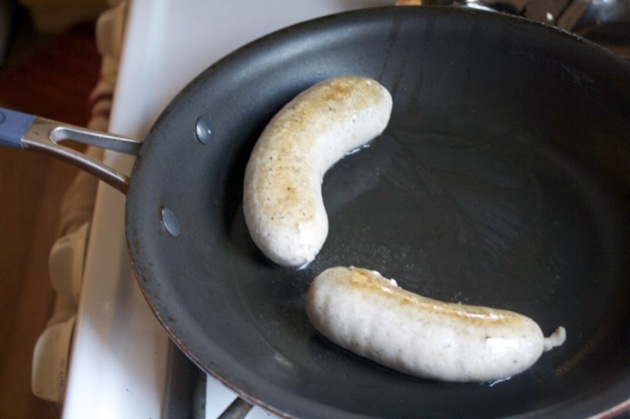 Pour a little canola into a skillet set over medium heat. Add the sausages, and cook until browned. Flip them often. 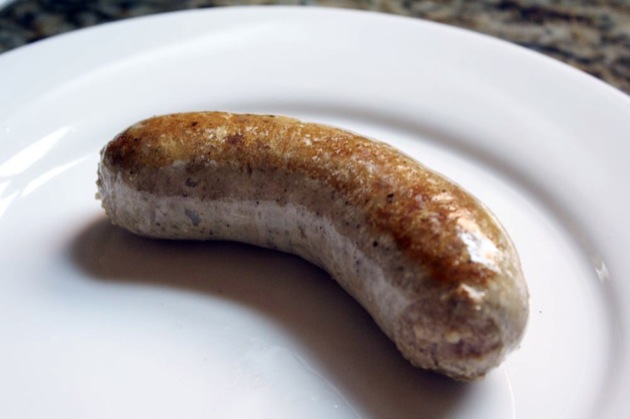 Serve the sausages with a fried egg, with some mashed potatoes and onion gravy for Bangers and Mash , or use as one of the many elements in a Full English Breakfast.