How to Make Proper Barbecue Chicken

No offense, but you're probably doing it wrong 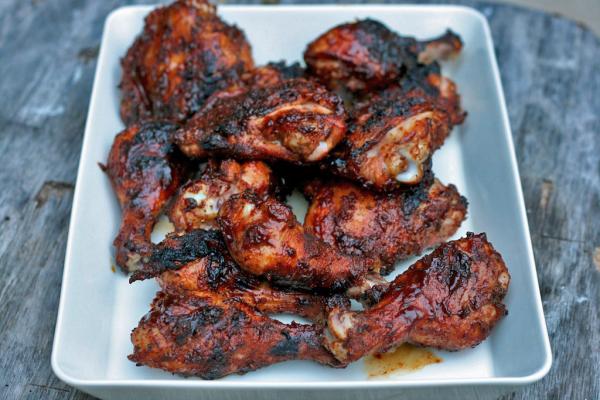 There's a lot of misconception when it comes to "barbecue." The problem is the word itself. It's used as a synonym for grilling, refers to the grill itself, or to the meat being grilled; it also has a sauce named after it; and sometimes it's just the word for the party itself held outdoors in somebody's backyard. What, actually, is "barbecue"?

American purists see things a little differently. To them, "barbecue" is a wonderful Southern tradition of slow-cooking with indirect heat and woodsmoke to transform cuts of meat, often inexpensive ones, into succulent, unbelievably delicious results. That's true barbecue. Anything else on a grill cooked hot and fast rather than low and slow is called grilling . Brits and anybody else in their commonwealth be damned. 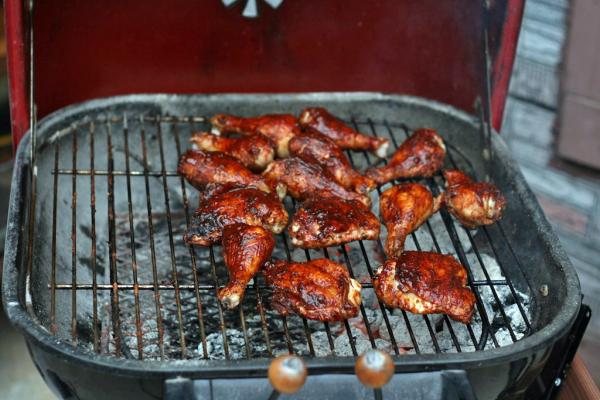 Which brings us to barbecue chicken, a staple of the summer grill. Does it earn its name in the true sense of the word?

The sad fact is that often times the answer is no. The way I've seen it cooked most is like this: the chicken is slathered in sauce, the coals are lit (or the gas grill is fired up to high) and it's then grilled until the inside is no longer pink. Seems simple enough.

The problem, and the result, is charred all over the place, a crapshoot for succulence, often dry and sad. Not to offend you or your talented uncle manning the grill, but he's probably cooking your barbecue chicken all wrong. 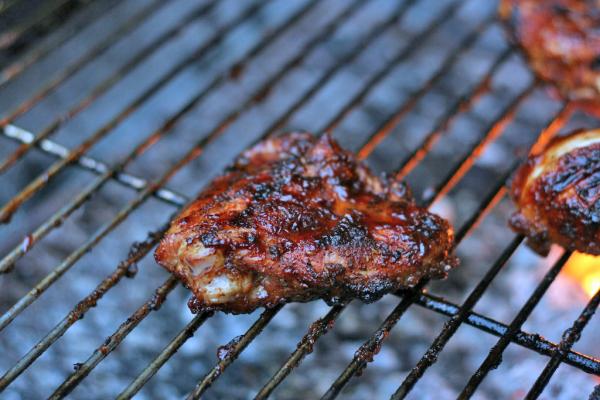 I believe good barbecue chicken is low and slow followed by fast and hot; that's the easiest way to achieve fantastic results .  (Now, before we get too far with this idea, it's important to mention that even this method deviates a little bit from the barbecue orthodoxy for chicken, which stipulates that the meat should never see high heat at all.  Bob Gibson, arguably the most famous name in barbecue chicken, believes that the chicken should be cooked at a very cool 300 degrees until it's done, with no exposure to caramelizing high heat at all.)

This way is a vast improvement over most methods, and won't take all afternoon. But it will take a couple principles:

As the chicken cooks on a relatively cooler part of the grill covered in a pungent rub of spices--essentially slow-roasting in its smoky environs--the skin gradually crisps into a mouthwatering crustiness and the interior juices baste the chicken while it cooks.

Then, and only then, we see the appearance of barbecue sauce, when the chicken is essentially finished cooking. Then it gets painted on the chicken liberally and constantly over a hotter part of the grill, allowing it to caramelize and turn syrupy just the right amount. Then you devour it like crazy.

For the rub, I turned to a famous thing "magic dust" invented by barbecue god Mike Mills. A blend of mustard powder, paprika, granulated garlic, and other goodness, it's good enough to mix up and keep around for rubbing on just about anything, including sauteed vegetables. I recently rubbed it on some pork chops and they were stellar.

Combine ingredients in a container and mix thoroughly.

To begin, mix up the magic dust and sprinkle it pretty liberally all over the chicken. While you can proceed right away, see if you can plan ahead long enough to let the chicken sit, covered loosely in the refrigerator, for a few hours or even a day. The magic dust has salt in it, so there's no need to salt the chicken otherwise.

While there are great bottled sauces out there, and they'll work pretty well, I seem unable to avoid the possibility of making something from scratch.

It's easy enough: just take ketchup and start doctoring it up. Homemade sauce ups the game considerable, and for barbecue chicken, ketchup-based is probably the way to go. Common augments include soy sauce, brown sugar, mustard or mustard powder. I used this recipe adapted from Steven Raichlen.

Prepare the barbecue sauce by putting all the ingredients into a small saucepan and bringing them to a boil. Turn down the heat so that it just bubbles a tiny bit and simmer it, whisking once in awhile, until it's dark and thickened, 10-15 minutes. 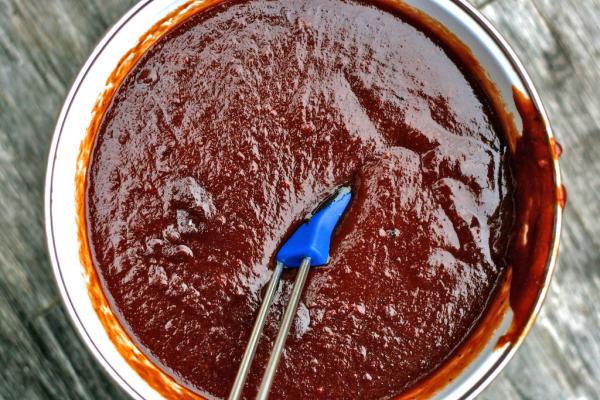 I used a charcoal grill, but you could also do the gas route by turning on just one side. In the case of charcoal, bank all the coals on one side of the grill and line up the chicken on the cool side. Cover the grill to build up some heat and cook until the chicken starts to turn golden and brown, 25-30 minutes. 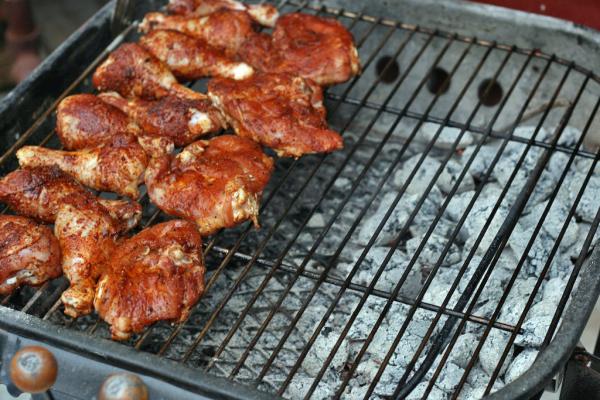 Make sure to switch the pieces halfway through so that the ones closer to the coals trade places and get equally cooked.Once the chicken is golden and looking close to done (a thermometer should read somewhere in the neighborhood of 150 degrees; by the end the chicken should be up to 165), move the chicken nearer to the coals and start brushing sauce on the pieces, turning often to completely cover them with sauce. 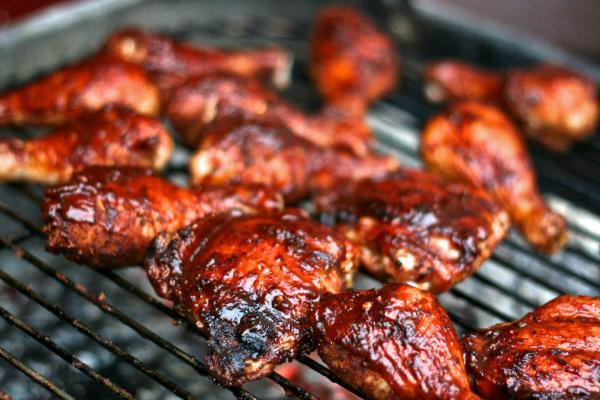 This is a pretty focused process, so stay in front of the grill brushing, turning, and moving the pieces all over to get them equally cooked and sauced. Try to cook the skin-side down as much as possible. Just as the sauce starts to turn syrupy and caramelized, the skin should be crisping up beautifully.

Once the internal temperature is 165 degrees fahrenheit or hotter and outside is all dark and crisp (some black is okay, but I try to keep it to a minimum), remove the chicken to a platter and let it rest for at least 5 minutes. Serve!