Can you replicate the best English breakfast at home? 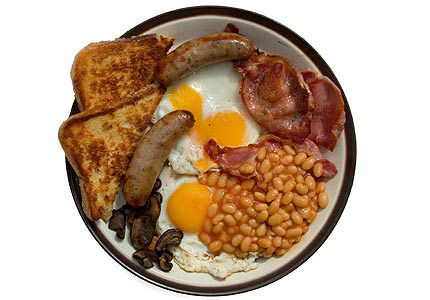 To eat well in England you should have breakfast three times a day.
- W. Somerset Maugham

I survived my half a year in England on a diet of boiled potatoes, canned peas, Heinz beans, and 99p egg and cress sandwiches I purchased from a convenient store. The dollar was nearly worthless next to the mighty pound at that time, and I hoarded what little cash I could for bus passes and the odd pint, relegating whatever was left to keeping me alive. Needless to say, I ate miserably.

Except during breakfast. While I could never afford a nice dinner, I could occasionally dig up a few pounds for a Full English breakfast. To get it right is to have a plate filled with bacon, sausage, eggs, beans, toast, mushrooms, and tomatoes . If I was lucky, I'd even get a nice cup of tea thrown in for free. After days of meagerly getting by on starches and canned vegetables, this meat-heavy plate was a godsend.

For better or worse, when I dream of food in England I dream of this. Great plates of simply prepared food, where the quantity seemed the most important component of all. I certainly didn't eat it every day, but when I needed it the most -especially after a night out on the town- that massive plate of fried goodness was there for me. And for that reason I'll always have some special place in my stomach for this embarrassment of fried wonder. That is why now, for some odd reason, I'm struck with a strange urge to make it all...from scratch .

See, while it may seem like I could just go out and purchase some sausages, bacon, and beans and be done with the craving, each one of those elements is different over there than it is here.

American bacon may be a wonderful thing, but it's also sweetened and smoked, unlike its English counterpart. Their sausages, lovingly referred to as bangers, are stuffed with breadcrumbs to give them a different texture. And the beans...well, I don't have any idea what those are. That means I'll need to stuff my own bangers, cure my own bacon, bake the right kind of bread for toast, and even find the English formula for baked beans. While I won't grow the tomatoes or forage for the mushrooms, I think this is still going to be a massive project.

It's only now that I realize the simple truth that a Full English breakfast makes no sense at all. There is no semblance of balance, no acid, no spice. About the only common component is that everything except the beans are fried, from the meat to the mushrooms, and even -if you listen to the purists- the toast. The lonely tomatoes are about the only acidic element on the plate.

My favorite foods are spicy and acidic. I'm much more comfortable dealing with Mexican, Indian, and Korean cuisine than I am dealing with a plate of food where the only color comes from fried tomatoes.

Yet, there is something itching in me that believes this could be the most delicious breakfast I've ever consumed. Can you imagine a meal where so many of the main components were lovingly prepared from scratch and then were combined together on the same plate?

Anyone else have fond memories of this meal or know some resources to help get me started?