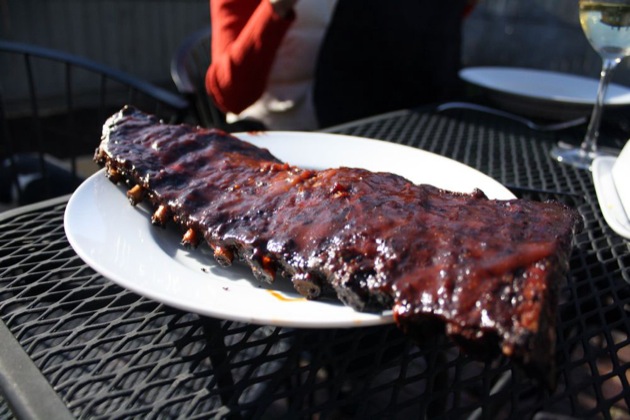 I returned home from a weekend in Ohio to to find that a fire had struck Honey 1 Barbecue .  The building was still intact, but the smoking aquarium where they cook all their meat had been destroyed.  According to owner, it might take a few months to get back in order if smoker is salvageable and the insurance company gives up the money quickly.  It could take much longer.

I found the news hard to take.  It's not my absolute favorite barbecue in the city - that would probably be Smoque - but it was located about two blocks from my house and it was damn good.  Nearly every day I would exit my apartment and be greeted by the smell of burning wood and pig wafting through my Bucktown neighborhood.  It lured me in at odd hours.  That smoke is probably the reason I've eaten more barbecue in the past 6 months than in my previous 25 years combined.

Though I've eaten more in Chicago, I actually caught the bug last summer.  That's when I rigged my brother-in-law's gas grill into a slow and low smoking machine, and made a pretty impressive pork shoulder .  I got into smoking business because of Mike Mills' Peace, Love, and Barbecue .  Barbecue was so much more involved and complex than I imagined.  It was an art, something to be fussed over endlessly.  So when I picked a weekend to go visit my sister, my brother-in-law and I planned to make some serious ribs.  He had a little practice with them, but I had none.  All I had was some notion of what I wanted. 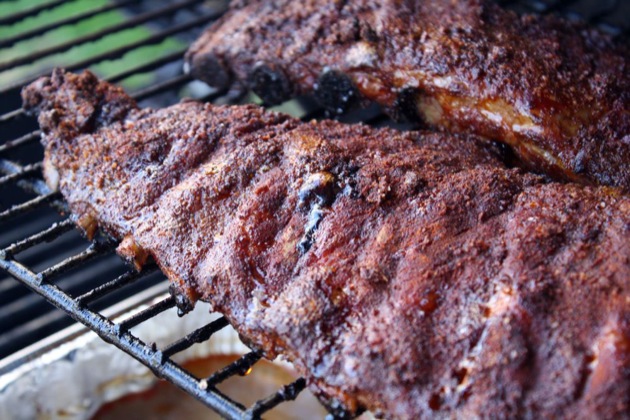 Though I had my barbecue book, I couldn't have done this without Honey 1.  I've learned a lot of important lessons by just pigging out at that place.  The biggest one is that you don't actually want ribs to "fall of the bone".  This is called "bone shine" or "shiners".  You want the ribs to have some pull to them.  As Jeffrey Steingarten explains in one section of the book ribs are "supposed to separate right down the middle but not fall of the bone."

I was determined to get this right.  Like the pork shoulder I attempted last summer, I followed Mike Mills own Apple City Barbecue recipe.  It starts with a rub of his famous Magic Dust and only in the last seconds a mop of their barbecue sauce .  Also, instead of smoking the meat over hickory or other normal woods, Mike Mills recommends apple wood, something we miraculously found at a hardware store.  We got a nice full tank of propane and got to work.

I found the whole activity of smoking ribs a little unnerving.  While last summer I worried about the pork shoulder constantly, I knew it would be done when I hit a certain temperature.  I could poke that sucker with a meat thermometer and instantly figure out whether it needed more time or was ready to come off the grill.

Ribs aren't that easy.  Since they are so skinny, temperature is irrelevant.  The only way to know if they are done is to examine it in a very unscientific way.  Here's what Mike Mills said about he subject:

There should be a slight bend or give to the ribs, as though they're bending a bit in the middle.  If they move up and down, straight as a board, they need to cook a little longer....If the meat slips entirely away from the bone, then they are way overcooked.

This could have happened anywhere between 4 and 6 hours.  Of course at around the 4 hour mark they started looking quite done.  We had a group of neighbors over casually talking and I was going crazy because the ribs were done and I WAS NOT going to share this with anyone.  All the warning signs were there.  And I spied a portion that looked like it was thinking of leaving the bone.

We had to eat that moment, I couldn't wait any longer.  So I carefully let it known that we were eating and that everyone else had to leave. 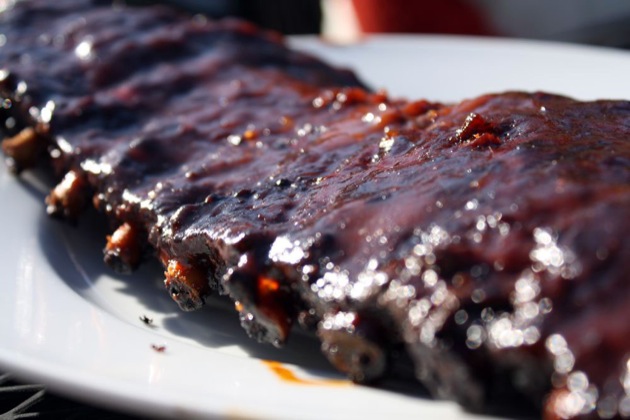 And I'm so glad I worried, because the ribs were right on.  They were tender and juicy, with an incredible bark from the dry rub, and sweet and spicy from the sauce.  I finished them all in about 5 minutes and wanted more.

About the only bad thing I can say is that I wish they had more smoke flavor.  Part of the problem is that I've reached the apex of barbecue while using my brother-in-law's gas grill.  I need to build a proper smoker and use real charcoal.

But they were still some of the best ribs I've ever had.  Of course, I hope to broaden my knowledge this summer.  I'm planning on visiting both Memphis and eastern North Carolina for some serious barbecue lessons.  Then the real obsession can start. 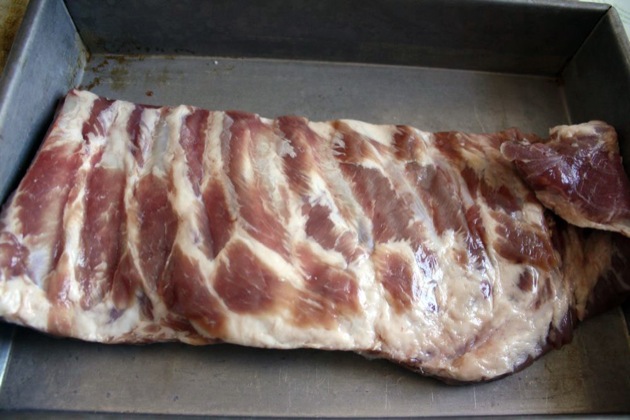 Mix together a batch of the magic rub.  Clink on the link to take you to the recipe. 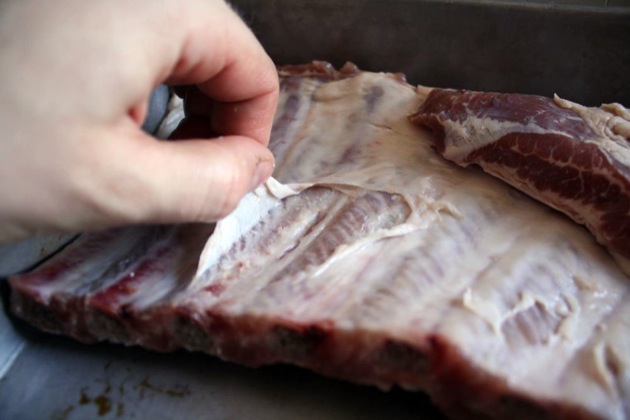 Remove the silver skin from the bone side of the ribs.  Just start at the base of the ribs, and slide a knife under the skin.  Carefully run the knife under the skin until you reach the top of the bone.  Obviously you don't want to pierce the meat.  Once you reach the top the grasp the skin and pull.  They should pull right off.  Using some paper towels will help you grasp the skin easier. 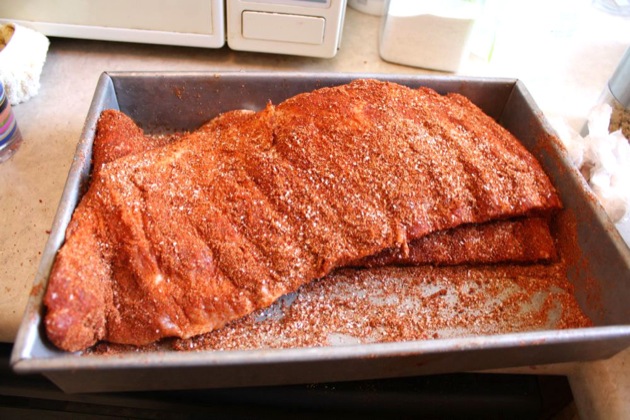 Cover the ribs with a liberal coating of the magic dust.  Stash in the fridge for at least an hour, and preferably over night. 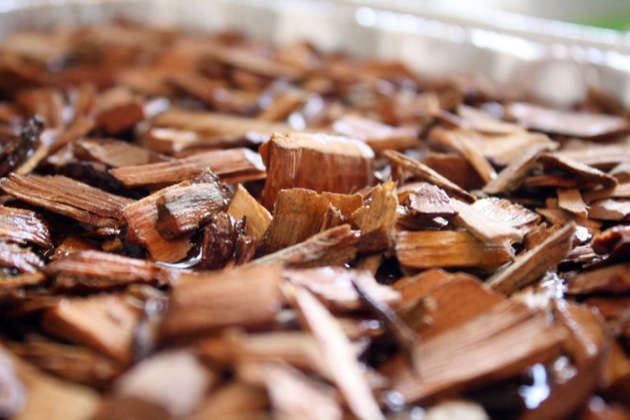 About 30 minutes before you want to start soak the wood chips in water.  I'm still not sure how much you should use.  Anyone have any ideas? 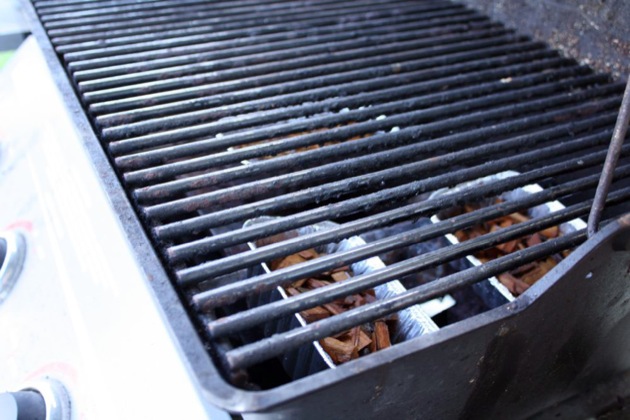 The cooking instructions depend wildly on what kind of grill or smoker you use.  I'll just walk you through what I did on my brother-in-law's gas grill.  We turned all the burners on to high and shut the lid.  Once the temperature reach 210, we reduced the the burners on the far left and far right to low and then turned off the middle on. 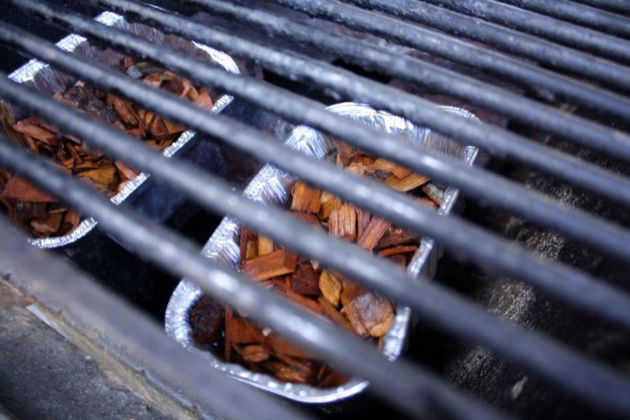 Because you can't just toss wood chops onto the fire, I placed them in little aluminum trays filled with various amounts of water.  One container had none, while a few were nearly halfway filled.  This was a little trick my brother-in-law figured out.  That way the first container filled with no water will smoke first, and by the time it is done smoking, the water in the other containers will have evaporated and the chips will be about ready to smoke. 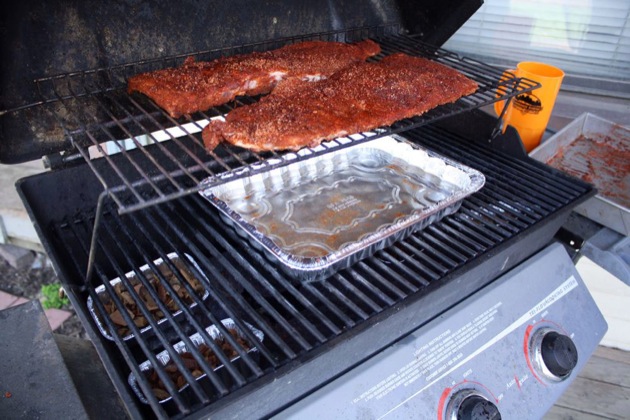 Add a large aluminum tray on top of the tray and fill with water.  This will help keep the meat moist during the cooking.  Place the ribs on the top rack bone side down.  Close the grill and try to maintain a temperature between 200 and 210 degrees.  Smoke the ribs for 4-6 hours.  Mike Mills says not to move the ribs too much.  I flipped them once during the process and that was it. 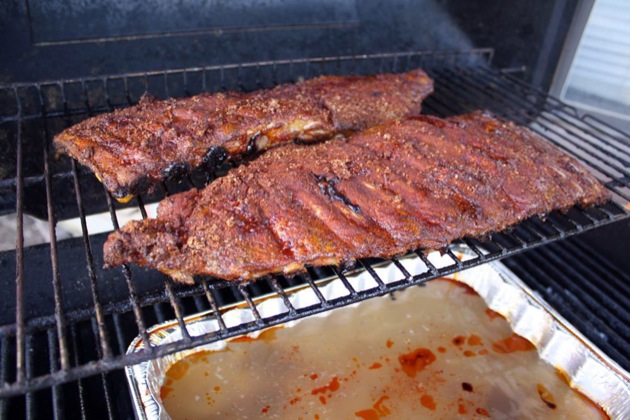 Check the ribs about every 20 minutes or so.  Look out for the moments when it looks like the ribs are sweating.  When you see liquid forming on the top that means it is time.  This is the point when the pores of the meat open and absorb flavorings. 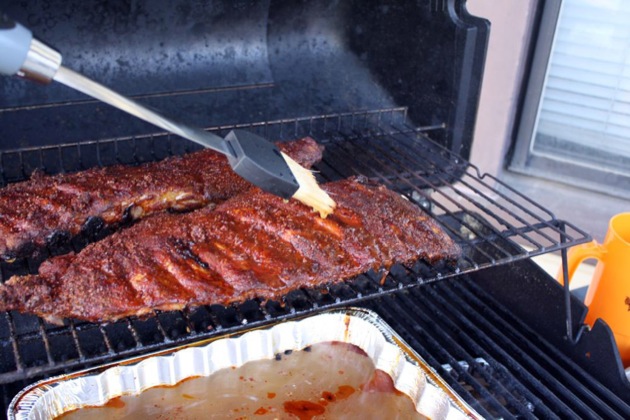 When they sweat baste them with the apple juice.  This should happen about 3 times during the smoking.

It's a little difficult to know when they are done, so I'll repeat what Mike Mills said:

There should be a slight bend or give to the ribs, as though they're bending a bit in the middle.  If they move up and down, straight as a board, they need to cook a little longer....If the meat slips entirely away from the bone, then they are way overcooked. 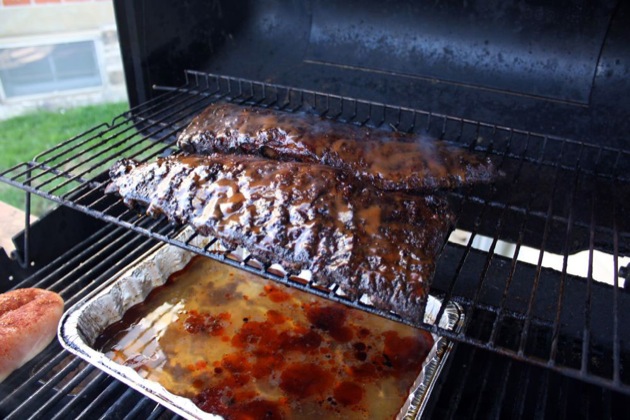 When they look about done, only then do you spread some of the barbecue sauce on. 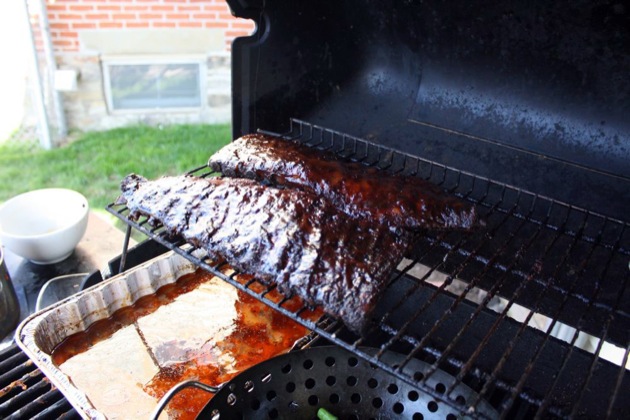 Cook for another 10 minutes and then remove and eat. 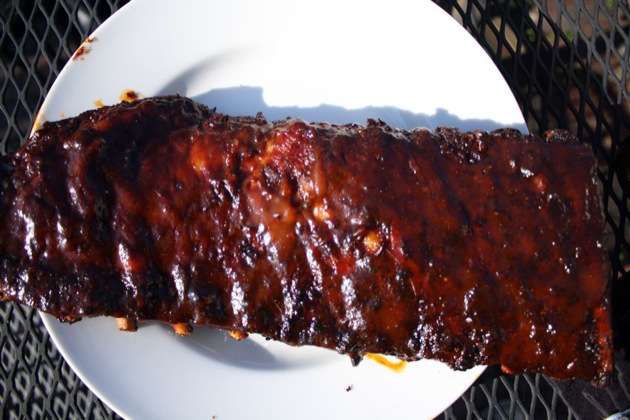