My Favorite New Dinner: Fregola with Zucchini and Pine Nuts 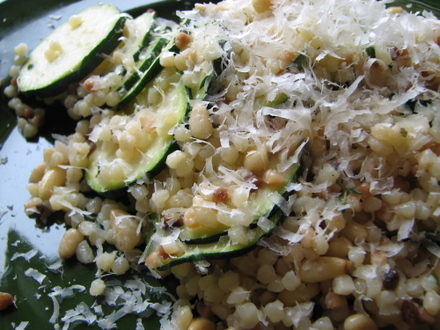 A couple months ago I was eating at Otto , which is the place to bring friends who are visiting: a bit touristy, but very affordable; good to great food that’s easy to share; and most importantly, they have olive oil gelato , which floors just about everyone who tries it.  One thing we always do is order lots of the $4 vegetable dishes, like tiny radishes with anchovy-mustard sauce, or salsify with blood oranges.

This particular time, we were convinced to order the “fregula and sweet corn” option.  Half our party was hailing from Indiana , a people largely unable to resist ordering corn when available (whether for nostalgia’s sake or to critique its quality compared to “what’s back home”).  So we ordered it.  And it wasn’t the corn that we got so excited about—it was this mysterious “fregula.”

A large, lumpy pasta-type substance--sort of like cous-cous but more haphazard and not nearly as uniform.  And far more fun to eat: whenever I eat cous-cous I feel like I’m trying to chew on a glass of chicken broth.  It’s so unsubstantial that it’s frustrating and most of it goes down the hatch without a chew.  This, on the other hand, is meaty, chewy pasta that puts up a respectable fight, then succumbs and releases a wonderful wheaty, nutty taste.

Must find this fregula!  I searched far and wide, on the Internet and elsewhere, with no luck.  Until one day I was at Raffetto’s on Houston St. in Manhattan, buying a sheet of pasta for my new pasta machine.

I bought some dried pesto-pasta, some homemade sauce, the life-changing rice pudding (seriously good), and then began perusing their small pantry section.  Jars of anchovies, paste of anchovies, imported tomatoes, jarred pesto—wait.  What’s this bag that looks like cous-cous?  I snatched it off the shelf with a plastic crinkle and couldn’t believe my eyes: fregola .  Not fregula, like I’d Googled so many times in vain.  Otto, why did you have to have a typo on your menu?  No matter.  I’d found the culprit. (Interestingly, now when you Google “fregula” many results appear.  I’m not sure what the problem was). 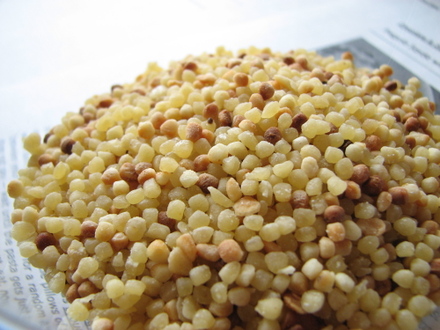 Back home, “fregola” revealed page after page of ruminations on this great food.  I found out that it’s made from semolina and water, dried, and most importantly, toasted.  This lends it the nutty, robust flavor.

I chose a simple dish from Chocolate and Zucchini that called for finely sliced zucchini that doesn’t need to cook, a handful of pine nuts, and some Parmesan cheese.  Since then, I’ve had this for lunch and dinner more than once.  It comes together beautifully and simply, with the pine nuts disguising themselves amongst the various shades of fregula and the zucchini providing a satisfying crunch, salty Parmesan
pulling all the elements together.

Fregola with Zucchini and Pine Nuts

Adapted from Chocolate and Zucchini .

The fregola provided no directions for cooking time.  So boil some salted water, toss it in, and sample periodically until it's tender but with a little bite.  In the meantime, slice the zucchini and grate the Parmesan.  In a dry nonstick skillet, toast the pine nuts over medium heat until fragrant and just a bit brown.  Drain the pasta and toss with the remaining ingredients.  Season with salt and pepper and serve immediately. 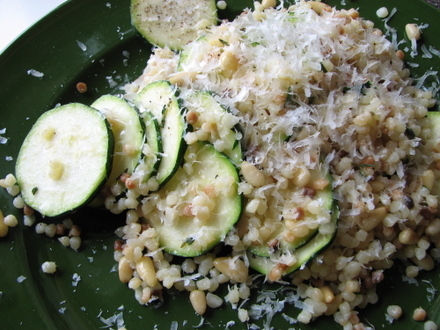