My Perfect Daisy with Homemade Grenadine

It's pink, but manly 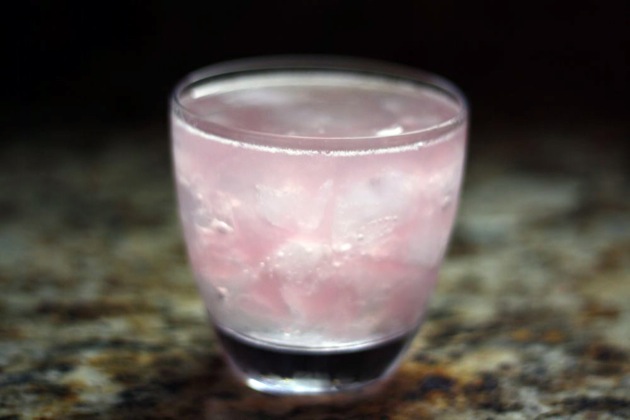 To stretch the metaphor, the essential DNA of the Daisy involves adding a little soda water to a Sour (spirit, citrus, sweetener). Beyond that, though, you can take some liberties .
- Imbibe Magazine

If you're not too careful, cocktails can swallow you into an alternative universe of reason where there are no right answers. The perfectly proportioned Negroni , which I wrote about a few weeks ago, is the exception to the rule--no messing with that golden combination. Everything else is confusing. I suppose it shouldn't be that surprising considering most drinks were born behind a bar by the slightly intoxicated. That partly explains why I've had to take the horrible job of mixing up and drinking a half dozen versions of the Daisy to finally land on my favorite recipe. I know, it's a tough job, but the result is a refreshingly tart drink that grips your taste buds like a Margarita with some serious heft behind it.

The Daisy is an old drink, the kind of glorious elixer that existed 150 years ago. According to David Wondrich it used to be one of the most popular drinks of its day. But the recipes for the drink differ so wildly, it's hard to pin down exactly what it is. From what I can tell it's really just a liquor mixed with lemon juice, a sweetner of some kind, and soda water. In the beginning the sweetner was often an orange cordial (like Triple Sec or Curaçao ). So if you use Brandy as the liquor, the drink is oddly similar to the Sidecar (one of my favorite cocktails). When you sub in tequila and change the lemon to lime, you have the Margarita (which explains why a good Daisy sometimes reminds me of one). Of course, the legal paternity papers are not present to pin this down for sure. 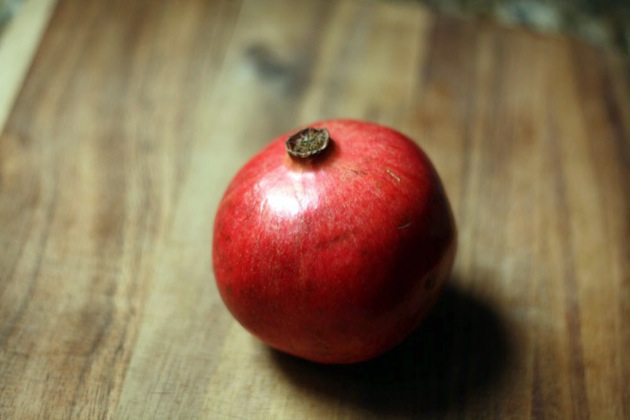 But somewhere along the way the Daisy seemed to switch from orange cordial to grenadine , and this is where I became interested. I'm sure the organge cordial is a great addition, but I figured now was a great time to face my fear of pomegranates. See, I'm kind of scared of them. They look like a regular old fruit on the outside, but once you crack them open dozens of little seeds spill out onto the counter, staining everything they touch bright red. I don't know why this irks me so, but it just does. But I figured if there were any time to overcome a weird fruit fear, it'd be for a drink.

Before we get started, you might wonder why I didn't just saunter off to the liquor store and buy pre-made grenadine. But those mixes often don't actually have any pomegranate juice in them. It's usually just dyed red and sweetened beyond reason. Making your own is the way to go.

And it turns out it's a relatively simple process, especially after I found this trick for juicing pomegranates from Saveur . It couldn't be easier. Just roll the pomegranates around on a cutting board, pressing down on them with your palm. Then cut a tiny slit and squeeze as much juice out as you can. It's relatively clean and you'll get a good 2 to 3 ounces of juice out. That's more than enough for a drink.

From what I could find there are two methods for making grenadine. The most common method is to reduce the pomegranate juice in a pan by half and then add the sugar. But I became enamored of a method found on Paul Clarke's amazing site The Cocktail Chronicles . There he recommends just simply shaking the sugar and pomegranate juice until the sugar has dissolved. The juice has a fresh, clean taste, that is less syrupy. It really appealed to me.

All that was left was to belly up to counter and figure out the whole liquor situation. The options are many. Gin, Whiskey, Cognac, and Rum are all considered fair game in the concotion. I decided to do the fair thing, and spend an evening tasting each one. Gin will produce an almost effervescent drink (it's the one that is so beautifully featured above), one that's cute and almost embarrassingly pink. Its flavor is clean and a tad simple. When you skip over to the brown liquors, especially Rye Whiskey, something special happens. Each sip awakens your tongue, and smacks some sense into you. It'll still look a tad effeminite in the glass, but one sip is enough to convince you otherwise. It's a brilliant drink no matter what you happen to call the thing. 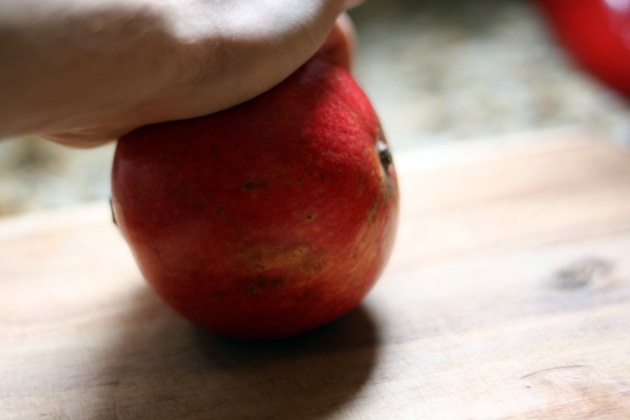 Press firmly down on the pomegranate with the palm of your hand and roll it around until it is soft. Make a small slit with a knife along one side. 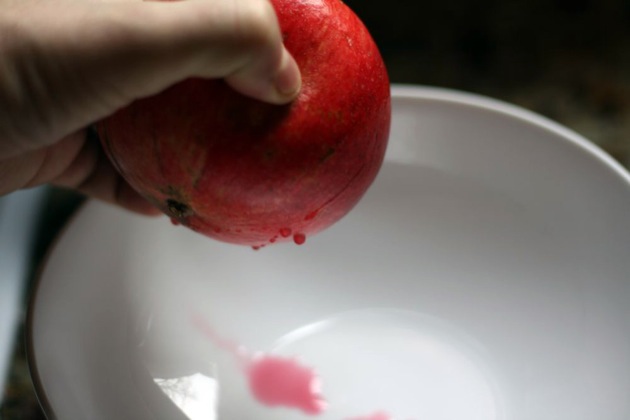 Squeeze as much juice out as you can. It will have about 2 ounces of juice.

Pour the juice into a jar and add an equal amount sugar, which should be about 1/4 cup. Secure the lid on the jar and shake until the sugar dissolves. That's it. 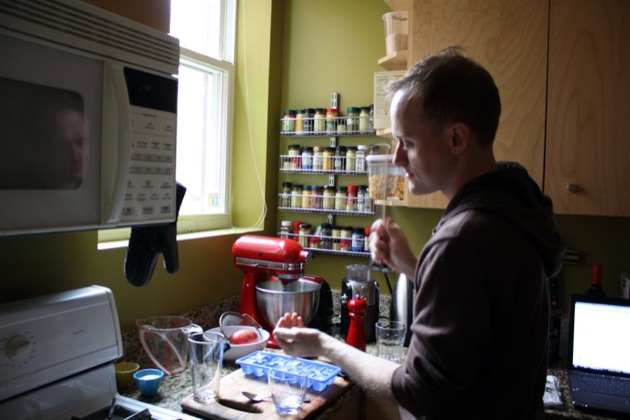 I decided to go with cracked ice for the drink. You can simply place a few cubes of ice into a clean towel and beat the hell out of it with a frying pan. But I was reminded of this slightly quieter trick from the last time I was at the Violet Hour. I learned this from LeNell Smothers, when I used to work at her liquor store. It takes a bit more time, but you crack each ice cube by hand with a muddler. Just place the ice cube in your (clean) left hand and smack it until breaks into dozens of tiny chards.. It hurts like hell at first, and many wacks don't do anything. But once you've properly cracked some of the ice, it turns into a strangely masochistic activity. After a while you'll get so good at it that it no longer hurts. But that takes a while. And maybe it's just all the liquor you've drunk that starts to relieve the pan in your hand. Anyway, you can't argue with the results. 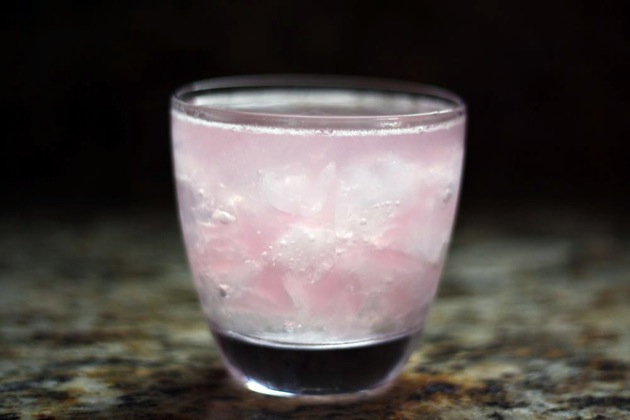 Pour the whiskey, lemon juice, grenadine, and simply syrup into a shaker. Add enough ice to come 3/4 of the way up the sides. Shake for 10 seconds. Strain into a glass filled with cracked ice. Top with a bit of club soda.