In Search of the Cheapest Sous-Vide Steak

How to transform cheap meat. 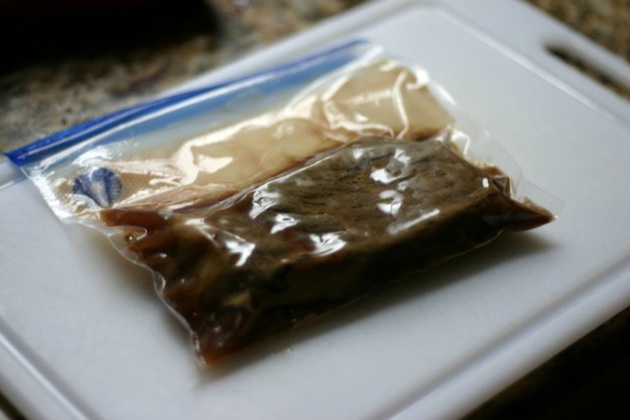 After my experiments with sous-vide chicken resulted in one of the finest birds I'd ever eaten, I immediately set off on a crusade to transform the cheapest cut of beef I could find into filet mignon. I know this sounds an awful lot like alchemy - that ancient (and ludicrous) practice of transforming humble metals into gold. But with the above quote ringing in my head, my mind started to race with the possibilities. Instead of starting with chuck, I decided to start with the least tender cut I could find. So chuck became round. This, my friends, is what is called "Nick getting ahead of himself."

I should have taken a step back and assessed my situation. The recipe clearly calls for chuck, which is relatively fatty. But I wanted to test the absolute limits of the machine. So that's how I found myself buying two and half pounds of top round from Whole Foods. It's about the leanest and least flavorful cuts of beef on the cow. It doesn't even make a good stew. The only way with round is to cook it until rare and then slice it as thinly as possible. That'll leave you with good roast beef, or a great Italian beef if you're smart, but what if you didn't have to slice it thinly, and could instead dig in with absolute abandon? 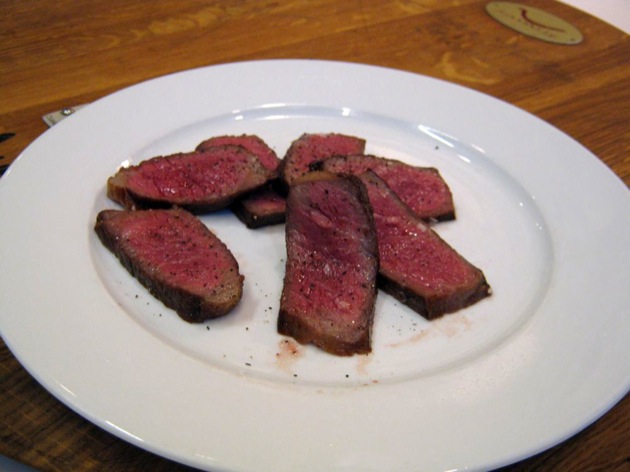 I have been lusting after steak since I attended the SousVide Supreme event a little over a month ago. There I ate a rib-eye which was cooked until rare in the machine, and then seared in a skillet to give it that beautiful crust. As  you can see from the picture, it was perfectly rare from center to almost the edge. It was succulent and tender in a way I always wanted steak to be.

I knew that round would never get me there, but how close could I come? Any connective tissue should dissolve after so long in the machine. That should me leave with tender, if a tad dry, meat. Without much proof beyond the quoted line from Douglas Baldwin's A Practical Guide to Sous-Vide cooking, I decided to experiment for myself. I chopped the top round into four 1 1/2 inch thick steaks, sealed them up in plastic, and placed them in the SousVide Supreme at 133 degrees and walked away. 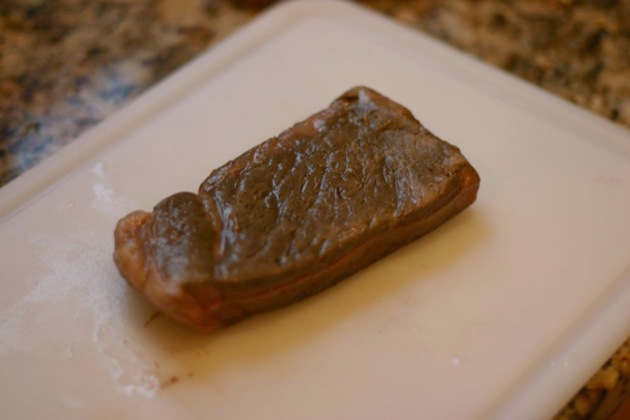 After 8 hours, I pulled out the first sample. The meat looks atrocious on the outside, all gray and spongy, which wasn't that far off to how the chicken looked after I pulled it out. I seared the steak on a skillet with a lot of butter to give it a good crust, and then seasoned it with salt and pepper. 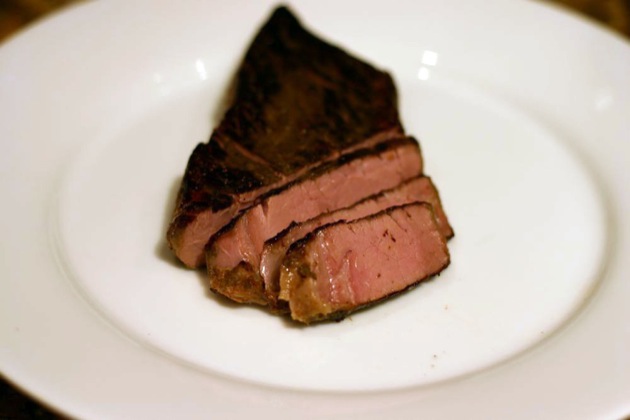 It came out looking rather nice, actually. I was astonished about how easy it was to cut, but the flavor and texture were not there. It was still chewy and still tasted more like a good roast beef than a fine filet. I realized it needed a lot more time. 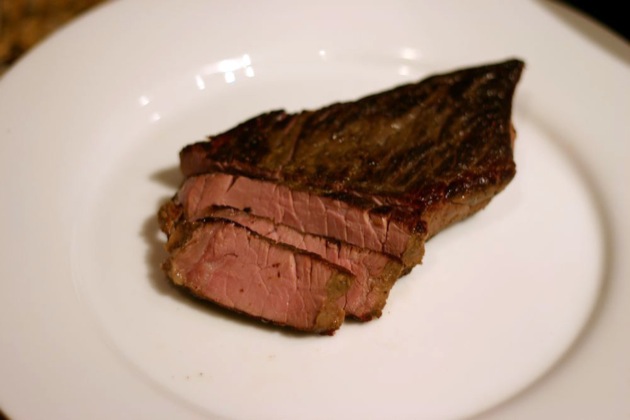 I waited 24 hours before checking again, and my wait was rewarded. It was as tender as any steak I'd had eaten before. 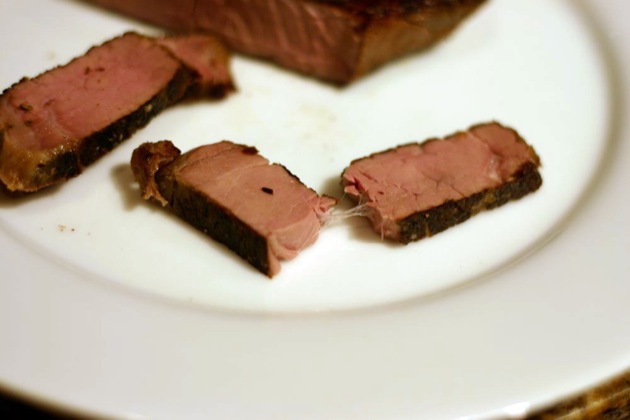 It was so tender I could actually pull the meat apart with my fingers. Obviously any connective tissue had been dispensed with. But it was still missing something. The meat wasn't succulent, or at least most of it wasn't. That's when I realized that the piece of meat probably would never get where I wanted because it didn't have enough fat. There was just bit of fat running along one end of the steak, and that actually tasted like a sirloin. 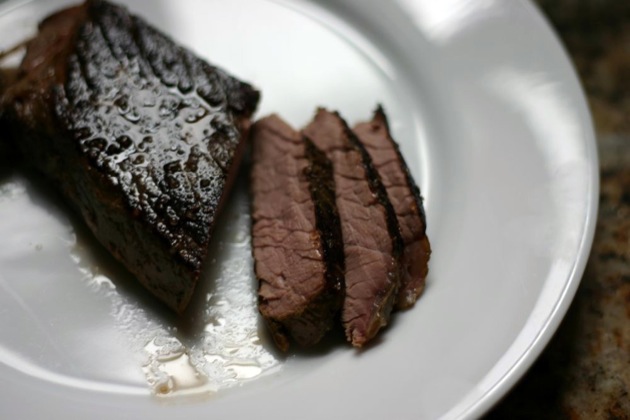 The steak I checked after 36 hours tasted much same as the one above. 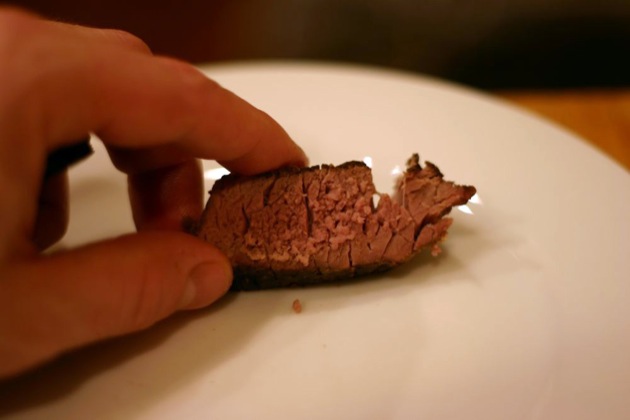 After 48 hours the steak started to pull like stewed meat, even though it was still completely medium rare. It was tender, but had lost all of its steak-like qualities. I admited defeat. End of the project.

What did I learn? Well, like I explained above, the author actually does call for chuck steak, which is much fattier than round. In my excitement, I tried to go beyond the limits of this new cooking device. I wish I had more time to play around, but my demo unit is already packed up. I'm thinking about just buying one. It's a little sad, but it was worth the effort. The round did taste about as good as round could possibly taste, and I used it well in salads and such. But it was never going to be a steak. 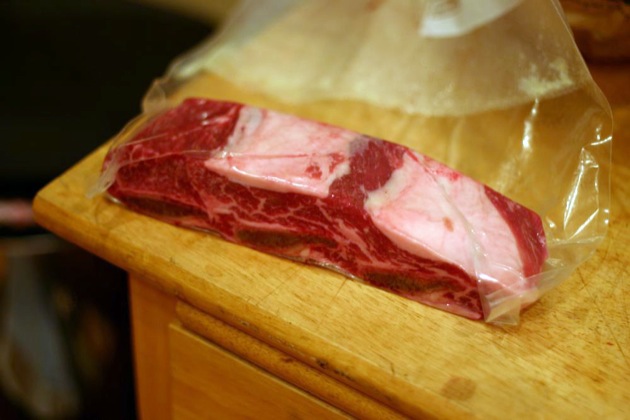 You know what does make a great cheap steak? Short ribs. Read this incredible quote by Michael Ruhlman :

With sous-vide though, you can cook short ribs at temperatures well below the point at which red meat becomes gray if you cook it long enough for the collagen to melt (133 degrees F/56 C for 72 hours for example). The result: rare short ribs that are meltingly tender. 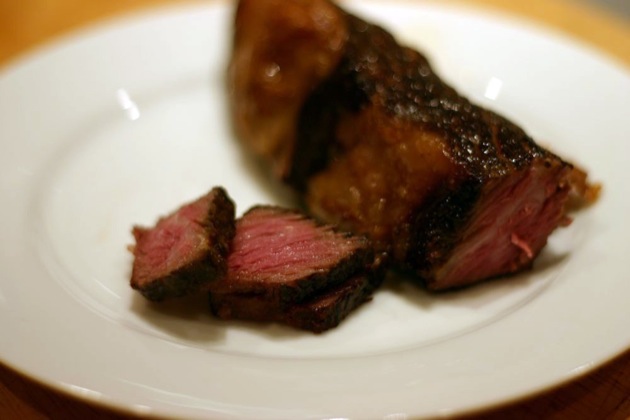 And that's, indeed, what I found. Incredibly tender short ribs that were rare and succulent. Other cuts only wish they had this much fat. They were easily some of the best short ribs I'd ever eaten, which is saying a lot. Short ribs always tend to be delicious, but never before have I had them like this. They were still rare inside, but could easily be cut with a knife. Not exactly water into wine (or, for that matter, round into filet mignon), but stunningly delicious nonetheless.