Oi-Sobagi: Cucumber Kimchi and the Purpose of Banchan 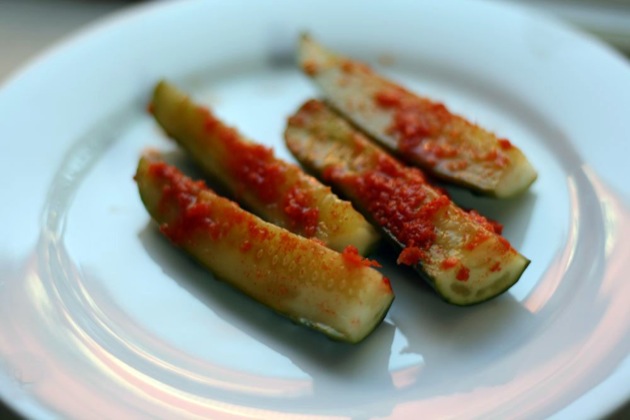 I began to wonder whether the banchan were going to overwhelm the table. We had placed the little Korean side dishes on the smallest plates I owned, but the shear number of them added up. It was our own fault. When Blake and I decided to do a Korean Barbecue feast last weekend we figured it was time to lavish attention on banchan, giving them the attention and care usually just reserved for the main course. Along the way we made some excellent scallion pancakes , a crisp radish salad , and a rich potato salad dressed with soy sauce. We also had the ubiquitous cabbage kimchi, which I always keep well stocked in my fridge. And, almost as an afterthought, we added a little container of cucumber kimchi, also called oi-sobagi , which I had scooped up off a salad bar at the local Korean grocery store.

Though I ate numerous things that night including my own recipe for galbi and those amazing scallion pancakes , the one thing I remember most vividly were those cucumbers. They seemed to sum up what's so great about Korean Barbecue. It's the simple fact that you can pig out on meat and all these sides, and then leave the table feeling kind of nice and pleasant. The side dishes help balance the fatty meat, but they also do more than that. I remember clutching a piece of the oi-sobagi awkwardly between my chopsticks and realizing something very important. This little guy makes the fatty and hedonistic meat taste better .

The dish, from what I could tell, was basically just cucumbers stuffed with a paste of spicy Korean red pepper, garlic, scallion, and ginger, that was left to pickle slightly. It sounded simple, but I was completely taken aback by the light, cooling crunch, the bright shot of spice on my tongue, and the tickling bubbles that awakened my palate. After the feast was over, and all the little plates cleaned, I immediately set out to see if I could make these guys at home, and whether they would make everything I ate better. 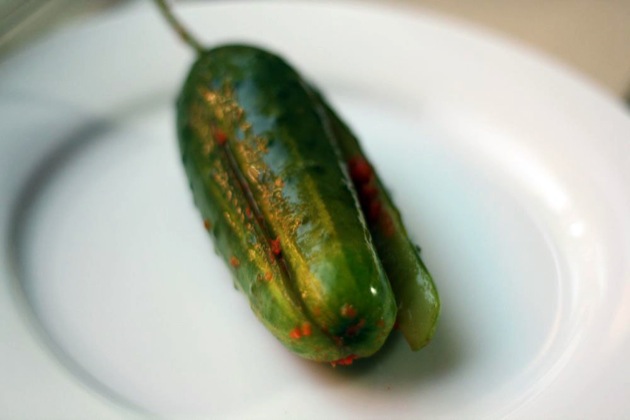 They are essentially just pickles. My last attempt at that dish was over a year ago when I attempted dill pickles . They were delicious and crisp, and some of the best pickles I've ever eaten, but the three week maturing process has kept me from returning to them. I never seem to plan that far ahead, especially when there are so many great pickle companies in Chicago.

What surprised me most about the recipes I found for oi-sobagi was that many credible sources claimed they could be made relatively quickly. They just need two days in a cool, dark place. That's more like it.

I was still worried. I feared total failure, and so peaked in after one day to see how things were getting on. To my great distress they were sour, watery, and dull, about as far away from what I wanted as possible. But something magically happened on day two. The ones I pulled out were laced with bubbles and fierce with chili. I stuck them immediately in the fridge, and once cold they were perfectly crisp. I was amazed. It was really easy. 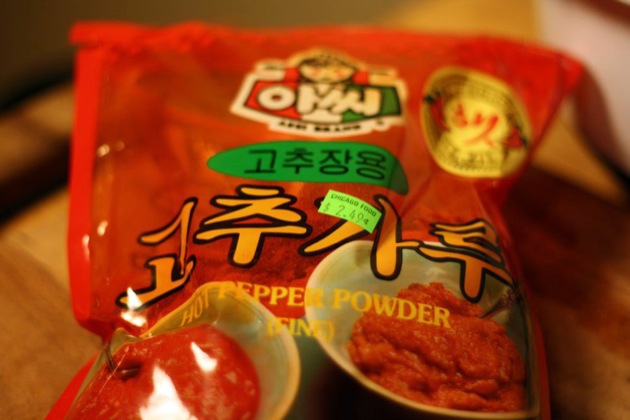 About the only thing that may be hard to find in a regular grocery store is the Korean red pepper powder. It will probably only be available in Korean markets. You could probably substitute cayenne pepper, but cayenne is a lot spicier, so adjust the amount below.

For help I consulted a wide arrange of sources from Chow , Epicurious , Off the Broiler , and Lily's Wai Sek Hong .

I know it may seem a little naive, but I'm still astonished by pickling and how it can transform something as ordinary as a cucumber into something like oi-sobagi. It's a dish that enhances the taste of everything around it, and is a recipe for those that want to start pickling on their own. It's definitely one I will be returning to soon. 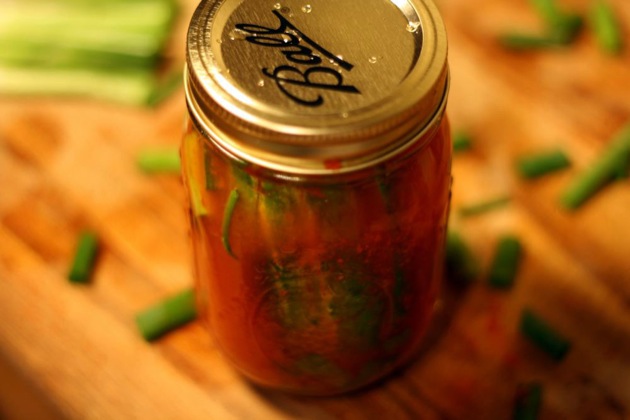 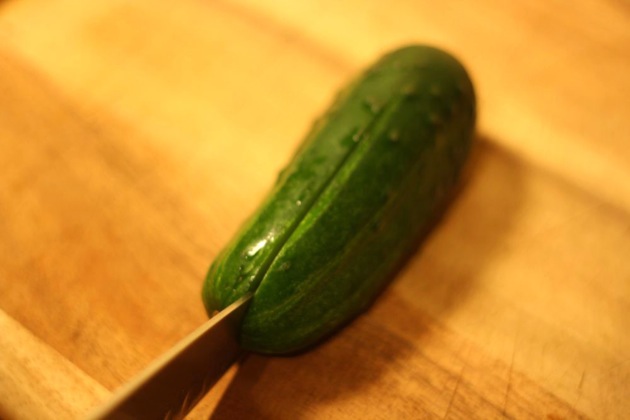 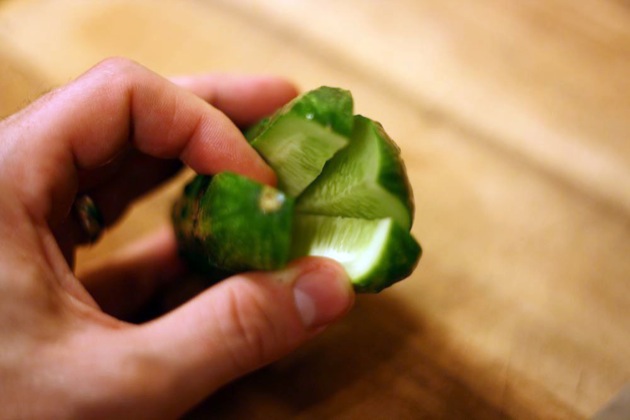 In the end, you'll have four spears of cucumbers still connected at the base. Repeat with the other cucumbers. 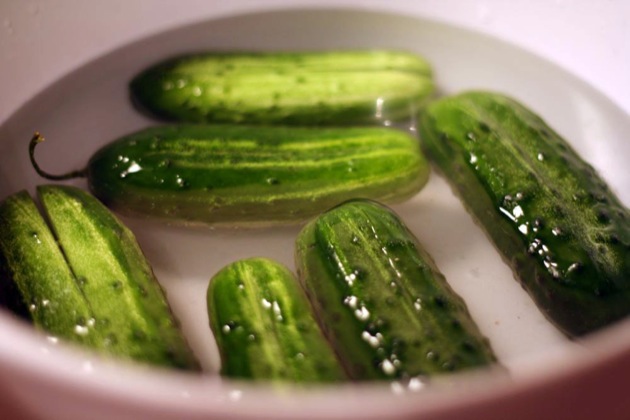 Pour 3 tablespoons of the salt into a large bowl. Add a cup of warm water and whisk until the salt dissolves. Toss in the cucumbers. Add enough water to cover the cucumbers. Set aside for thirty minutes. 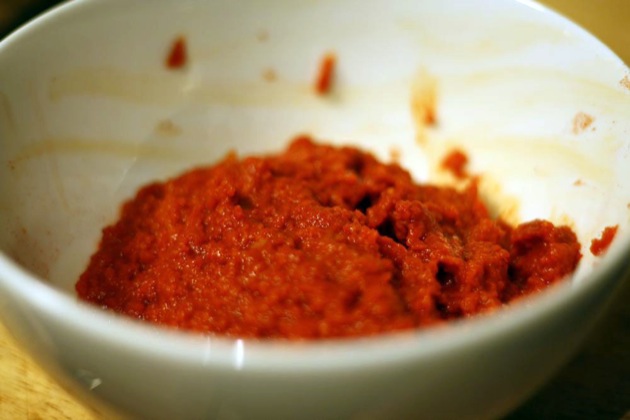 Meanwhile, place the garlic, onion, and ginger into a blender. Pour in a little water, like a couple tablespoons or so, and puree until it is a paste. If it's too thick just add a little more water. Transfer to a bowl.

Add the rest of the salt, red chili powder, and sugar. Stir well. Add the green onions and then set aside for 20 minutes.

When the cucumbers are done, pour out the salty water and rinse them under cold water. 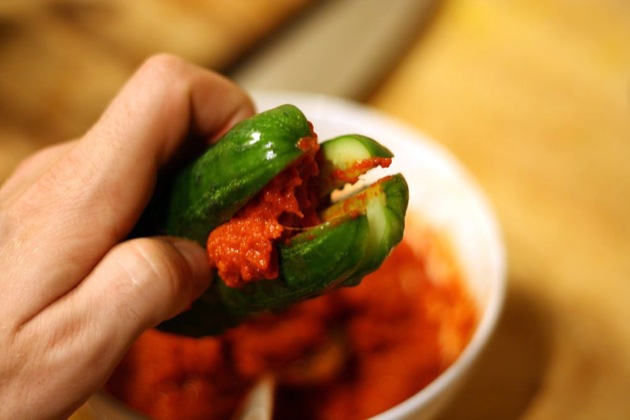 Spoon some of the paste into the cucumbers. They break easily, so be careful. 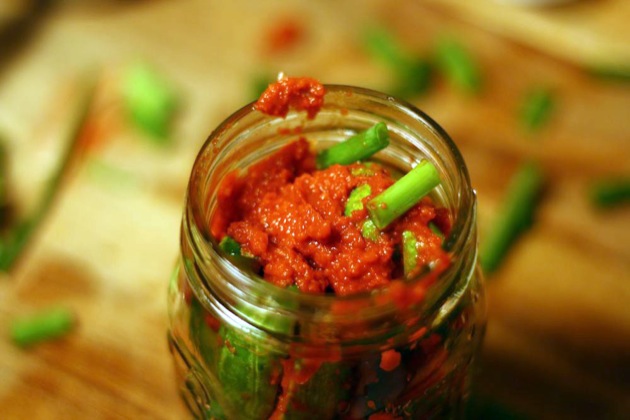 Then place them in jars (I had to use three small Ball jars), spoon in any leftover paste and green onion, and then cover with water.

Place in a cool dark place for 48 hours. Transfer to a fridge. Eat when cool and crisp.