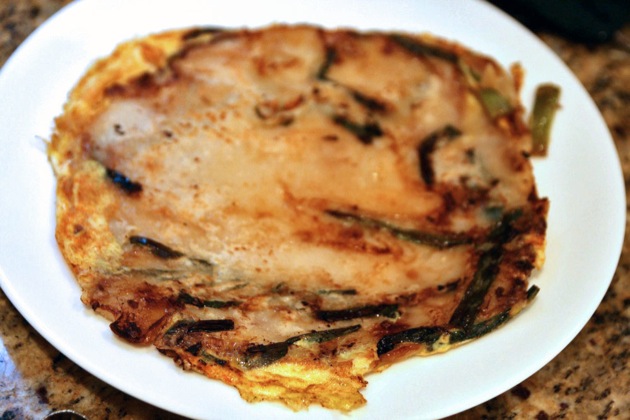 I recently experienced Korean Barbecue for the first time, and I'm not sure I'll ever be quite the same. For days afterwards, I could taste the spicy, sweet, marinated short ribs between my teeth. The heady scent of kimchi haunted me; I'd walk around corners and swear I could smell it. Korean barbecue is soul food. It's comforting, the flavors are deep, and it's all based around communal eating.

The concept of Korean barbecue is a large cooking vessel in the center of the table, sort of like a grill, which is covered in different meats and vegetables that have been marinating in various things. As the meat finishing cooking, it is fished from the grill with greedy chopsticks and consumed, sometimes wrapped in crunchy lettuce, sometimes in thin sheets of pressed rice.

After my meal with an old friend who spent a year living in Korea -- he took us to a spot in LA that had "the best marinade" in his knowledgeable opinion -- I've been scheming with Nick about how we could recreate some of the experience in our home kitchens.

Nick's a little more experienced when it comes to Korean barbecue, having already explored the marinated short ribs (also known as Galbi ), and tended to a fierce kimchi obsession for a couple years now. But we're both newly and equally fascinated with the rest of what makes Korean barbecue special, besides the meat: the side dishes .

Known as Banchan (or Panchan) , these are sundry little tastes and bites that complement the meat in Korean barbecue. The banchan are as important as the meat itself: they cut the richness and round out the meal so you don't finish feeling full of meat and sick, but rather satisfied and suprisingly light.

The most well-known banchan is simple cabbage kimchi, which inevitably comes out at every restaurant (most restaurants will simply serve the banchan they're best at making). But there are many other things, dishes based on egg, other kinds of fermented vegetables, thinly sliced radishes to clean the palate, crunchy lettuces, sticky-sweet potatoes. The options are endless.

Pajeon is a common panchan, a simple egg-and-flour pancake served with a wonderful dipping sauce. The traditional ingredient is scallion, though lots of other vegetables will make their way into recipes such as zucchini or even seafood.

The simple solution was our goal. We didn't want to load our first pajeon down with lots of extraneous stuff. We wanted the texture and flavor to be just right: crisp on the outside especially along the edges, soft and slightly gummy in the center.

Even without the barbecue part, this thing is filling all on its own, a satisfying, simple meal unto itself. 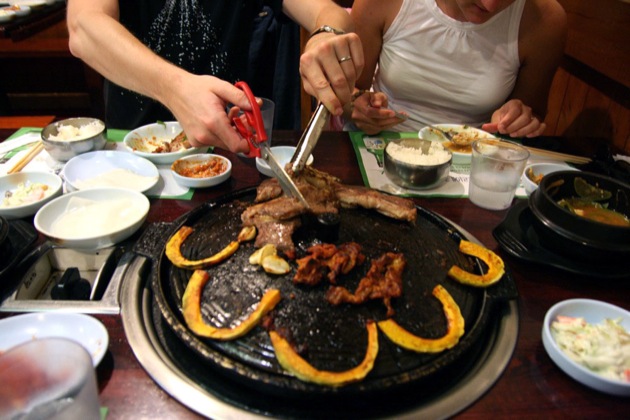 The recipes comes from David Lebovitz and Trifood.com.  The pancake recipe is interesting in that the flour portion of the dough is kept separate from the egg. The method allows you to make sure the floury taste is totally cooked out, and the egg gets especially crisp, which allows you to perfect both the texture and the outside.

But the dipping sauce might be the real story here. Heady, deep, and wonderful. Our best advice is to seek out good Korean soy sauce for this one, which makes Kikkoman taste like Miller light to a Belgian beer maker.

Adapted from David Lebovitz and Trifood.com

Ingredients
For the pancake

For the dipping sauce

The first step is to soften up the scallions in a little neutral oil, which sweetens them up. Canola or vegetable oil, rather than olive oil, is the best choice. In the meantime, combine the flour, salt, and water in a bowl and whisk them together thoroughly. 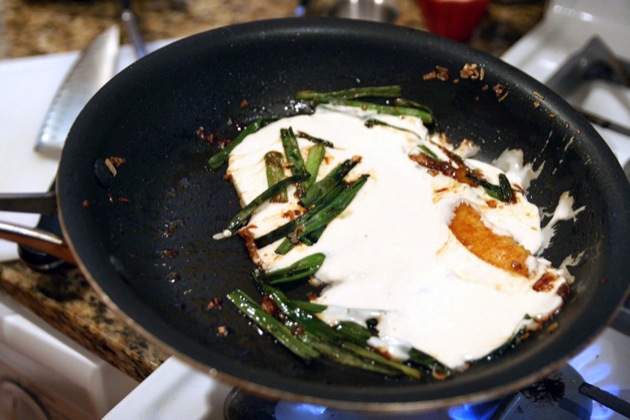 Shake the pan around to distribute it, and continue cooking over medium-high heat. The batter will slightly brown on the bottom and begin to set. 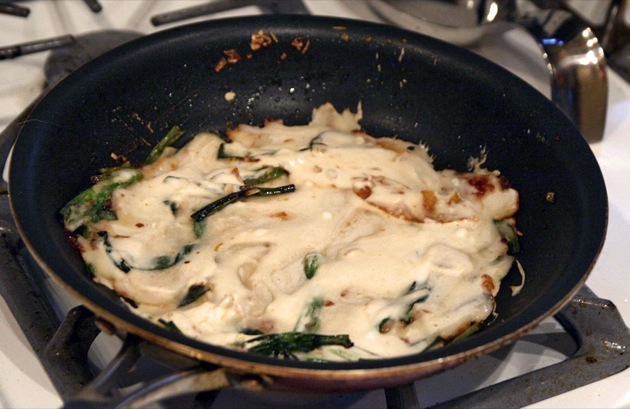 At this point, add the beaten egg and tilt the pan every which way to spread it out, and top with the korean red pepper, in our case, powder form. We kept spreading the egg out, lifting the edges of the pancake like an omelette to let egg run past the edges. 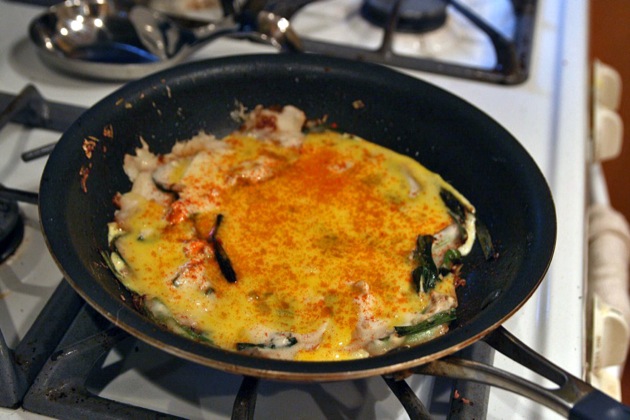 Once the egg is nicely spread out, flip the pancake. Easier said than done -- best thing to do is loosen it fully with a wide spatula until you know no part of the underside is going to stick. It should slide around easily as you shake the pan. 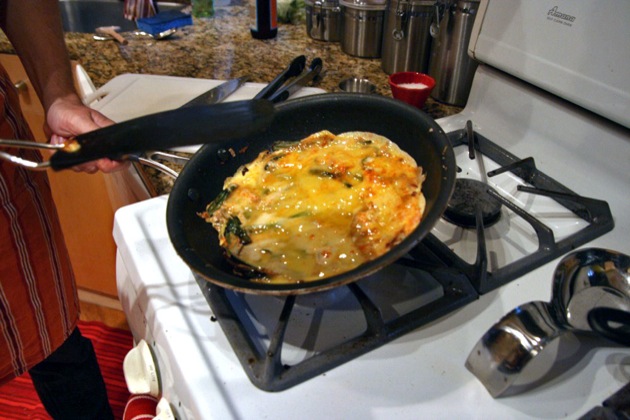 Then, go with a big flip motion, guiding it with a spatula as needed. 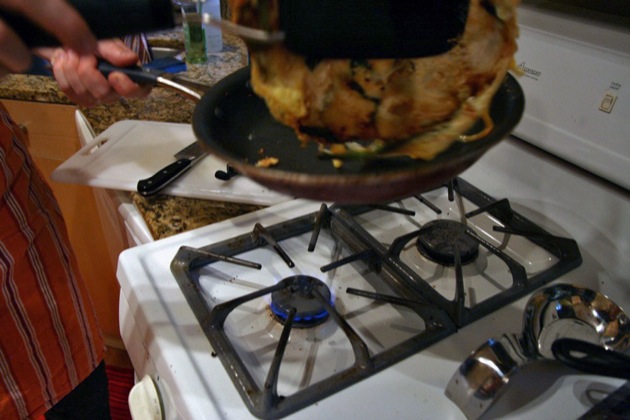 (You can also put an inverted dinner plate over the pan, turn the skillet over onto the plate (the cooked side of the pancake will be facing up, sitting on the plate), then slide it off the plate back into the pan.)

Cook for an additional couple minutes until the egg is crisp. 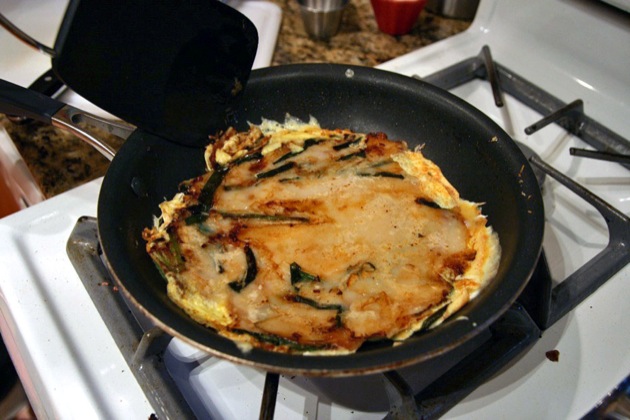 It tastes best at room temperature, so this can easily be made ahead of time. Serve with the ingredients for the dipping sauce whisked together.