The best kind of wedding appetizers. 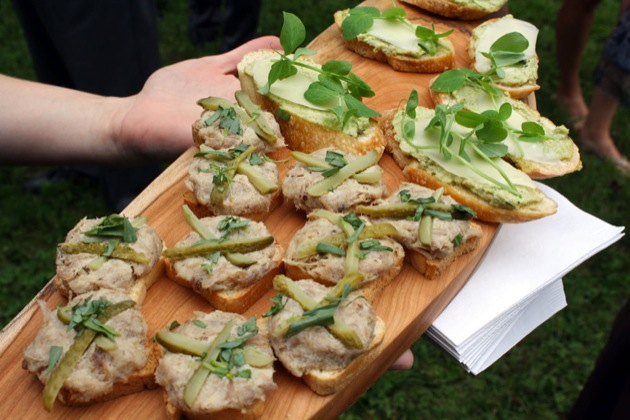 A pure expression of the pig: nothing extraneous, nothing wasted.  Pork, salt, and a little bit of time: that's all you need to make rillettes.  It was a beautiful idea which had led me to the kitchen, where I had 25 pounds of pork (a ball of lard, huge hunks of shoulder, and a bag of spare ribs larger than a medium-sized dog) and where I realized I was in over my head.

C onfiture de cochon --"pig jam"--is what the French affectionately call rillettes, and I was making it so I could serve it as one of the hors d'ouvres at my wedding. I wanted people to eat something personal, something I had been involved in, a way of sharing in the huge production of feeding all the friends and loved ones. I couldn't help but think of our wedding as the biggest dinner party we'd ever hosted, and though we happily hired an amazing caterer, this was a way I could extend my role as host a little further.

The "pig jam" would be on little toasts, topped with briney cornichon pickles to cut the richness. Other than that, it was just meat, fat, and a little salt to carry all the flavors to the tongue.  Rillettes are simple, delicious, made from cheap cuts.  They're pretty easy to make and hard to mess up, while also quite impressive.

When I began to search for recipes, I found lots of them. Awhile back I made duck rillettes and posted about it , and I absolutely adored the result. Duck rillettes were easy: just make duck confit and shred the meat with a little of the poaching duck fat. For that project I'd bought duck fat and duck legs separately, so it was little more than combining them along with spices to make it final.

This time my one rule was make the rillettes from absolute scratch: no buying pre-rendered lard. But I couldn't figure out which recipe to use that I knew I could trust. I was about to spend over a hundred dollars on ingredients and serve it to lots and lots of people who would proceed to think more or less of me, depending on how it turned out. So there was no way this could be messed up.

My favorite food magazine The Art of Eating piled up while I was living in Estonia, and a recent issue titled "American Charcuterie: The Cooked" came to the rescue. There was a recipe for "Rillettes de Tours," which I learned are made in a different style than the paler, finer texture one finds in recipes from Le Mans. These rillettes are coarser, more browned, and cooked more quickly. The Art of Eating pays such incredible attention to detail, and prizes authenticity so lovingly, that I knew the recipe could be trusted.

Of course, when my pork arrived from a local Indiana farmer, humanely raised heritage breed (considering that pork was the only ingredient with no spices to mask its flavor, I knew that it had to be of the highest quality), things changed quickly. Rather than receiving the precise amounts of pork fat, spareribs, and lean shoulder that I asked for, I had different quantities of everything--far more ribs that I'd ordered, and shoulder that wasn't lean but had loads of fat under the skin.

I started to freak out and wonder what would happen. My head was swimming with calculations as I tried to multiply the recipe by 6 times to feed so many people, and now I had to adjust again.

Yet as I was slicing the meat into chunks and preparing for cooking, I realized that this was precisely the way things should be. This is what was available when I ordered. On a French farm somewhere, this is probably just how it goes: you work with the meat that's available once the pig is slaughtered and the expensive bits are sold to the city folk.  Rillettes are all about cheap cuts becoming something special, something to be stored for a long time, and the recipe responds to what's available. If the overall ratio is 2/3 lean to 1/3 fat, then the result will be just fine.  And turns out this is just what happened. 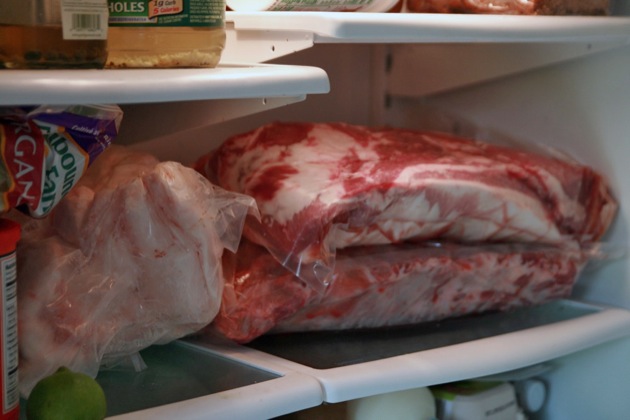 Adapted from The Art of Eating magazine, issue No. 80

The first step in making rillettes is the absolute hardest: lots and lots of dicing.  A sharp knife is an absolute must, or your hands will hurt for days from gripping the knife.  I began with a scale to keep a handle on the vast quantities I was making. 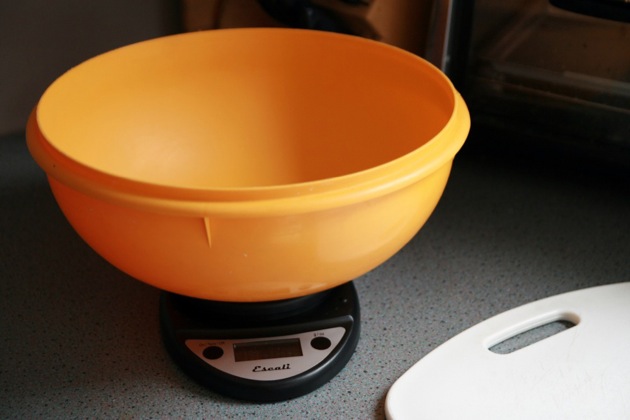 The lard I had was leaf lard or caul fat, I'm not certain.  It came in a giant ball, which untangled easily.  When working with lard, keep it as cold as possible.  Not only will it be less slippery, it's easier to cut and work with. The warmer the lard got, the harder to cut it into small pieces. 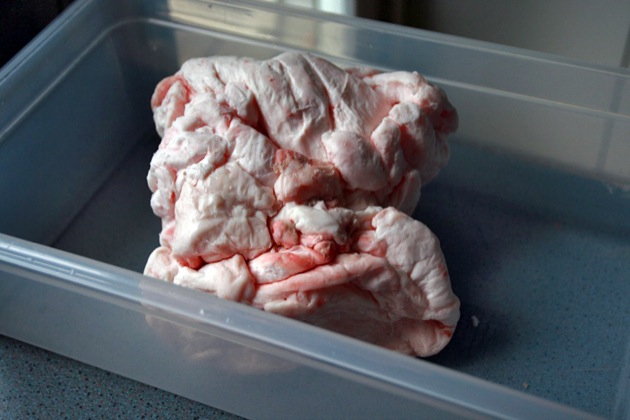 Throughout my hunk of lard was a translucent membrane that I removed.  It won't render with the rest of the lard. 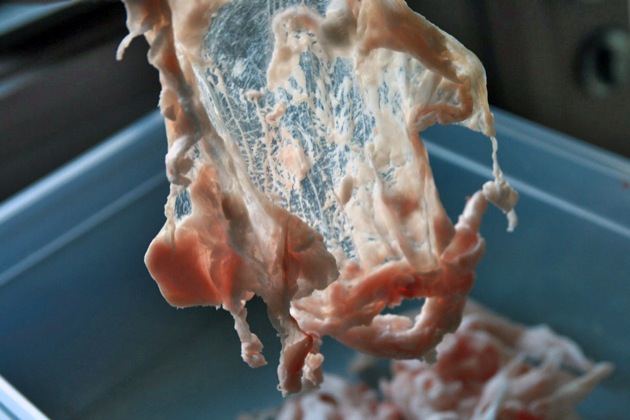 My spare ribs, thankfully, didn't need any dicing.  I rinsed them, cut them into a few large pieces small enough to fit in the pots, and set them aside. 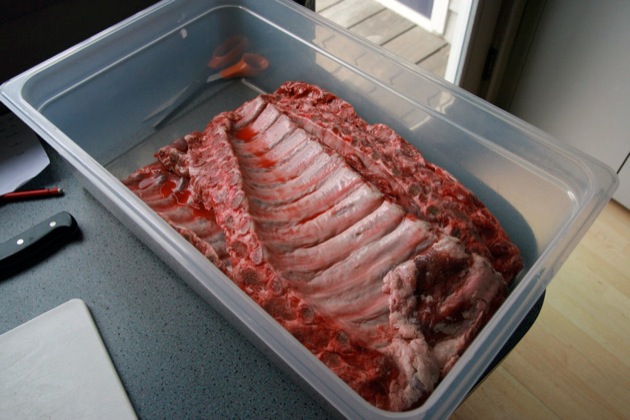 Finally, there was the shoulder. 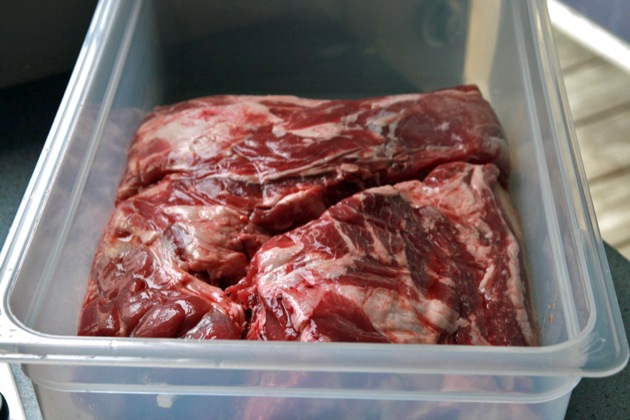 The shoulder was a nice mix of fat and lean. 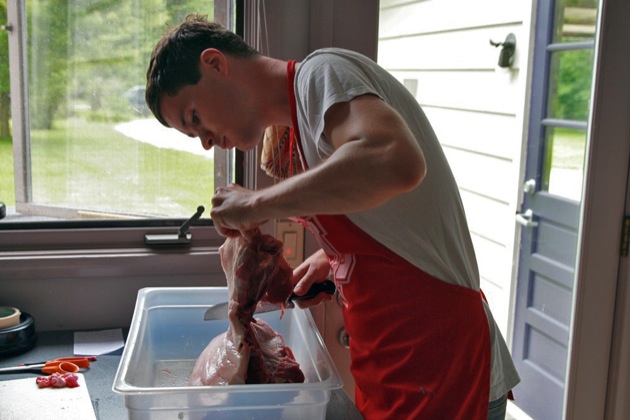 The shoulder piece was also still attached to the skin, with a huge layer of fat in between. 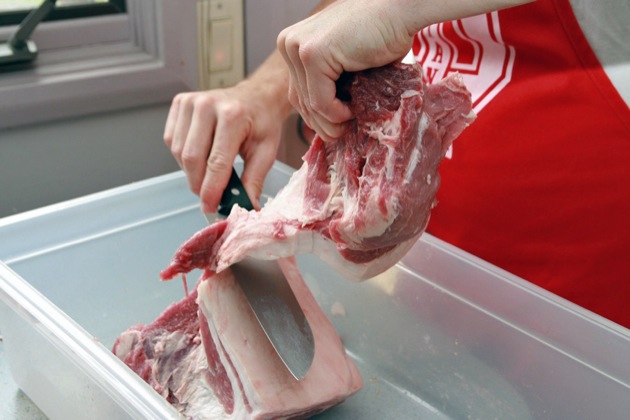 I removed this layer of fat and set is aside to render it separately.  This was useful later when I wanted to seal off the rillettes with fresh lard to ripen for a week. 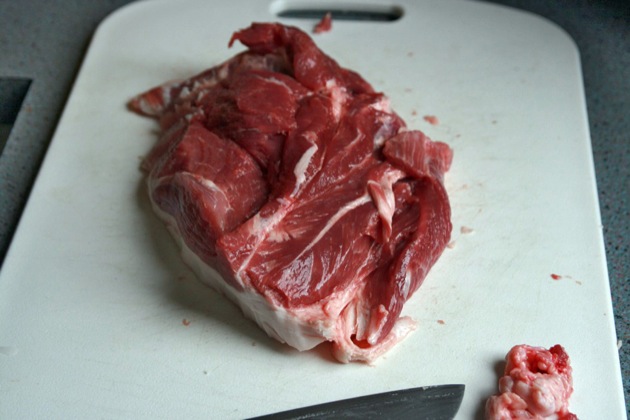 The pork was an absolutely stunning red color. Try finding supermarket pork meat that rich and red: you won't find it.

Once the membrane is removed from the lard, I cut it into 1/2 inch dice and place in a large pot (in my case, 3 large pots) with the water. 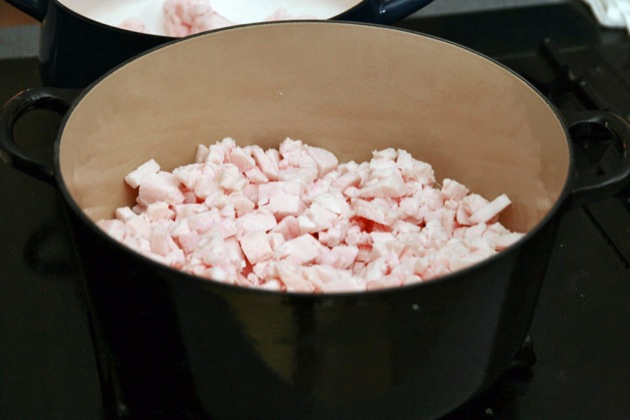 On top of the fat went the pieces of spare rib, and finally the shoulder, which should be roughly cut into 2-3 inch squares. 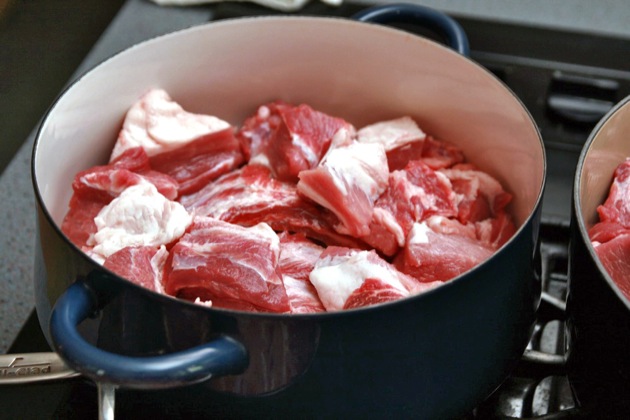 Next, the pot is covered and the heat it turned to medium-high until the water comes to a boil.  The idea here is to begin rendering all the fat at the bottom of the pot, which will become a base for the meat to poach in.  Water assists the process of melting the lard.  Keep an eye on the bottom to make sure nothing is sticking, adding a bit water as necessary.  (Don't add too much water: later on, the idea will be to get rid of as much moisture as possible.)  Just enough water to keep it from burning and the lard melting. 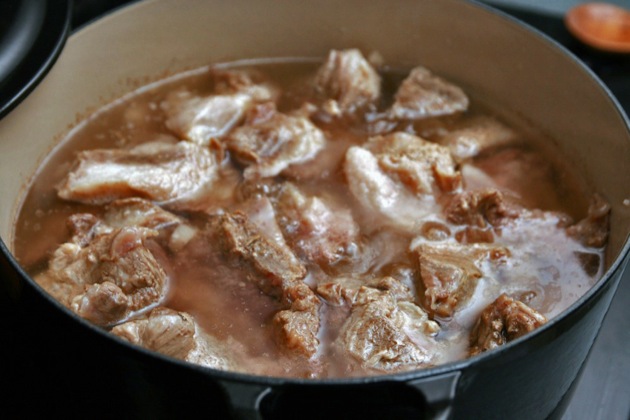 Eventually the fat will melt and the liquid level in the pot will increase.  Once an inch or so of fat has collected in the bottom of the pot, it's safe to leave it simmering, stirring only occassionally.  The pork should simmer for 2-3 hours as it fat-poaches and turns incredibly tender, and the pork bones release their stock-like goodness into the liquid.

After 2 or 3 hours, I started to check for doneness by removing a piece and crushing it on a cutting board to see if it broke apart. It took about  4 hours of cooking to get to the stage where the meat would shred quite easily.

Once it is sufficiently tender, the rib pieces should be removed and allowed to cool.

Once I could handle them, I removed the bones and any unsavory-looking gristly bits, then returned the good meat to the pot.

Now the rillettes are very close, but not done yet: the last stage is where a lot of the flavor is concentrated and deepened.  With the lid off, I turned the heat to medium and began to evaporate all the moisture in the pots.  The idea is to remove as much as possible, at which point the juices and the meat begin to brown, forming a glaze on the bottom of the pot.  This is regularly mixed back into the meat as the moisture continues to leave the rillettes and the meat shreds into small pieces. 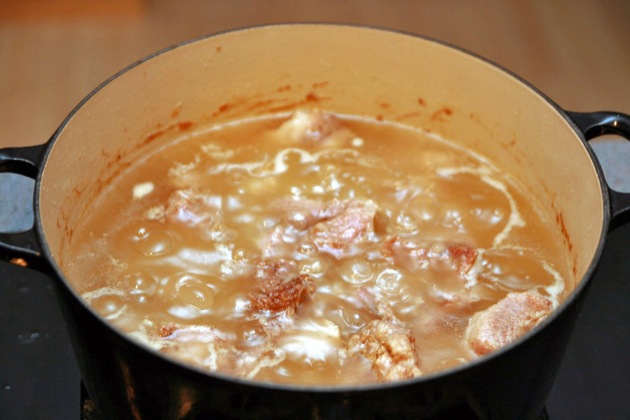 If the lard is still cloudy, moisture remains, so the process is not complete.

Throughout the process, I was stirring constantly to prevent burning.  It took close to an hour to fully remove all the moisture, as the rilettes deepened in color.  This might be quicker with higher heat, but I didn't want to burn anything.  Eventually, the rillettes should come together in a mass with just a little fat on the bottom of the pot. 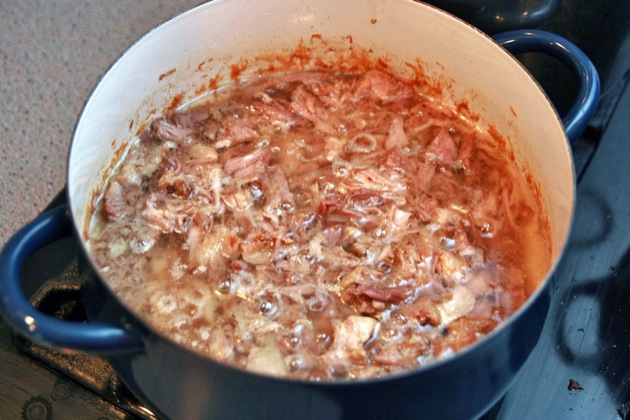 I realize at this point that there was far more lard than necessary in my batch, a result of the different cuts of meat I'd worked with.  So I was careful when transfering the rillettes to jards to leave as much lard behind as possible.

First, run the jars through a dishwasher to sterilize them, or wash with very hot soapy water and rinse with boiling water.

Make sure the jars are very hot before spooning the rillettes in to prevent the glass from cracking due to high temperature change.  Ramekins are also suitable containers, or a glass dish.  Anything that can be sterilized beforehand (avoid plastic), ceramic or glass. 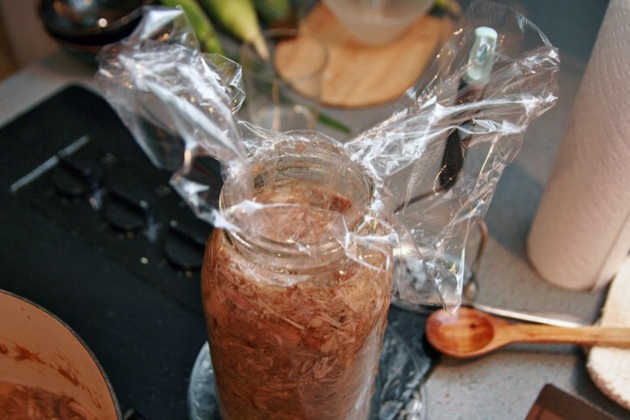 Next, the rillettes should cool and chill overnight.  Kept this way, they can be served within 5 days.  If you'd like to keep them longer, render fresh lard the following day and paint the chilled surface with burning hot fat to sterilize and seal it.  If you're certain they are completelely sealed with no air pockets, the rillettes can be kept for months refrigerated. 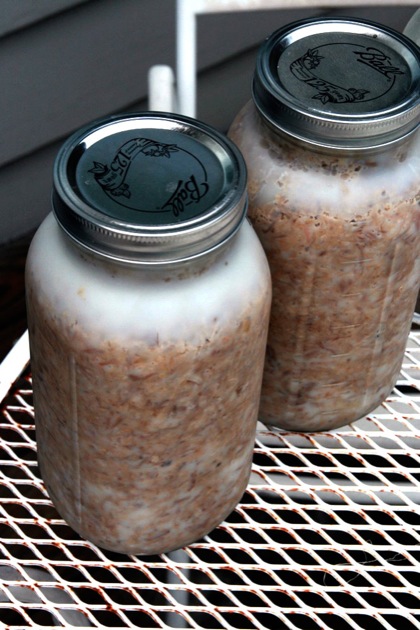 The rillettes should be eaten cool or just below room temperature.  The fat should just be beginning to run.