We take a walk around the legendary market. 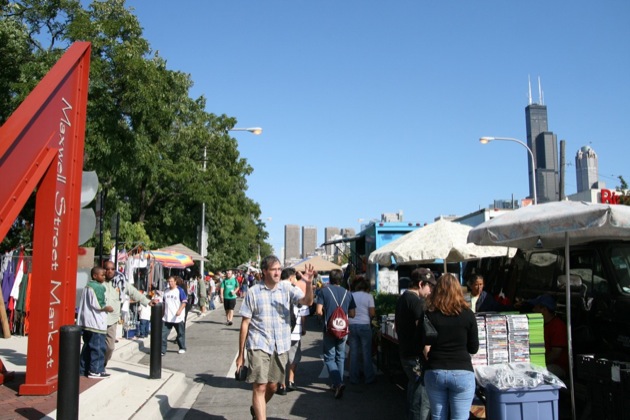 Nick and I arrived at the Maxwell Street Market to a line of colorful tents stretching out into the distance along Desplaines Street longer than we could see: men playing blues on the sidewalk, piles of tchotkes and used power tools, used DVDs, discount bras and panties, and endless stands full of tube socks. In fact, it wasn't immediately clear what we were doing there. If it weren't for the smell of cooking meat, we would have thought we'd landed in the wrong place. 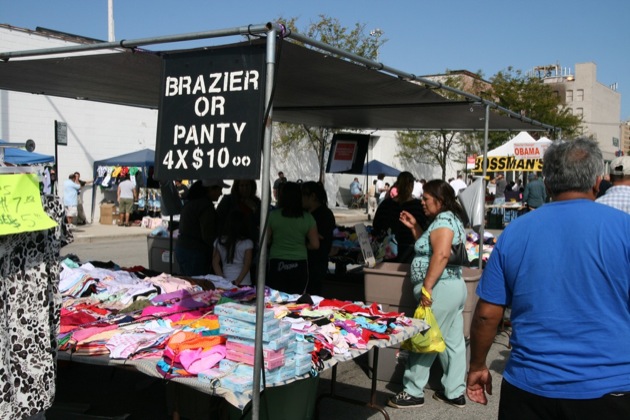 But buried amongst the random stalls was the promise of transcendent food, which was what had brought us to the little stretch of Chicago street next to the Dan Ryan Expressway south of the Loop.  It's what the market is perhaps most known for now, what brings a wide variety of visitors: its food stalls. Besides a selection of produce, mainly Latino (loose dried chilis were especially plentiful), there are dozens of vendors preparing authentic, delicious Mexican and some Central American cuisine.

At the corner of Roosevelt and Desplaines we met Daniel Zemans , Chicago Slice correspondent, who had also skipped breakfast to save room for what was to come.  As we hungrily walked the length of the market to survey our options, we eventually settled on 4 vendors selling the most interesting food. By the end of the morning we'd consumed more than half a dozen tacos, pupusas, quesadillas, enchiladas, and we were beat.

But it was our first stop of the day that was especially exciting: a vendor with a prominent turning spit of pork meat crowned with a large piece of pineapple. Indeed, we'd stumbled on a true, authentic Al Pastor spit , the way the meat is supposed to be prepared (very similarly to the Greek gyro), the pineapple juice dripping down and caramelizing to give the meat its distinct sweetness. 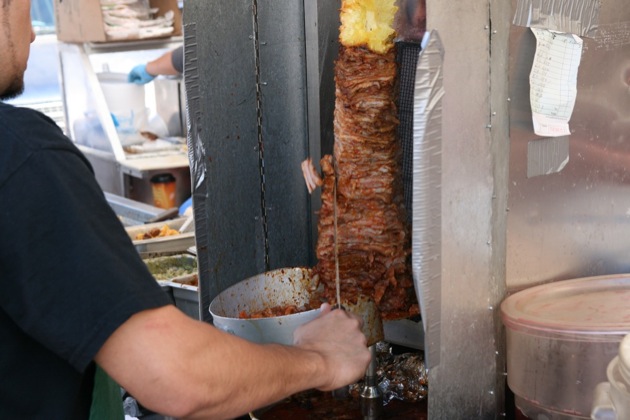 We knew it would be a good day. 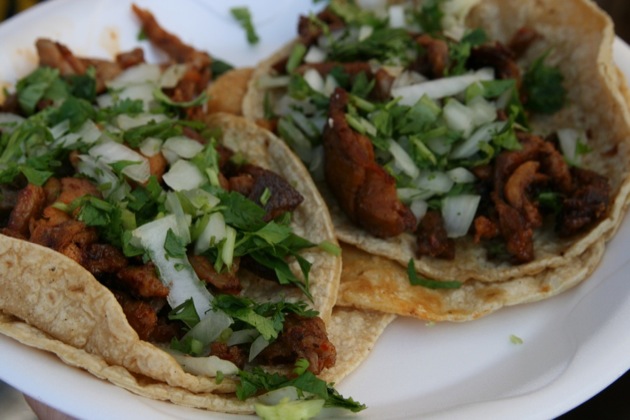 The meat was wonderful: moist yet crispy, with a deep marinade, and as Daniel remarked, definitely reminiscent of the sweetness from the pineapple. "You can really taste it," he said, and we all agreed. Though you'll often find "al pastor" tacos and tortas and such at tons of Mexican restaurants, it's rare to see it prepared properly on a spit. This was a real treat. 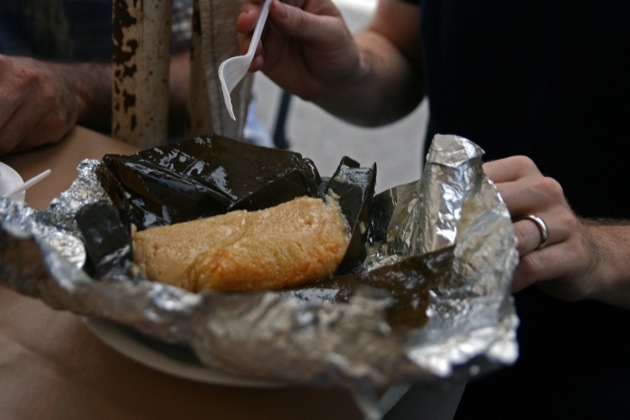 Our next stop was a Central American vendor selling pupusas, a little pancake of masa that's filled with your choice of innards (we went with beans), and tamales, which are wrapped in banana leaf rather than the more common corn husks, which is the traditional way they do it in Central American countries. 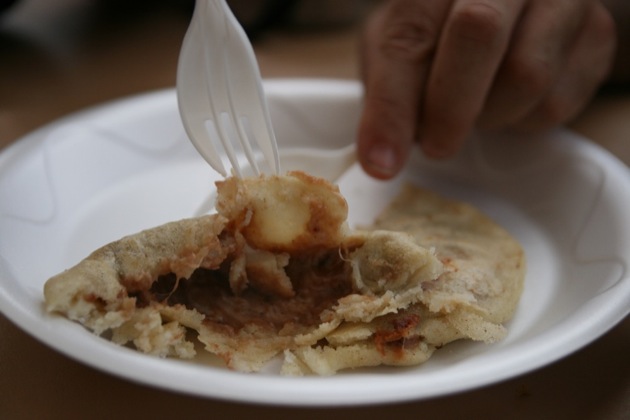 The pupusa was top-notch, filled with mild, creamy refried beans. 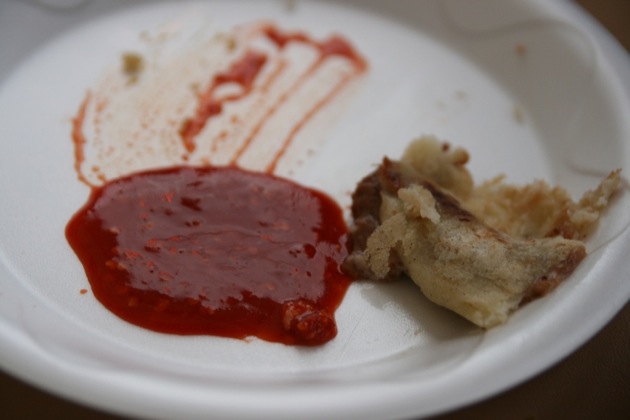 On the table was a gorgeous, bright red salsa which was perfect with the pupusa.

We immediately noticed a difference in the tamale in that the dough was especially wet--perhaps the banana leaf is less porous that corn husks, so more moisture is kept in. It was the texture of soft polenta, and the corn flavor of the masa was very prominent. 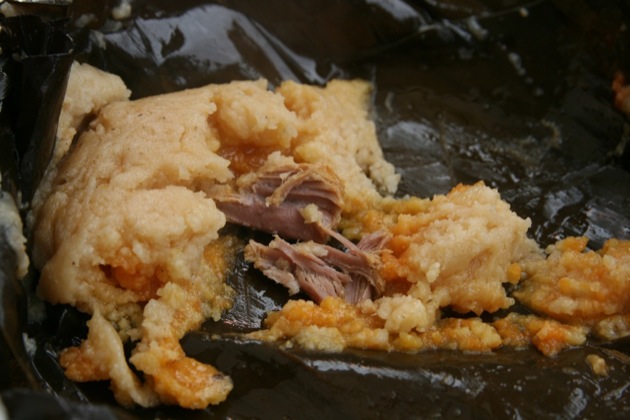 It was filled with delicious pork and some kind of reddish-orange sauce we tried but failed to define. Interestingly, there was also a whole olive in the tamale--no idea where that tradition comes from.

Next, we stopped off at a vendor that we'd been looking for all along: the place that sells "tacos de ojo," or tacos filled with goat eyes. Having never eaten an eye before, we attempted to order one, but were informed that they'd run out. Instead we tried to order a brain taco, but again, they said to "come earlier." The funkiest taco they had left was made from beef cheek, so we ordered one of those plus two tacos filled with pork meat that they had stewing in a large, round basin. 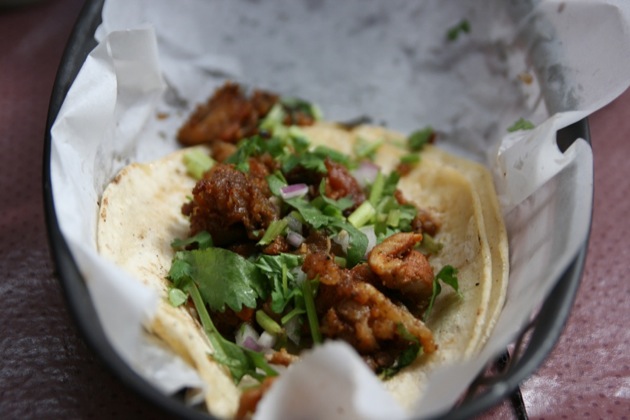 The pork was probably the best we'd had all day: the flavor of the marinade was superior, and the texture was fried and crisp. They also had some kind of crazy red salsa that we were really bowled over by. 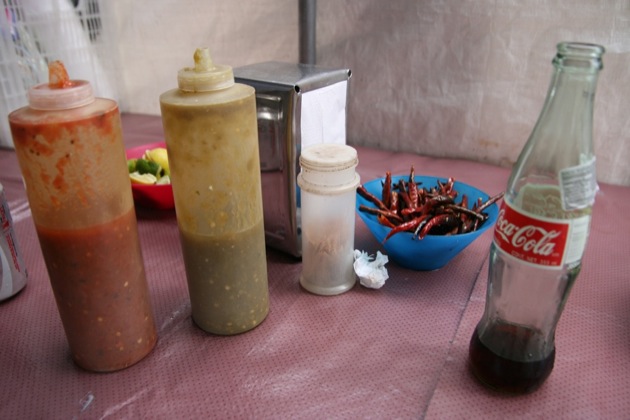 The cheek taco was also good, though probably upstaged by the pork. 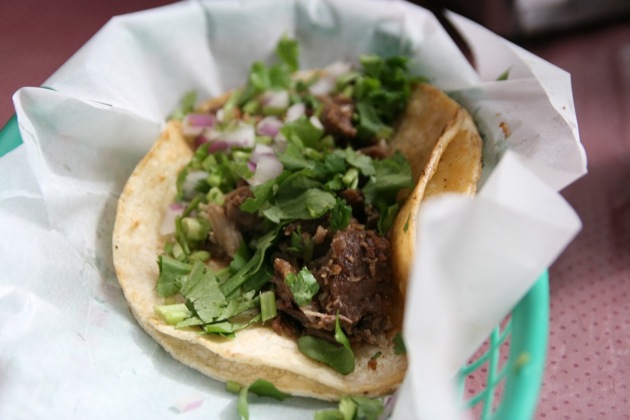 Our last stop was at the largest vendor we found; we were drawn in by a woman frying tortillas and dipping them in a bright red enchilada sauce. 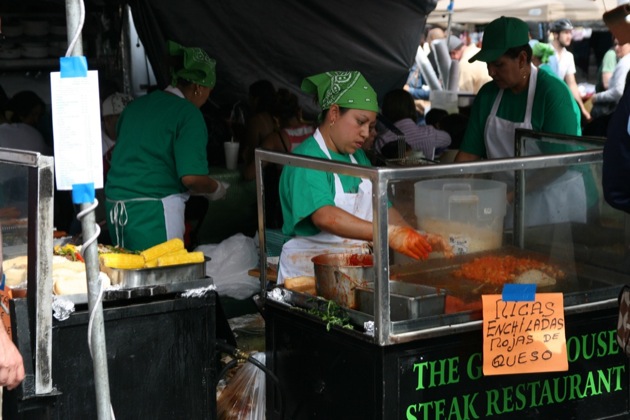 While Nick stood in line for an order of those, Daniel and I perused their other counter, where a huge selection of meats--chorizo with potato, barbaco, spicy beef, pork, etc.--could be ordered in whatever receptacle one wanted: tacos, burritos, quesadillas, and the intriguing "gordita", a sort of puffy fried shell that I first encountered on a taco quest in San Antonio, Texas .

I don't remember much of the madness of ordering, but eventually we ended up dining al Fresco on a square of concrete blocks just off the avenue. 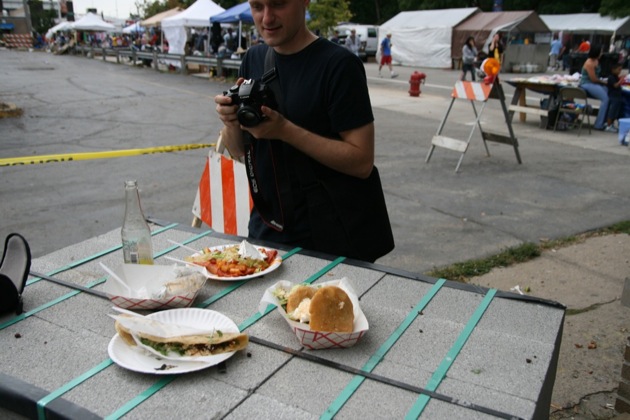 In front of us was a plate of the enchiladas, a quesadilla filled with barbacoa, a taco full of inky black huitlacoche (a fungus that grows on corn, which some call the Mexican truffle), and two gorditas: one full of crumbly red pork, the other with the "spicy beef" which may have been chuck or something less common like oxtail. 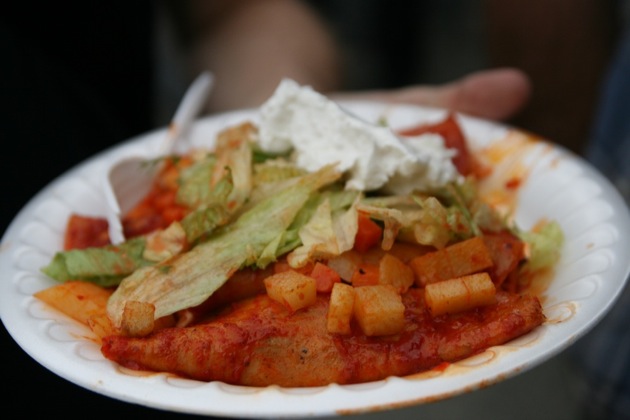 The enchiladas were not as fiery as they looked, rather subtle and mild--good, but not as good as the rest of what we ate. 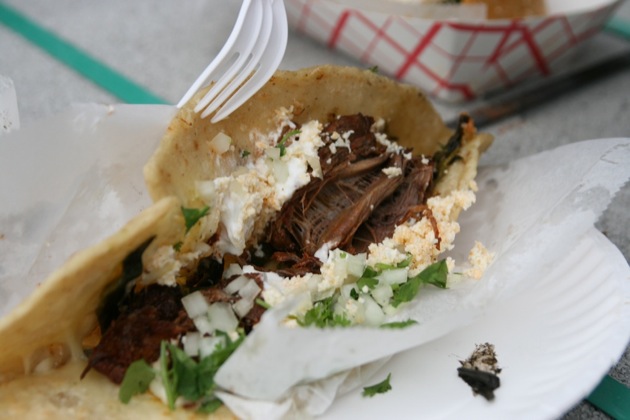 The qusadilla was lined with stips of poblano chili, a wonderful touch, and filled with a relatively lean barbacoa meat along with cheese. 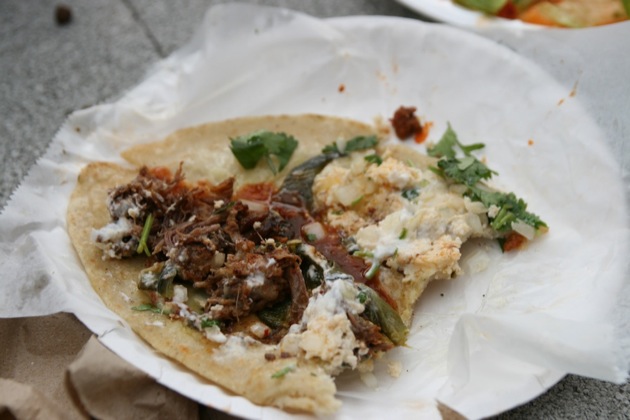 It really came alive when we filled it with a red salsa. 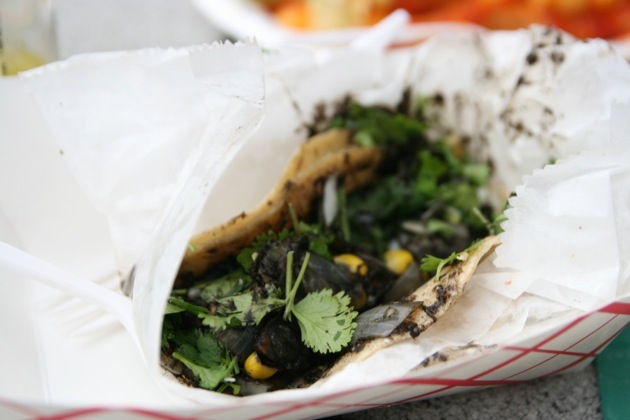 The huitlacoche taco tasted like corn with a funky edge to it, but not too funky. Huitlacoche can taste rather strong, but this was mild. 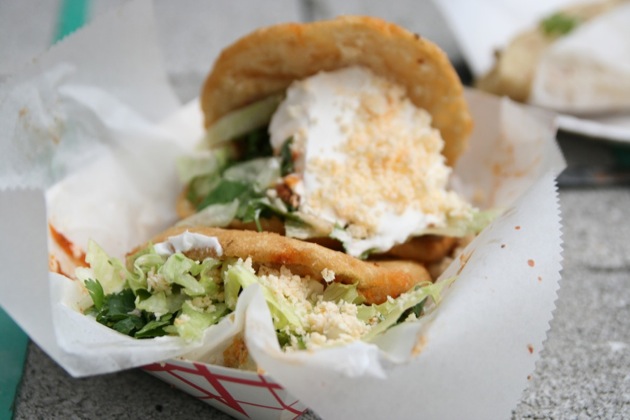 But the gorditas were the real story here: tender, crisp, of a transcendent texture. Besides being stuffed with meat, they were topped with lettuce, crumbled queso fresco, and a smear of thick crema . The pork was good, but the spicy beef was to die for, the soft texture of the meat a revelation against the crisp gordita.

Above all, the quality of the food from start to finish was superb--it seems nobody would survive long at Maxwell Street offering lousy food. As a Brooklynite I used to love heading to the Red Hook Ballfields , a little cluster of food vendors by some soccer fields in Brooklyn that has been celebrated repeatedly by bloggers and even the New York Times. But I'm going to be honest: all that enthusiasm says more about New York's poverty of Mexican food than anything else. Chicago's Maxwell Street Market easily blows away anything I'd ever eaten in Red Hook, or anywhere in New York.

Man, it's good to be in Chicago.