Make both of those at home. 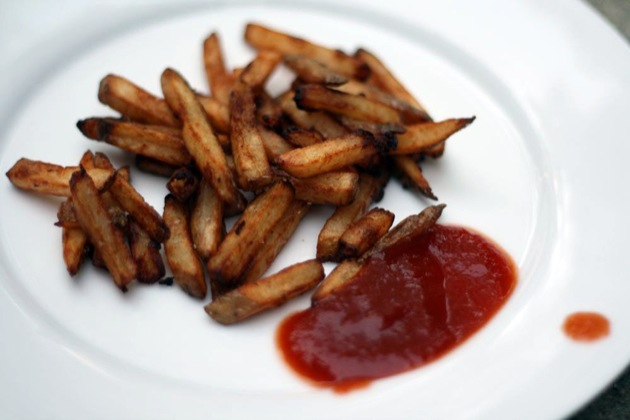 The tomatoes were turning on me. A few weeks ago they were red and rosy, destined for a starring role in a BLT. Now, I'm not sure if they can withstand the scrutiny of the spotlight. They are still light years beyond what appears during the winter here in the Midwest, but not quite the ones you can slice up, sprinkle with salt, and eat raw. I kind of wish I would have known this before I bought a huge batch of them at the farmers market, but oh well. With way too many tomatoes, I realized it was time to cut my losses and make something that would last. And for some reason all I could think about was ketchup.

Ketchup seemed like the perfect way to use up leftover tomatoes. All I had to do was cook the toms down with some spices and bottle it up, right? But you don't eat ketchup with a spoon (at least I don't). It needed a partner, something to carry the flavor. It was only then that I questioned how much I actually use ketchup these days.

I mean, I think I've had the same monster bottle of Heinz ketchup in my fridge for months now. The condiment has taken a lot of flack recently. While it's been sacrilege to put ketchup on hot dog for a while now ( in Chicago at least ), the angry letters are coming in from all over the culinary map. Burgers are now off limits to some . Even fries at restaurants are starting to be sided with an array of other condiments, like aioli (which can be delicious). I even find myself slipping down the slope into anti-ketchup elitism. 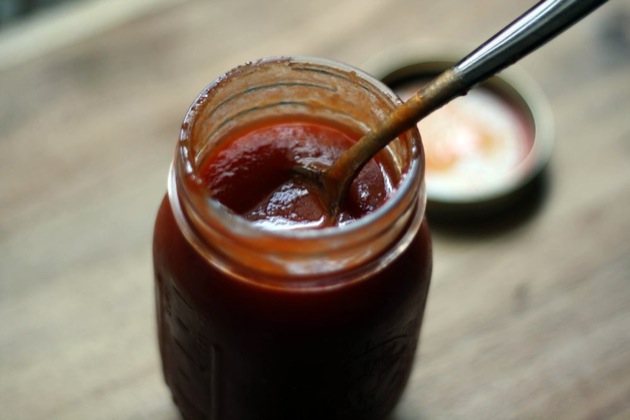 But like most children that grew up in America, I have awfully found memories of dunking french fries in ketchup. I loved the way the cool condiment clashed with the hot fries. It may be an elementary pleasure, but it's a pleasure nonetheless. The problem is that some commerical ketchups mar the taste of whatever they touch. They are too sweet.  But what if I were able to make a ketchup that I wasn't embarrassed to have around? One that would latch on to fries and actually make them taste better? 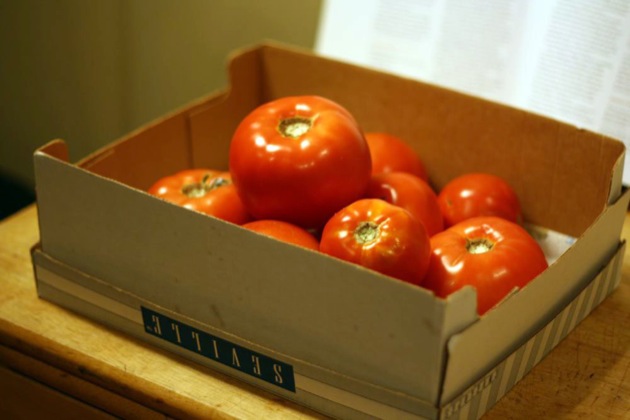 The goal was to reaffirm my love of an old childhood classic, while hopefully updating it to my more balanced palate.

For help I checked out a whole slew of ketchup recipes. The history of ketchup is sketchy , and some modern cooks, like Heston Blumenthal , have followed the trail back to India and Asia. Their research turns up condiment that is loaded with things that never come anywhere near ketchup today. I think their pursuit is utterly fascinating, but it's a trip I didn't want to take. I wanted ketchup that was still familiar to me. It need to be loaded with tomatoes, slightly sweet, with a background laced with spices.

For that reason, I settled on a recipe by Hugh Fearnley-Whittingstall. He's the mastermind behind Britain's River Cottage , a series of TV shows and books. His enthusiasm for ketchup is infectious. He loves the condiment when it is made correctly, and has even hosted a ketchup cookoff on one of his shows. I also love that fact that he's particularly mum about his own recipe, going so far as say he'd never give it away. He'd like it to remain "a trade secret." There is, confusingly, a recipe for ketchup in the River Cottage Meat Book . Perhaps it is not his treasured recipe, but I figured it would be a good place to start.

It doesn't disappoint. The first taste is the burst of fresh tomato flavor, but the end is layered with the incredible bounty of spices which include mustard, cinnamon, allspice, cloves, mace, celery seeds, and black peppercorns. It's almost good enough to eat with a spoon. 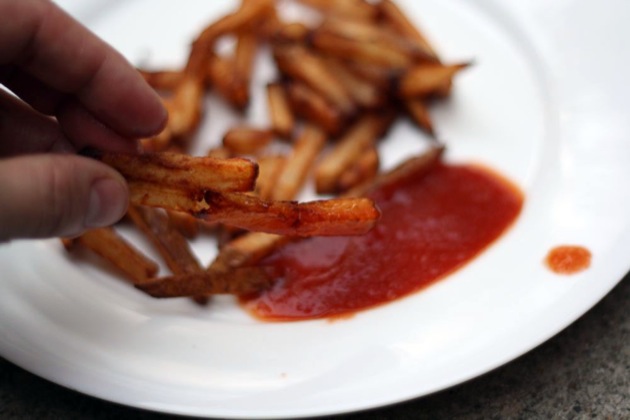 Luckily, there were fries. I stumbled upon this recipe in eGullet a few months ago, and it has made fry making process an easy going affair. It utilizes the standard double-fry method, but with one trick. After the first fry the potatoes are drained and then left to cool in the fridge. This effectively drys out the crust of each potato. When they are fried again that crust turns extra crispy, leaving you with gloriously crunchy fries with creamy interiors. It's a great method.

The problem with frying has and will always be what to do with the epic amount of oil. It seems like a monumental waste to chuck it out after one use. But I don't like to think about it that way. Frying to me is an indulgence, a supreme act of gluttony that gets in the way of common sense. Because it is a expensive and wasteful, I tend to deep fry things only rarely. Now, each time I do decide to fry it becomes an event. I relish the times when I get to glug out the oil, because I know something like this awaits. 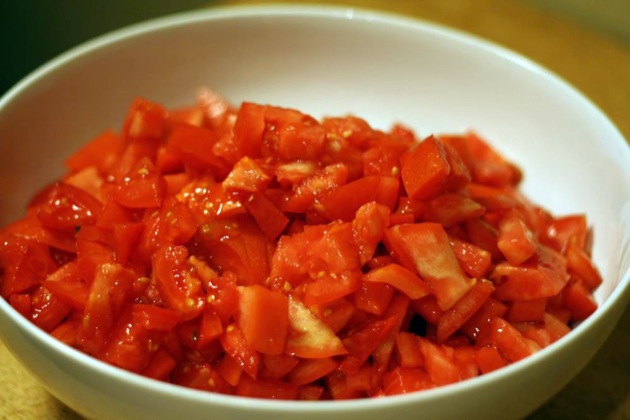 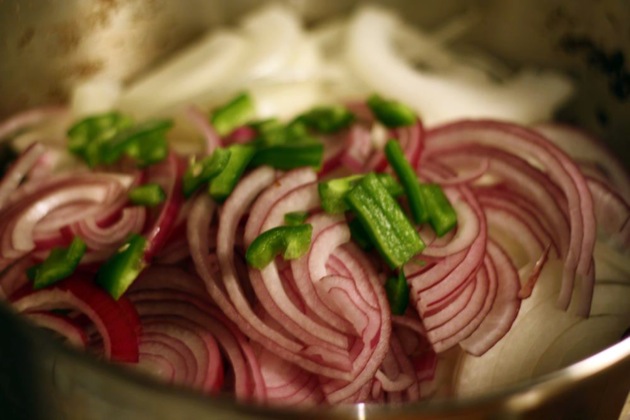 Toss the tomatoes, onions, and jalapeno into a large pot. Turn the heat to medium cook until everything is soft. Stirring occasionaly, this should take about 20 minutes. Then take a ladle full at a time and push through a metal strainer. You want to keep the juice and discard any of the solids that stick to the strainer. 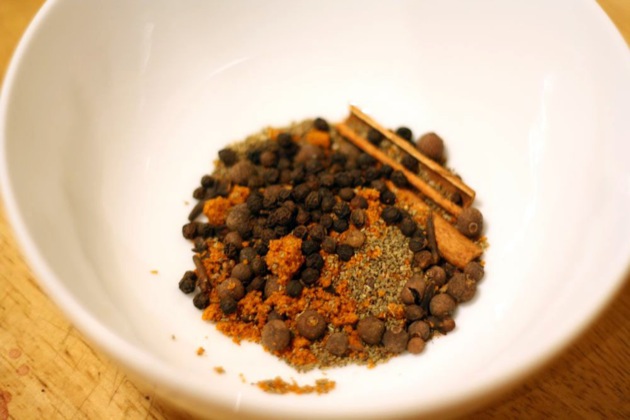 Pour the liquids back into the pot and add the sugar, vinegar, and mustard. Combine the cinnamon, allspice, cloves, mace, celery seeds, black peppercorns, bay leaf, and garlic in a bowl. Then wrap up the contents in some cheesecloth or transfer to an unused tea ball like I did. 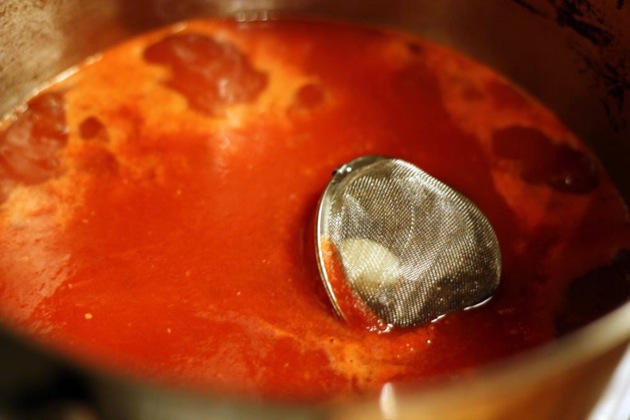 Add it to the pot.

Bring mixture to a boil, then reduce to a simmer. Cook for about 40 to 60 minutes, or until the mixture has reduced to a ketchup like consistency. Taste occasionally. Remove the spice mixture if it seems like the ketchup is becoming to strong. Mine took about an hour, and after about 40 minutes I removed the spice mixture. When it's all done, season with salt to taste.

Let cool, and then transfer to a container. It should last for about a month. 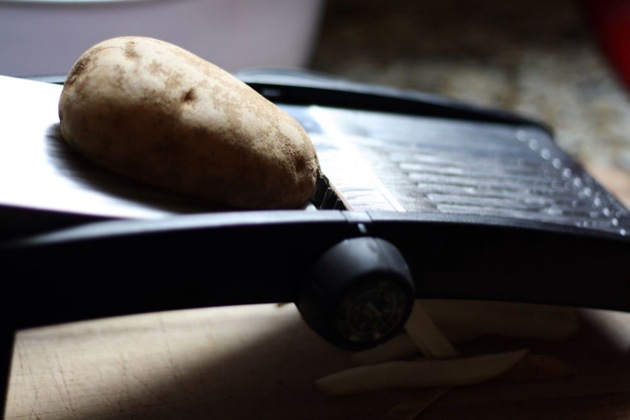 Cut the fries. I used a mandoline. It made the whole process extremely easy, and perhaps a little dangerous. I kind of lost the guard, and that becomes an issue when I get to close to the bottom of the spud. So far I've only sustained pricks, but I should be smarter. 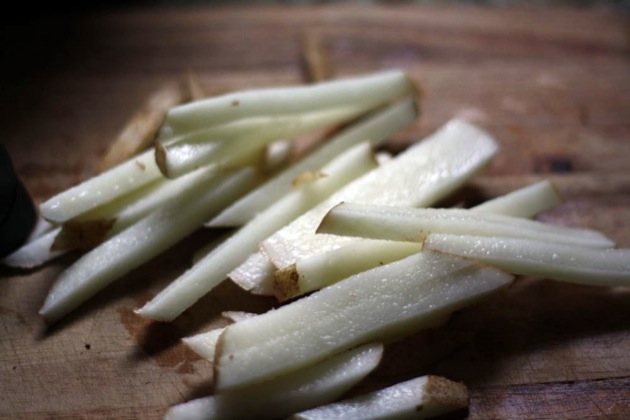 Anyway, you want them to be of uniform size and shape, about 1/4 inch thick. 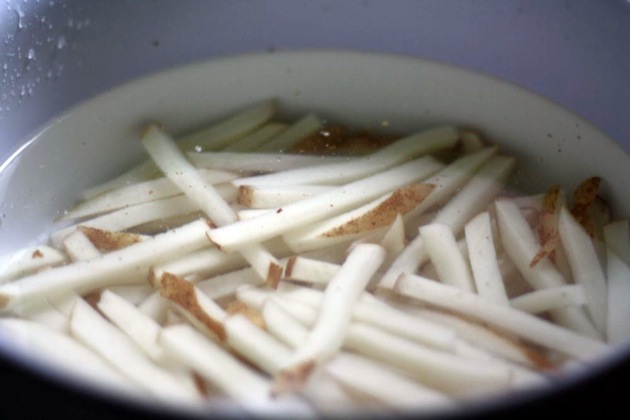 Transfer the cut potatoes to large bowl filled with cold water. Let them hang out for 2 hours. 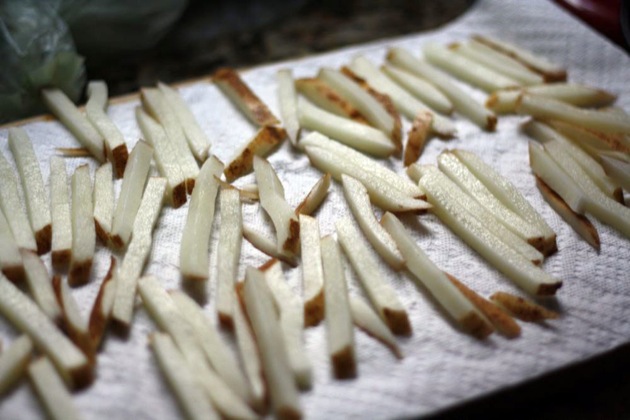 Drain the water off, and dry the fries on a bunch of paper towels. 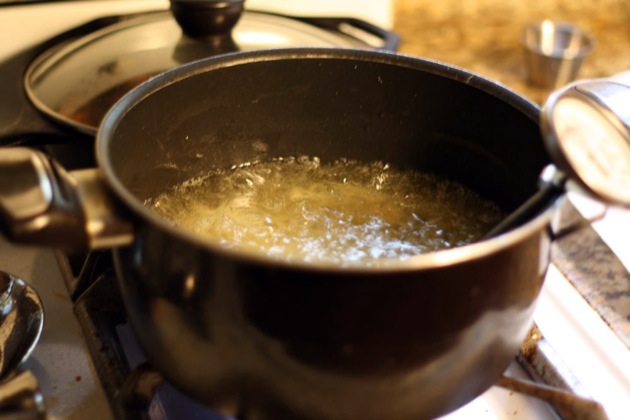 Pour some oil into a large pot so it comes about halfway up the sides. Make it easy on yourself and use a deep fry thermometer. Bring the oil up to a temperature around 275. Add about half of the fries to the oil, or however many will comfortabl. Cook for 4 to 5 minutes, or until soft. Transfer the cooked fries to a wire rack to drain. Repeat process with other fries.

When they are all done, spread them evenly out on the wire rack and transfer to the refrigerator to cool. 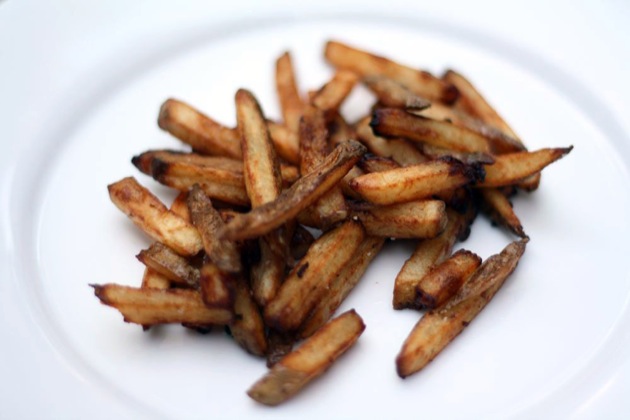 When they are cool, crank the heat on the oil and bring it up to 375 degrees. Cook half of fries again for about 3 to 4 minutes, or until crispy and golden brown. Transfer the cooked fries to a bowl, and immediately sprinkle with salt. Toss and taste. Add more salt if necessary. Repeat with the rest of the fries.