Because fresh pasta deserves a sauce this good. 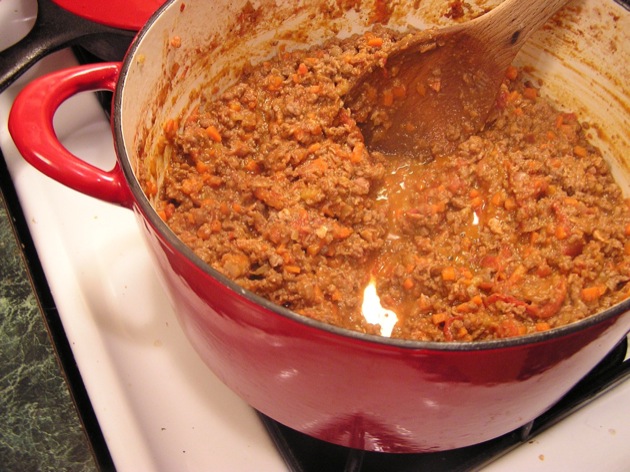 Once I figured out how to make fresh pasta , I waited all of 12 hours before I set out to create my own Ragù alla Bolognese.  It was a goal of mine ever since watching an episode of Heston Blumenthal's TV series In Search of Perfection .  The premise of the show is for the acclaimed chef to reexamine some stodgy British classics by going back to the roots of the original dish.  His final recipe usually involves dozens of ingredients and insane preparations, but I've had luck with his recipes before .

But what got me about this episode on Ragù alla Bolognese wasn't his final incredibly long and complex recipe . It was his research.  While visiting some of best restaurants in Bologna, Italy, he showed these Italian men stirring huge pots of barely simmering sauce.  And in one scene Heston sat down to a lovely bowl of their real ragu.  He twirled his fork around, mixing the tender meat with the thin strands of tagliatelle, until the sauce bled onto the pasta, turning a deep burnt burgundy.  The dish came together into one glorious whole.  Then it struck...I don't think of ever actually had this.

I've had what the British call Spag Bol and what every American calls spaghetti with tomato sauce.  But this thing they were creating with wide fresh pasta topped with just a little bit of meat sauce, that I can't recall ever eating.  It made me mad.  How does one go through life never eating this?

The most infuriating part was was how simple most of the preparations were.  Even the most authentic places he visited used less than 10 ingredients.  They were a model of simplicity.  I could have easily made my own version a year ago if it weren't for one enormous problem.  I didn't know how to make fresh pasta.  The heavy sauce would fall right off even the fanciest dried pasta.  I waited. 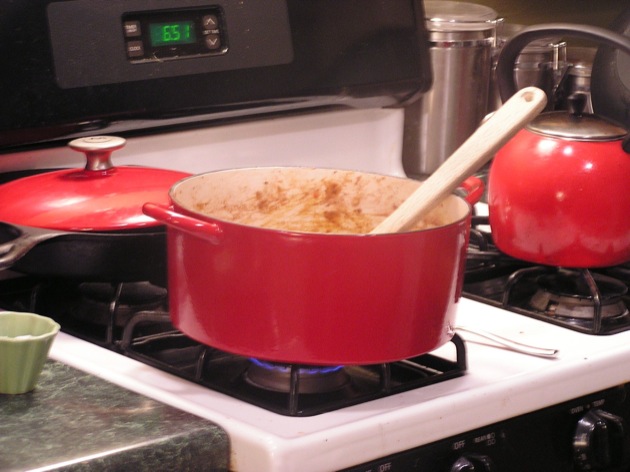 After one successful test round making tagliatelle topped with a little butter and cheese , I decided I was ready and pulled out a few books to figure out how to make my own Ragù alla Bolognese.

Though I'd planned for a long time, I hadn't exactly settled on a definite recipe.  There is the official recipe mandated by the Bologna chapter of the Accademia Italiana della Cucina , which looked amazing.  I especially loved the use of pancetta at the beginning.  But I was also smitten with this recipe from Saveur , which used just a little more tomato.  For some reason, I couldn't pull myself to get rid of the tomato entirely.  The last decision was what kind of meat to use as the base.  Most used beef, and chuck in particular.  But some used pork shoulder.  I decided to go only with beef this time.

It took about 6 hours.  Which isn't the same thing as taking a long time.  I walked the dog, went to the store, cleaned the apartment and the car, and went to the grocery store, all while this thing was hanging out.  Each time I returned home I was greeted at the door by a thickly simmering sauce.

By the time it was finished, the liquid had all but disappeared and what I was left with was as soft as baby food.  It reminded me of real Texas chili , which has spices and vegetables and all that jazz, but in the end everything comes second to the meat.  It was potent stuff, and just a dollop on pasta was all that was needed.

It felt very rustic and real, especially because I ground my own meat and ate it with handmade pasta.  It certainly was an all day affair, but one I wish I could waste every Saturday working on. 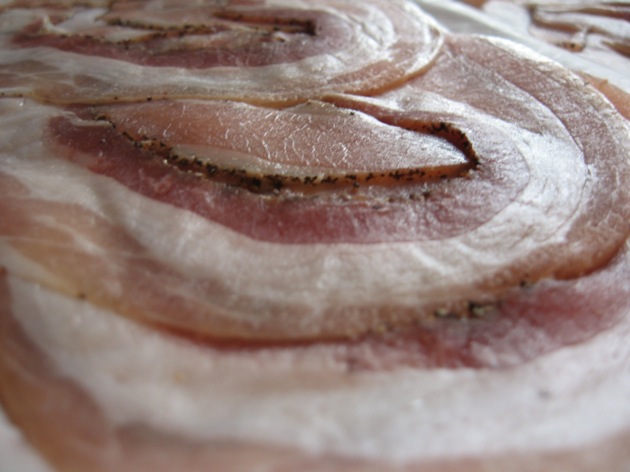 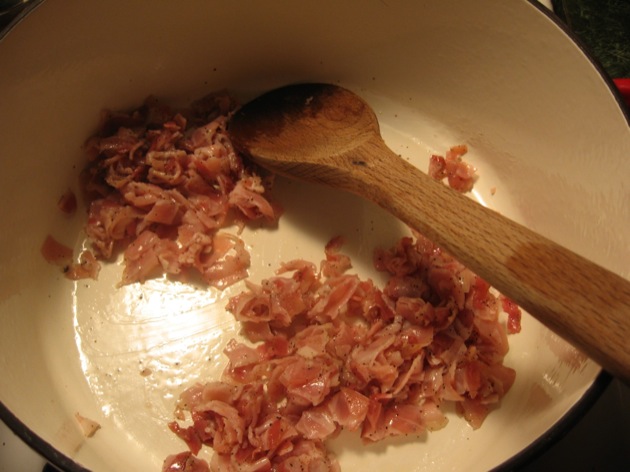 Toss the pancetta into a large pot, preferably a big, heavy dutch oven.  Cook over medium heat for 10 to 15 minutes or until the fat has rendered and the bits get a little crispy. 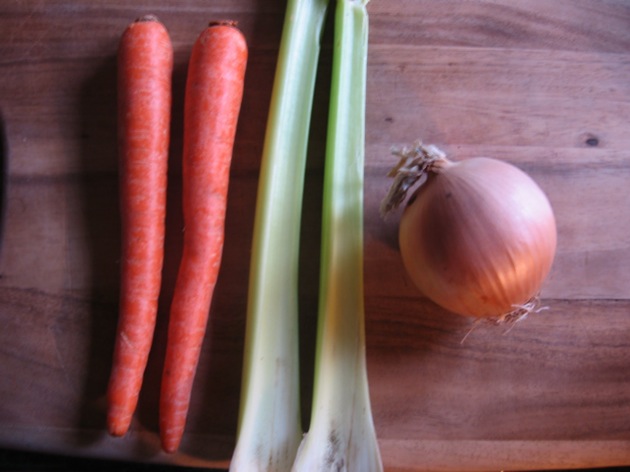 Meanwhile, chop all the veggies. 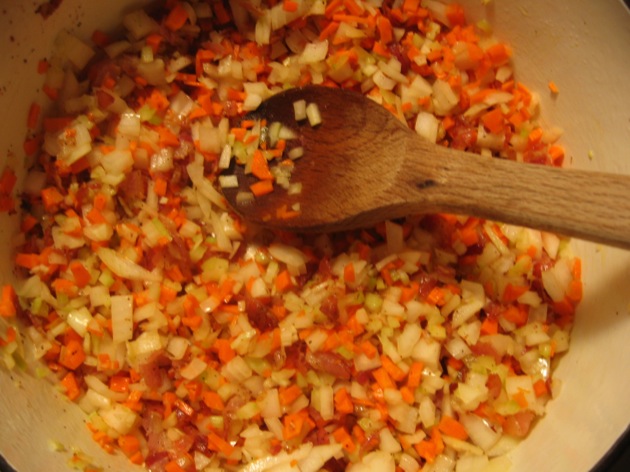 Add the vegetables to the pot.  It will seem like way too many vegetables at first.  Do not despair, they will quickly decrease in size.  Cook for 15 minutes, or until the onion is very soft but not browned.  Stir occasionally. 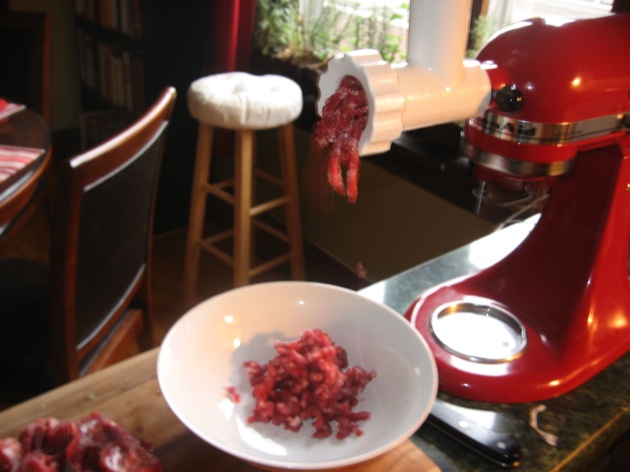 While that's cooking away, grind the chuck.  You could also just buy ground chuck from a reputable butcher. 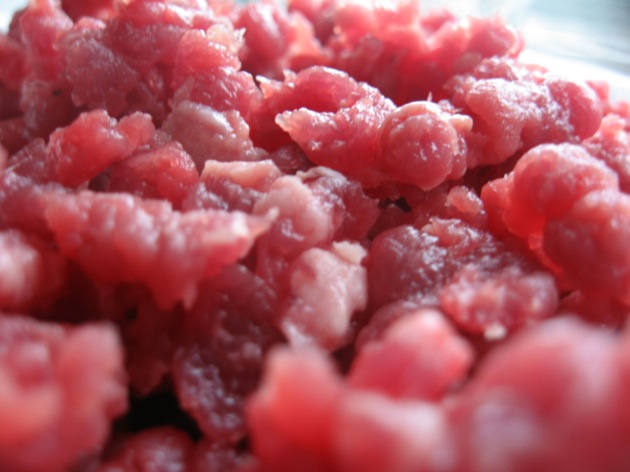 Ask them to grind it on large die, though. 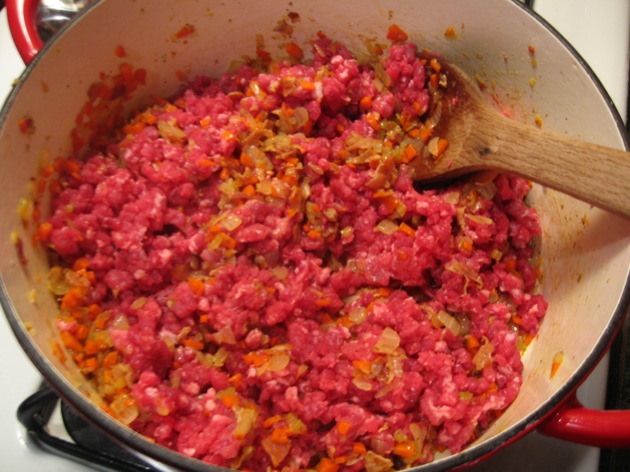 Add the beef to the pot.  Break up the clumps with a large wooden spoon and cook until the meat loses its color, about 5 minutes.  The idea is not to brown the meat.  You want it as soft and tender as possible.  Pour in the wine.  Cook until it evaporates, about another 5 minutes. 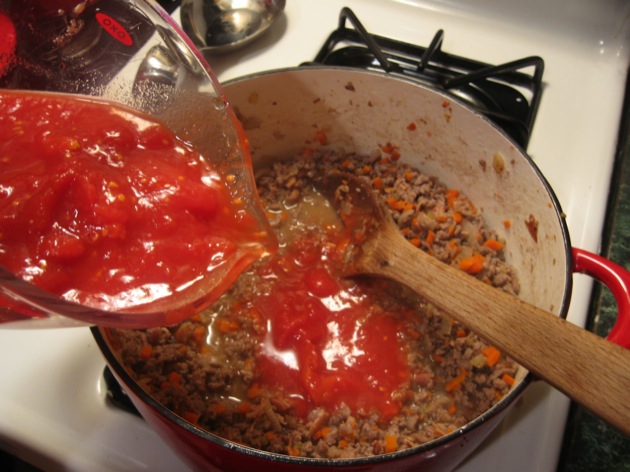 Crush the whole tomatoes with your hands, and then pour into the pot.  Stir well, then reduce the heat to low.  Season with some salt and pepper at this point.

Honestly, leave it on low.  Not medium-low.  It shouldn't even be simmering, just the occasional bubble should pop up.  I managed to wait 6 hours, but that was it.  Towards the end of the process pour in the cream.  Taste, and season with more salt and pepper if necessary. 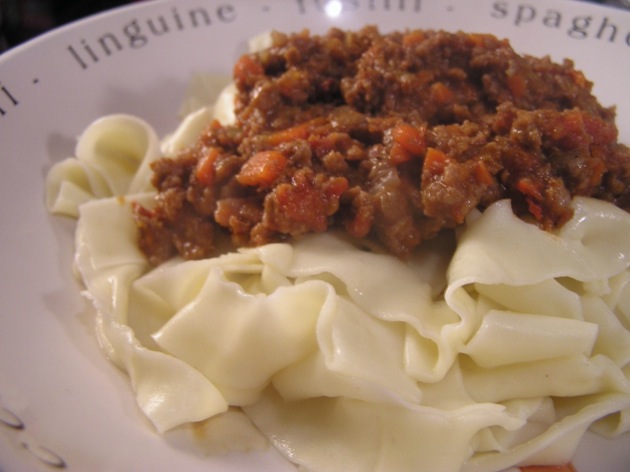 Serve the sauce over fresh tagliatelle .

Be sure to mix it up well before digging in.