A baby step towards making salami.

It's similar in appearance and texture, and has that unmistakable salty tang of cured meat.  I'm surprised it never occurred to me before, but the idea is simple.  Pork tenderloin, which is already in a convenient salami-like shape perfect for slicing, makes a perfect dry-curing project.

There is already one traditional cured meat called Lonzino , Italian, which is made not from the tenderloin but the regular boneless pork loin, a much larger piece of meat.  Lonzino is stuffed into a casing as well, rather than just being hung to dry on its own.  Lonzino is a difficult project because of its size and long drying time, increasing the risks of the wrong molds showing up--but the tenderloin is a much quicker project that can be done without the casing.  I found my recipe from Jacques Pepin, who calls it Saucisson of Pork Tenderloin.  Saucisson is the French word for a large cured sausage, so it's not technically a saucisson.  But it kinda resembles one.  The result of curing tenderloin is a very lean, mild taste.  Many compare Lonzino to the more well-known Bresaola, which is made from the lean beef eye of round, and the tenderloin project is similar; it's a very clean taste owing to the lack of fat--and for that same reason it also lacks the round mouthfeel that pork fat imparts.  But still, it's quite delicious.

I'd still like to experiment with this project some more.  Following Mr. Pepin's recipe, I used a great deal of salt (with some brown sugar mixed in) rather than just enough to rub in and coat the meat.  This is one approach to meat curing, which I used when making Duck Proscuitto --lots of salt to cover, short curing.  But other projects, such as bacon, require less salt and a longer salt cure.

Mr. Pepin calls for just an overnight cure in the salt followed by 5-6 weeks of drying, but I left it in the salt for a day and a half.  As a result mine lost more moisture while in the salt, and dried far more quickly once I hung it.  In fact, it got a little bit too dry, especially around the narrower ends, so it's now in the fridge wrapped in a moist paper towel.  A cured piece of meat should still have some give when you squeeze it.

But the idea behind this project is the important part: pork tenderloin is small and relatively inexpensive, and a great project to try.  It's getting me primed to make salami someday.

Trim 2-3 inches from the narrow end of the tenderloin.  Aim for a consistent thickness throughout so the meat cures evenly.

In a small bag, combine the salt and sugar.  Put the tenderloin inside and blow a little air into the bag.  Pinch it closed and toss it around to coat the meat very well.  Saucisson Shake and Bake! 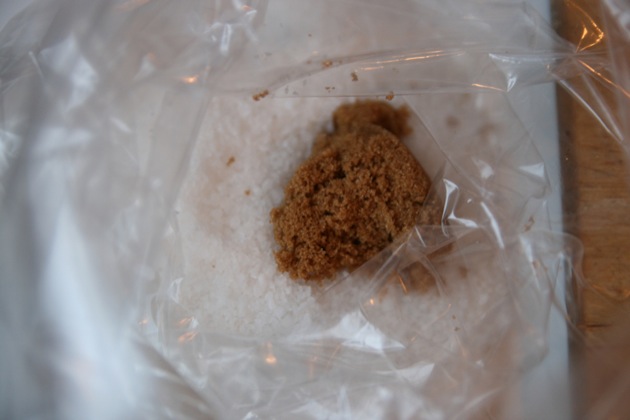 Seal the bag and refrigerate for about 12 hours.  Wipe dry with paper towels.

Rub the meat with cognac, then sprinkle on the spices.

Wrap in muslin or cheesecloth, tie up like a roast, and hang in a cool, slightly drafty place until no squishiness remains in the center of the meat but the tenderloin is not overly hard -- aim for the texture of salami.  A bit of air circulation is important to encourage drying, but not so much to overdo it.