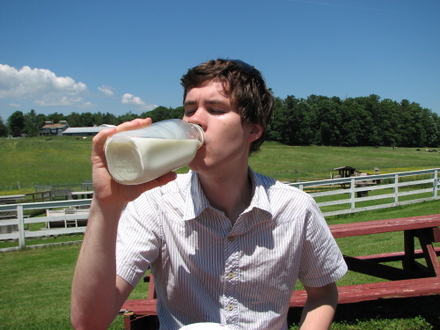 Ever since I started reading about "raw" milk, I've wanted to try it.  Illegal in New York and most states, raw milk has a strange mystique about it: proponents claim that unpasteurized milk has remarkable health benefits , is drinkable by even the most lactose intolerant people , and tastes twice as good as the milk you're used to.  Once you drink your milk raw, they say, you'll begin to notice regular milk tastes "cooked" and flat.  Others claim you'll catch half as many colds per year. What to make of these claims?  Could something as mundane and simple as milk really hold this power, if only our milk producers didn't constantly subject it to high temperatures?

Why is most milk pasteurized?  Well, it's much safer.  But so is a well-done steak, and I'll never eat that.  The problem is, in the process of pasteurization, raw milk enthusiasts say many good ~~ pathogens ~~ bacteria are destroyed in the effort to ensure against bad ones, especially those that help the human body digest milk (hence why many lactose intolerant people can drink it without problem).  The story of milk pasteurization dates back to the 19th century, when "city" cows would live in cramped, dirty quarters in Lower Manhattan, and farmers would build their dairies next to whiskey distilleries to feed cows the leftover mash.  The cows got sick, bad milk was produced, people got sick.   Milk was the scapegoat, and rightly so.  But is the situation the same today?

Sadly, the answer is in some ways, yes.  These days, producers pasteurize our milk because it's become standard, it lengthens shelf life, and, frankly, it allows factory farms to be less careful and spend less money (which includes feeding cows an improper diet of corn, and using hormones).  Pasteurization is really the only economically viable way to mass-produce milk safely.  Certainly, pasteurization still saves many from sickness.  I would never drink raw milk from a corn-fed cow that normally supplies large milk producers.  But when it's a small farm that lives with its animals, cares for them, and has been making dairy products for generations?  That's different.  Pasteurized milk is all I have ever known.  But I've been beginning to wonder what raw milk really does taste like.  In New York, at least, raw milk is only attainable by secret, speakeasy-like means (" The first rule of Milk Club is you do not talk about Milk Club ").

Smiling Hill Farm, outside of Portland, Maine, is where Danny Meyer, we heard, buys his butter.  You can walk in and buy milk, cheese, ice cream, and other foodstuffs.  On the way in, a giant fiberglass cow named Moo-chelle is there to greet you. 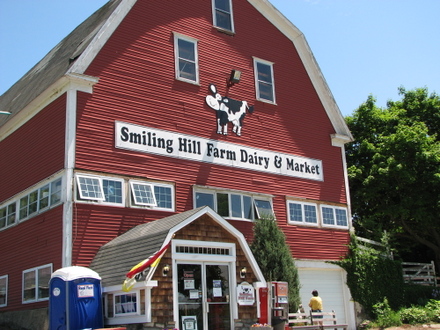 Inside, the back wall is lined with refrigerators full of milk, cream, and cheeses.  We picked up a quart of whole milk, some cheddar, butter, crackers, and a scoop of coconut ice cream.  When the woman who
checked us out began ringing us up, I stopped her immediately.  "You just charged us one dollar for the milk.  This is a quart size."

"Trust us," she said.  "It's not too hard.  The cows make it, and we just bottle it up.  You must be from a city." She smiled knowingly.  We talked for a while longer--the family has been running this farm for generations, and she met her husband while milking cows.  Though the milk at Smiling Hill is not raw, it's hormone-free and very, very fresh.  She told us, however, that we could walk into Whole Foods and buy raw milk right off the shelf, from local producers.  In Maine, a store can sell it with a special license.

Outside, we found a table next to the John-Deere-o-saurus sculpture (which I unfortunately don't have a picture of).  The milk was ice cold, just slightly sweet, rich and fresh.  The butter was also excellent--it tasted at first like a tangy cheese.

But we were still curious about raw milk.  What did it taste like?  On a dairy high, we drove straight to Whole Foods and walked straight to the milk section.  Sure enough. 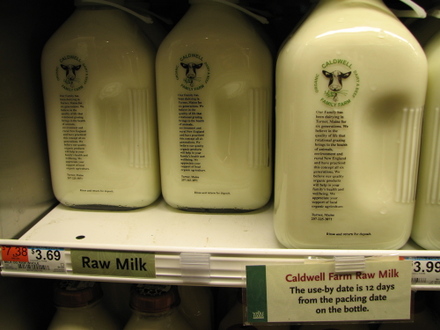 After all the shrouded mystery over raw milk, the stories of secret societies and meeting places , it was unsettling to see it right on the shelf in front of us.  We asked a Whole Foods employee for help deciding, and he began telling us that his kids all drink it and haven't caught a cold since they started.  He helped us pick out a smaller container, then we picked up a chocolate chip cookie and sat at a table ten feet from the registers, unable to wait any longer. 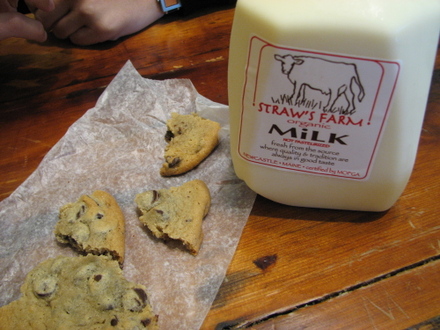 Elin politely broke up the cookie, and let me take the first sip.

Well, it was the best sip of milk I've ever had.  Admittedly, part of that might be the 6% fat content, which gave it an rich, rounded taste.  But it was also sweet and complex, without any hint of chalkiness...well, you may have heard Julia Child describe the roast chickens she ate in France as so..." chickeny! "?  This tasted milky , like milk is supposed to taste, natural and fresh.  After the hype, I was not at all disappointed.

I should mention that Elin can only enjoy limited amounts of dairy--no ice cream, no cream, and limited amounts of milk (as much as you'd put in a cup of tea).  She drank half this container, and we bought another the next day.  The luxury of gulping down fresh, good milk was wonderful for her.

As we finished, I looked up and noticed a sign hanging from the ceiling of our friends from Smiling Hill Farms, and had a moment of true satisfaction at the sustainable, local, good-feeling quality to our whole experience with milk in Maine.  Add that to our meal at Chase's Daily where we ate a combination restaurant/farm, and the revelatory experience that was Fore St. , and Maine itself equals quite the trip.  It made us, more than once, wonder if we could move to Portland.  Fantastic, fresh milk for one dollar a quart?  World class restaurants?  An arty vibe and young people?  Affordable rents?  These are all things we could get used to. 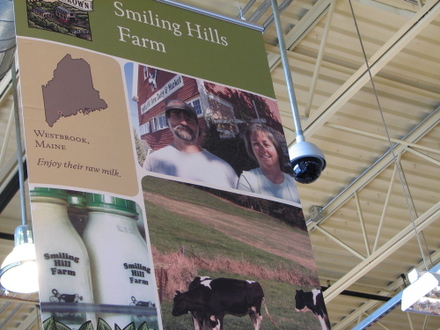