How to smoke pork belly at home. 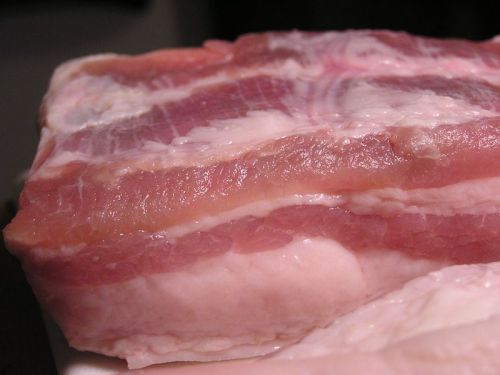 First, I needed to find some pork belly with its skin still firmly on. My previous attempt removed it , along with a lot of precious fat directly underneath.  My bacon didn't have nearly enough fat on it to fry up, so instead cooking up beautifully in a pan, it burned .  My local butcher wouldn't sell me a piece with the skin on unless I bought 10 pounds, a fact I still find ridiculous. A commenter pointed out that Asian Markets tend to sell pork belly with the skin still on.  The only Asian market I could find was 161 in Northern Columbus, which sat across the street from a Whole Foods, which for some insane reason can't even sell pork belly.  The Asian market had it, though not in as big a pieces as I would have liked.  But no matter, I just decided to buy two smaller hunks equaling about 3 pounds and got to business. 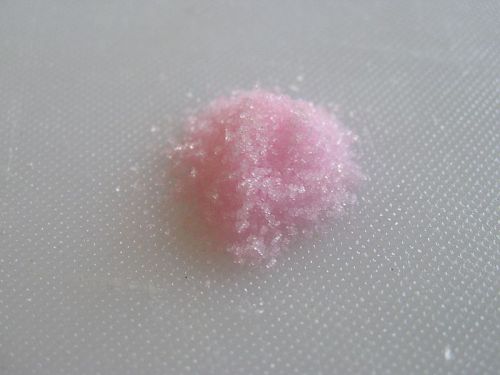 Second , I needed pink salt.  Blake talked highly about it, but I hesitated.  I couldn't find it at any specialty store in Columbus, including those that made their own sausages.  So I bit the bullet and ordered a large bag , which Blake assured me would "last for a long, long time".  He's right.  The pink salt (which is actually pink in color) is only used a teaspoon or so at a time.  Its traditional use was to help prevent botulism, but in this day and age of refrigeration its biggest draw is that it lends the meat a rosy hue and an unmistakable cured taste.  My bacon would look right. 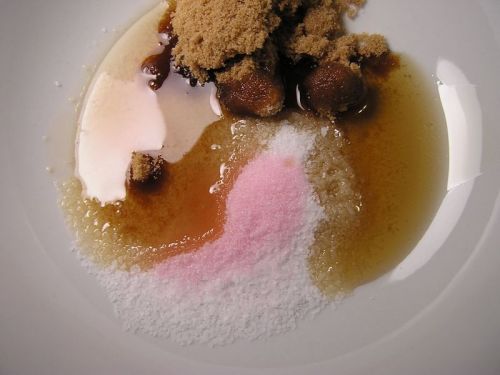 Third , I needed a more appropriate cure.  My previous attempt was too savory.  Like I mentioned earlier, I wanted bacon that tasted like good American bacon with loads of maple syrup.

I found this cure in Michael Ruhlman's Charcuterie. 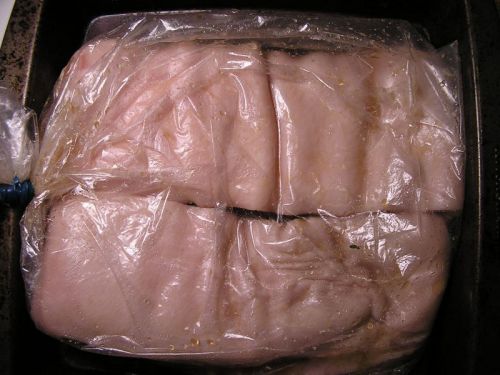 I mixed the cure together, and then rubbed the cure all over the pieces of pork belly.  I then placed them in a tightly fitting plastic bag.  Ruhlman said the cure would release some water in the pork creating a brine, so it was important that things were nice and snug. 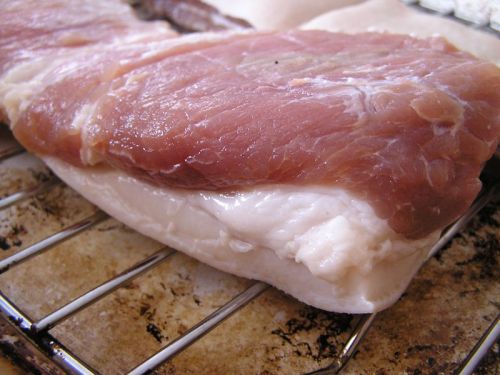 I cured the meat for 7 days, turning it over every other day.  On the seventh day, I removed the pork bellies, washed them off, and dried them for a day on a metal rack in the fridge. 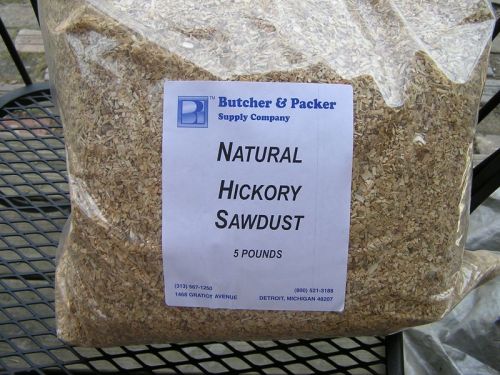 Forth , I would need to smoke my bacon.  Smoke, as I've come to learn from Mike Mills, is all about flavor. From the same company that I got the pink salt I ordered some hickory sawdust .  All I needed was a grill.  And without really consulting my sister, I decided to spend a whole day using her grill to make bacon.  I hoped she wouldn't care. 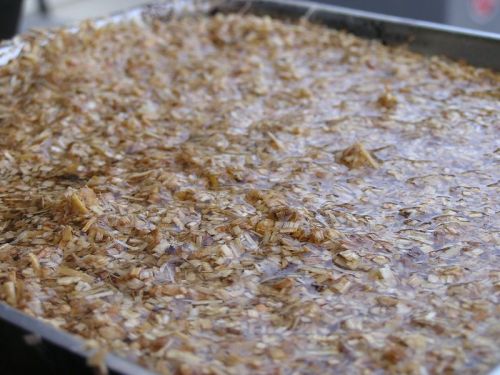 The cooking process has two components.  The heat, which needed to hover around 200 degrees for about 3 hours, would be supplied by the gas grill.  I found that if I turned one of the three burners on low and closed the lid I'd get just about 200 degrees.  I regulated it by opening the hood if the temperature got too high.

The flavor would come from the hickory sawdust, which I had prepped by soaking in water for 30 minutes.  All I would need to do now was get the chips smoking by heating them.  Easier said than done. It wasn't until I opened up my sister's gas grill that I realized I could just toss the wood on top of the flame like I had on a charcoal grill .  I'd have to contain the sawdust somewhere. 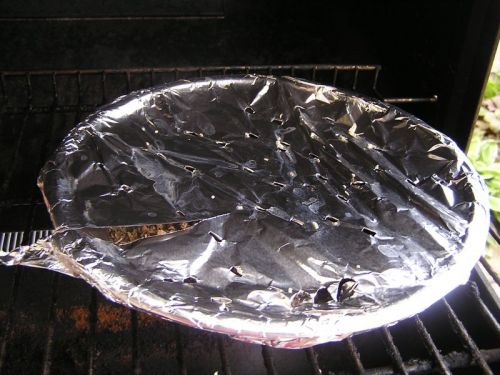 After some quick online consultation, I realized I could sprinkle some sawdust in a metal pan, cover it with foil, and then poke some holes in top to let the smoke pour out.  I set the tray over the burner.  I knew it would take some time, but after nearly 30 minutes without any smoke I started to panic.  My bacon was cooking this whole time and hadn't gotten any good smoke flavor. 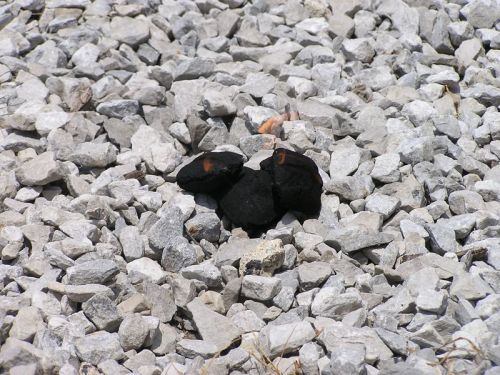 So I did what any normal person would do and went to the corner store and bought some charcoal.  I doused the briquettes in lighter fluid, lit them out by the driveway, and once properly ashed over, I tossed them in the metal pan with the hickory sawdust and set that try in the gas grill .  I expected instantaneous combustion and for glorious smoke to instantly pour out.  But nothing. I doused it in more lighter fluid, tossed in a couple matches, and waited.  Still no smoke.  What could I possibly do?

Without the smoke I could have done this in the oven.  The low heat source wasn't providing much flavor, and a low oven would have done just as well.  I went back upstairs and looked at the techniques to get the sawdust smoking.  Nearly every said to do it the way I had first attempted.  I figured maybe I wasn't giving it enough heat.  So I dumped out the charcoal on the car patio, put new sawdust in the pan, covered it with aluminum foil, poked some holes, removed the metal grate, and set the tray right on top of the burner.  But this time over high heat. 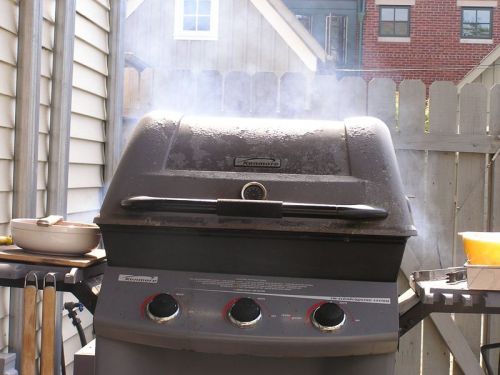 Sure enough, after about 15 minutes the smoke came. 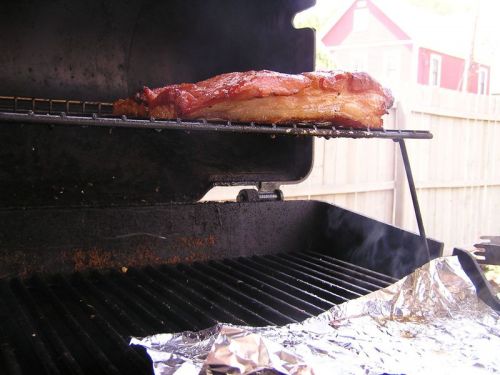 The smoke lasted for about 30 minutes.  To keep a constant flow of smoke, I had one tray over the high heat smoking away and then another tray beside it.  That other tray wouldn't begin to smoke until it was over high, but it seemed to have a leg up on a cold tray, which would have taken at least 15 minutes to start smoking. 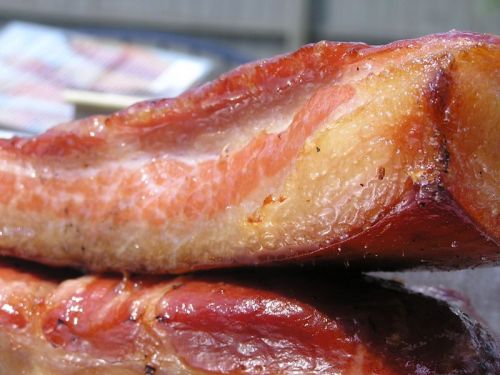 It took about 3 hours to get the bacon up to an internal temperature of 150 degrees.  Then I removed it from the grill and let it cool for 30 minutes or so. 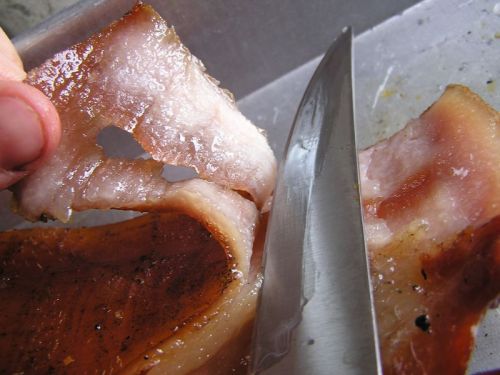 Though the skin helped make great bacon, it did need to be removed.  I took a long knife and slowly sliced as closely between the fat and skin as I could.  I wanted as much of the fat to stay as possible. 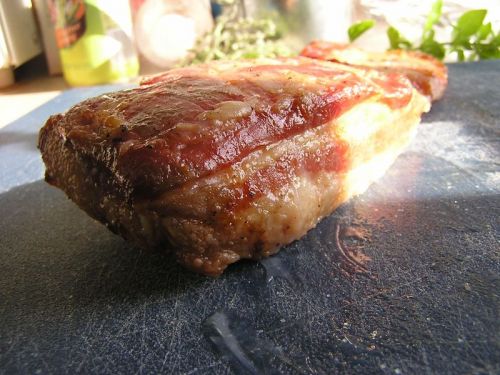 It certainly looked good -don't you just wanted to take a big bite of that?- but not much like the bacon I had wanted. 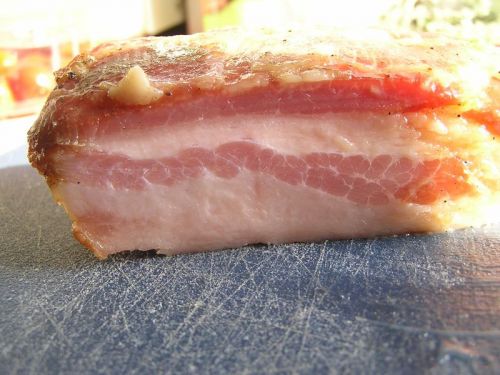 But once I sliced in, I realized that only the outside had the cooked appearance.  The inside looked exactly like regular bacon. 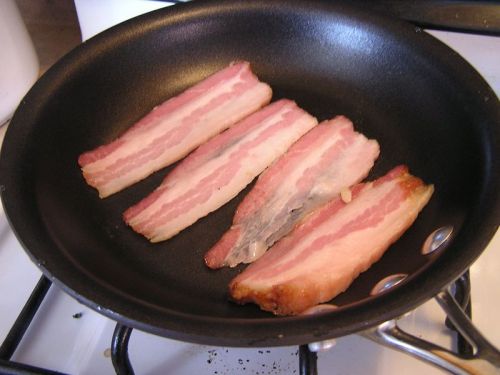 It was a lot harder to slice off uniform pieces of bacon than I had imagined.  But I finally did get a few pieces that, while small, did look like bacon. 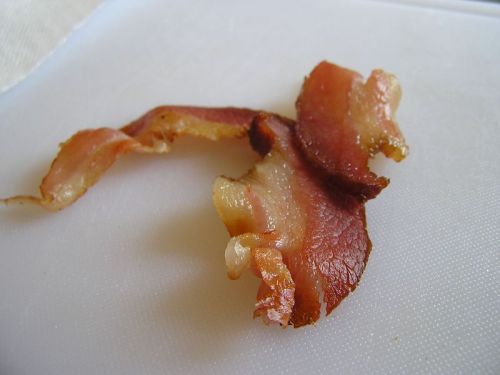 Ah bacon...  It took awhile, but like I mentioned earlier, it's unbelievably satisfying work.  And since it looks like regular bacon, I've been able to share this experience with other people.  I mean, who is going to turn down bacon?  But this bacon is different than the store bought kind.  The cure is vivid and clean, and the overall flavor is more pronounced.  Certainly not the easiest thing I've done, but I think completely worth it.