Risotto-style Pasta: How to Make Dried Pasta Taste like Fresh 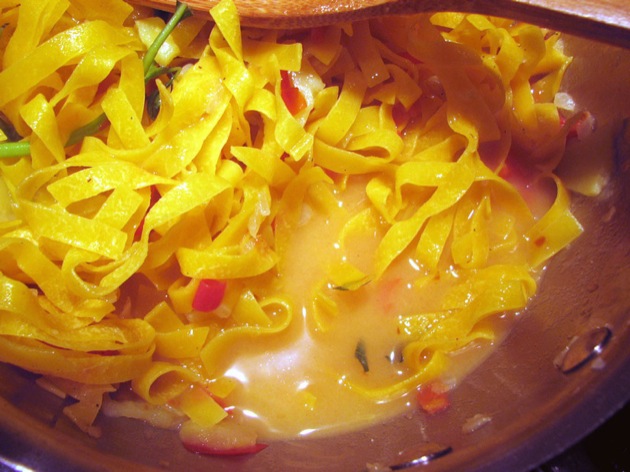 I’d venture a guess and say that there’s nothing I cook more than pasta.  For someone as devoted to simple cooking with simple ingredients as I’ve become, there’s no dish more fitting and open to invention, nor in possession of a learning curve that’s forgiving at first, but can take a lifetime to master.  It’s easy enough to make a tomato sauce and boil some pasta—college students everywhere do it all the time.  But a well-prepared Pasta Carbonara , one that’s light yet fatty and flavorful, well-coated but not gluey?  A classic like Bucatini all’amatriciana ?  Two people starting with the exact same ingredients or recipe can end up with very different outcomes. I think  I’ll be cooking pasta for the rest of my life, and perfecting my technique every time I do.  As Federico Fellini says, “Life is a combination of magic and pasta.”

So it was a surprise when I read somewhere that boiling pasta in salted water is not the only way to cook it.  There's another method, sometimes called absorption pasta .  I’d never heard of anything like this.  And apparently this is how they cooked pasta before the boiling method become ubiquitous and standard.

If you’ve ever made a risotto , you’ll understand the basics here.  The technique is to have some warm stock simmering next to the pasta pot, which you add in cupfuls as the dry pasta slowly absorbs it, along with the flavor of sautéed onions and other elements of the pasta dish.  Instead of boiling pasta in a separate pot while making the sauce, then trying to unite the two later on, you keep them together from the start.

If you’ve ever under-boiled your pasta slightly, then added it to your sauce to finish cooking until al dente , you’ll understand what a difference it makes to have the sauce absorb into the noodles.  So imagine if the pasta had been there from the start.

You may also have heard of the “pasta water” technique, when you save some of the pasta’s cooking water before you drain it, then adding some to your finished dish to help everything come together.  What you’re doing is trying to save some of the starch the pasta gives off in the boiling water, which later binds the dish together and lends it a kind of creaminess.

Well, imagine if all of that starch never left the sauce.  You’d have what I ended up with: a pasta dish that tasted like it had a cup of heavy cream, but had nothing more than a couple tablespoons of olive oil and some butter.

This recipe came from Alain Ducasse.  It even goes so far as to add potatoes in the beginning which lends even more starch to the process.

Actually, the biggest danger here is ending up with a very starchy, gluey mess, which is entirely possible.  If I were a better cook I think my own result would have been less so.  In the future I would use a large, wide skillet, rather than a saucepan, so that the pasta could spread out and absorb the stock as needed.  With a saucepan I was constantly stirring to ensure everything was being cooked, which ended up breaking down the pasta strands too much.  I would also use a short pasta like penne, something sturdier and less likely to stick together.

The best part about this is not having to wait for water to boil.  You just start cooking, and though the pasta has to cook for longer, I think it’s still less time overall.  And the best part of all is the result will taste silky and soft, while still toothsome.  In other words, your dry pasta will taste like it was fresh. 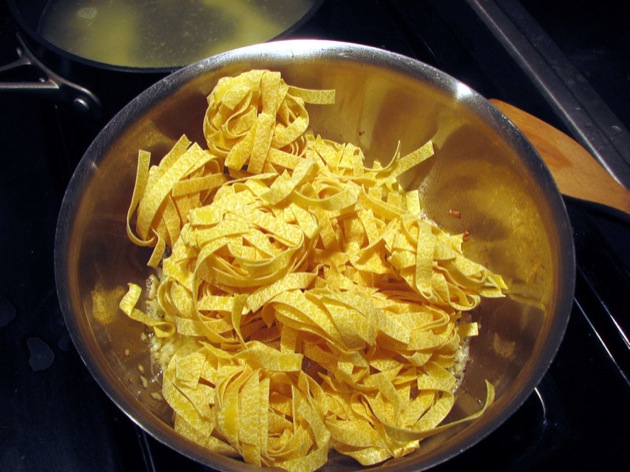 Note: the quantities in photographs are halved from this original ingredient list.

First, warm your stock on one burner while heating the olive oil in butter in a skillet (as I said above, I would use a wide skillet next time around, but you'll see a saucepan in these photographs). 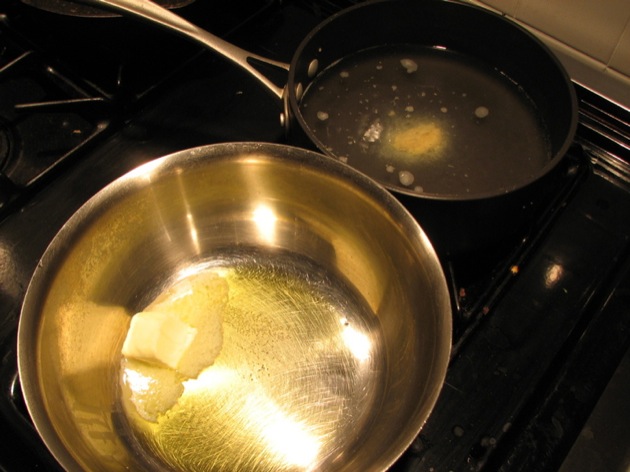 When the butter begins to foam, add the potatoes then onions.  I used some small golden yukons since fingerlings weren't available. 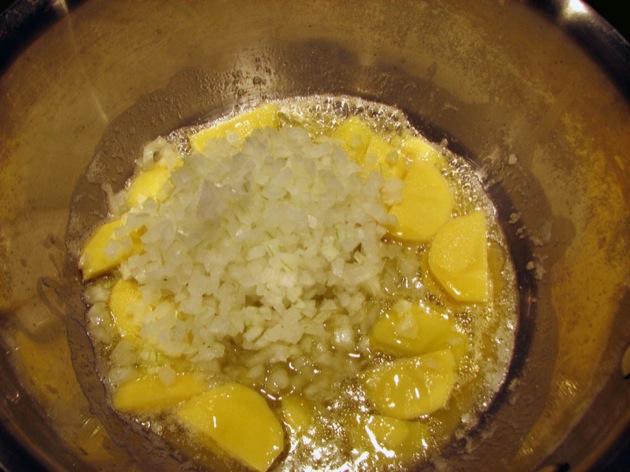 Once they are golden, add the pasta and toss until it's coated with the oil.  Then, add a little stock, the tomatoes, the crushed stems, and the garlic clove. 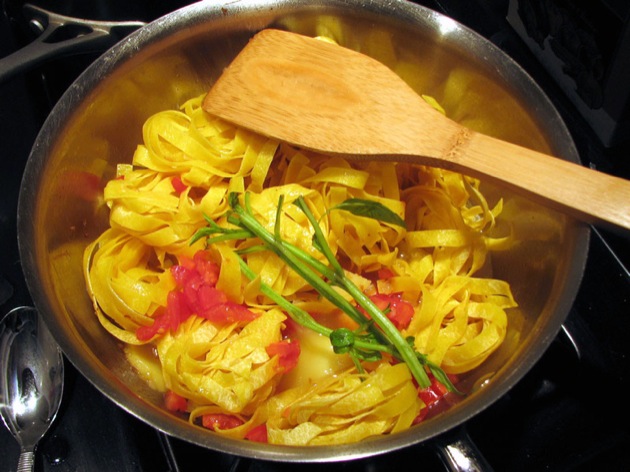 Now, you treat it like a risotto.  Add a little stock once what's in there evaporates.  Add the scallions after the first round of stock.  Use gentle heat so the pasta cooks evenly and all the way through (too high and the outside of the pasta cooks too quickly, eventually becoming gummy while the center remains hard). 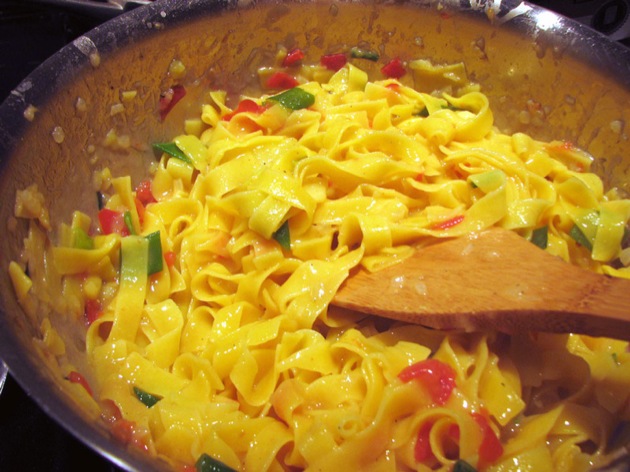 When the pasta is al dente, remove from heat and fold in the Parmesan, the slivered herbs, and all but one tablespoon of remaining olive oil.  Transfer to serving bowls, top with a little more Parmesan, and drizzle with the last of the olive oil. 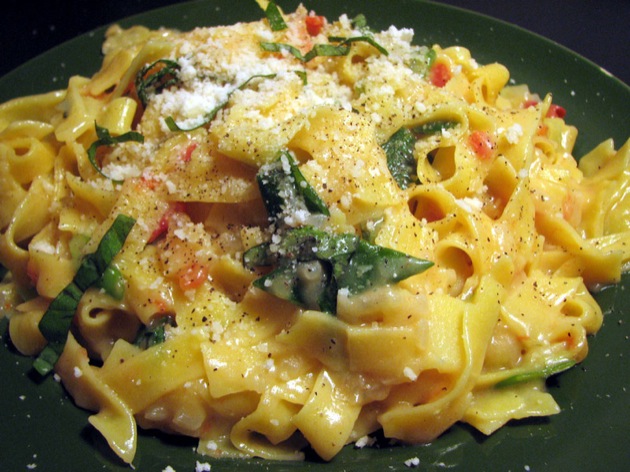