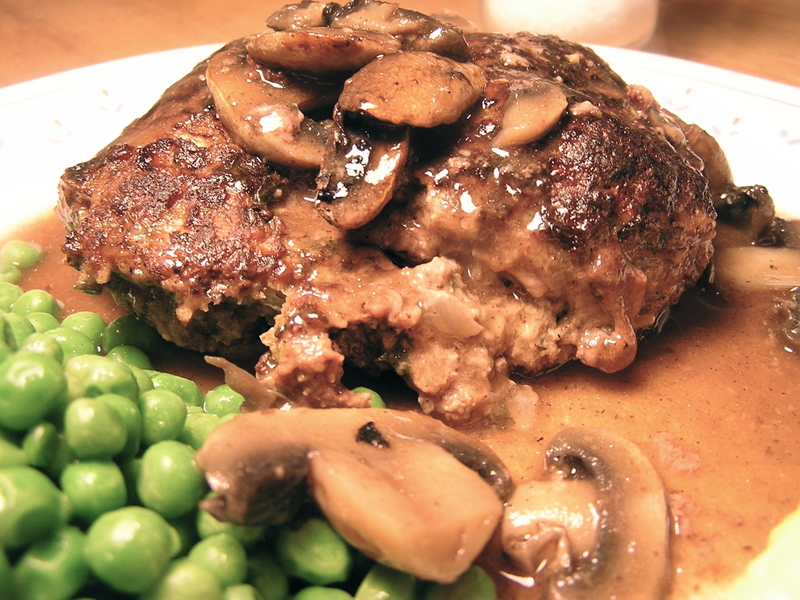 Besides meatloaf, it's the ultimate mystery meat.  Coated with a thick brown sauce and usually hard as a rock, Salisbury steak was the meal I most genuinely hated during my school years.  Its presence institgated the hoarding of dinner rolls and the unfortunate act of talking to girls, just so I could make off with one of their mini cobs of corn.  It was a tough day on the streets, and one I don't like to think about often.  But is there more to this cast off hamburger?  Could Salisbury steak actually taste good? I guess we'll never quite know for certain whether Dr. James Salisbury's last bite of food was his namesake dish.  But I firmly believe that he probably passed on with the general impression that he had somehow helped the human race immensely.  As a 19th century "doctor", he identified horrible problems (disease, death) and wanted to do something about it.  That is noble.  What is not, however, was his idea. He concluded that horrible, premature death was caused not by poor sanitation and inadequate diets of most residents of the 19th century, but rather by vegetables and starches , which had safely nourished humanity since something like the dawn of man. What he prescribed in its place?  Ground beef mixed with onions and topped with gravy.  The recommended dosage of this fine feast?  3 meals a day. Think of him as the pre-Atkins Atkins, the forbearer of horrible fad diets, and inventor of the Salisbury steak. There are some great historical web entries that detail his idiocy, yet somehow, even though his methods have been completely disproved, the Salisbury steak has stuck in there.  Maybe it was the World War I officers who had a bit of a "Freedom-Fry" bought and donned the German sounding hamburger steak the Salisbury steak.  Or maybe it was the Depression that caused people to look for cheap, hearty food.  But it eventually found its way into the school cafeterias across this great land, and on to my adolescent plate.  And now I'd like to try and save it. Like all the meals this week, Salisbury steak in the cafeteria is probably bought pre-cooked, so it can go from brown box to plate in a matter of minutes.  Some simple versions of the dish can be done at home and take no longer than 10 minutes to combine ingredients and saute them up.  But this just seemed like a glorified hamburger to me. I wanted the steak to have to work for its flavor; I wanted it to braise.  In the process, I came dangerously close to a meatloaf, but I'll cop to it now.  Salisbury steak should not be hard, and this method will create one succulent meal.  But it does take some time, and waiting around for a couple of hours to relive one of those traumatic elementary school memories seems like a perfect way to torture one's self.  But this Salisbury steak tastes like no other, and should hopefully erase those desperate moments at the lunch table when you scavenged around for something to keep you alive. Salisbury Steak 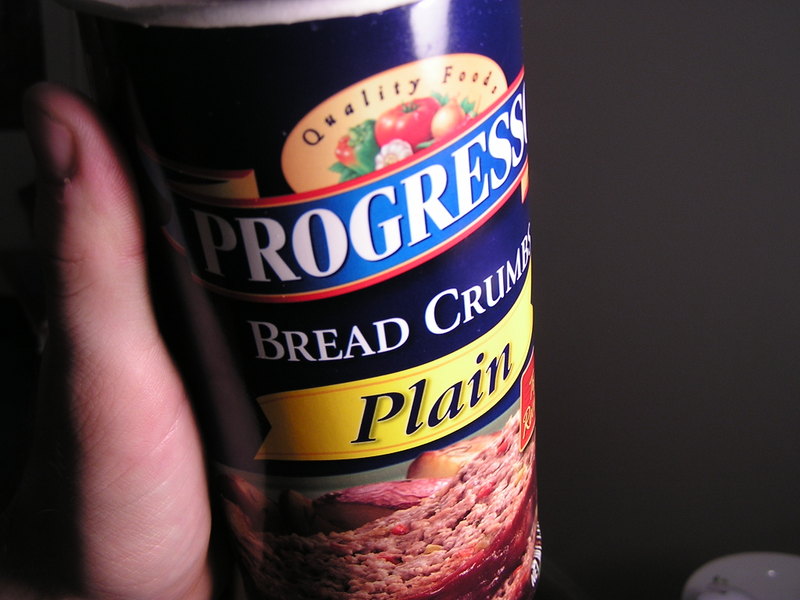 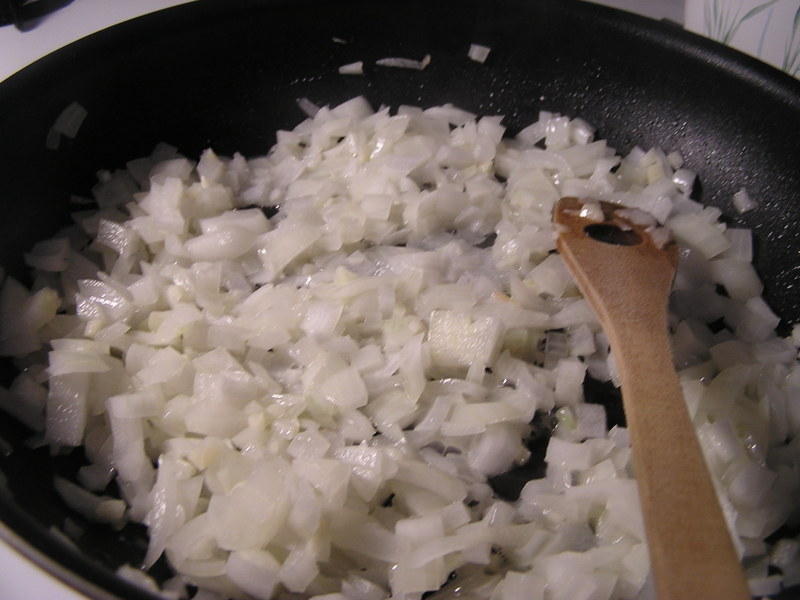 Preheat the oven to 375. Saute the onion and garlic in 1 tablespoon of butter over medium heat for about 8 minutes, or until they turn translucent.  When finished, remove from pan and toss in a bowl and let cool.  You'll be adding it to raw eggs, so make sure the mixture isn't hot.  I tossed mine into the freezer for a couple minutes. 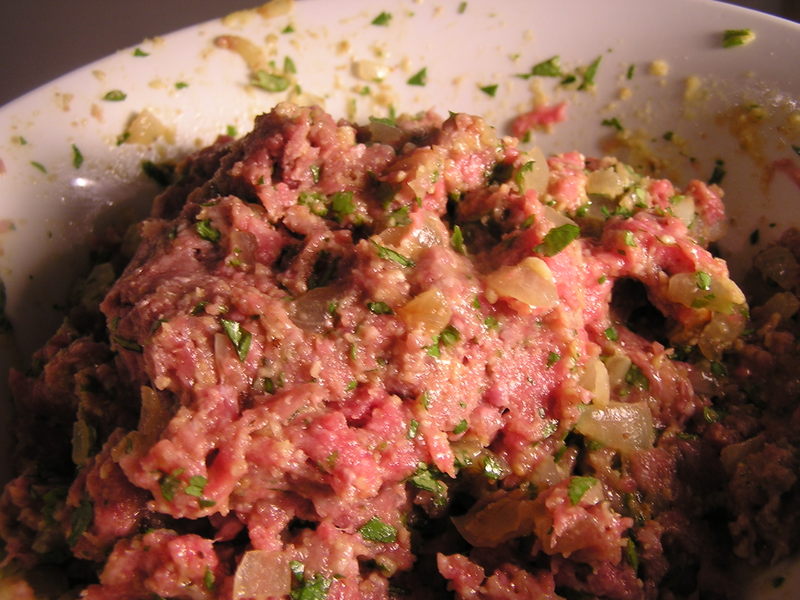 Combine the onion, garlic, parsley, bread crumbs, eggs, and whisk to combine.  When it's a homogeneous clump, and the beef, and working with both clean hands, combine everything. Form the meat into patties.  I made two quite large ones, which looking back I'd try to break up into at least three. 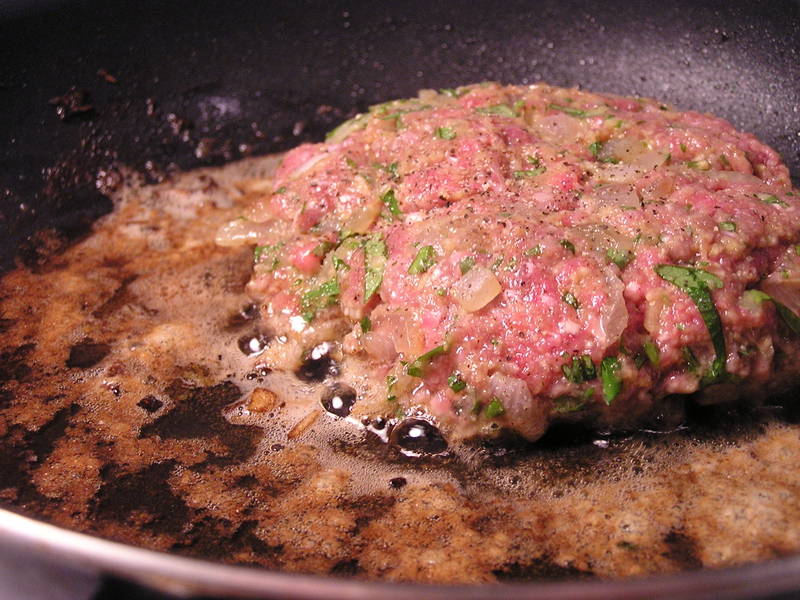 Toss the other two tablespoons of butter into the pan and quickly sear the steaks on both sides for a couple minutes on medium high.  It will look like a complete heart attack, and it probably is.   When the "steaks" have a nice little crisp of golden brown on each side, remove them to a plate. 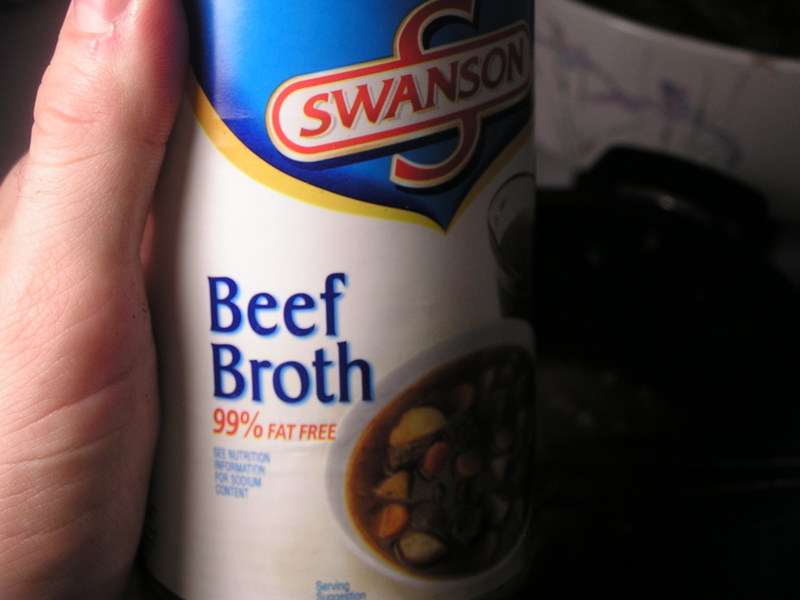 Dump the flour into the same pan with the butter and beef drippings and whisk it into the fat to create a roux over medium low hot.  Whisk until there are no clumps of flour left.  Then start slowly adding the beef broth, 4 ounces at a time, into the pan, still whisking.  Let each addition come to a simmer before adding more. 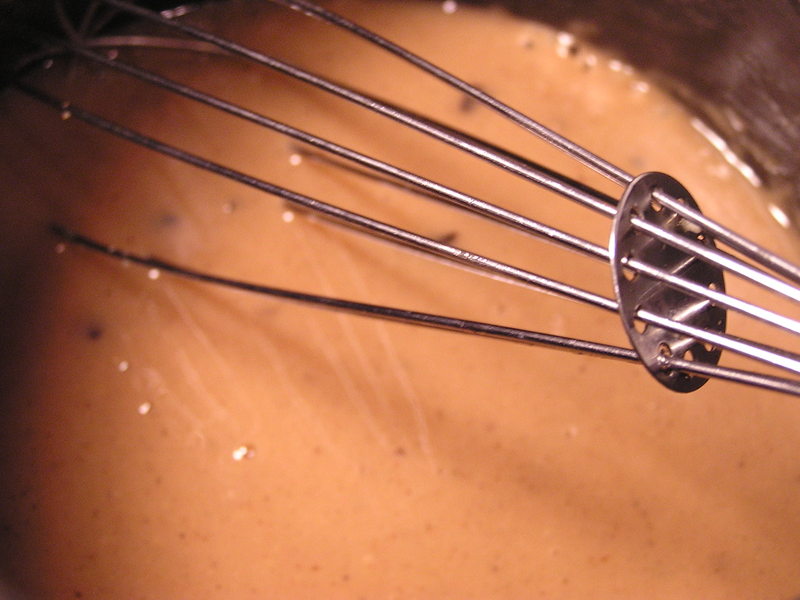 When all of the broth has been added, set the temperature to a medium low, or to whatever creates a slow simmer. 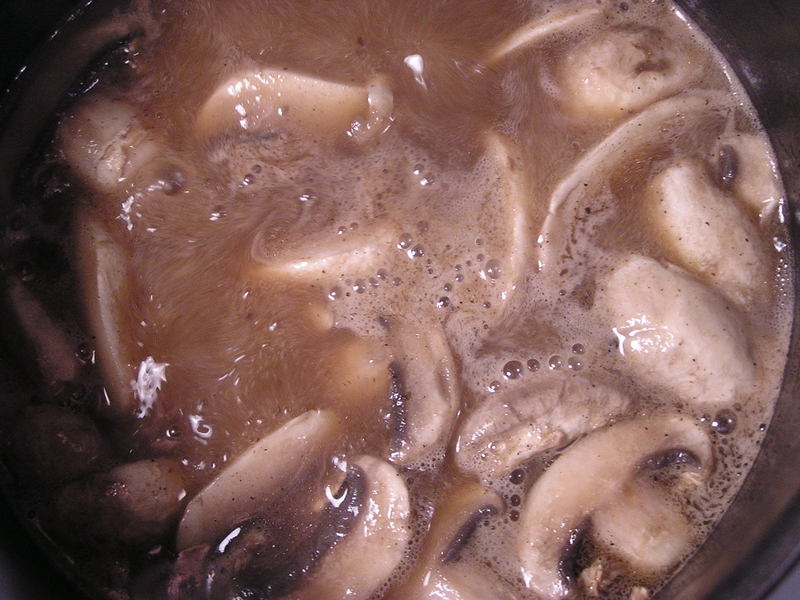 Add the cut mushrooms, and simmer for about 30 minutes. 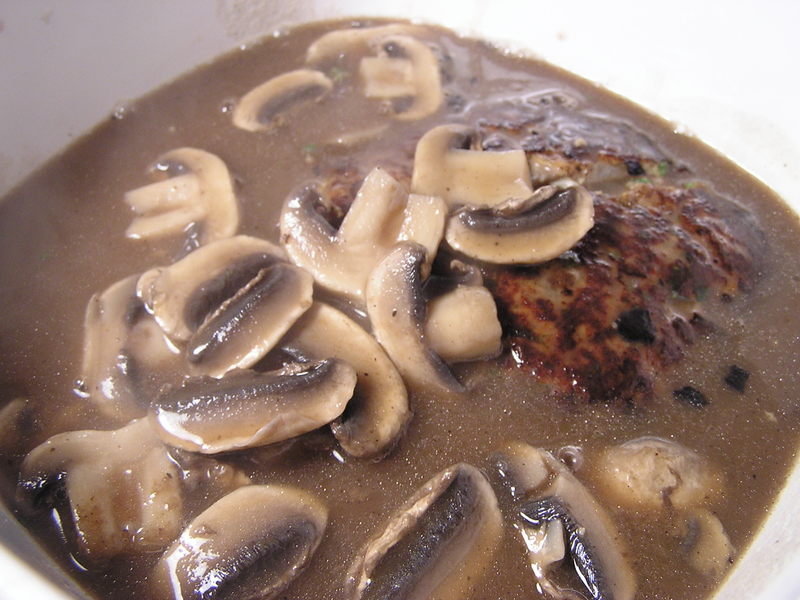 After the 30 minutes, add the gravy and mushrooms to a roasting pan and place into the hopefully preheated 375 degree oven.  Let that cook for 45 minutes. 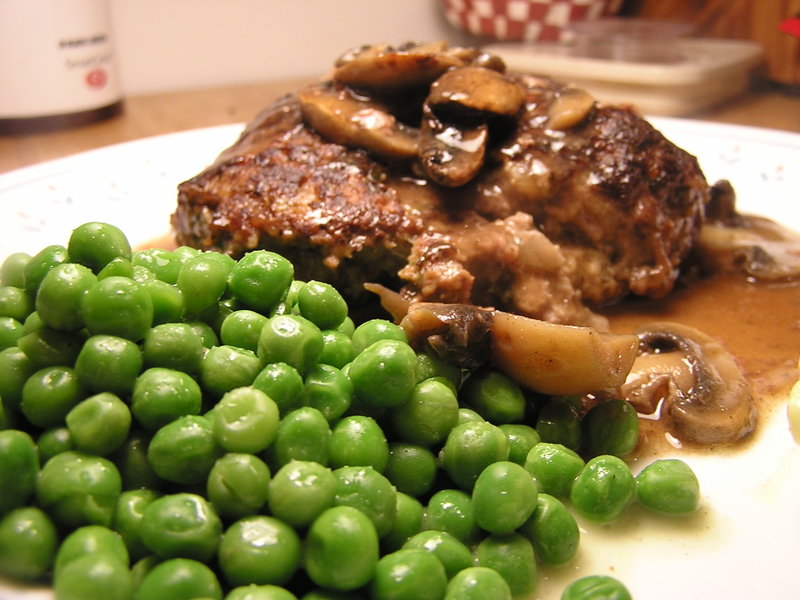 Remove the pan, heat up some frozen peas, and dish up with loads of the great gravy.  Really, the more the merrier.