A results of a simple dry-cured meat project revealed 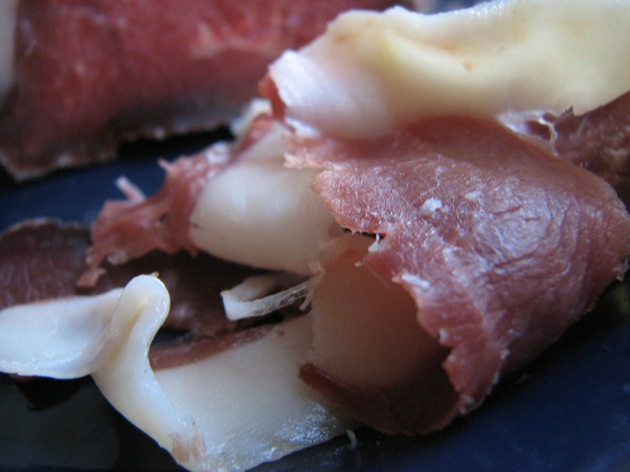 About ten days after I hung a salt-cured duck breast in the vestibule of my garden apartment, wrapped in cheesecloth and suspended by kitchen string in a little tent of wooden dowel rods, I retrieved it, unwrapped it, and laid it on a cutting board in my kitchen.  It was my first attempt at curing, my Duck Prosciutto .

The flesh had taken on a dark red, almost black color on the outside, and the fat had become yellowed.  The breast was firm throughout with no sign of any squishiness when squeezed. 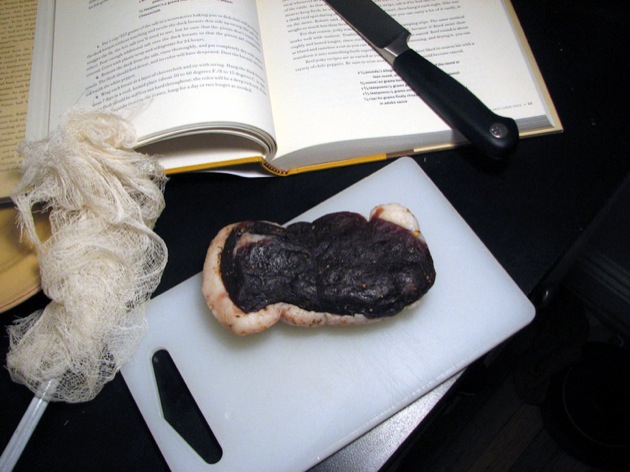 I took some deep breaths, and spent at least five minutes taking photographs from every angle, sniffing, inspecting, re-reading the directions from _ Charcuterie _ , and overall worrying that something had gone horribly wrong.

Clearly, I was nervous about cutting into it, half expecting rotted, gross meat under the smooth veneer.  After all, I have no idea what I'm doing.  This meat has never seen any heat--the "cooking" was done by salt and air.  I had followed directions carefully.  I was up nights worried about humidity levels.  It might have been too dry outside my apartment, which can lead to a hard exterior forming on the meat while the inside rots and putrefies.  It's also not good for the texture, which can end up hard and crusty.  And who knows what havoc the Brooklyn air had wreaked on this poor piece of meat?

I cut into it on an angle, into the fat side first, and slipped a piece onto my tongue. 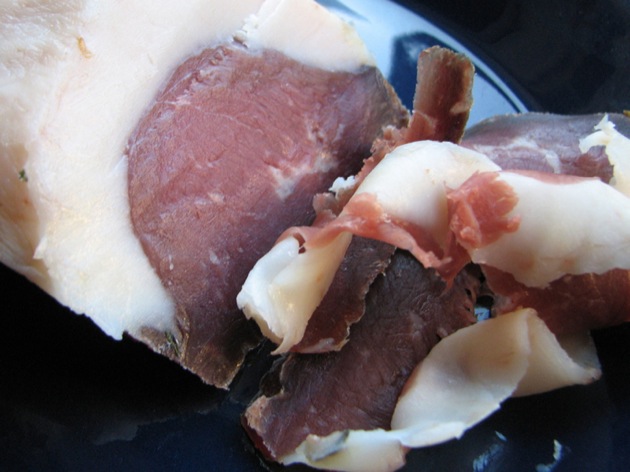 At first, all I could taste was the fat--which was of a very silky texture (duck fat is some of the best fat there is).  After the fat had melted, the meat was left to chew.  It is very full-flavored, and the gaminess of the duck comes through quite strongly, not a wholly pleasant thing.  There is an overall sense that the flavor is "porky"--even though there's no pig in sight.  It seems the flavors involved with salting and curing are strongly associated with pork (we have borrowed a pig term, "prosciutto," just to name this cured duck breast). In my opinion, the flavor of pig is best when it appears in curing products, but is that taste I love so much simply the result of curing and drying?  I'm curious to try this duck proscuitto next to some pig prosciutto and get a really close comparison.

But was it good, that taste?  Alone, the flavor of my duck prosciutto is almost too gamy for me--it would need the right strong cheese to balance it out (or would that be a mild cheese to absorb the intensity?), or maybe wrapped around melon like ordinary prosciutto, or with a salad with the right strong vinegar to brighten things.  I don't think I've achieved a good marriage between the texture of the meat and that of that fat--the fat is too soft while the meat is too chewy.  I think this is a humidity problem, as you can see from the pictures: there's dark line at the edges of the meat, which is the color it turns when dried out.  I also think it may have cured for a few days too long--with a piece this small, it doesn't need long.  I'm
tempted to trim off most of the fat and use it for something else, leaving just a thin layer to richen the taste.  Too much room-temperature fat in your mouth just isn't very appetizing.

What would happen if I fried up some cured duck fat in a pan?  Or laid it on a pizza to be broiled ?